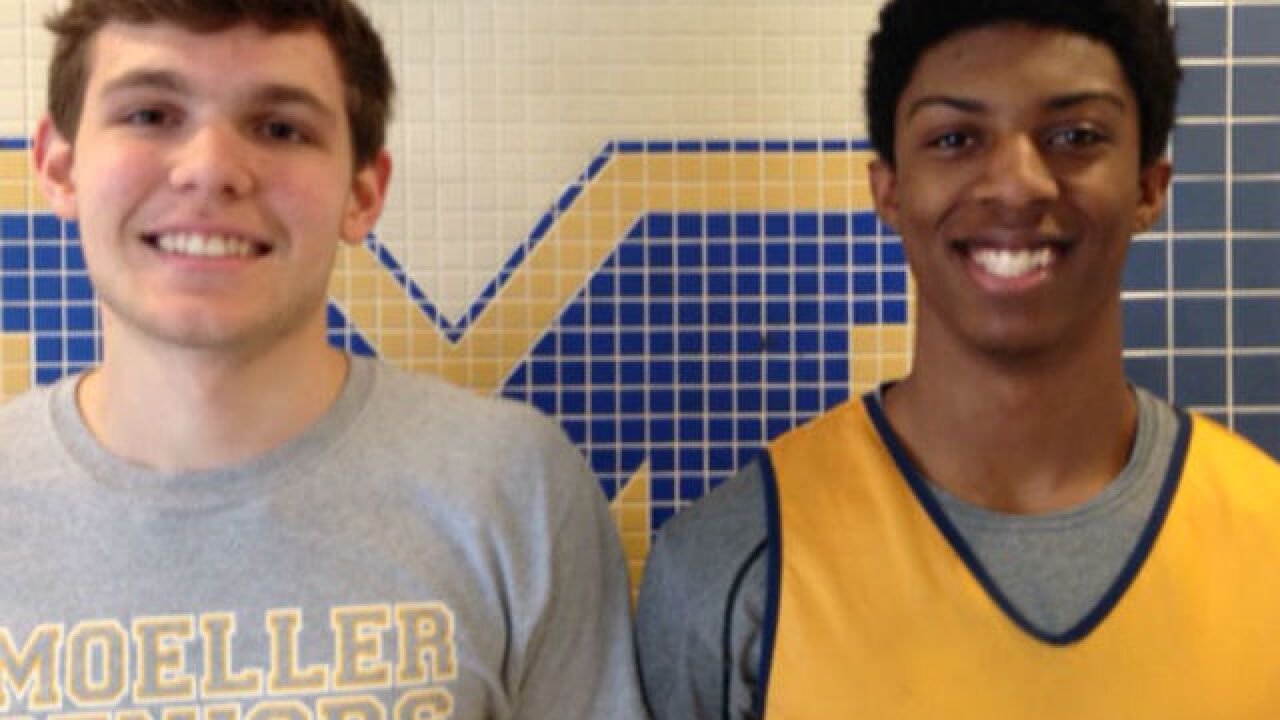 Copyright 2017 Scripps Media, Inc. All rights reserved. This material may not be published, broadcast, rewritten, or redistributed.
Mike Dyer

But these four-year varsity players aren’t complaining. They leave their ego at the door of every gym and arena.

As Moeller (27-0) prepares for its its Division I state semifinal Friday night in Columbus against Pickerington Central (26-2), you won’t find White or Geraci -- both 6-foot-4 senior forwards -- stewing on the bench.

In fact, it will be just the opposite.

“I am a role player and I am just trying to star in my role on the team and do what I can so the team can get better,” said White, who is being recruited by Ohio Northern and Hanover despite starting one game this season.

“If I was just about myself I probably would have left and gone to another school. I see that I will become a better person, a better overall player if I was helping out this team with my skill set off the court and in practice.”

Like his teammate, Geraci is ready at any moment of the game. He is one of 15 players allowed to dress for a tournament contest. He’s also a proud “Gold Team” member in practice.

“I think that’s what has been so special about this season,” Geraci said. “We’ve had the most competitive practices we’ve ever seen. Compared to last year these practices have been really competitive. I think we have a really strong Gold Team and that is part of the reason why we are at the position we’re at right now.”

Geraci, who is from Kenwood, also knows his most important mission is to look for tendencies and push his teammates, especially the forwards, during a timeout.

White, who is from Lebanon, likes to pump up his teammates before a game and bring energy throughout.

“I will go up to individual players and tell them what I am seeing,” Geraci said. “That’s an advantage of being on the bench. You get to see the game from a different perspective. And just motivating guys -- telling them what to look for on the court.”

Moeller is ranked No. 15 nationally by MaxPreps and was No. 1 in the final Associated Press statewide poll. The Crusaders are loaded with talent with starters who’ve all played 635 minutes or above this season.

But it’s guys like Geraci and White who’ve earned their way to the state Final Four this weekend, too. Moeller has had a Gold Team for years but it’s never included this many players.

Geraci and White are among nine Gold Team members who simulate the upcoming opponent in practice. The Gold Team devours film during the day and gets after their Blue Team counterparts in the gym in the afternoon. They want the coaches to take notice.

“Honestly, it’s a huge challenge at practice because it’s like a game for them,” said sophomore guard Miles McBride, who is a Blue Team member.

“They always have to run the plays and everything. They always take their time out of their day to come out here early with the coaches and learn the other team’s plays and all their system just to get us ready. It’s really humbling to know they are doing that hard work just for us.”

Moeller coach Carl Kremer -- who has led the program since the 1989-90 season -- has never had 18 players practice like this season. It has paid dividends he and his coaching staff couldn’t have imagined last spring.

He credited all his players after the regional final win over La Salle saying each player defined his role and helped prepare for a sixth state tournament trip to Columbus.

“I think if you talk to the last one they would all tell you they are having a blast,” Kremer said.

The Ohio High School Athletic Association has no limit for the amount of players who dress in the regular season. But when the tournament arrives, the number must be whittled down to 15.

The Moeller players and coaches had some fun selecting numbers in a mock draft for those who were able to dress. The seniors always dress for games.

“We believe that every kid really does want to be a part of something special,” Kremer said. “Something that is bigger than themselves. We believe that if you are honest with kids and you are straight with them from the beginning, kids will accept their role.”

McBride wasn’t surprised Moeller kept 18 players. The Gold Team takes pride in winning some of the drills in practice. In fact, they may know more about Pickerington Central than the Blue Team does this week.

“We wouldn’t be who we are without every player on this team,” senior guard Caleb Canter said. “Everybody brings something special to this team. So our success is a team success truly.”

Geraci said he’s having so much fun on this memorable journey to the state Final Four. He couldn’t have dreamed of a better way to complete his senior season.

And he’s never thought twice about how important his role has been this season in practice and in games. Like the starters, he wants a state title just as badly.

“I just love the culture here,” Geraci said. “I love all 17 of those guys in there. They’re my best friends. The coaches and the culture and the environment is something you can’t leave.”