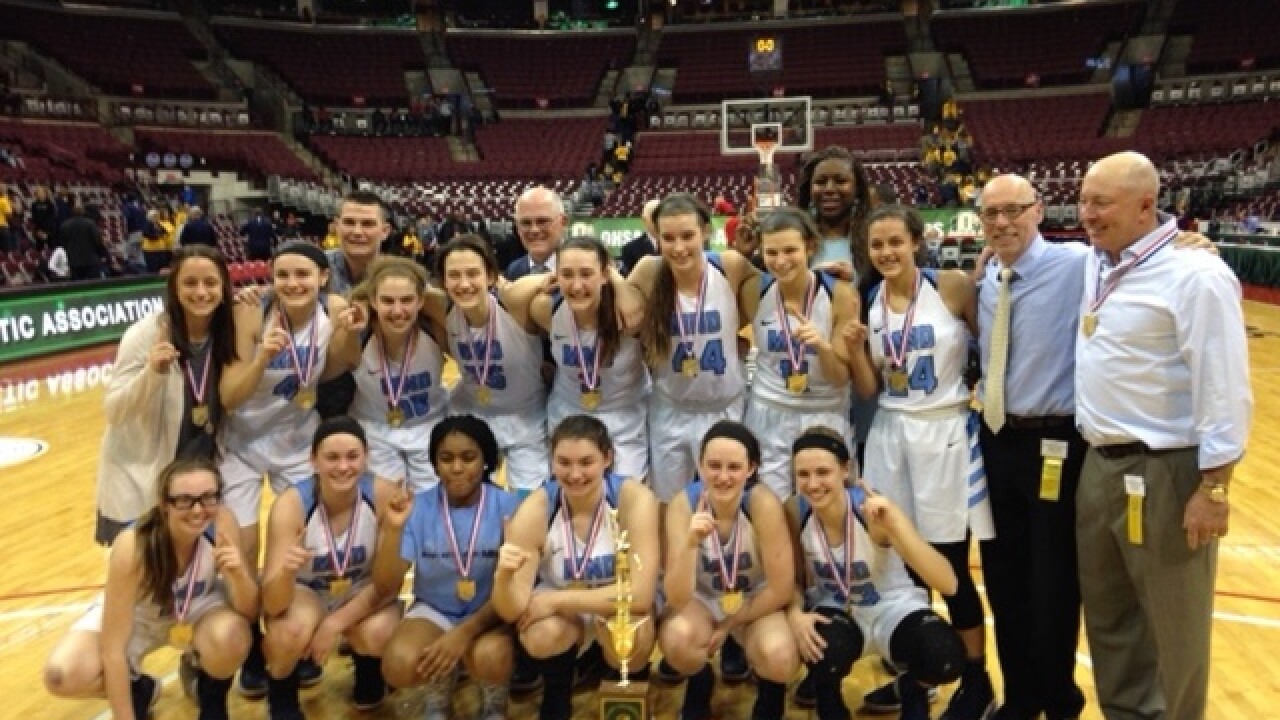 Copyright 2017 Scripps Media, Inc. All rights reserved. This material may not be published, broadcast, rewritten, or redistributed.
Mike Dyer | WCPO

The Cougars hoisted up the state championship trophy late Saturday night as a team, just as they played all postseason.

And in their cohesiveness MND added yet another layer to the program’s rich tradition.

“We’ve got special kids - that’s all I can say,” MND coach Dr. Scott Rogers said. “They rose to another level. They were able to get it done tonight. I am so proud of them.”

That ties the record for the most state girls’ basketball titles in Ohio High School Athletic Association history with Pickerington and South Euclid Regina. MND is the only active program among the three schools.

The Cougars (26-4) didn’t question their commitment to each other throughout the season.

Even when they lost starting point guard Makira Cook to a season-ending injury, the players stepped up for one another.

They kept the faith.

MND was led by several players in the state final, including senior forward Julia Hoefling, who had 18 points and seven rebounds.

Hoefling was nearly unstoppable in the paint all evening and made an excellent spin move with a left-handed shot.  She shot 8 of 14 from the field.

“I just tried to do my thing,” Hoefling said. “My point guard got it to me and I just finished.”

Sophomore point guard Gabbie Marshall had 12 points and three steals. She was 8-of-8 from the free-throw line.

The Cougars were well-prepared for the state Final Four. MND defeated Canton McKinley in the state semifinal Friday night.

“This something I’ve been dreaming of since freshman year,” Pisciotta said. “And for it to come true my senior year in my last game it’s an indescribable feeling. It’s awesome.”

MND persevered through an 11-4 first quarter deficit. MND went on an 11-0 run for more than four minutes in the second quarter and led 24-22 at halftime.

Marshall had two steals that resulted in easy layups to begin the third quarter and that in motion an MND advantage that never relinquished.

Toledo Notre Dame (26-4) got within four (42-38) with about four minutes left in the fourth quarter but Hoefling’s layup and Pisciotta’s two free throws extended the lead back to eight with 3:14 left and put the game out of reach.

MND was in the state final for the first time since 2009 when the Cougars won it all.

Friday was the eighth state tournament appearance for MND. The Cougars also won state basketball titles in ’08, ’07, ’06 and ’04.

"They started believing in the tournament and it kept rolling and rolling," Rogers said. "That's not me. That's them."

Rogers, who celebrated his 200th win at MND Friday night and 278th overall Saturday night, was the head coach for the 2004 and ’06 state titles and an assistant to Dante Harlan for the ’07 team.