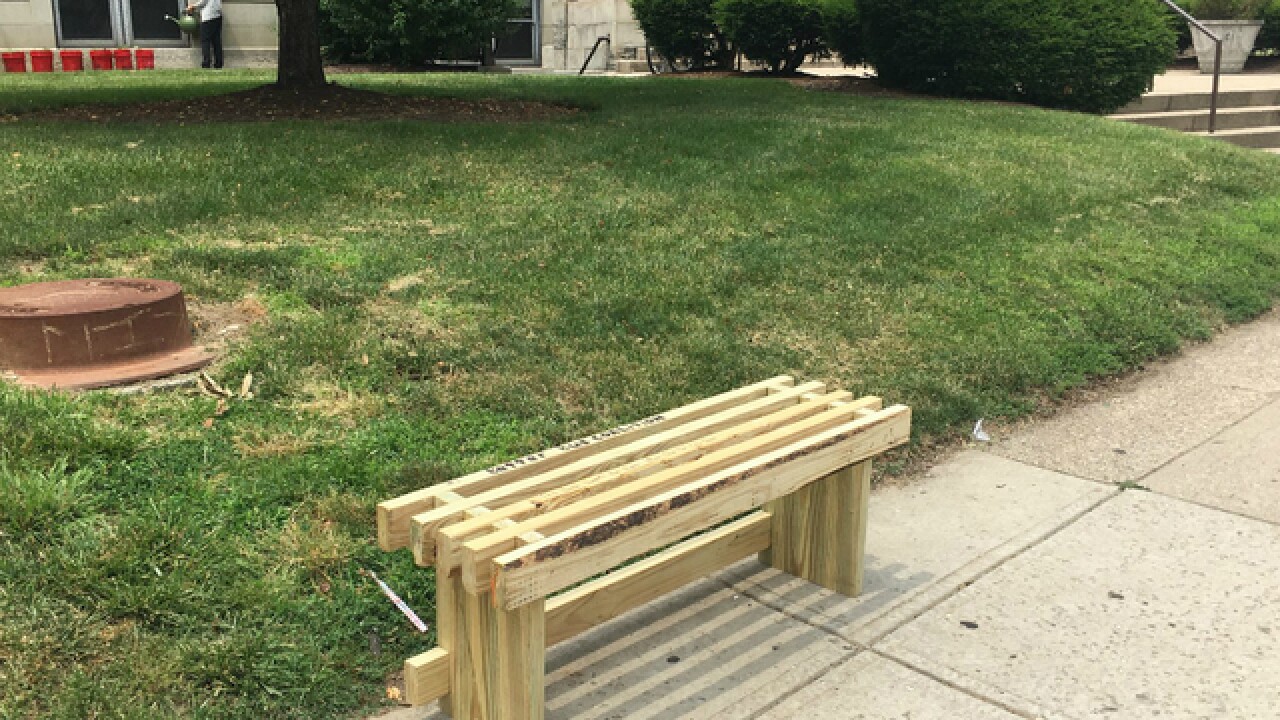 Copyright 2018 Scripps Media, Inc. All rights reserved. This material may not be published, broadcast, rewritten, or redistributed.
<p>CINCINNATI. June 8, 2018 -- The Better Bus Coalition placed this bench at the Cincinnati Metro bus stop by the public library on Hamilton Avenue in Northside. (Provided)</p>

CINCINNATI -- Little benches are popping up around the city, carrying what organizers hope will be a loud message.

Handwritten in permanent marker across each of the handmade, unpainted benches' seats, the message reads, "This bench supports bus riders more than the city does."

Hardy said the benches' small, practical design represents the simplicity of what his coalition is requesting.

"This is not rocket science," he told WCPO. "We just want people to be comfortable while waiting on buses.

"It's just a way to make our bus system a little more presentable to some new riders or even the current riders we have now."

When Allie Graff first saw Hardy post about the benches on social media, she knew it would help her nearby bus stop -- and the other people who use it.

The 27-year-old lives in Cincinnati's CUF neighborhood and works for the Greater Cincinnati Homeless Coalition in Over-the-Rhine. She regularly rides Metro routes 17, 31 and 64. It was the bus stop at West McMicken and Kottman avenues where Graff said the Better Bus Coalition could help.

"I'm really fortunate that I am very close to (my main routes), so if I miss the bus, I can just go back into the house," she told WCPO.

But when she saw her elderly neighbor waiting for the bus, she knew the stop needed a place for him to sit. Not only is there no bench or shelter, but the bus stop is located on a hillside, with no sidewalk.

"You can't sit to wait for the bus," she said. "Especially someone with a cane, not being able to sit and wait on the bus -- your feet hurt just from waiting. Or when you're coming home at the end of a long day and maybe you have a transfer that day for some reason."

Graff agrees that the need is not a complex one and sees the lack of benches as a form of ableism.

"Ableism is so prevalent, and it's pretty obvious to me that not everybody can walk home," she said. "It seems so obvious. Shelters should shelter you from the rain, and there should be a resting space."

Hardy said his team used bus ridership data acquired from the Southwest Ohio Regional Transit Authority -- which owns and operates Metro -- to identify stops with high ridership but no current benches or shelters for riders waiting.

"Maybe more than 150 bus stops we've identified needing benches, and there are probably more," he said.

Hardy said the Better Bus Coalition is focused primarily on urging the city and county to adjust their bus funding structure: "The bigger issue off of this is that we need the city and the county to invest into Metro," he said. "They're funding a 2018 bus system with 1970s money."

Metro's primary source of funding comes from a small portion of the city of Cincinnati's earnings tax -- 0.3 percent of the tax goes toward roughly half of Metro's $100 million annual budget. That funding structure was approved in 1978 and has not been revised since. As a result, Metro officials have warned of a looming $150 million budget shortfall over the next decade if they can't find a new permanent source of funding.

One proposed solution is a countywide sales tax levy to fund Metro bus service. SORTA has until August to recommend a sales tax increase for it to appear on November's ballot.

Donations to the Better Bus Coalition "have skyrocketed" since they began installing the benches, Hardy said.

Hardy said he spoke with a representative from the city manager's office, who said "they appreciate what (the Better Bus Coalition) is doing."

City spokesperson Casey Weldon told WCPO in a statement, "The City does not have a problem with placing benches in the right-of-way; however, benches or any other items placed in the right-of-way have to meet the guidelines outlined in the Cincinnati Municipal Code."

Code requires that any person or organization wishing to place a bench must have the request reviewed by the Department of Transportation and Engineering. Weldon did not indicate if the DOTE reviewed these benches' placement.

Hardy said he had not heard from SORTA on the matter. SORTA spokesperson Brandy Jones told WCPO via email that the transit agency did not have a comment on the benches.

Hardy's logic is, "We feel this is something we should do, and it's in our hearts to do it. The city is donating the bus stop to us, and we are charged with upkeeping it (sic)."

Concern over bus stop benches began to surface in the fall of 2016 when residents and bus riders started to notice some benches disappearing from their nearby stops. As WCPO has previously reported, the bench removals were part of a plan approved in 2009 that banned on-bench advertising in the city. In 2013, the city began removing benches that violated that rule.

But after more than 30 emails flooded Mayor John Cranley and City Council's inboxes, the council approved a motion in October 2016 that halted bench removal until the administration could secure legal replacements.

By the time City Council approved its motion to halt bench removal, the city had lost nearly 70 benches in at least five neighborhoods.

According to Jones, SORTA in August 2017 approved a new contract with Clean Zone Marketing to allow some advertising to fund new bench and shelter installation, with the city's permission, but in April 2018 they issued to the vendor a notice of default on that contract. The contract called for 20 new shelters and 60 new benches, but none have been installed.

For now, Graff said she's happy to see the pop-up benches arriving around the city.

"I finally noticed one on my route and it was really exciting," she said. "I can very much appreciate that there are people who are going to use a bench when they've never gotten to use a bench before."

The Better Bus Coalition officially will kick off its fundraising efforts at the Church in Oakley event center on Saturday, June 16.