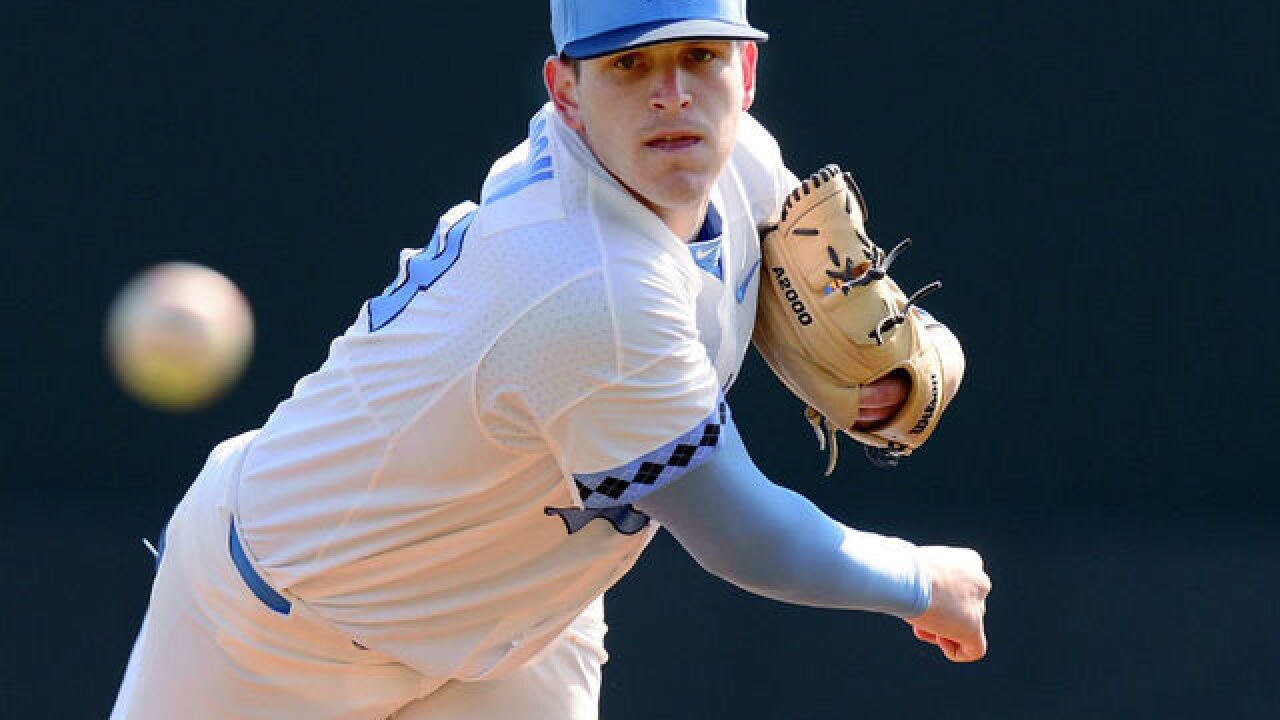 Copyright 2018 Scripps Media, Inc. All rights reserved. This material may not be published, broadcast, rewritten, or redistributed.
<p>University of North Carolina pitcher Rodney Hutchison will be in Omaha this weekend as the Tar Heels play Oregon State Saturday afternoon in the College World Series. Hutchison, a 2015 Mason High School graduate, was drafted by the New York Yankees in the sixth round last week. (Photo by UNC Athletic Communications)</p>

Hutchison, a junior right-handed relief pitcher at the University of North Carolina and 2015 Mason High School graduate, is in Omaha preparing for Saturday’s College World Series opener against Oregon State at 3 p.m. ET on ESPN.

On June 5, the New York Yankees selected the 6-foot-6 Hutchison, a lifelong Bronx Bombers fan, in the sixth round (187th pick overall) in the Major League Baseball Draft.

“Watching him perform well and see his team get to Omaha the same week he gets drafted by the Yankees, it’s pretty special,” Mason coach Curt Bly said.

Hutchison, who was once referred to as a "thoroughbred" by former Mason coach Ken Gray, may be the first Mason alum to be in the College World Series in more than 40 years.

Gray, who coached the Comets for 39 seasons before Bly took over in 2014, doesn't recall another Mason alum being in the College World Series.

Hutchison loved everything about baseball and its process, according to his former high school coaches.

“We talk about legacy players in our program and trying to grow those guys and he’s certainly one of those guys we’ve had," Bly said. "I couldn't be more proud or excited for him for the opportunity to go play for a national championship."

Hutchison’s agent is scheduled to fly to Omaha to work out contract details with the Yankees, but Hutchison told WCPO he’s purely focused on the Tar Heels this weekend.

Hutchison, 21, was one of three former Mason High School players to be drafted last week. The Cincinnati Reds drafted Virginia Tech pitcher Andrew McDonald , a 2013 Mason graduate, in the ninth round, and the Red Sox drafted 2018 graduate Nick Northcut in the 11th round.

For Hutchison, being drafted by New York was extra special. Tears rolled down his face when he received the phone call last week from the Yankees.

A Derek Jeter fan growing up, Hutchison visited Old Yankee Stadium with his family as a youngster. He became attached to the pinstripes.

“It was literally a dream come true,” Hutchison said. “To call my dad, my mom and my sisters – we were all crying happy tears because not only am I getting an opportunity to play professional baseball but it’s for our favorite organization, the New York Yankees.”

For his parents, Rodney and Stephani Hutchison, and his sisters, Olivia and Margo, the call from the Yankees represented a culmination of the time and effort Rodney Jr. has put into the game over the years.

It certainly has been a challenge at times in Chapel Hill, but Hutchison said he looked in the mirror his freshman season and made a commitment to take his pitching to another level. He changed his mechanics a bit, continued to mature and led the team in appearances as a sophomore while being the go-to pitcher in the bullpen. He also has excelled in the Cape Cod League .

“I am extremely proud,” Stephani Hutchison said. “He is such a hard worker. It seems like he’s always wanted to do everything the right way.”

Hutchison, who is mostly a reliever, has played a key role on the mound. He stepped in as a starter earlier this season when North Carolina starter Gianluca Dalatri was injured. Hutchison transitioned back to the bullpen in the latter portion of the season when Dalatri returned.

“Whatever the coaches call me to do, I will,” Hutchison said. “Whatever it is that will help us win games, I will be happy to do that.”

It’s always a question mark when Hutchison may pitch, but his mindset is that he’s prepared to throw every game – whether as a fourth starter, a long reliever or in the back end of the bullpen.

“I will put the personal statistics away when we are one of the final eight teams and I feel like we really have a shot to win the national championship,” Hutchison said.

Hutchison has a fastball, slider, curve and change. He has added velocity to his fastball and is up in the mid-90s now, Bly said.

Hutchison also has been impressive mixing up his tempo in the wind-up and delivery to impact the timing and rhythm of hitters.

But, most importantly, Bly has been impressed with Hutchison’s team-first approach to winning.

“It’s been a ride here and it’s been the best three years of my life,” Hutchison said. “North Carolina is the best thing that has ever happened to me, so I can’t thank the coaches and the university enough for the opportunity they have given me.”