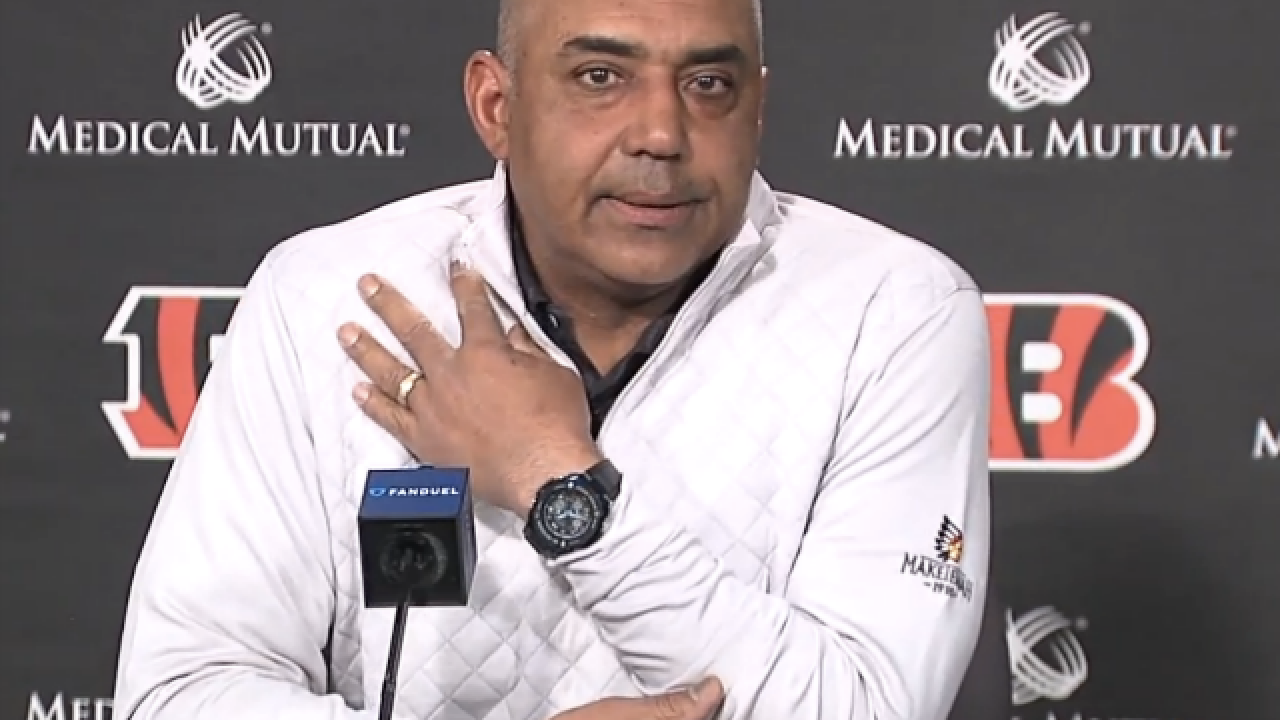 Copyright 2018 Scripps Media, Inc. All rights reserved. This material may not be published, broadcast, rewritten, or redistributed.
<p>Marvin Lewis speaks at a news conference in January at Paul Brown Stadium.</p>

CINCINNATI -- Marvin Lewis was adamant during his pre-NFL draft news conference Tuesday that he never made any demands regarding personnel decisions while negotiating his contract at the end of the season.

The Cincinnati Bengals head coach said the organization knew it "had to make changes" this offseason, and that's what has happened with an overhaul in the staff and the addition of a few potential impact players.

Now, as the Bengals prepare for the draft, fans will see how far the changes go in the roster-building process. The first pick arrives at No. 21 on Thursday night.

"The moves we've made this offseason have kept things wide open for us, which is good, and that's what our anticipation was in the moves we made previously in the late winter/early spring to get us to this point," Lewis said Tuesday during a news conference at Paul Brown Stadium.

RELATED: Bengals' Mixon: NFL draft day wait was long but worth it

Like most other teams, the Bengals still have their areas of greatest need, specifically at center to replace departed Russell Bodine and at quarterback with backup AJ McCarron gone, but the club's direction will depend on who is available and how the Bengals value those players.

This also is the first draft with Bill Lazor as offensive coordinator after he replaced Ken Zampese following a Week 2 loss during the 2017 season.

Lewis said his assistants all have a chance to provide opinions on prospects and noted that having two new coordinators especially could impact the tone of the conversations in the draft room. Ultimately, though, he has the first and last word.

"It's a new and different mentality because their experiences are new and different," Lewis said. "They have the ability to put their influence into the process with how they see things with their input. That's going to be important. (Offensive coordinator) Bill (Lazor) has been here for two years, so he has a little bit of an idea. (Defensive coordinator) Teryl (Austin) is brand-new in being here. It starts with the things that are important for me first off, and then we go forward from there."

Lewis would not specify whether Austin and Lazor value different types of players than their predecessors but said it's more important they are all on the same page.

"I think we are aligned that way," Lewis said. "Guys we feel are smart enough, fast enough and physical enough are going to come into this building. Those are the values that are important to us."

Body types and skill sets at many of the positions have changed over the years, and Lewis said organizations value different things when looking at players, so it's hard to say what areas of this draft pool are deepest and which are the skimpiest.

Linebackers are bigger and faster now than in 1992 when Lewis entered the league as a coach, but they don't seem to last as long, and spread offenses have changed the types of players coming out of college on the offensive side as well.

"We've gone through a process with the evolution of college football where linemen are way different," Lewis said. "The offensive linemen are way different than they used to be. Contrary to that, the defensive players come here with a different mentality and ability to play open-field football more often. I'm not sure there's as many highly ranked defensive backs (this year), compared to recent years. Everyone sees things differently. The prospects are who they are. There are going to be the 300 or so players drafted, and we are going to go from there."

Not surprisingly, Lewis didn't let on to what the Bengals might try to do with their first picks. When asked if teams are more secretive now than they used to be, he said it doesn't make any sense for anyone to talk about specific players ahead of the draft unless they are picking first.

Lewis insists he doesn't even try to project what teams ahead of them in the draft order will do.

"We go through the process, do the evaluations, stack the board and continue to pick the player. If (you end up with a list of) a smaller number of players, then maybe there's an urgency to move up and get a certain guy. But other than that, you are going to let things fall the way they may."