Bengals running back Joe Mixon: NFL Draft day wait was long but worth it 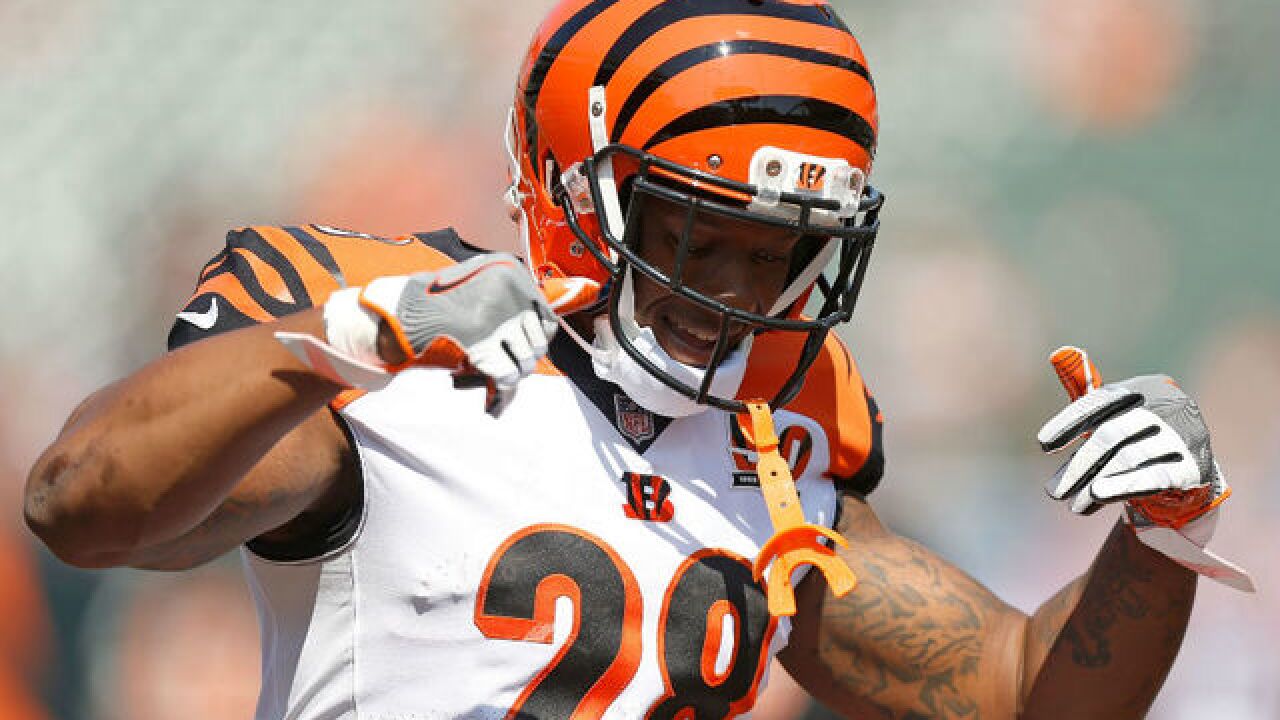 Image copyright 2017 Getty Images. All rights reserved. This material may not be published, broadcast, rewritten, or redistributed.
Michael Reaves | Getty Images
<p>Joe Mixon #28 of the Cincinnati Bengals warms up prior to the start of the game against the Baltimore Ravens at Paul Brown Stadium on Sept. 10, 2017 in Cincinnati, Ohio. (Michael Reaves/Getty Images)</p>

CINCINNATI -- This time last year, Joe Mixon was anxiously awaiting some clarity on his future.

The running back out of Oklahoma became the Bengals’ second-round draft pick in 2017, and he says now it feels like yesterday that he was hearing his name called off the board.

With the 2018 draft coming up Thursday through Sunday, Mixon is glad to be watching casually from afar to find out who his new teammates will be.

“It was definitely super overwhelming, but I made it here and I'm blessed to be here, so I can't take anything away from the decision that was made,” Mixon said while at Paul Brown Stadium on Monday for the Bengals’ voluntary offseason workout program.

Mixon said he doesn’t know much about the draft pool this year except for his former teammates at Oklahoma. He looks forward to seeing where they all land, noting he hopes Sooners quarterback Baker Mayfield goes No. 1 overall.

That would mean he would see his old teammate twice a year in games against the Cleveland Browns. Mixon said the next-best scenario of joining up again in the same locker room isn’t realistic: The Bengals’ first pick is at No. 21, and although they may be looking for a new backup to replace AJ McCarron, the quarterback position likely is not that high on their list.

SI.com’s Peter King appears to be the only one predicting the Bengals to go that route, putting Lamar Jackson in that No. 21 slot in his latest mock draft, but he has Mayfield going off the board at No. 4.

Going into last year’s draft, most people projected Mixon to go in the second round, which he did. But that didn’t make waiting any easier.

“I tell them just to stay busy because it's definitely a long process during the day,” Mixon said when asked what advice he gives to old teammates. “For the most part just stay active, get your mind off it, and then you'll get the call -- that's when it's going to come.”

The draft process was in part a big ordeal for Mixon because his character came into question over an incident from July 2014, just prior to his freshman season, when he was caught on camera punching and knocking out a woman after a brief confrontation at a restaurant.

Since joining the Bengals, he has done everything he could to prove himself to his new team. Despite a slow start, he developed into the team’s go-to back, finishing with 626 yards and four touchdowns while running behind a struggling offensive line.

Things should come more easily this time around after getting a year of experience and a full offseason with the team.

“I know what to expect, whether it's in the meeting rooms or going out for workouts, being around my teammates in the locker room or on the field,” Mixon said. “Being around the coaches, I know they coach and how they coach me and take things in and stuff like that. We're all looking forward to getting out and getting ready for the season and looking for the draft picks coming in and see who we get and things like that. We're definitely very excited. It's a new season. Everybody is 0-0, and we're looking to work from there.”

Mixon came back to Cincinnati almost 15 pounds lighter than when he first arrived. He checked into rookie minicamp last year at around 238 pounds and is now sitting at 225, thanks to his efforts to slim down this offseason. However, the 6-foot-1-inch back from Oakley, California, still hopes to lose five more pounds.

“I just felt like I wanted to try something new, try to get back to my old college days with my weight,” he said. “I'm figuring out how my body works and stuff like that, but hopefully it makes me faster and more explosive.”

Mixon is hoping owners during the spring league meeting May 21-23 table the idea of possible disqualifications for when players lower their head to initiate contact with the helmet.

He said he will follow whatever rules are in place as best he can, but as a running back, it’s difficult to not drop his head and lead with his shoulders when an opponent comes in for a tackle.

“I'm going to do what I do and do what I can and whatever I've got to do, but at the same time I'm going to do whatever I can to be successful on the field,” Mixon said. “If it's something I've got to put my head down to get the first down, I'm going to do that. I'm sure a lot of flags will be called if that's the case. … That's like saying [Bengals linebacker] Jordan Evans is going to tackle me and I can't put my head down and he's way taller than me. He tackles me, and my neck dissolves. There are going to be a lot of injuries that way, and that's not playing football.”

Whatever happens with the rules, Mixon said he has “lots of tools” in his arsenal to catch opponents off guard, so he hopes to be more effective in his second year.