Love the Tri-State's trails? Here's who you need to thank 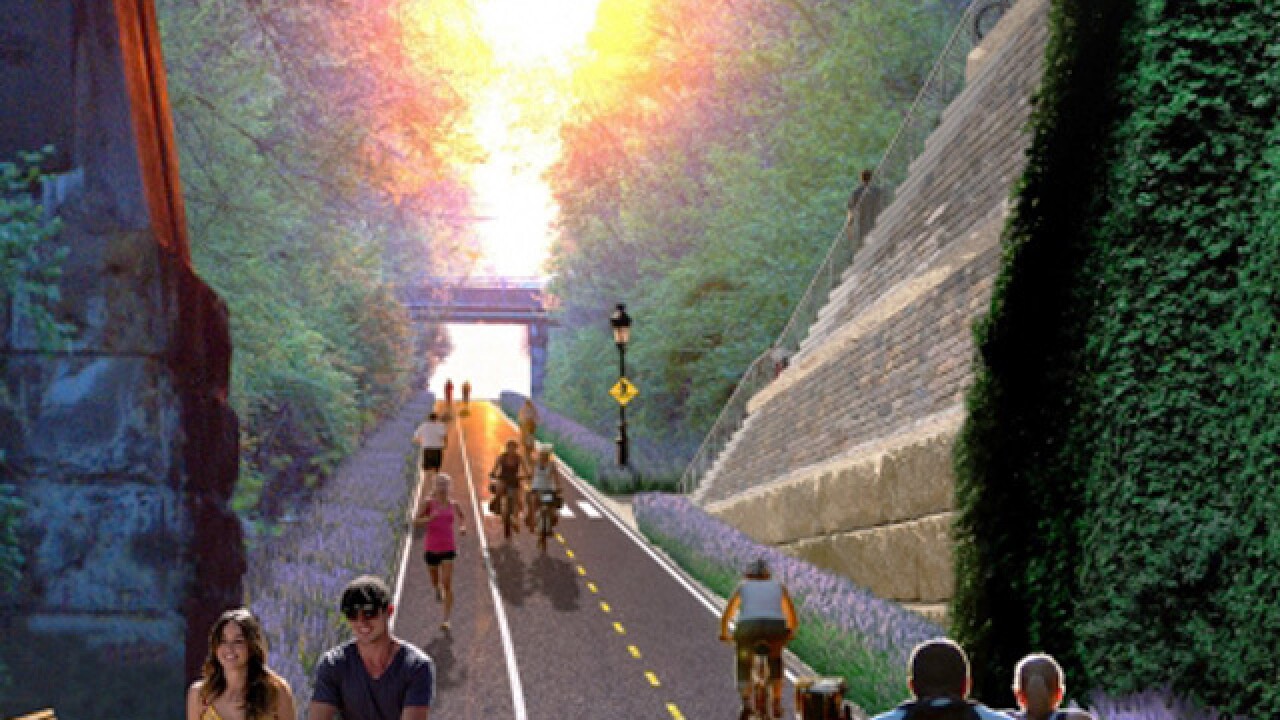 <p>A rendering of the proposed Wasson Way trail under Erie Avenue. The grassroots organization pushing for the project has emphasized community involvement with the project. Wasson Way photo </p>

Robin Carothers has had trails on the brain for decades.

"It's a public health and safety and an environmental issue," she said.

Carothers is the founding and current executive director of Groundwork Cincinnati - Mill Creek, a nonprofit she spearheaded more than 20 years ago. Groundwork focuses on youth and environmental education; restoring and maintaining area rivers, watersheds and their natural resources; building trails; and revitalizing neighborhoods within the West Side's Mill Creek corridor -- which touches more than 40 of Cincinnati's 52 neighborhoods.

She's had such an impact, in fact, that the regional trail-advocacy coalition Tri-State Trails presented her with one of three 2016 Trail Awards during its annual Regional Trails Summit, held Friday at the Cincinnati Zoo and Botanical Garden. She also served as a panelist during Friday's summit.

Most recently, Carothers turned the heads of trail advocates across the Midwest when she unveiled late last year the ambitious Cincinnati Connects initiative, which would connect, initially, four major, currently underway trail projects spread across the Tri-State to form a 42-mile, 32-neighborhood loop. For some perspective, the initial phase of the proposed trail network would connect the Mill Creek Valley to Lunken Airport and Armleder Park in the East End.

She calls the proposal "a people-friendly transportation alternative" meant to "provide safe and accessible routes for people of all ages, incomes and abilities" to jobs, schools, medical facilities, parks and entertainment.

This was a point Carothers made sure to move discussion to during her panel Friday, titled "Balancing the Active Transportation Network": "We have an obligation to provide children in underserved communities with a safe route to places to play," she told the more than 150-person audience.

"For Cincinnati Connects, the sum is greater than its parts. The urban loop trail is a big idea that could make Cincinnati one of the top pedestrian and bicycle communities in the country," she said when unveiling the proposal last year -- one that has the express support of multiple members of City Council, including Vice Mayor David Mann, who spoke at the unveiling.

As if leading the charge to connect the region's currently disconnected trails isn't enough, Carothers' work with Groundwork Cincinnati - Mill Creek includes coordinating the development of the Mill Creek Greenway Trail, which is one of four major trails the initial 42-mile loop would connect, along with the Ohio River West Trail, the Oasis River Trail and the Wasson Way trail. In addition to finishing construction on these four major trails, the plan calls for six smaller connector trails to complete the loop.

It's an 11.5-mile walking and biking path that will ultimately connect the six so-called "Southbank" cities along the Ohio River: Ludlow, Covington, Newport, Bellevue, Dayton and Fort Thomas. The trail's connectivity to the Purple People Bridge in Newport will mean the Riverfront Commons project integrates seamlessly with already installed bike routes north of the river.

The Riverfront Commons project was initiated by Southbank Partners, a Northern Kentucky economic development collaborative, which gave out more than $7 million in grants just last year.

"The interesting piece of this project is that we'll have a park on the East Side and then we'll have all the amenities of the urban core, and then end at Devou Park in the west," said Southbank Partners President Jack Moreland, during Friday's summit.

"It doesn't get any better than that."

In 2015, then-Kentucky Governor Steve Beshear awarded Covington and Dayton $4.5 million and $530,000 respectively in grant money toward their portions of the trail project. Covington City Commissioner Chuck Eilerman told WCPO last fall that the city has also set aside roughly $3 million toward the project in its capital improvements budget.

"We can't compete with Smale Park," Eilerman said. "But we can do a lot, and that's what we intend to do."

Ultimately, all of these projects would be hard pressed to get rolling if it weren't for the summit's third and final award-winner: the Ohio-Kentucky-Indiana Regional Council of Governments, a council comprised of local governments, business organizations and community advocates that help trail projects like these coordinate, plan and find funding.

"We have one thing going for us here. We have growth that's sustainable," said Mark Policinski, CEO of OKI, to open Friday's summit. "OKI is proud to work with Tri-State Trails in promoting active transportation options through all of our communities."