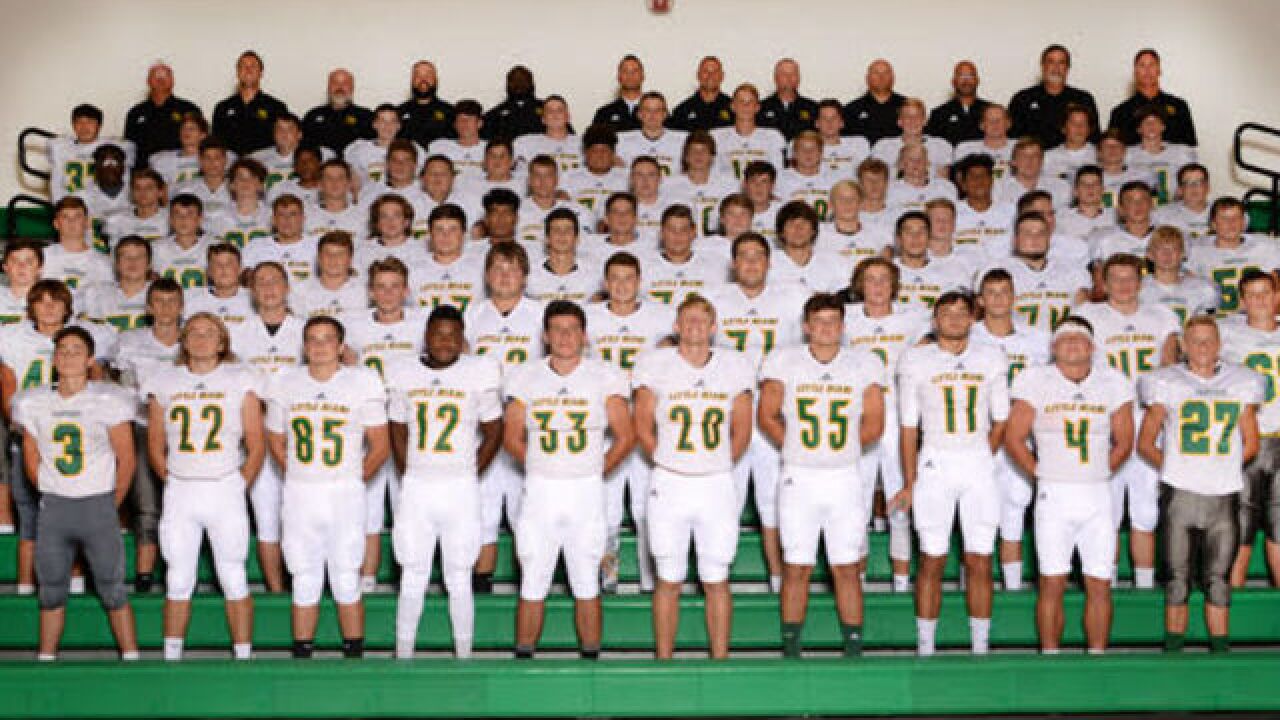 Copyright 2018 Scripps Media, Inc. All rights reserved. This material may not be published, broadcast, rewritten, or redistributed.
<p>Little Miami's football team is projected to make the playoffs for the first time since 1992. (Provided photo)</p>

MORROW, Ohio – Little Miami football coach Nate Mahon was in the middle of a postgame interview Friday night when he was suddenly interrupted.

“’You can’t dream this,’” a passer-by shouted away from the camera. “Little Miami in the playoffs. Let’s go!”

Mahon couldn’t help but smile after losing his train of thought. As hashtag #PanthersRising has said all season, the Panthers are indeed ascending as a program and are likely going to the playoffs next week.

“I am going to enjoy this one tonight,” Mahon said.

Coach Mahon after tonight’s win puts @LMPanthersFB in the playoffs for the first time in 26 years: “We’re building a program the right way.” @swocsports @MikeDyer pic.twitter.com/9wZqEmL86D

The Panthers are projected to make the postseason for the first time since 1992 – the only other time they reached the playoffs, according to the Ohio High School Athletic Association.

Little Miami defeated visiting Western Hills 45-12 Friday night. It was the sixth time this season Little Miami scored 45-plus points in a game.

Junior quarterback Brody Reder threw for 129 yards and a touchdown. Senior running backs Trent Dawson and Lucas Patten each had rushing touchdowns. Senior Cordell Oeder had a 66-yard punt return for a touchdown in the third quarter.

“It’s been 27 years since we have been to the playoffs and I can’t wait to go check some scores,” Mahon said. “It’s exciting.”

Little Miami (8-2), the No. 5 seed in Division II, Region 8, is projected to play at Southwest Ohio Conference opponent and No. 4 seed Edgewood (8-2) at 7 p.m. Nov. 2. Edgewood defeated visiting Little Miami 20-0 Oct. 19 so this will be the second time in three weeks the teams have played.

The Panthers know the opportunity in front of them. The school community has been waiting for this moment.

“The guys who have played in the past and the guys who have got this thing going the past couple of years have bought in,” Mahon said. “We are building the program the right way. Hard work wins.”

The significance is palpable for the players, too.

Dawson said he could feel the energy around school this season.

"It’s awesome," Dawson said in September. "It’s something in my four years being in the school – I have not seen this at all. I hope it stays even after we leave.”

The postseason is something the program has worked toward all offseason.

“It would mean making history at our school because we always talk about the previous teams that had a chance at the playoffs,” Little Miami senior offensive lineman Hunter Fletcher told WCPO in September.

“Making the playoffs would be huge for our school, our team and our program and I am sure for our coaches it would definitely mean a lot. From my standpoint, I feel like it would make feel like my high school career has been successful.”

The final OHSAA computer ratings will be posted late Saturday around midnight, but it could be later if there are any game delays or technical issues. Schools have until 10 a.m. Sunday to report any possible mistakes in the ratings. Unless there is a discrepancy, the ratings become official at noon Sunday.

There were 717 high schools playing varsity football in Ohio this season. There will be 224 playoff qualifiers announced Sunday.

The playoffs start Nov. 2 with Divisions I, II, III and VI. Divisions IV, V and VII play on Nov. 3. All playoff games before the state finals kick off at 7 p.m.