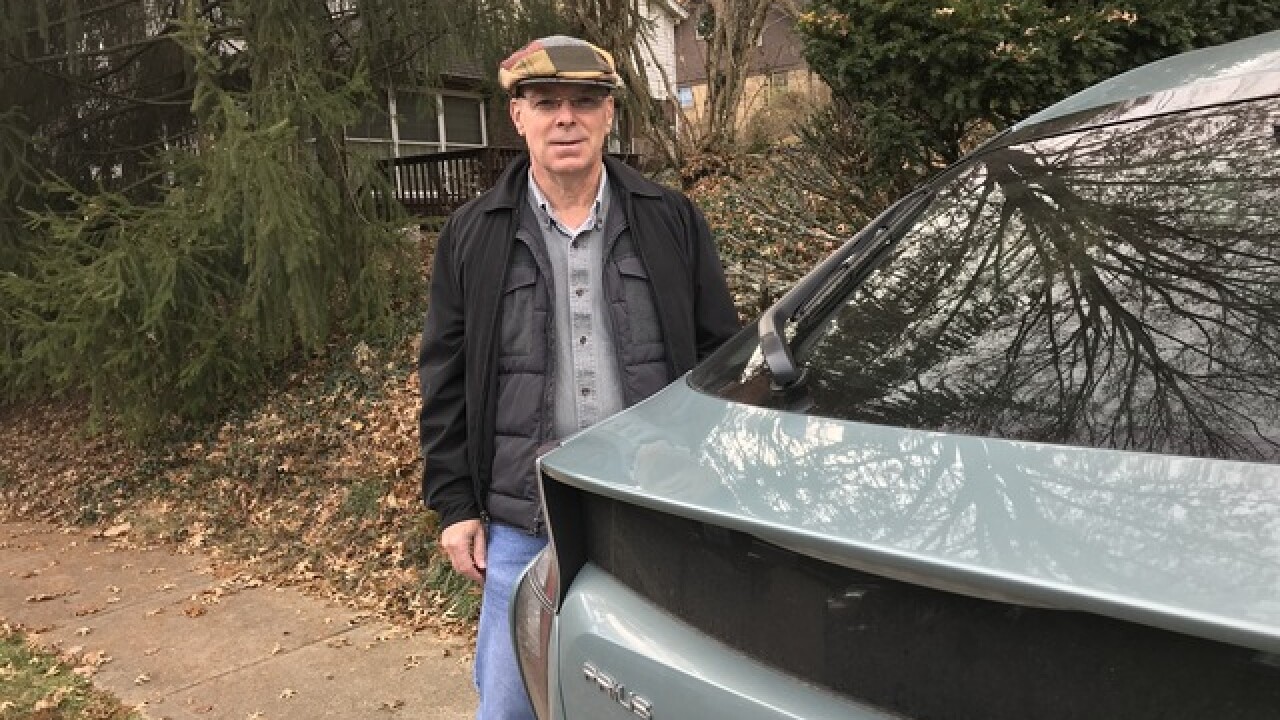 Copyright 2017 Scripps Media, Inc. All rights reserved. This material may not be published, broadcast, rewritten, or redistributed.
Vickie Ashwill | WCPO contributor
<p>Paul Ellis of Fort Thomas knows his hybrid electric-gas Toyota Prius will be hit with another fee if a pre-filed bill for the 2018 session of the Kentucky Legislature becomes law. But, he says, "people like me who own such a vehicle can afford the fee."</p>

Kentucky residents who drive hybrid or electric cars might soon have to pay an extra fee annually if the Kentucky Legislature approves a proposed bill in its 2018 session.

Kentuckians might also be able to drive to a casino within the state in the near future -- something that’s been rejected by legislators in the past.

It’s all about creating new revenue streams, say some state legislators, who are looking at fixing a tight budget and a failing pension plan.

About 100 bills had been pre-filed by both legislative houses at the end of the first week of December. They run the gamut from defining when life begins to legislative ethics rules for sexual harassment, early voting and creating special prayer day for students.

Pension and budget bills are yet to come.

Northern Kentucky Rep. Sal Santoro (R) of Florence filed the bill to charge an extra fee on hybrid and electric cars. Any revenue from this fee would go directly to state road maintenance and construction, he said. The gas tax is currently the main source of revenue for roads.

"Hybrids and electric vehicles are not paying their fair share," Santoro said, because they still use the road but are paying lesser or no gasoline tax.

If approved, the bill would make hybrid and electric car owners pay anywhere from $50 to $150 annually, depending on the vehicle. Although there were only 28,700 hybrid and 390 electric vehicles registered in Kentucky in 2016, Santoro said that number is expected to continue to rise.

Paul Ellis, a hybrid Prius owner from Fort Thomas, argued that such a fee would not raise enough money to do much to help the budget, but he said the fee itself didn't bother him.

"Let's face it, people like me who own such a vehicle can afford the fee, so it wouldn't be a totally bad thing," he said.

Other residents said an extra fee is punishment for folks who are already taking an environmental stand with their hybrids or electric cars.

"I already pay more for my plates," said Prius owner Liz Gantzer of Newport. Gantzer said she chose her fuel-efficient car because she drives a lot for her job and because it was the responsible thing to do for the environment -- she's putting fewer pollutants in the air.

"I'm being penalized for doing the right thing," Gantzer said.

Some area residents suggested raising the gas tax, but Santoro said it's still not fair, since electric vehicles are using the roads without paying for them.

In addition to that bill, here are a few others of note:

Another bill pre-filed by a Northern Kentucky representative is aimed at bringing in more money to the state through gambling.

Casinos and gambling have been the subject of controversial bills in recent legislative sessions, but Dennis Keene, a Republican from Wilder, said he believes "the atmosphere is more receptive right now."

Kentucky already allows parimutuel gambling -- betting in which all winning bets share the total pool -- at specific venues for horse racing. Keene's bill would expand what those venues can do as well as add up to four casinos across the state. He sees the betting eventually including other sports, including basketball, baseball and football.

The historical racing revenue has brought in about $3.5 billion since 2011, with $11 million going to the state, said Keene. "That shows you how much revenue potential is out there."

He concedes that the issue comes up every couple of years in the legislature, saying, "There's not been the political courage to pass it."

Like other abortion issues, it's been in the Legislature before, but Johnson said, "It has a good chance. We're in a different climate from Roe v. Wade."

Johnson said the younger generation is pushing the legislation, although Pew Research Center surveys indicate support for legal abortion is higher among Americans 18-29 than any other surveyed demographic.

"It's life at conception, and (abortion is) murder," Johnson said.

Sexual harassment issues have come up in state government before, but with national pressure building, this time around a state law could be the result.

Kimberly Moser, a Republican representative from Taylor Mill, is co-sponsor of a bill that defines harassment and sexual harassment clearly as ethical misconduct and allows the Legislative Ethics Commission to investigate complaints, whether oral or written. It would also create an ethics tip line for employees to report these abuses and other abuses, including fraud and theft.

A separate bill would prevent legislators from working as a lobbyist for a year after leaving office.

Mandatory drug treatment would be a penalty for someone convicted of possessing certain drugs or paraphernalia if a bill filed by Gerald Watkins, a Democrat from Paducah, becomes law. Offenders would also have to perform community service, and possession of some drugs that now result in a felony conviction would become a misdemeanor.

Another bill by James Tipton, a Republican representative from Taylorsville, would require school districts to include drug abuse prevention to be taught in physical and health education classes.

A new law could allow Kentucky residents to carry a concealed weapon without a license, but only in places where licensed holders can carry them now. It still would exclude schools and courthouses. Representative C. Wesley Morgan, a Richmond Republican, filed the legislation.

If approved, the state would raise the minimum wage to $8.20 per hour (from $7.25) on July 1 with continued raises through 2025, when it would ultimately reach $15 per hour. In addition, local governments could raise the wage above the state-required minimum. The bill was submitted by Reginald Thomas, a GOP representative from Fayette.