Isaiah Payton, Carlos Garcia thrive in their roles for the Moeller basketball team 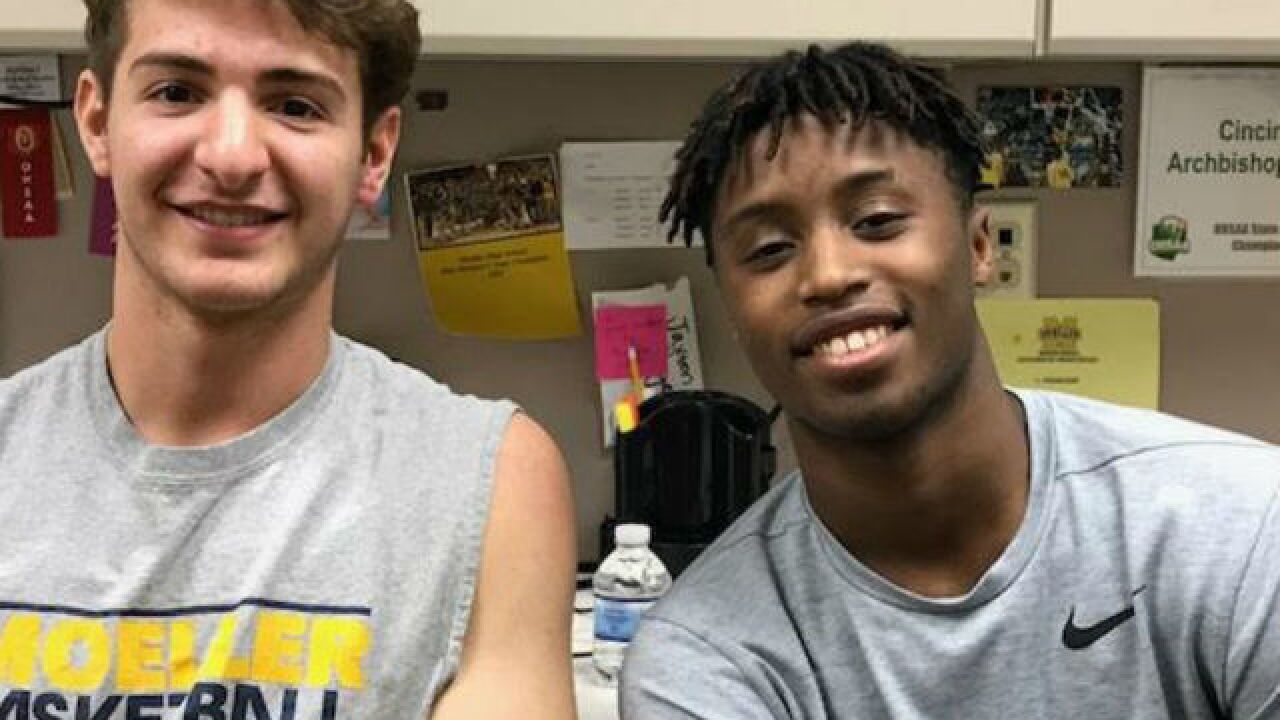 The Moeller point guard knew how much his friend and basketball teammate wanted to be in the regular rotation during the 2016-17 season.

There was anger and frustration at times from Garcia, who struggled offensively. His offensive struggles bled into his defense. His confidence was shaken.

Payton, now a senior point guard, knew what it felt like to want additional playing time. He experienced that earlier in his career. He empathized with his former Mason Middle School teammate last season.

When Garcia -- now a senior forward -- lost significant minutes during a slump as a sixth man in late December 2016 and early January 2017 for an undefeated team that eventually completed its season as a Division I state runner-up, he didn’t get outwardly discouraged.

Inside, he felt differently. He had a point to prove.

“I’m a competitor,” Garcia said. “I wanted to be out there as bad as anybody else.”

Instead of pouting or somehow feeling as if he was cheated, he went to work -- in a hurry.

Garcia took shots at 6 a.m., and had his dad, Carlos Garcia Sr., rebound for him. His dad told him not to be a victim. He just needed to put in more work and stay the course last winter.

Garcia was first in the gym after school at 2:30 p.m. last season before team practices. He put on the Moeller jersey Friday night knowing he would be on the bench. But during the week, he took his role on the scout team very seriously.

Everything he did was predicated on having a more significant role his senior season. This past offseason, Garcia locked in on the Moeller skill development and weight room sessions like none other, according to the coaches.

“There is no one on our team that I have more respect for than Carlos,” Moeller coach Carl Kremer said. “He went to work this offseason. No one made himself a player more than Carlos Garcia. He’s got a toughness and he represents our core values impeccably well, and I think he’s really the quiet leader of our team.”

Garcia has flourished for Moeller (25-3) which plays Lorain (22-5) in a Division I state semifinal at 5:15 p.m. Friday at Ohio State University’s Schottenstein Center.

This season, Garcia is tied for the second-most amount of minutes (686) on the team. He averages 7.3 points but his toughness, defense and awareness on the court are just as valuable.

“He’s been our rock from the first day of practice,” Kremer said. “You see him making plays with and without the ball, taking charges, bringing our team together.”

But, at Moeller it’s all about the team at the end of the day.

“You know with Jaxson (Hayes) and Jeremiah (Davenport) what you are going to get and (junior forward) Alec Pfriem comes over and is so good offensively and Sleepy (Payton) has been here forever,” Moeller Statistician Jai Schiavone said. “We needed that fifth guy with Miles being hurt. Carlos came in and right away took charges and is the most vocal on defense communicating. He gets us in and out of stuff. At the end of the year he was our best 3-point shooter at almost 40 percent.”

Payton couldn’t be happier for Garcia. A two-year starter and Indiana Wesleyan University signee, Payton has a 60-5 record as Moeller’s starting point guard.

He sat next to Moeller Assistant Coach Fred Hesse on the bench for much of his sophomore year until former Moeller starting point guard Nate Georgeton suffered a season-ending injury his senior season. Payton and Georgeton had a healthy competitiveness in practice. The two have remained close to this day.

Payton was thrown into the starting rotation as a sophomore but has thrived as a starter the past two seasons. He could do more offensively this season, but he understands his role.

“He is someone that every player loves playing with,” Kremer said. “He’s a tremendous young man.”

Payton is Moeller’s most experienced varsity player. He can score from the outside and drive to the hoop. His quickness is always an asset.

Hesse lauded Garcia in a similar manner. Hesse thinks Garcia has fulfilled his role better than anyone on the team. His character speaks volumes.

“It’s been a fun journey,” Garcia said. “Moeller has taught me a lot about going through adversity and having to realize that things are bigger than just you. You are just a piece of it. You have to be the best piece you can possibly be.”