In keeping with its motto, Felix Coffee business is growing 'slow and steady' 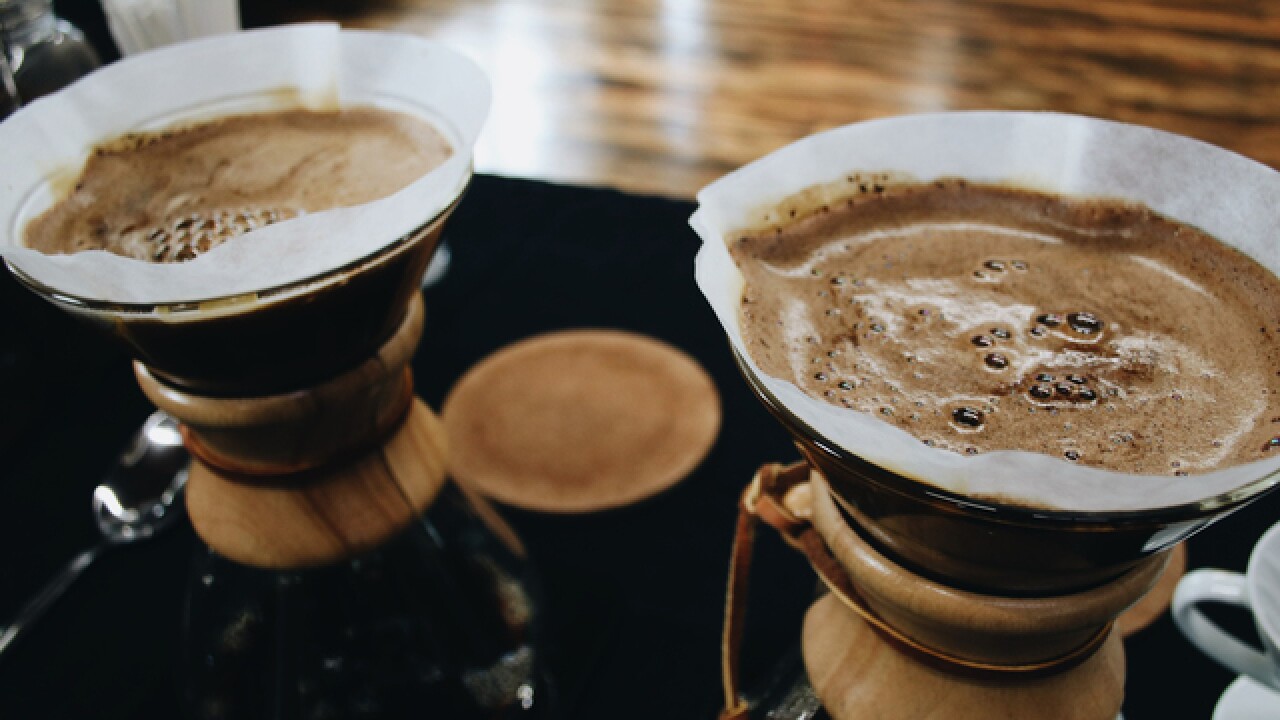 They originally intended to form a lifestyle brand, even though they weren't sure what that would look like, and then segue into a coffee shop.

"People told us coffee shops don't make a lot of money," Ufkes said. "We were like, screw that. This is what we want to do. We stuck with Felix because we loved the meaning and the name. With this journey comes a lot of happy mistakes and happy faults. It just fit us."

A few months later, in March, they visited Seattle -- one of the best places in the nation for third wave coffee, which is slowly made via a Chemex or Hario V60 pour-over device, usually from beans grown on a coffee farm that the shop's owner has a direct relationship with.

When Peele and Ufkes returned home, they knew what they had to do.

"The week after we got back, she and I felt like Felix Coffee needed to be a thing," Peele said.

Peele's coffee journey began even earlier in 2017, when he moved back to Mason after spending a couple of years in Los Angeles.

"It was the turning point in that I wanted to do something that satisfied me," he said.

He and Ufkes had met through the church a few years ago but didn't start dating until Peele moved home. While visiting the Pacific Northwest in March, Peele found inspiration at Portland's Prince Coffee .

"I just remember walking in there and looking at the design on the cups and the interiors and I thought, 'Why can't we do this?'"

In the spring, "we both realized that we loved going to people instead of them coming to us," Peele said. So in April, they started serving pour-overs at their Loveland-based church, Living Word Fellowship , which has become home base for the operation.

They decided upon a pop-up concept in which they would set up at various storefronts in Over-the-Rhine and corporate businesses and serve a couple different roasts, courtesy of Yield Coffee Roasters in Monroe. (Yield donates 100 percent of its profits back to coffee farmers.) The first pop-up outside of the church was on Mother's Day at Eden Floral Boutique in Over-the-Rhine.

"It was insane," Peele said. "It was a perfect start to what Felix is now. The best part is you're vulnerable when you're putting yourself out there and making something and giving it to a person. It's been cool to get positive feedback every single time. We feel like what we're doing is what people want to see."

They experimented with different methods of brewing, such as using a Chemex.

"The only way Logan would drink coffee was with cream and some sugar," Ufkes said. "He could never drink it black."

However, through drinking coffees made with Chemex and the ilk, they discovered how much they loved simple black coffee. Yield roasts their Cafe Diego Nicaragua and Chanchamayo Highland Peru coffees, and Peele helps with the roasting process.

During the summer they hosted a few events around town, including supplying coffee cocktails at the Video Archive . Felix ramped up more in the fall, with stints at boutique Idlewild Woman in Over-the-Rhine and Urban Artifact's Ohio Explored Holiday Maker Mart , where they were two of the youngest vendors.

"It taught us you can do whatever you want as long as you're willing to work for it," Ufkes said. "Work has been a big priority in my family, and Logan grew up the same way. We're thankful we have that background."

Serving craft coffee to people who otherwise do not know what it is has been an experience for them, she said.

"There are some people who walk by the stand, and because we are a pop-up and it is a to-go setting, we get different reactions," she said. "Some people don't get it, and then the more you explain it, the more they understand. You always get the people who are like, 'Why would I pay $4 for a cup of coffee?'

Neither Ufkes nor Peele has taken a business class, so it has been a learning curve to run a company. One thing that does come naturally to them is the design aspect. Their Instagram is strewn with impeccable photos, especially images containing plants -- Ufkes also works at Fern Studio . Designer Nick Stroia drew their "slow and steady" logo.

"This has been the one thing I've ever done in my life -- and I'm only 21 -- that I actually feel content with where I'm at," Peele said. "Even for me, this is random. I wasn't super into coffee about a year ago, and all of a sudden this whole scene opened up in front of my eyes. You can express yourself through a drink and through a shop. It's been cool for me to express myself in that way."

For the remaining Fridays and Saturdays in December, Felix will be stationed at Idlewild from 10 a.m.-2 p.m. They have a new mocha drink on the menu as well as a Saigon tea. They're thinking of throwing a one-year anniversary party at Covington's The Frock in January, and it possibly will include more coffee cocktails.

The ultimate goal is to open a storefront within the next couple of years and keep doing the pop-ups on the side.

"A shop would be incredible," Peele said. "We talk about it every day. I can't wait until we have a shop and we don't have to put a cart in the back of the car when it's freezing cold. With anything, you have to start somewhere."