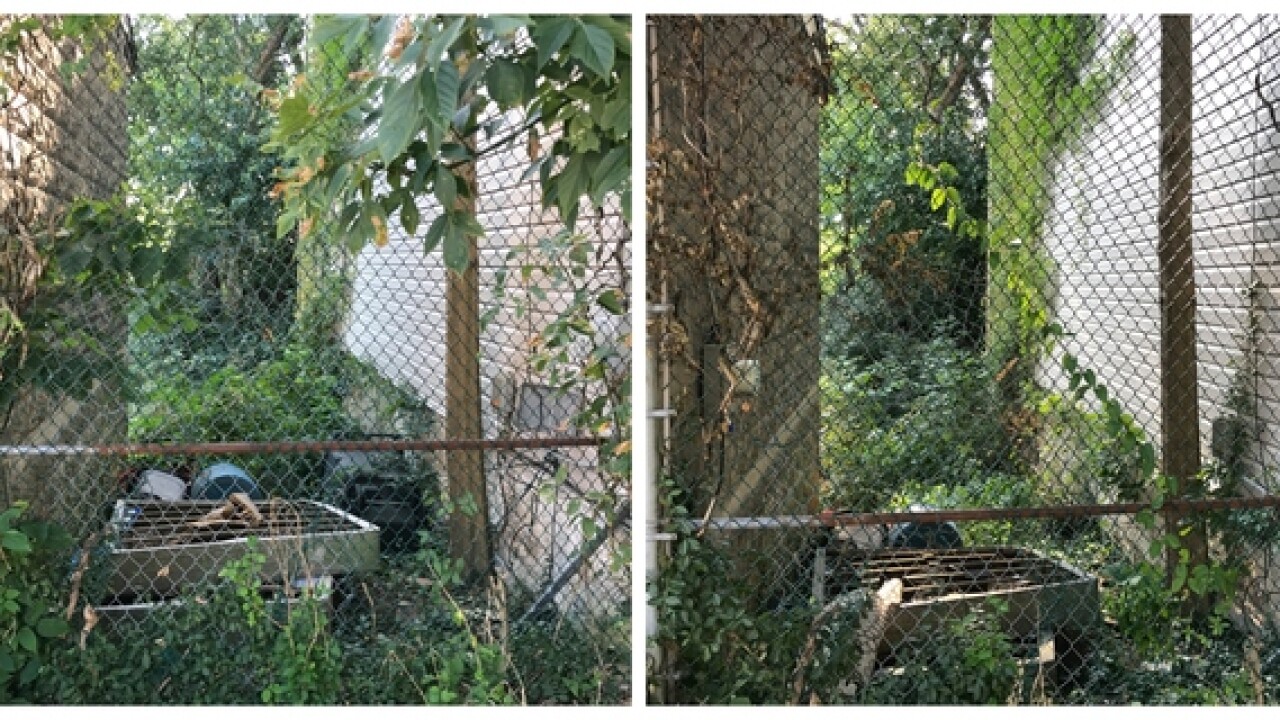 Copyright 2018 Scripps Media, Inc. All rights reserved. This material may not be published, broadcast, rewritten, or redistributed.
<p>The side yard of a house on Wells Street in East Price Hill when WCPO visited in 2017 and a year later in 2018. The house is owned by the Hamilton County Land Bank. </p> 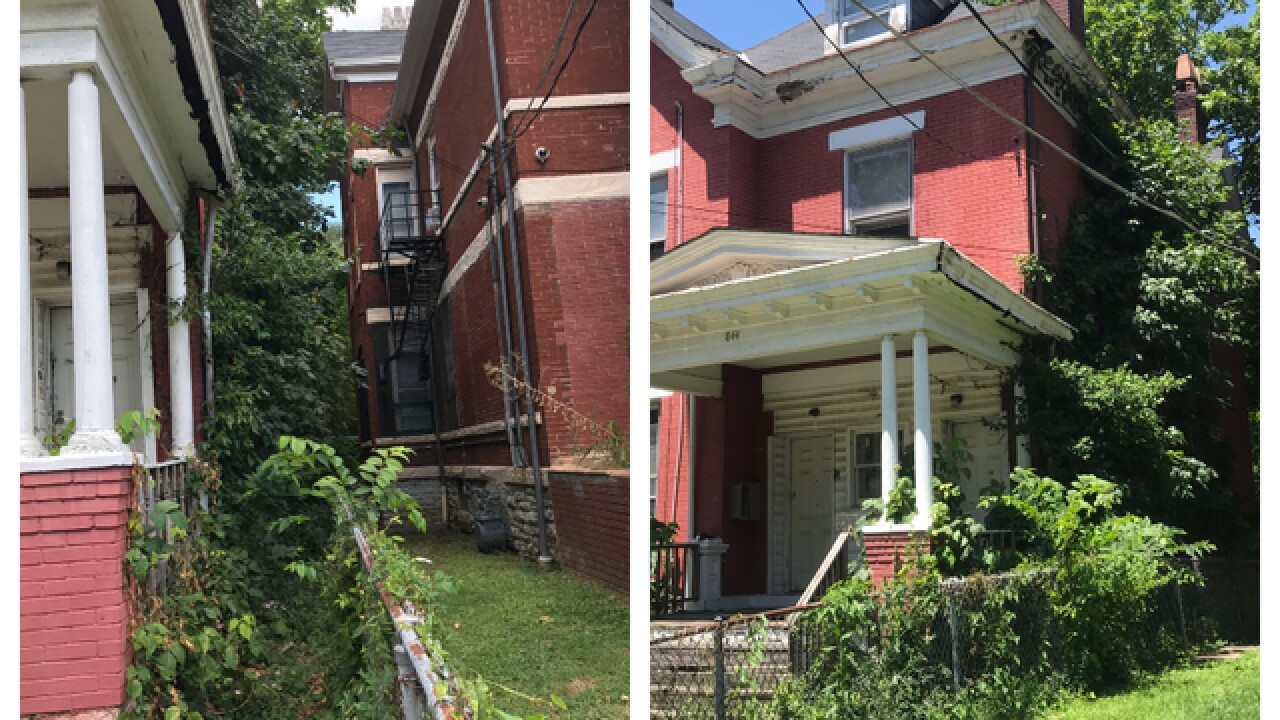 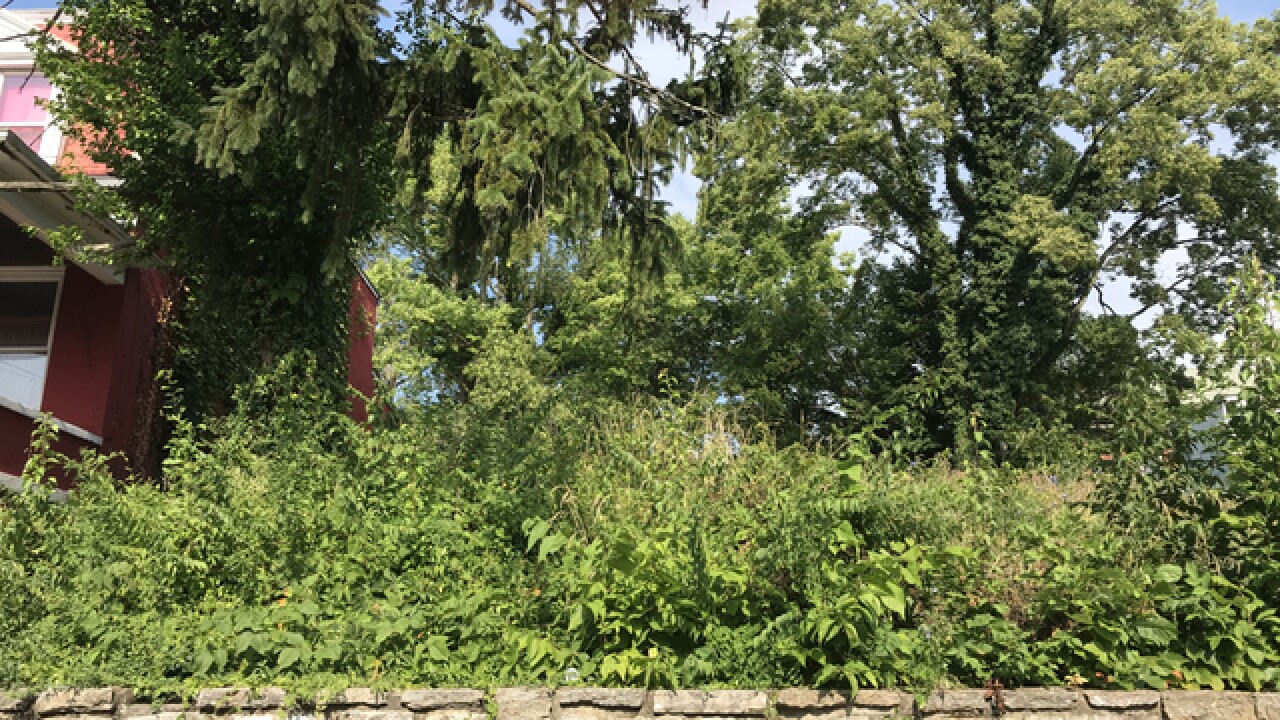 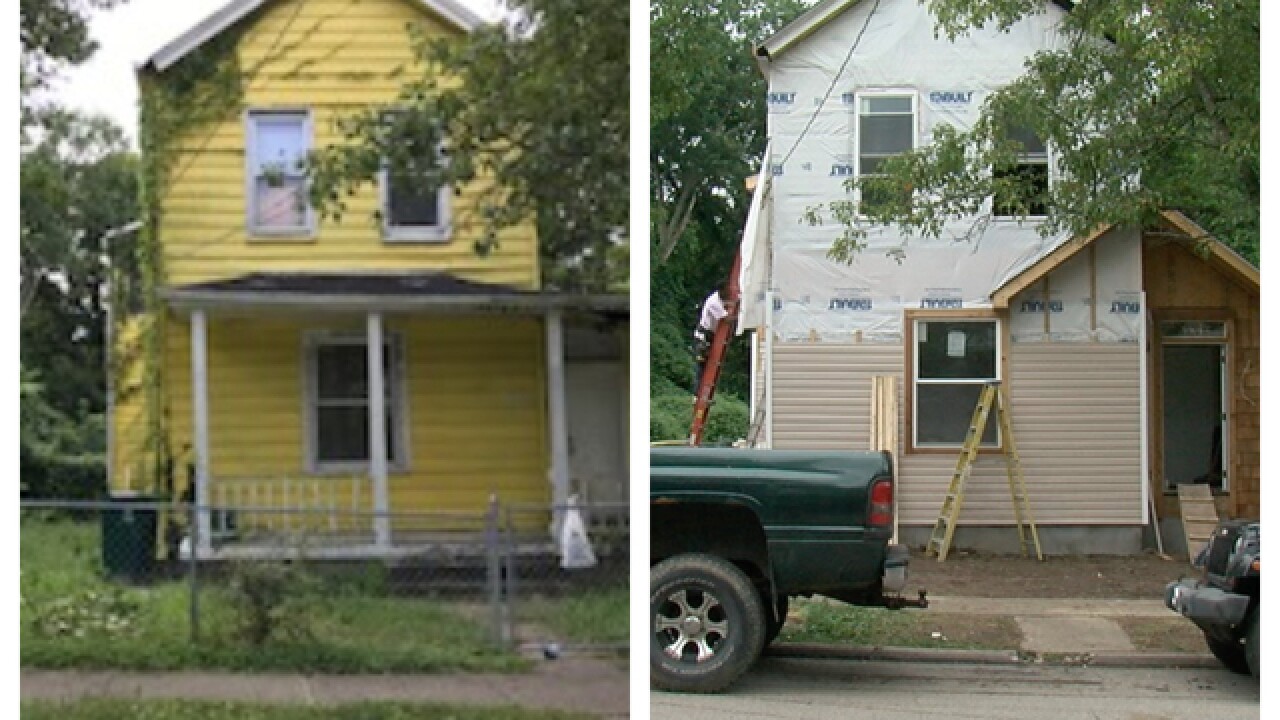 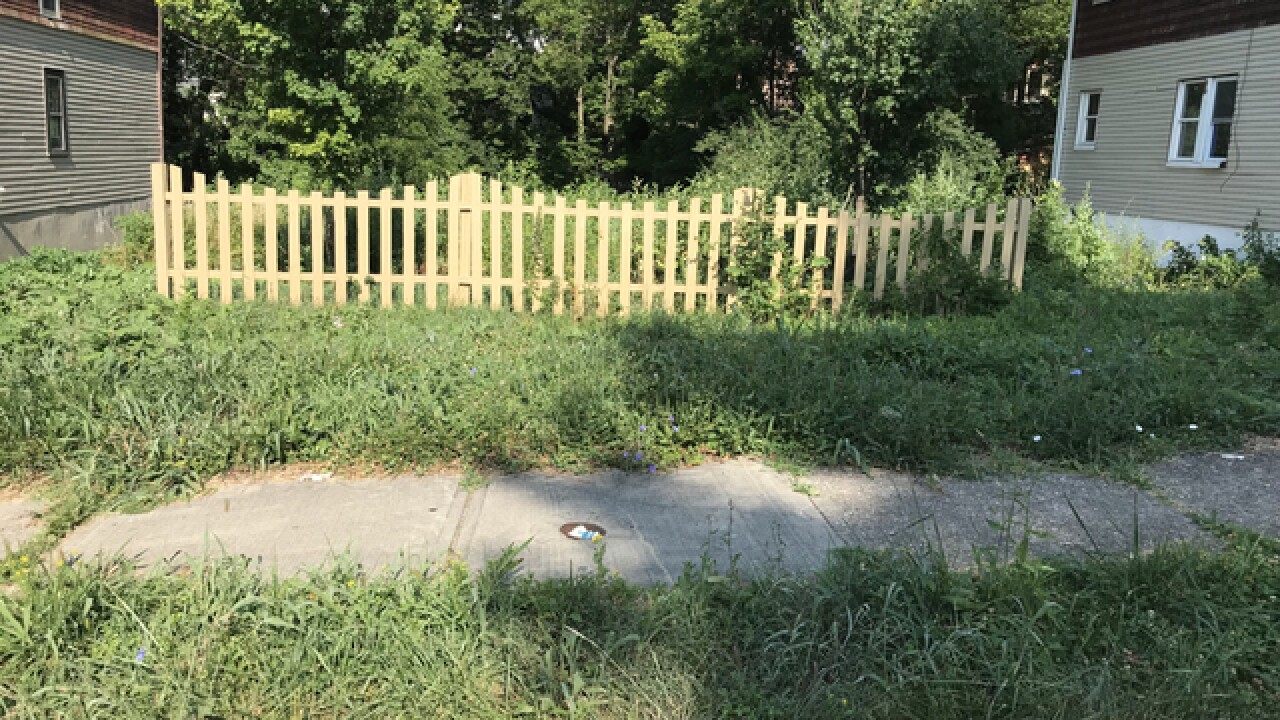 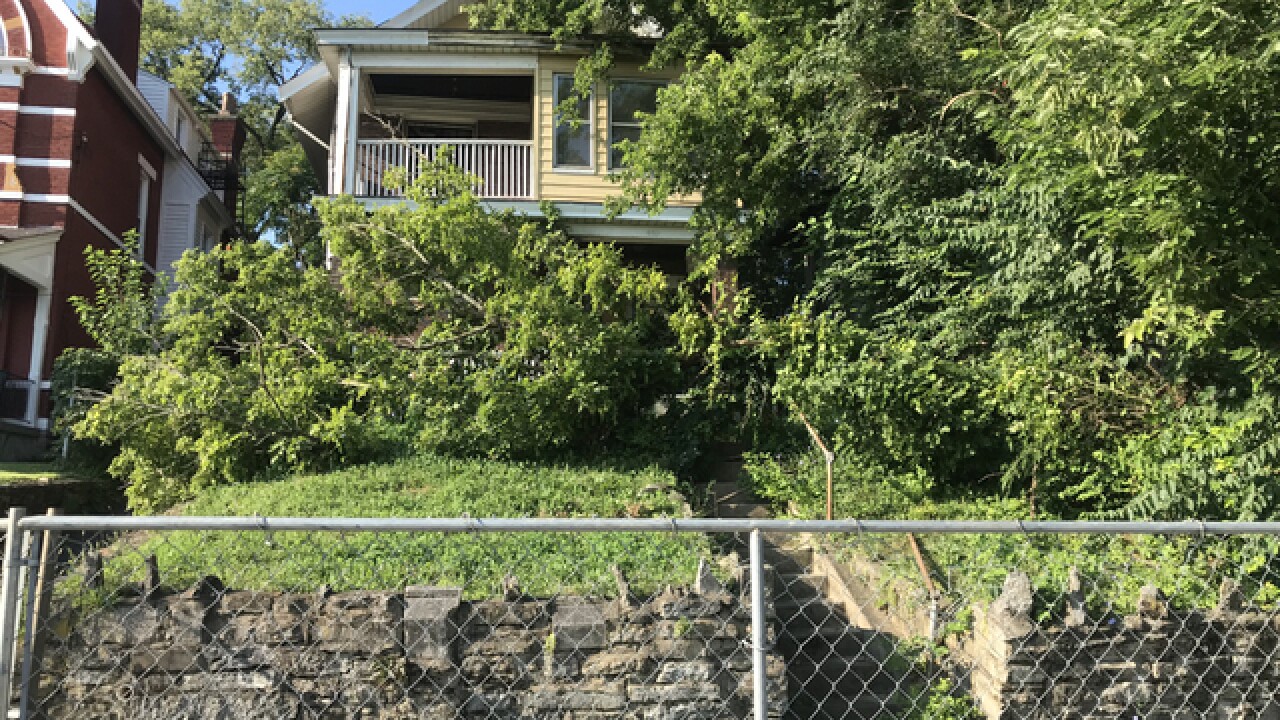 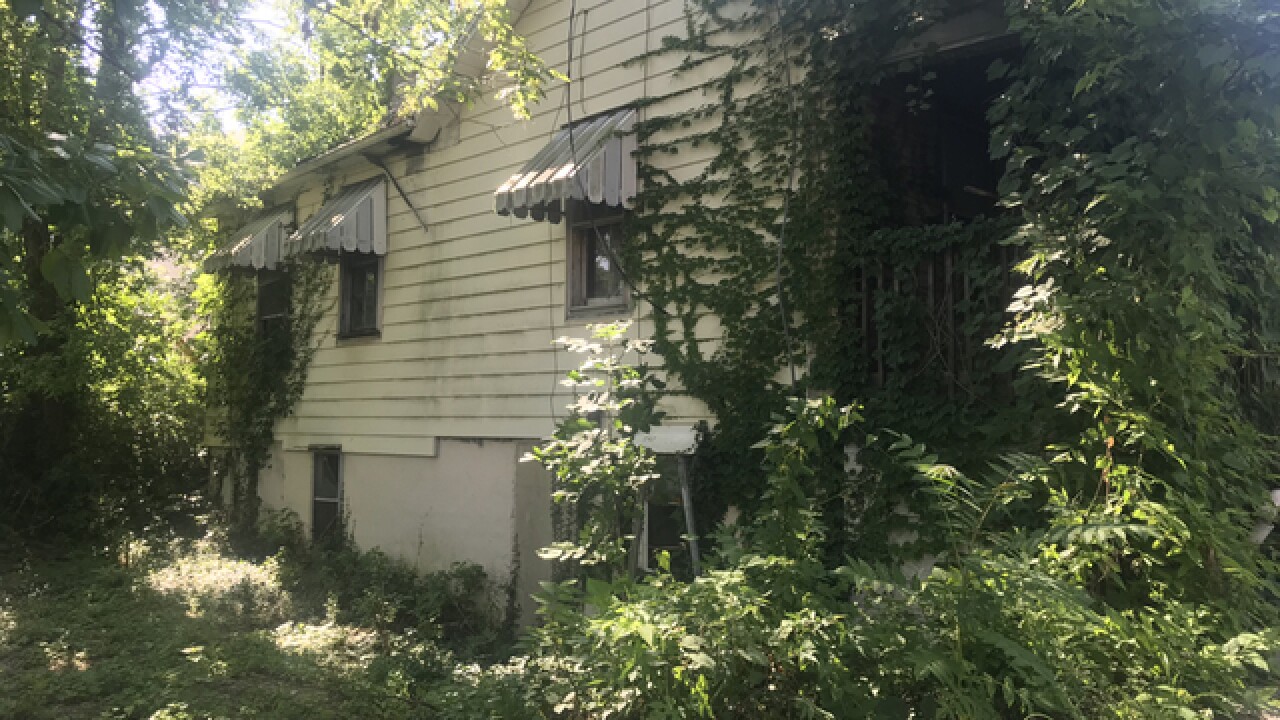 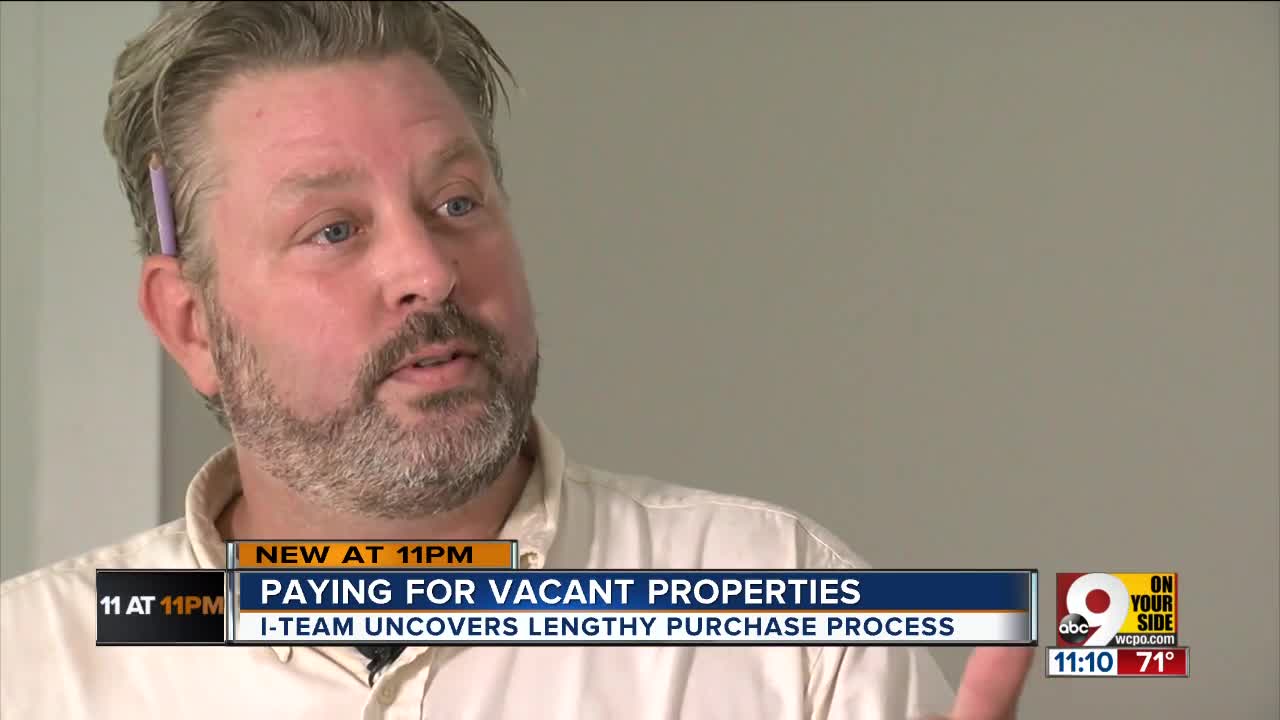 CINCINNATI - A nonprofit tasked with cleaning up abandoned properties and reducing blight has been fined 97 times by the city of Cincinnati over the past year for tall weeds and litter, at a total cost of $115,450.

These new fines come a year after a WCPO investigation found the Hamilton County Land Reutilization Corporation, a nonprofit commonly known the Land Bank, was not properly maintaining many of the old houses and vacant lots in its large inventory.

A year later, as WCPO revisited the story, it found the Land Bank is still allowing weeds to grow waist-high on many of its vacant lots and trash to accumulate in the yards of some houses it has acquired.

“When you take a quasi-government entity … who can’t be fined, can’t be sued, can’t be made to comply. They are supposed to be where the buck stops,” said Laura Hamilton, president of West Price Hill Community Council -- a neighborhood where the Land Bank has acquired more land recently.

“When they actually become part of the problem, its devastating and demoralizing to everyone in the community,” Hamilton said.

Last year the Land Bank came under fire when former Cincinnati City Councilman Kevin Flynn threatened to withhold $700,000 in city funding until it cleaned up the more than 700 properties it owned back then. “It thoroughly disgusts me that a government entity would permit property ... to become the poster child for the blight ... (it) was created to eliminate,” Flynn wrote in a July 2017 motion. “Instead of eliminating blight, the HCLRC properties are often the most blighted in the community.”

Hamilton County’s Land Bank, which is funded largely through delinquent tax collections, is the last resort keeper of vacant and blighted properties that have no other outcome. Once it acquires a house, it is tasked with keeping it safe, neat and boarded up until it is either demolished or renovated.

Since the county’s land bank is a government-created nonprofit, it is immune from paying fines.

But can it ignore city codes?

Flynn’s questions prompted WCPO to launch its own investigation last year into the condition of the Land Bank’s houses and vacant land. The result: 14 of the 52 properties visited were in bad shape.

In the aftermath, Land Bank leaders vowed to add more landscapers and better monitor the condition of its properties.

So this summer WCPO returned to many of the Land Bank properties it had visited last year, to see if leaders had kept their promises.

Some old houses that were being smothered by vines and weeds in 2017 are now nicely renovated. Others were demolished and now exist as neatly mowed vacant lots. But in some cases, the very same problem houses and lots that WCPO visited in 2017 were unchanged a year later.

When WCPO examined the condition of 100 Land Bank-owned properties in East Price Hill, West Price Hill and Lower Price Hill, it found 46 of them – or roughly half – had open code enforcement violations in July for tall weeds or litter, according to city records.

“We would like to see them only acquire what they can handle,” Hamilton said.

Jessica Powell, vice president of the Land Bank, declined an interview, but sent an email response to WCPO.

“We have implemented several changes to our maintenance practices since your news story last year,” Powell wrote in an Aug. 2 email.

Last year the Land Bank only used two landscaping contractors to maintain its inventory of property in a county that spans 413 square miles.

“We have increased our grass contractors from two to seven. We have increased the frequency of grass cutting by over 20 percent,” Powell wrote. “We require that our lawn contractors monitor Land Bank properties for other problems (e.g. dumping or break-ins) and to report any issues promptly.”

But Hamilton and other leaders in East and West Price Hill are unhappy with how the Land Bank maintains properties in their communities.

“I have noted that in a number of cases the code violations don’t get any better – sometimes they’re even worse,” Hamilton said. “And that really isn’t going to do us any good.”

Former city councilman Kevin Flynn regularly drives up Colerain Avenue on his way home to Mt. Airy. Last summer knee-high weeds and purple-flowered vines spilled onto the sidewalk and led to the collapse of a stone retaining wall there.

He was determined to find out who was responsible. When he discovered that the Land Bank owned the neglected land, he threatened to withhold their city funding until it was cleaned up.

What’s the condition of those sidewalks this summer?

“They actually do look better,” Flynn said. “Had an early problem of overgrown (weeds) but they corrected it before I could complain.”

Keeping track of more than 800 properties, which often exist in neighborhoods where illegal dumping is a common practice, is a constant challenge.

“Our properties are, by their very nature, susceptible to dumping, break-ins and other vandalism,” Powell said.

Last summer WCPO visited a two-story house on Wells Avenue in East Price Hill and discovered the back and side yards filled with trash bags, an old mattress, carpet remnants and tires.

Soon after we alerted Powell to the dumping, the property was cleaned up.

"Someone has cleaned up this property I am impressed,” an inspector assigned to the case wrote in a report on Oct. 24, 2017.

A year later, WCPO returned to the Wells Avenue house. While the backyard had been cleaned up, the dumping in the side yard was unchanged from a year ago.

“Our records show that we removed a large amount of debris last year and, thus, whatever you may have recently seen is a result of new dumping,” Powell said. “Whatever the case, upon learning of the problem, we have dispatched a contractor who is in the process of cleaning up the property again.”

This summer WCPO visited nearly 50 properties in Avondale, Evanston, Madisonville, Clifton Heights, O’Bryonville, Walnut Hills and East and West Price Hill. Most of the vacant lots were neatly mowed and most homes were either newly renovated or securely boarded up. But others were in poor shape.

Several vacant lots in East Price Hill looked as if they had not been mowed in months, with 4-foot tall weeds. Many old homes were covered in vines.

Calvin Singleton trimmed wildly overgrown shrubs that were spilling over from a Land Bank-owned house in O’Bryonville, invading the parking lot of Lee Chapel AME Church.

“I thought that there might be a collision in some point in time,” Singleton said. “So to make it easier for people to see if someone was coming out of the parking lot or coming down the street, I was cutting back these bushes.”

Many neighbors get so frustrated with the Land Bank’s lack of maintenance that they resort to caring for the neglected land themselves.

“It’s very unfortunate because when these things have to be done it either falls to the neighbors to do it for them -- free of charge, on our own time, with our own equipment, and our own gas, and our own sweat, or it falls to the taxpayer to send public services … out to the property and get it under control,” Hamilton said.

When Joe Bley bought a century-old house on Chandler Street in Madisonville from the Land Bank in February, his contractors laughed when they walked inside for the first time.

“The foyer was literally falling down. The carpet was holding you up. The ceiling was coming in,” Bley said. “Rain was coming through the foyer and through the back.”

When WCPO visited this yellow two-story home, built in 1904, last summer, vines were so thick along both sides of the house that large swaths of the structure were no longer visible.

“They are leaving it to die,” next-door neighbor Tonya Brogan said at the time.

After six months of extensive renovation, Bley will put the house on the market in early September and expects a quick sale.

“We were able to get it for a song and because of that, we were able to open our budget to higher end finishes … everything in the house is new,” Bley said.

Bley has been rehabbing houses for 30 years, but this was his first time buying from the Land Bank. He isn’t sure he would do it again. Although he got a great price on the house, it took a year to purchase it due to delays at the Land Bank: “They sat on our offer,” he said.

“It took us a year, I mean just to acquire it. Whereas if I were to buy something on the open market usually I could … come to terms in two or three days and close within 30,” Bley said.

In the meantime, the house deteriorated almost to the point of being unsalvageable.

“They weren’t doing anything.They were just making sure it didn’t tip over. And it was getting to the point where it could have,” Bley said.

The problem of blight in Hamilton County is not easily solved.

In the city of Cincinnati alone, officials have identified 2,200 properties as vacant, uninhabitable and blighted.

“Before the Land Bank takes the title to a property, it will have already undergone years of neglect, absentee ownership, code enforcement and other degradation,” Powell said.

Ohio lawmakers created a new form of land banks in 2008 to be a last resort keeper of vacant and blighted properties that have no other outcome in sight. Land banks currently operate in 53 of Ohio’s 88 counties.

Hamilton County’s Land Bank has increased its holdings from 190 properties in 2014 to 850 as of mid August. It added nearly 150 properties to its bank in 2018, and it would like to keep growing.

If the Land Bank doesn’t take on more properties, nobody will, Powell said.

As one of the largest property owners in the city, the overwhelming majority of their properties are in code compliance, said city spokesman Casey Weldon in an email to WCPO.

“Once the Land Bank acquires a previously abandoned property or lot, there is an immediate and drastic improvement in upkeep,” Weldon “Unlike many owners of vacant lots, the Land Bank is highly responsive to requests from the City to address conditions at their properties.”

But Sheila Rosenthal, recording secretary of the East Price Hill Improvement Association, believes the Land Bank is robbing private developers of the chance to rehab old houses, in favor of demolishing them.

“We see a lot of properties being leveled and nothing built,” Rosenthal said. “We’re left with brown fields which don’t add to our community.”

Rosenthal would like Land Bank officials to talk to community council leaders before they demolish properties.

“We had some really nice Victorian properties here that could have been developed,” Rosenthal said. “It wasn’t a conversation that the community was really involved in.”

“To give away money to have land lay fallow for months or even years, and there’s really no tax coming in on any of it, there’s no jobs being created and its doing absolutely nothing to benefit the community,” Hamilton said. “Why are we paying people to hoard property?”