How do you fix a broken streetcar? 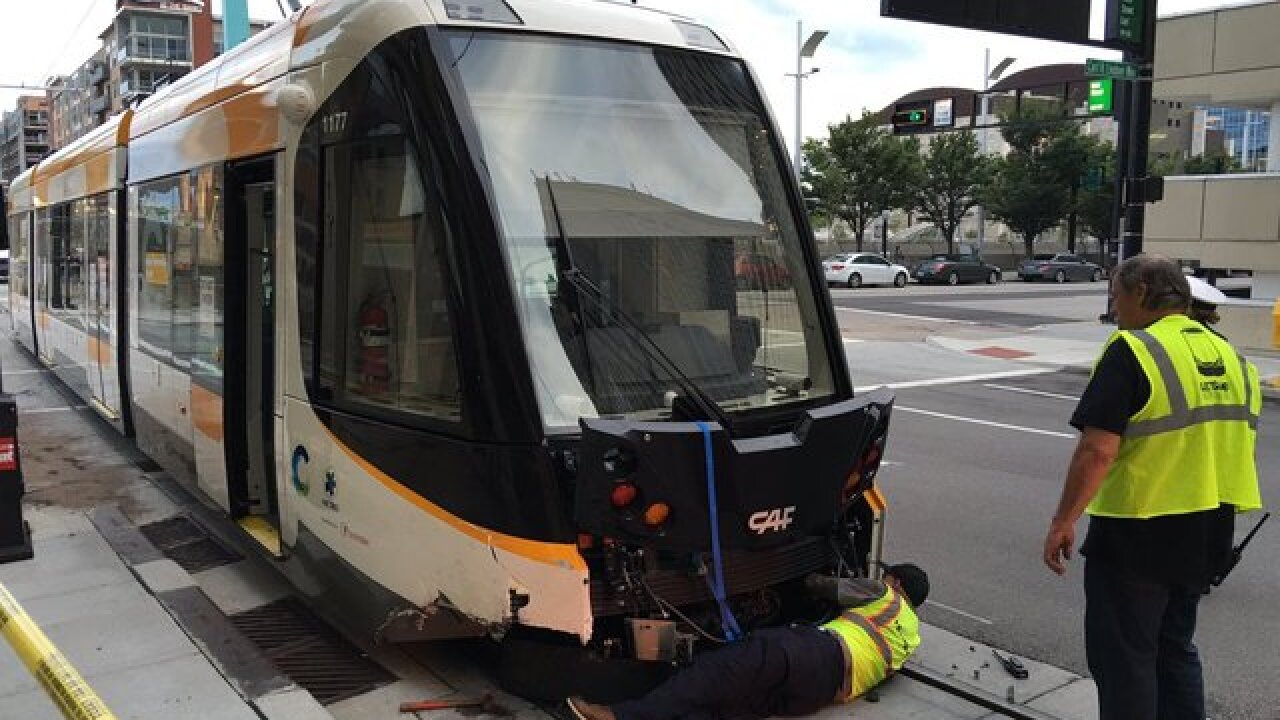 Ashley Zilka | WCPO
<p>Mechanics work on Monday, Aug. 15, 2016, to repair a streetcar vehicle damaged during a collision with an automobile. (Ashley Zilka/WCPO)</p>

CINCINNATI -- It was the kind of crash that could have easily happened between two automobiles. A driver makes an illegal right turn on a red light, striking another car passing through the intersection on a green light.

Only this time, that second vehicle was one of Cincinnati's five new streetcars .

That was Monday evening, when police said a motorist traveling westbound on Third Street near The Banks made an illegal right turn onto Main Street, just as a streetcar vehicle -- in the midst of a test run -- was headed northbound on Main, moving through the intersection on a green light.

While a spokeswoman for the Southwest Ohio Regional Transit Authority, Sallie Hilvers, couldn't say much about the crash because an investigation is ongoing, she could say that this has been the first major traffic incident involving one of Cincinnati's streetcars since testing the vehicles began earlier this year.

As such, Monday's collision marks the first time streetcar officials have had to deal with what comes after every crash: repair. Being a track-bound vehicle, the process isn't as simple as towing it to a nearby auto garage (although the streetcars can be towed when necessary).

Fortunately for SORTA, much of the aftermath of a streetcar-involved crash is handled by the firm hired to manage maintenance and operations for the streetcar, Illinois-based firm Transdev, Hilvers said.

According to Hilvers, because the collision was with another driver, who police deemed to be at fault, that will trigger an insurance claim by Transdev against the motorist while Transdev's mechanics working here locally assess the damage.

"They've been going over it since it happened," Hilvers said.

QUIZ: How prepared are you for the streetcar?
MORE: 1 month from streetcar service: 9 things to know

Since Monday, Hilvers said mechanics determined that the damage to the streetcar was not enough to warrant sending the vehicle back to the plant in Elmira, New York, where the vehicles were first constructed. It will require some new fiberglass on the vehicle's exterior paneling where struck. Some mechanical repairs on components inside the panel are required, as well.

It's work that Hilvers said can all be done "in house" by Transdev employees. "Our mechanics have the expertise to fix this locally," she said. Even the fiberglass that will ultimately replace the damaged panel could be manufactured here in town, Hilvers said.

But Hilvers said that might not always be the case, and that there's always the possibility that a vehicle could require a trip back to Elmira if the damage is severe enough. Each crash will be considered on a case by case basis.

But could a crash impact the streetcar's service schedule?

This is where a certain level of intended redundancy comes into play, Hilvers said.

"Even during peak ride times, we will only need four of the five cars running, and at other, slower times, we may run two or three at a time," Hilvers said.

It's a common precaution to have an extra vehicle or two on hand: When a car crashed into one of Kansas City's then-newly opened streetcar vehicles, Kansas City spokesman Chris Hernandez said, "You know, we knew it was going to happen at some point, but it finally did. Unfortunate, but that's why we have a spare streetcar."

And it's not as if streetcar officials weren't prepared. Earlier this summer, Cincinnati's streetcar team partnered with the city's police and fire departments to simulate an emergency situation involving the streetcar -- specifically, a car crashing into the vehicle while on the tracks. The emergency simulation was the result of more than a year's worth of coordination and planning between emergency and streetcar crews.

"This isn't the first time this has been done in the country, so we have a lot of assistance and a lot of lessons learned from other streetcar systems," SORTA's rail director, Paul Grether told WCPO in June, while the simulation was underway.

Today, Hilvers said streetcar mechanics are working to get Cincinnati Streetcar No. 1177 back in working order.

"We're working very hard to get it up and running for the grand opening," Hilvers said. That's scheduled for the weekend of Friday, Sept. 9.