Philadelphia company hiring up to 60 drivers 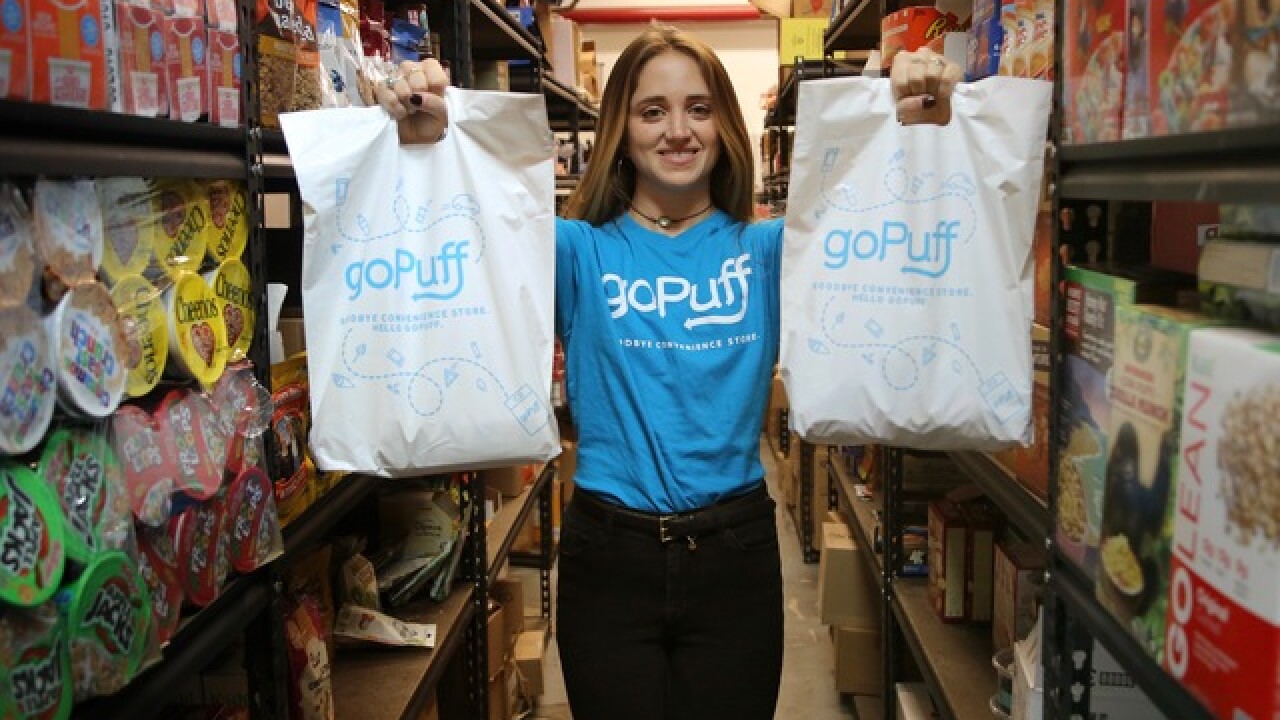 Copyright 2018 Scripps Media, Inc. All rights reserved. This material may not be published, broadcast, rewritten, or redistributed.
<p>Photo contributed by goPuff</p>

CINCINNATI - A Philadelphia company known for bringing late night beer and munchies to college students plans to launch its $1.95 delivery service in Cincinnati by the end of this month.

This will be the fourth Ohio market for goPuff, which was founded by Drexel University students in 2013 and now delivers in 47 cities, including Columbus, Athens and Dayton. It will launch in Cincinnati from a Central Parkway warehouse stocked with 2,000 items, including its perennial favorites, Flaming Hot Cheetos, Mexican Coke and Nerds Rope candy.

Alcohol orders will not be available at launch, but the company is trying to obtain licenses to deliver beer and wine at a later date.

“We’re really responding to a lot of customer demand,” said Liz Romaine, director of communications for goPuff. “We had a lot of customers that were using the app in cities where they were traveling. Or they were going home for college break, they were coming home to Cincinnati and the service wasn’t available.”

GoPuff is entering a crowded market in Cincinnati, with the region’s five major grocery rivals already offering same-day delivery on food and staples orders. GoPuff's $1.95 delivery fee is well below the stated rates of Walmart, Kroger, Meijer, Target and Amazon. But consumers can often avoid delivery fees by joining memberships, taking advantage of promotional officers and placing orders larger than $35.

RELATED: Which grocer is best at bringing dinner to your door?

Romaine said GoPuff pricing is comparable to convenience stores. Its Columbus web site shows a 12-pack of Bud Light for $13.79, two-liter Coke for $3.19 and a 12-ounce package of Kellogg’s Corn Flakes for $5.99. Those are all more than 30 percent above grocery-store pricing.

Romaine said convenience is a differentiator for goPuff, as most of its orders arrive between 30 and 60 minutes after ordering. If it’s able to launch beer and wine deliveries in Cincinnati, it would join Kroger and Amazon in that segment of the home-delivery market.

“We tend to focus on ice cream, snacks, drinks,” Romaine said. “What we like to say is we deliver the moments that matter the most. When you’re studying for a final. It’s 1 a.m. and you really want Cheetos, that’s what we’re going for.”

Romaine said the company is hiring 12 warehouse employees and up to 60 drivers to operate its Cincinnati service. Drivers are independent contractors who use their own vehicles on the job. The company’s web site tells applicants they can expect “up to $15.00+” per hour.