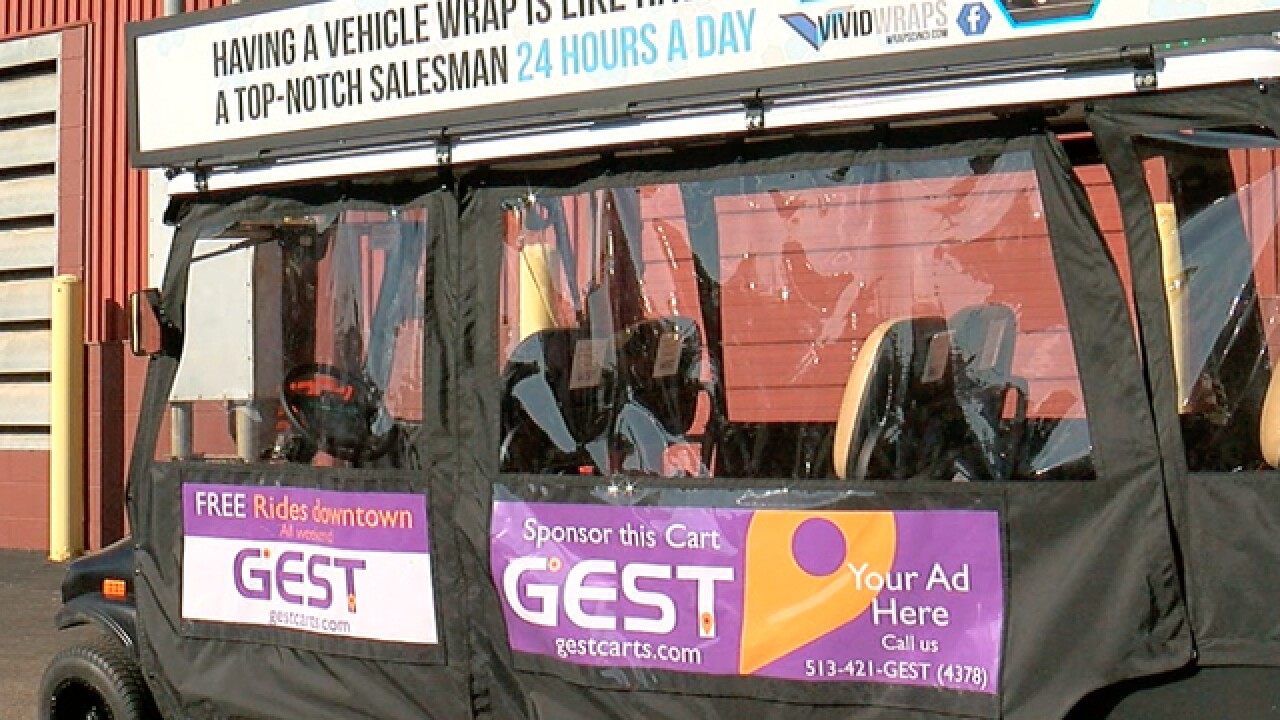 CINCINNATI -- Options for getting around Downtown and Over-the-Rhine continue to expand with the launch of an unconventional new transit service this month.

In order for a motor vehicle to be street-legal, many things have to be in place: a U.S. Department of Transportation-approved windshield, windshield wipers, headlights, taillights, brake lights, turn signals and a horn.

"None of that's on a standard golf cart," said GEST co-owner Patrick Dye told WCPO. "This is a souped-up, special, unique version."

In addition to all the features just listed, GEST -- which stands for Green Easy Safe Transportation -- carts also run on eight batteries. Golf carts typically use four to six.

Passengers are shielded from the sides by marine-grade, clear plastic tarps. Each cart is equipped with a large, orange, triangular low-speed vehicle sign on the back.

But is that enough to make these a safe way to get around Downtown and Over-the-Rhine?

Dye said safety is his No. 1 priority.

"This is not a car. It's a golf cart," he said. "I will not take these out if it's snowing or if it's extremely hard rain or thunderstorms. I don't want to put anyone at risk -- not only my drivers but just the customers in general."

He also described the application and training process as "rigorous," including background checks, driving record checks and a driver's test.

"Once you pass the background check and the driving record portion, you will have to go through a driving test. We're hoping to be working with CPD on that very soon," he said.

"The use of these carts as shuttles, tour vehicles and couriers has been under review for a little while," he said. "The operation of these cart vehicles on city streets is under review by our Law Department. Once we're given a directive, we'll proceed accordingly, and then each applicant will go through our insurance company, and they'll say yea or nay if they're able to drive."

As for other cars on the road, Dye said he's training his drivers to be just as aware and to be cautious since it's a low-speed vehicle.

"We try to stay in the right lane so faster-moving vehicles can go by," he said. Because of the caution sign on the golf cart's rear side, "cars around you do know that you're not going to be going 35 miles an hour."

GEST wouldn't be the first company to implement golf cart-style shuttles in a city's center. Nashville, San Diego, parts of Florida and Texas, and the Hamptons on Long Island, New York, all have golf cart transit in operation.

Another impact GEST's no-fare structure could have Downtown and in Over-the-Rhine: the streetcar. Both transit services cover basically the same areas -- the Banks, Downtown and OTR.

"SORTA supports any and all additional transportation options that help people connect to where they want to go, rather that be by bus, streetcar, bike or otherwise," said SORTA spokeswoman Brandy Jones. "It's ultimately up to the customer to determine the best mode of transportation that fits their needs."

Jones pointed specifically to the differences in capacity between the two modes of transportation: The streetcar holds roughly 200 passengers, while GEST carts are meant for five or fewer.

"The streetcar can do things we cannot do," Dye said. "We don't want to see the streetcar as competition. We want to say, 'You guys can go some places, we can go other places.' We just want to add something to the city."

Dye and his wife, Lauren -- who co-owns the company -- live Downtown and ride the streetcar frequently, he said.

For now, Dye said GEST is in a sort of beta phase. He wasn't sure what to expect when he launched the company's soft opening over New Year's Eve weekend.

"It was way more than expected because of how cold it was," he said. "But people were like, 'We don't have to walk anywhere. We can just hop in this.'"

Dye said GEST provided about 75 rides on New Year's Eve. The company's current hours of operation are on weekends -- weather permitting -- between 9 p.m. and 2 a.m.

Dye said what confuses people most is that there's no fare.

"The hardest concept for everybody to realize is that it's free. People are always like, 'What are you talking about? What do you mean it's free?'" he said.

"Everybody knows nothing comes for free, but this actually is."

The transit service is financed completely through advertising sales, with ads affixed to the sides of the vehicles.

"We discussed the whole Clifton operation but that won't be until we've figured out some things," Dye said. "We'd have to put a fleet of cars up there because going up that hill -- up Vine -- is a lot. It would drain the battery life."

Meanwhile, Dye hopes to have between 10 and 15 vehicles up and running by Reds Opening Day, and to begin rolling out expanded hours -- including possibly lunch-hour service, throughout spring and summer.