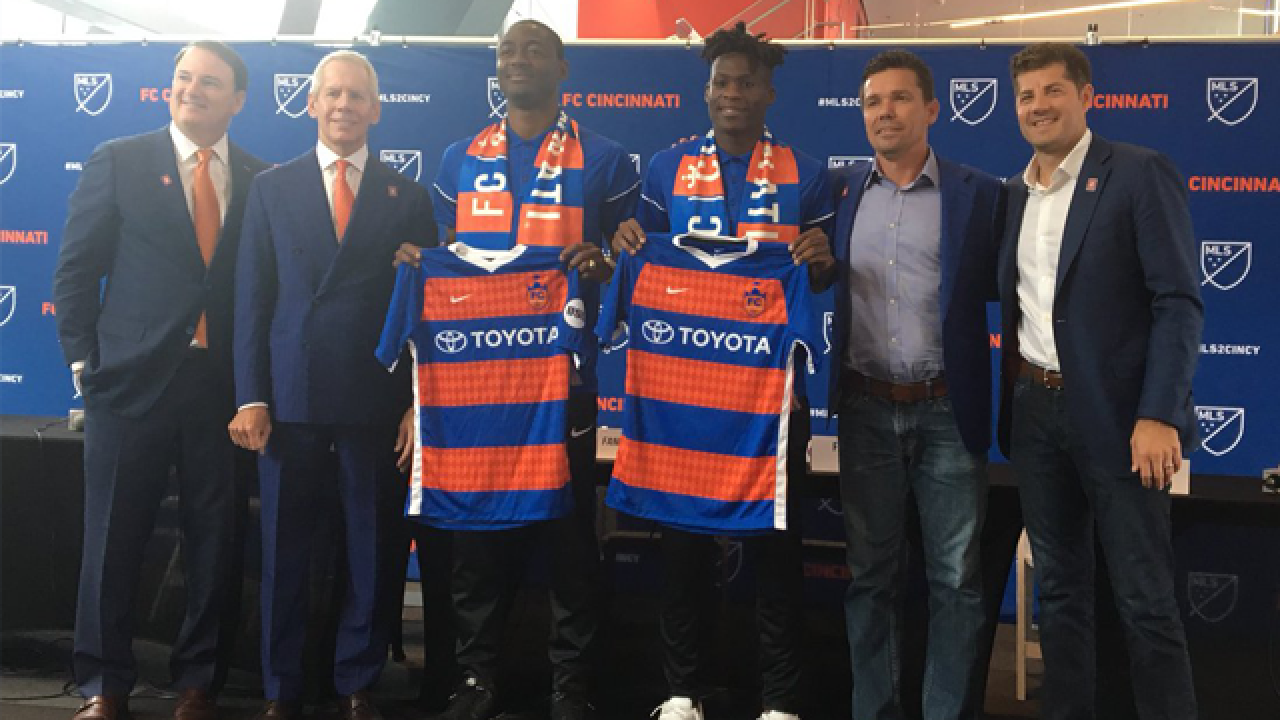 CINCINNATI -- FC Cincinnati has a long way to go in building its first Major League Soccer roster for next year, but technical director Luke Sassano feels the club still can afford to be picky about the types of players it signs.

Sassano, a former New York Cosmos executive who was hired in March, has been scouring the globe for top-level talent to bring in as FCC prepares to make the jump from the United Soccer League next year.

Just over two months since MLS awarded Cincinnati the league’s 24th franchise, FCC already has made a splash with the acquisition of three top-division players. And, although Sassano doesn’t expect any more transactions for a while, the club’s future moves likely will be in line with the first signings.

“We've had many good players come across our desk that were very good players but he doesn't fit exactly what we're looking for,” Sassano told WCPO.com. “And although we are going to be a new expansion franchise, there are going to be opportunities we feel we can be pretty selective in terms of what players we are bringing in.”

RELATED: FC Cincinnati brings in two top-division players in hopes of leaving the USL with a title

All three are on United Soccer League loan agreements to finish this season with FCC, which remains in first place in the Eastern Conference by six points entering Saturday’s match against fellow MLS expansion side Nashville SC.

Sassano said the new players all represent what the club has been emphasizing since Day 1: Finding talented but high-character players. Moving up to MLS won’t change that.

“We have a strategy, and if the player falls into that where people say, 'Wow, they just signed Fanendo Adi from MLS, from Portland Timbers, a guy that has been a prolific goal-scorer, has been MLS Cup winner,’ maybe the outside looks at it as a splash,” Sassano said. “But internally, we look at it as we're signing a very talented player that's going to be a representative ambassador for the club, not only on the field but also off the field in the community.”

FC Cincinnati will continue searching for these types of players even after the transfer window closes Aug. 8. The club plans to utilize free agency, the draft process and transfers as mechanisms to bring in new players ahead of next season, and FCC is honing in on certain markets to find talent.

Sassano went to Colombia to scout players last week at the Central American and Caribbean Games, and South America is definitely one area FCC is looking.

“We've definitely zoned into certain markets that we feel fit the profiles of the players we are looking for, whether it's undervalued guys if you're going to Costa Rica, Paraguay, Uruguay, obviously more high-profile type of players you can find in Argentina that are maybe more expensive, and then you start to go to Colombia,” Sassano said. “We also venture into Europe. We have specific markets in Europe that we're looking at.”

Cincinnati has looked at trends of what players from certain markets have done well in MLS, but Sassano said the club also wants to pave a new path in terms of finding lesser-known talent and bringing them here to elevate themselves.

Head coach Alan Koch seems to have a knack for getting the most out of players who bring strong resumes but maybe haven’t been as productive in recent years for one reason or another, and MLS has become more attractive to international players than in the past.

And Sassano believes Cincinnati has a lot to offer.

“When you show we've got 35,000 fans out to watch us, people's jaws drop,” Sassano said. “There are big leagues in the world where clubs in those leagues cannot have that same support. To come to a city like Cincinnati that geographically is located perfectly, it's less travel, we're in a good place in that recruiting platform.”

Adi credited Sassano, Koch, president/general manager Jeff Berding and owner Carl Lindner III for making him feel wanted enough to come to Cincinnati. He joked he got 20 calls in one day from Sassano to try to get the deal done.

Koch said he’s glad to have Sassano on the staff, leading the way on scouting and recruiting players that fit what he and Berding also are looking for.

“He's a team player,” Koch said. “He's working with everyone. He's come up with some good ideas, so he's a pleasure to work with. We're excited to have him.”

As head coach, Koch also plays a big role in building next year’s team as he will have a say in deciding which current players ultimately will stay with the squad.

Both he and Sassano said the club hasn’t decided on a set number to keep but they do have an idea.

“You have to give credit to our locker room, to be in first place, to be a USL team that is going to MLS next year but also has aspirations to win a USL championship, it's not easy,” Sassano said. “Even though we feel we may have the most competitive and talented team in the league, it's not easy to be a player in that environment when you know on the horizon there is going to be a change in direction a little bit. It's a big credit to the group we have. We are looking internally first to see what solutions we have with our roster moving forward.”

FC Cincinnati’s season runs through October and into November depending on a playoff run, and it’s likely an announcement will be made shortly thereafter regarding player signings from the current group.

Then there is a four-hour trade window the day after the MLS Cup Final the second week of December, and the expansion draft will follow a few days later. FCC should get five picks to take one player from any of the MLS teams, aside from the 11 on their protected lists. The SuperDraft then takes place in early January.

“We have a very short runway until preseason starts next year,” Sassano said. “Alan's focus right now is on the team that's on the field right now, and mine is as well, but it's also my responsibility and our technical staff's responsibility to prepare for next year, so we are coming out of the gates in the same way we are trying to build something right now.”