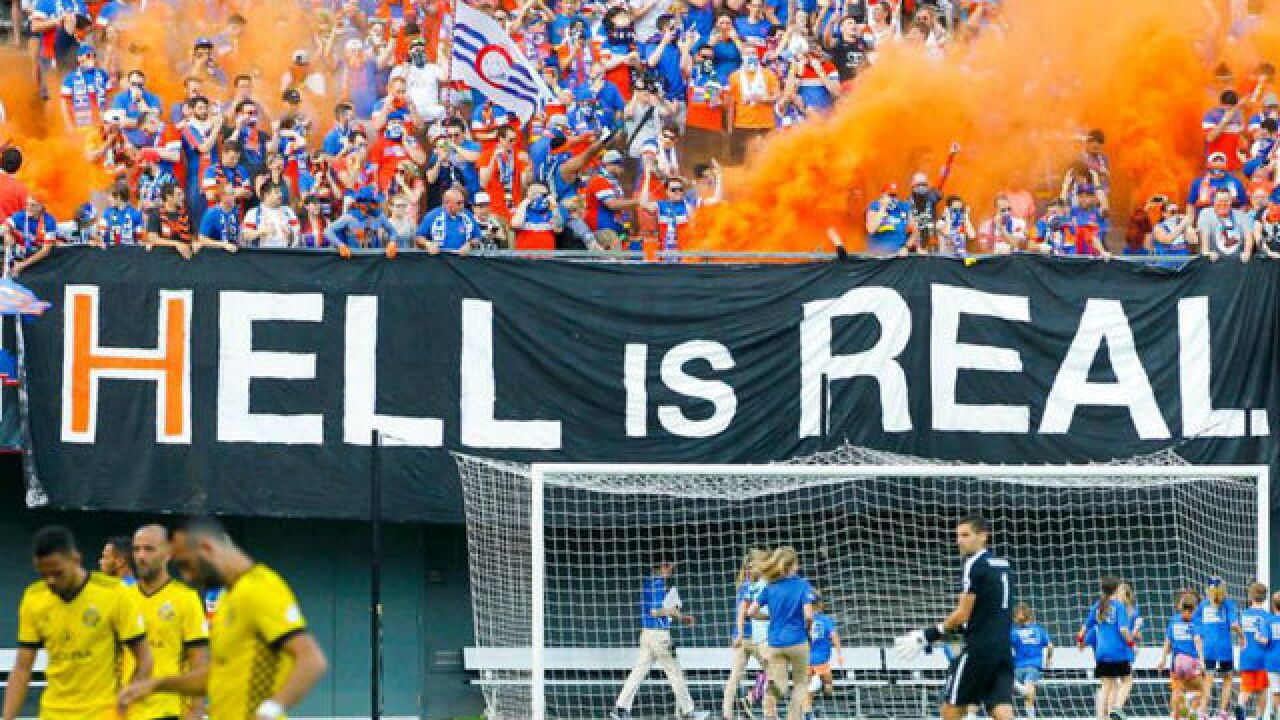 CINCINNATI -- FC Cincinnati is on the verge of losing its biggest Major League Soccer rival before the two teams are even playing in the same league.

The vote brings Crew SC a big step closer to moving to Austin, as PSV plans for the club to play in a temporary stadium there in 2019. FC Cincinnati, which leads the United Soccer League Eastern Conference, is set to play its inaugural MLS season next year.

“I love rivalries,” FCC coach Alan Koch said when asked about whether he hopes the Crew stays in Columbus. “We've obviously played them in one competitive game in (the 2017 U.S.) Open Cup, but we went up earlier this year and played against them in a friendly and it's great having other professional clubs nearby because you obviously have those rivals, but you can also be there to help each other out. We were able to go up there on a Sunday and play some guys that hadn't played many minutes for us and they played guys that hadn't played for them, so it's great to have those nearby relationships.”

Last summer in the fourth round of the U.S. Open Cup, the two clubs played in the first ever “Ohio Derby,” which quickly took on the nickname “Hell is Real Derby” because of the infamous sign on I-71 between the two cities.

FCC stunned the Crew 1-0 in front of an electric crowd of 30,160 fans, which then was a modern era, non-finals Cup attendance record that far surpassed expectations for a midweek, non-league game.

The teams did not match up in this year’s Cup, but were hoping for at least one more meeting.

“It goes without saying that the whole situation is unfortunate,” FCC season ticket holder Patrick Lahni said. “We saw what could be during the Open Cup last year. It was an amazing experience and atmosphere. The Hell Is Real derby could be one of the best rivalries in the country and both cities could potentially benefit. I would love for MLS to give it a chance.”

Precourt’s plans to move to Austin came with several bumps and delays.

The vote was originally expected to happen last week but council members decided they needed more time to sort through proposed amendments, some of which Precourt came out and said he would be opposed to, such as an increase in rent.

The meeting Wednesday in Austin to approve a heavily changed version of the term sheet for the lease took about five hours, as 19 backup amendments were added to the discussion prior to the start.

Though the term sheet is not a legally binding document, it outlines the major details of a 20-year lease (with three additional 10-year option periods) and could serve as a route to a final lease and development agreement. PSV has indicated it would pay for a $200 million stadium provided it got a stadium agreement on city-owned land.

“My belief at this point is the city staff did an incredible job negotiating this,” Austin city mayor Steve Adler said during the meeting, which was streamed live online. “This is the best deal of its kind in the country. I think it delivers something this city needs.”

Koch said he is aware of the Crew’s current situation but doesn’t monitor it closely.

The Crew has the lowest attendance in MLS, averaging just 11,567 fans, which is down from 15,439 last year. Support was dwindling at home games even before that, which was one reason Precourt said he wanted to move the club.

Attendance likely took an even bigger hit as a result of Precourt announcing in October he was looking to potentially move the team, though a legal battle emerged and still remains to try to keep the team. A group called “Save the Crew” last week announced plans for a new downtown stadium in a location more like what MLS wants for its teams, and the city wants a chance to find a local ownership group to take over the club instead of letting Precourt just take the team elsewhere.

The Crew was a founding member of MLS when the league debuted in 1996. Precourt, who is from California and has no ties to Columbus, bought the team for $68 million in 2013. The current expansion fee is $150 million, which is what Cincinnati is paying to join the league next year.

“I'm empathetic to Crew fans,” Lahni said, noting Columbus helped lay the groundwork for teams like FCC to form. “I've never had to experience having a team taken from me nor would I want to see that happen to our potential frenemies to the north. Honestly a lot comes down to professional teams pitting one city against another. It's a disgusting tactic. It's been pretty obvious PSV wasn't trying to set the Crew up to succeed in Columbus.

Koch said he can’t imagine FCC fans ever having to worry about their team moving from Cincinnati but also said there are never any guarantees. FCC is averaging 27,131 fans a game.

“I wasn't in Ohio when the Crew started so I don't know what their fan base was like then, but I think it would be very difficult to see something that just continues to grow so much like in Cincinnati to think that could ever happen here,” Koch said. “But, of course, we can't predict the future.”