Fay: There are a lot of questions for Marvin Lewis and a lot of football-speak for answers 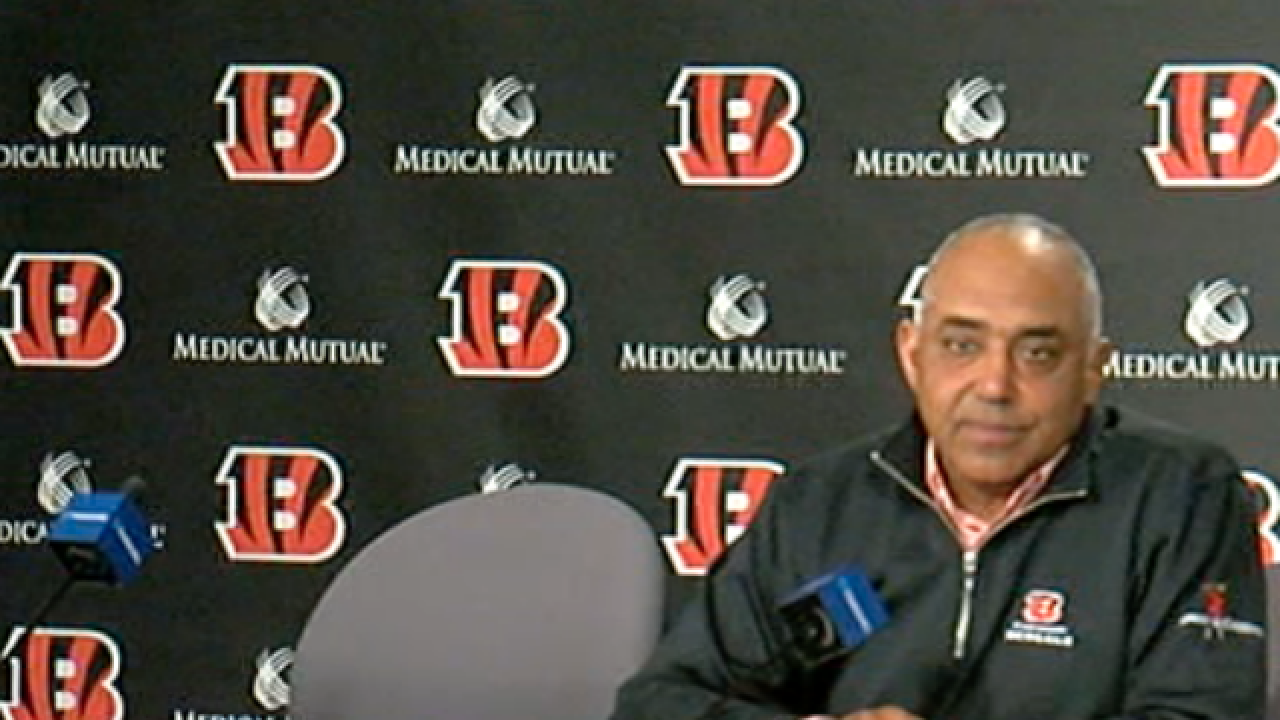 Copyright 2018 Scripps Media, Inc. All rights reserved. This material may not be published, broadcast, rewritten, or redistributed.
<p>Bengals head coach Marvin Lewis at a press conference on Jan. 3, 2018.</p>

CINCINNATI -- If you thought Bengals coach Marvin Lewis was going to say something earth-shattering at Wednesday's press conference, you were disappointed.

If Lewis got any concessions from owner Mike Brown during that pow-wow on Tuesday, he didn’t get into specifics.

Meet the new boss, same as the old boss.

“I'm excited to get back to work at what I frankly set to do back in ’03,” Lewis said. “I’m a much better football coach now than I was back then. We’ve got to get the football team back and better and improved. Back to the brand of football and how I perceive football and how we needed to play football year after year.

“That’s to be more physical. Be more attentive to the details of our job. And frankly, get after it when the time comes.”

I’ll coach them up better and the wins will come. There you have it. Do you want the number for the season ticket office?

Whatever Lewis said was not going to sway fans. The collective mindset of Bengal-fan is made up on Lewis. The only way he can change it is by winning -- and winning in the postseason.

He knows that. He said as much when asked about the fans.

“There’s no magic words,” he said. “We didn’t meet our expectations at all this year. I understand that. If you’re a fan, you’re a fan. Let’s get on and let’s go.”

“No doubt in my mind that what Mike Brown’s goal is to be world champions,” Lewis said. “We spent the last two days -- three or four times through those days -- talking what we felt like were the things we need to get better. Why and how.

“That’s only thing the man thinks about -- having a championship organization.”

Brown, of course, didn’t speak to the press Wednesday. But Lewis said he didn’t go into the meeting with a list of demands. Remember, he could have walked away. His contract was up.

“I don’t think I went in thinking I was going to win anything,” Lewis said. “This is a partnership. I’ve been entrusted to do a job. They believe in me. They had to come out of the meetings with me and feel like: No. 1, I wanted to do the job; and No. 2, I would get the job done.”

Brown is not swayed by fan opinion, media opinion or the opinion anyone outside the executive suite at Paul Brown Stadium. Thus, he made a decision that virtually no one in his dwindling fan base likes.

Lewis says that’s not unique in the NFL.

Lewis said he never considered walking away, despite the report by ESPN three weeks ago that he was leaving.

Lewis knows that the status quo -- even the best days of his reign here -- aren’t good enough.

“I have to make it different,” Lewis said.

Lewis spoke mostly about football: coaching better, mostly, without going into specifics. He downplayed upgrading the facilities and the like.

“All that stuff is nebulous whether it means wins or not,” Lewis said. “I’ve coached in (three) teams in this division. That’s got nothing to do with winning. Winning is done out there in those classrooms and the practice field and in games on Sundays. The rest of that stuff can help. We do everything we can to aid our players in that way.”

The biggest news Wednesday was that offensive line coach Paul Alexander is not some coming back after 24 years with the team. Bill Lazor, promoted to offensive coordinator in Week 2, is returning. Defensive Coordinator Paul Guenther is talking with Oakland about a job. Lewis said he’d welcome Guenther back.

The one thing Lewis did get is a two-year deal. That allows him to build a staff more easily.

Lewis said that the team will be more active in free agency.

Looking at this year, the Bengals ignored the offensive line in the draft and only added Andre Smith through free agency. The line struggled from the start, getting the season off track to point were it was unrecoverable.

Lewis was gracious and almost completely non-condescending Wednesday. He did bristle a bit at a fan question relayed from a reporter about discipline.

"Discipline is a big word,” Lewis said. “But if you look at this team it has been one of the least-penalized teams in the National Football League... It’s easy to point to one or two things.”

Another fan wanted to Lewis to be more aggressive.

“If I act like any idiot on the sideline and lose my head, how do they think guys on the field will (react)?” Lewis said. “ ... guys who scream and yell all the time don’t stay in these jobs long.”

In other words, Lewis isn’t going to change. He’s the same guy he was when he was hired 15 years ago. But he says he’s a better coach. How so?

“I think No. 1 you’re able to deal with the ebb and flow of the season,” Lewis said. “Smooth those things out. I think that’s important. You’re going to have to overcome injuries. Nobody goes into a panic mode. We’re going to make the next guy better. That’s how I was brought through coaching. It’s got to be done through the work and the toil.”