Fay: Marvin Lewis' tenure with Cincinnati Bengals is a hard one to judge 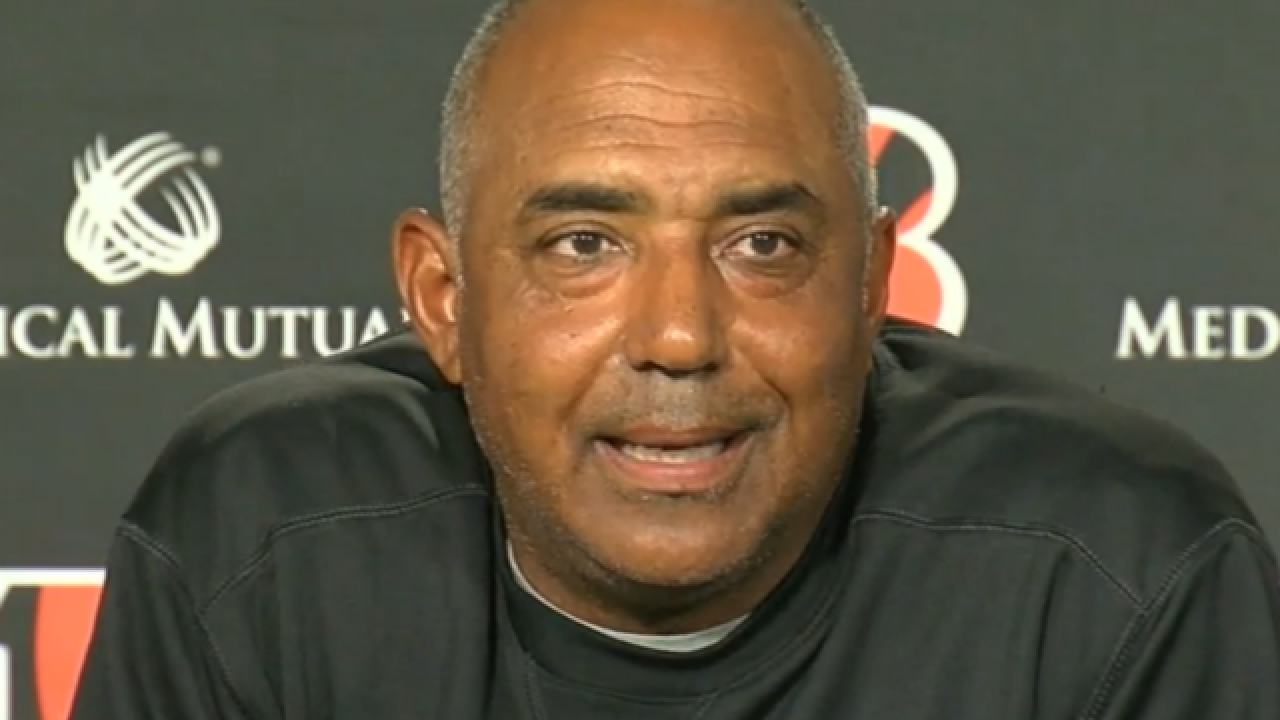 Copyright 2017 Scripps Media, Inc. All rights reserved. This material may not be published, broadcast, rewritten, or redistributed.
<p>Marvin Lewis</p> 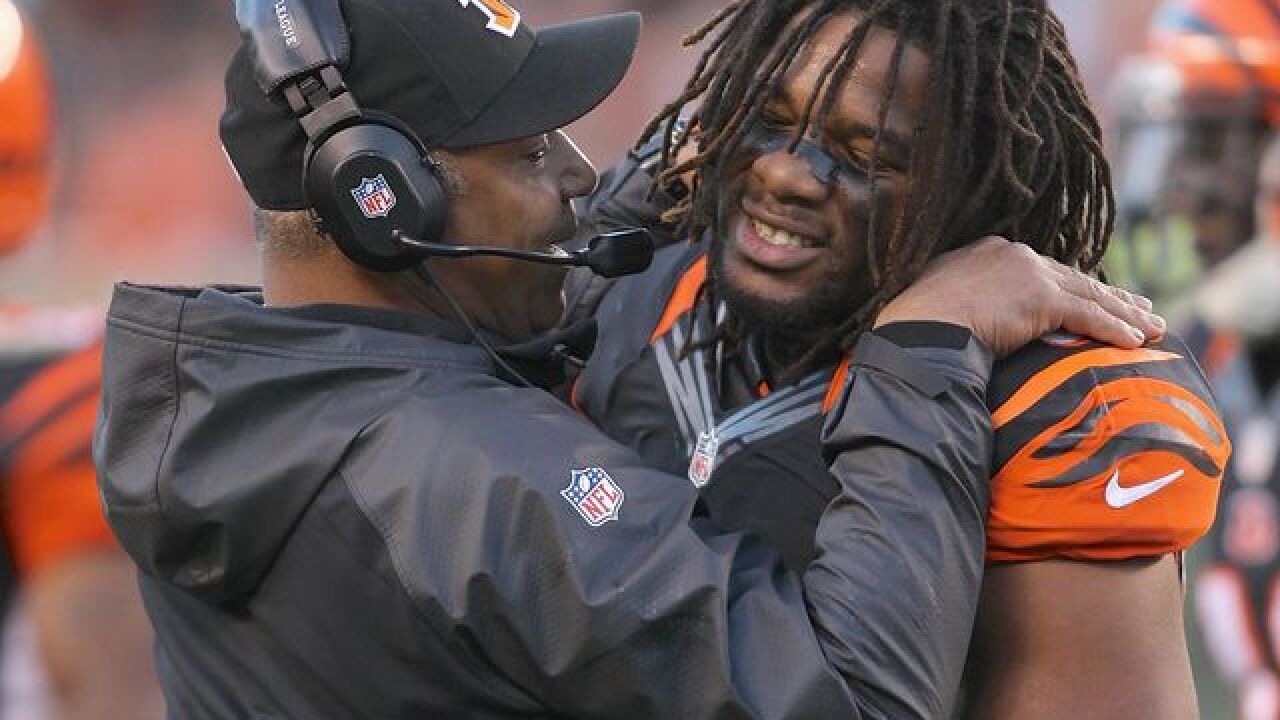 CINCINNATI -- This was supposed to be a story looking back on the Marvin Lewis Era as it ended.

Of course, it did not end. Lewis will coach the Bengals for at least two more years. The club announced on Tuesday he had signed new contract. That came three weeks after the ESPN report that he was walking away after 15 years.

The report was either wrong or Lewis changed his mind.

But the story of Lewis’ impact on the franchise is still relevant in the wake of his return. “Relevant” is a good word. Lewis made Bengal football relevant again. He lifted the team out of the lost decade of 1990s. He took the team from a laughingstock to a perennial playoff team.

He had the best sustained run of any coach in club history. He won more games than any coach in team history.

But he lost all seven playoff games.

For his story arc to change, he’s going to have to win a playoff game in his third go-round as Bengal coach. Yes, third. He was hired in the 2003, nearly lost his job in the 2010 and nearly lost it again over the last couple of weeks.

He’s got to win in January this time. It’s as simple that.

But even if Lewis had stepped away or had not been asked back, his impact on the franchise would have been huge. If fact, it’s safe to say he had more impact than any coach other Paul Brown himself.

The Bengals were a running NFL joke when he arrived. The three coaches that preceded him had a combined 52-124 record. When Lewis was hired in 2003, the Bengals were coming off a 2-14 year and hadn’t had a winning season since 1990.

He did that by changing the culture of the franchise.

“When he first came in, he said, ‘My thing was uniforms aren’t jinxed, organizations aren’t jinxed, players aren’t jinxed,’” said Dave Lapham, the former Bengal and current radio analyst. “‘It’s how you go about your business. It’s how you approach things.’ No question, his goal was to get a different mindset among the players and get players who he felt he could influence and work with.

“He definitely changed the culture and went about it very quickly. To go from 2-14 to 8-8 is one type of accomplishment -- to get it turned around quickly, but then to sustain it.”

Lewis’ first job was to convince the Brown family to do things in a different way. The Bengals were old-school before old-school was a term. Bengals founder Paul Brown basically invented pro football. But he ran a bare-bones operation. That continued under his son Mike.

Lewis was an outside hire. His three stops as an NFL assistant were at Pittsburgh, Baltimore and Washington, three franchises with Super Bowl wins.

Lewis was best known as the architect of the defense for the 2000 Super Bowl-winning Ravens. But he wasn’t just an Xs-and-Os guy.

Lewis showed up for his interview with a laptop. That might not seem like a big deal in the smartphone age. But it had to say to Mike Brown and family: This guy does things in a different way.

One of the biggest changes: Lewis became the voice of the team. Brown rarely spoke to the media after the preseason luncheon during the Lewis years. That made Lewis the face of the team to the media. That didn’t always go well. More on that later.

The biggest thing Lewis did was get Brown to invest in ancillary things that had become part of standard operating procedure in the NFL. Things Paul Brown would have scoffed at.

“How much time have you got?” said former wide receiver T.J. Houshmandzadeh when asked about it on WLW’s Bengal Pep Rally Show. “I’ve said this before: Before Marvin got there, we didn’t even have Gatorade or water in the locker room. Marvin changed so much. We’re not even talking football. Things that people don’t think matter. But it matters, especially guys coming from other teams.

“He changed the culture.”

The Bengals did not stay in a hotel the night before home games. Houshmandzadeh told the story of bailing out an unnamed teammate at 2:30 a.m. on game day, getting breakfast and going directly to the game.

Lewis changed that, and a long list of other things to bring the Bengals into the modern era of the NFL. He changed the strength and conditioning program. Nutrition became a big focus.

The players once were on their own for breakfast and lunch. Now they have a world-class buffet with chefs to cater to their needs. The team has embraced sports science in recent years. The Bengals are using athletic tracking devices, which employ GPS technology , to manage practice volume and intensity on an individual basis. The devices placed in the shoulder pads measure the quality of a rep, based on the speed, and the quantity, total number of reps, in a practice or workout.

As things changed, word spread around the league. Free agents, good ones, began to sign with the Bengals.

The changes off the field led to wins on the field. Lewis took the Bengals to the playoffs in 2005 and 2009. He guided the franchise through the transition from Carson Palmer to Andy Dalton.

But five playoffs losses as well.

Lewis’ 0-7 postseason record will color his run here as much as anything. But the other thing that shaped fans’ opinions of him was his dealing with the media. Lewis often comes off as arrogant, sometimes prickly.

He’s loath to reveal much -- most NFL coaches are -- but it’s odd how Lewis can dismiss one question and embrace another. An example from last week:

Question: With Cedric Ogbuehi down for the rest of the season, how would you assess his second year in the regular rotation?

A few questions later, when Lewis was asked to evaluate William Jackson, he went into a long, detailed answer.

Bengals employees will tell you Lewis is great to work with, kind and gracious. The impact of his foundation on the area is huge.

But Lewis has never been beloved here because he doesn't come off as likable in his dealings the public sees through the media.

The players love Lewis as well, and endorsed his return (have you ever heard a player say he didn’t want a coach back?).

“He’s the same person for everybody," defensive end Carlos Dunlap said. "When he has a point, he’s going to get it across.”

Some would argue that Lewis is too much of players coach. That he's coddled players, that he's let players go too far -- from Chad Johnson to Adam Jones to Vontaze Burfict.

That's come out on the field at times -- most notably in the playoff meltdown to the Steelers two years ago. Jones and Burfict cost the Bengals the game, basically. The team is 13-18-1 since that game.

Had the Bengals hung on that day and won, there probably wouldn't have been talk about the end of the Lewis era.

The same can be said about any of the previous six playoff losses.

“That’s the fly in the ointment,” Lapham said. “It’s a big fly - not winning any of those playoff games. It definitely lessened the achievement of what he did. They put together the best five-year run in their history. The ’80s is the best decade with the two Super Bowl appearances. But over a long period of time, nothing is close to five straight playoff appearances.

“But, again, not winning playoff game, bowing out as early as they did, is obviously tough.”

Houshmandzadeh sees Lewis for much more than those playoff failures.

“He helped you grow as a man outside of football,” Houshmandzadeh said. “...He’s done a lot for the community. He’s never disrespected the Bengals or the NFL. He’s done a lot.

Now, Lewis gets another chance. In this go-round, he can change the way he’s remembered and put the franchise in an even better position.