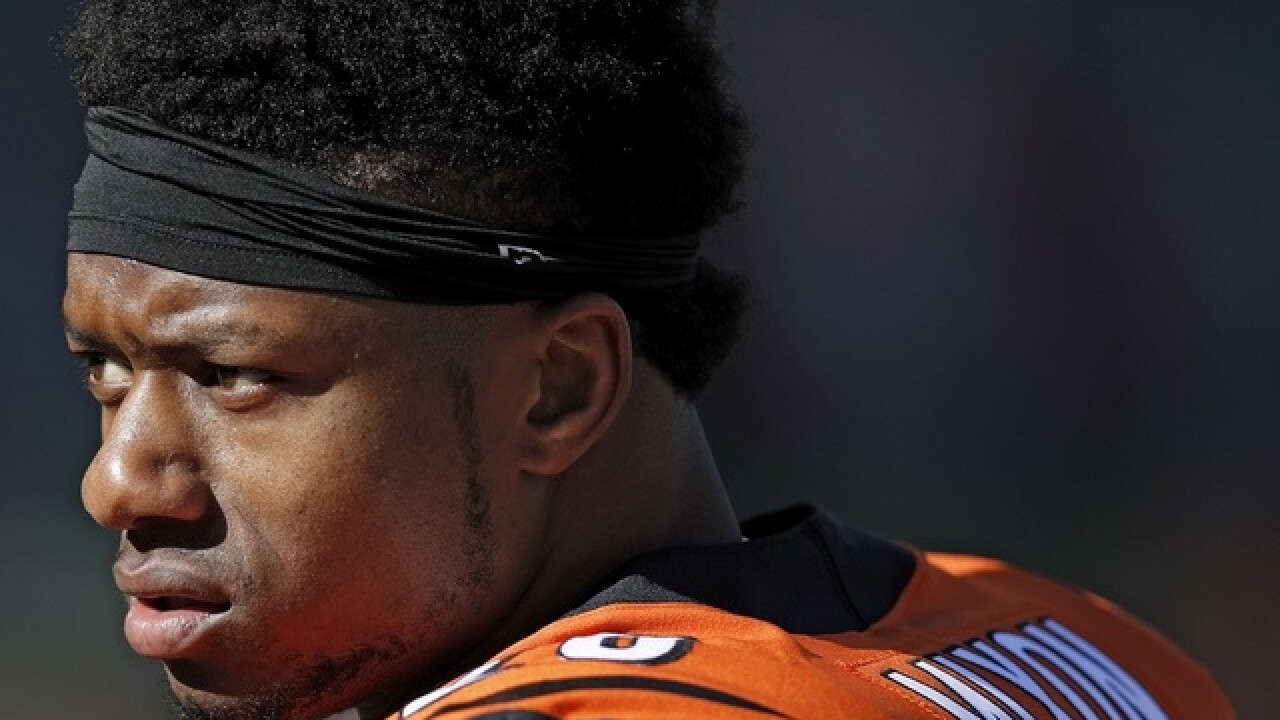 Copyright 2017 Scripps Media, Inc. All rights reserved. This material may not be published, broadcast, rewritten, or redistributed.
Joe Robbins
<p>CINCINNATI, OH - NOVEMBER 26: Joe Mixon #28 of the Cincinnati Bengals looks on before a game against the Cleveland Browns at Paul Brown Stadium on November 26, 2017 in Cincinnati, Ohio. (Photo by Joe Robbins/Getty Images)</p>

CINCINNATI -- After the 0-3 start and the clunkers in Pittsburgh and Jacksonville, the Bengals' season comes down to this: Beat Pittsburgh next Monday night and they're at .500 with a realistic chance of getting into the playoffs.

The Bengals' 30-16 victory over the Browns on a sun-splashed Sunday at Paul Brown Stadium put the season back in the salvageable mode. A win against the Steelers next week would make the Bengals 6-6 with four games to go.

"We've got to continue to win and see what happens," A.J. Green said. "We can't worry about our record. We've got to keep winning it week to week and let the chips fall and go from there."

The Bengals realize that they're lucky to be where they are. Buffalo holds the second AFC Wild Card spot at 6-5.

Everything hinges on beating the Steelers. Coach Marvin Lewis went so far as to admit that it wasn't just another game -- a rare thing for him.

There were some encouraging signs Sunday against the Browns, chiefly Joe Mixon's first 100-yard game. Mixon had 114 yards on 23 carries and caught three passes for 51 more.

It's hard to measure things against the Browns, who are 0-11, but it seemed to be a breakout game for Mixon, who came in averaging 2.9 yards a carry. Coach Marvin Lewis sees Mixon getting more consistent.

"Making the 4-yard gain an 8-yard gain and the 1-yard gain a 5-yard gain," Lewis said. "He got knocked back today and he gets frustrated a little bit. You can't get frustrated. Let the next run happen."

"We kept chipping away on those runs," Mixon said. "Our offensive coordinator kept talking about chunks and moving the chains. For him to call those runs so we could get going down the field was great. Our offensive line did a great job."

The Browns have struggled, but their rushing defense was only allowing 91.7 yards a game, the sixth-best in the NFL. The Bengals' maligned offensive line pushed Cleveland around.

"The biggest thing we talked about is, we wanted to finish at the end of those runs,"  center Russell Bodine said. "The line pushed. Push the whole thing. Every run's not going to be a home run, but push that 3 (yards) into 5 , that 5 into 7. Every yard counts."

The Browns looked like one would expect winless team to look -- complete with dropped touchdown passes, stupid penalties, dropped interceptions -- but they hung around.

The Bengals made this too close for comfort, allowing a 15-play, 89-yard drive that made a one-score game with 6:57 left. But they put the game away by running the ball down the Browns' throat.

Mixon ran it on back-to-back plays for 14 yards and 11 yards to finish the drive.

The other Bengals' highlight of the game: Green's leaping catch along the sideline near the end of the third quarter.

"When Andy Dalton threw the ball, there wasn't one person in the world that can make that catch and get both feet in bounds without question," Lewis said.

"I practice it all the time," Green said.

"We'll enjoy tonight, enjoy this win," Mixon said. "Tomorrow, we've got to get back to work. It's huge. We're going to focus on the Steelers."