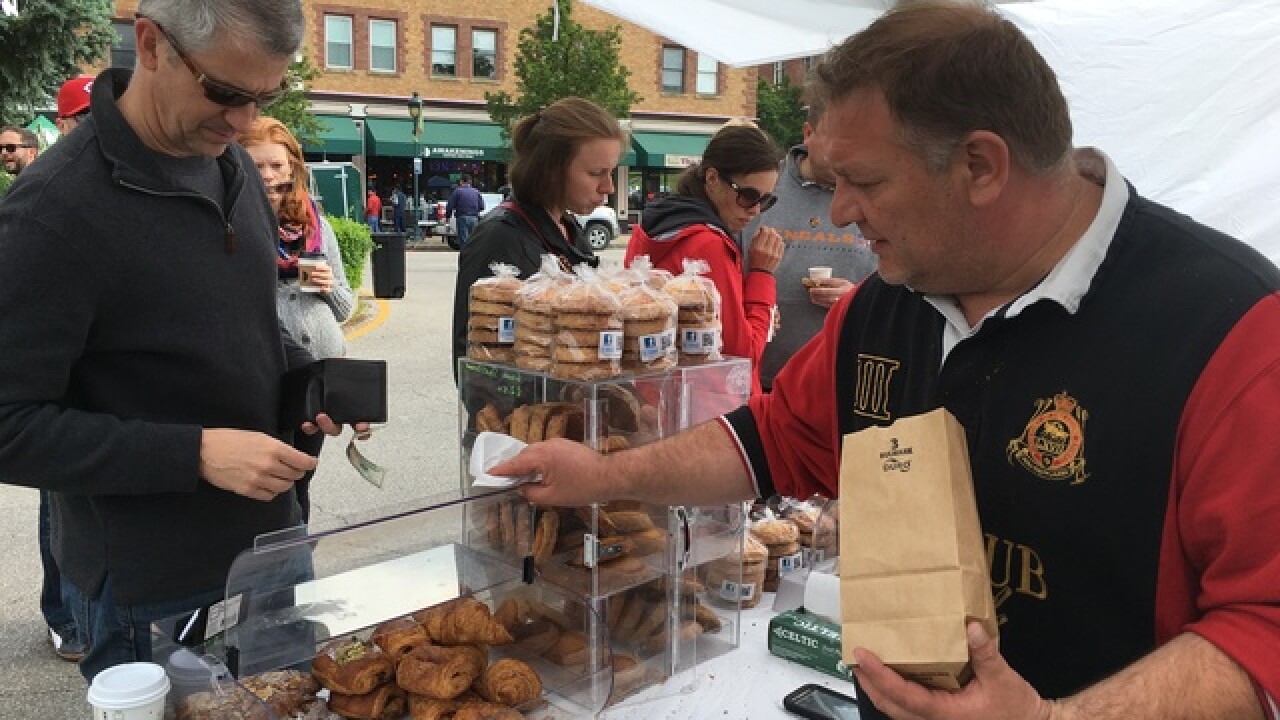 CINCINNATI -- Frederic Baudry gets up at 1 a.m. on Saturday mornings and starts baking in his kitchen. The croissants rise for two hours, then go into the oven at 3 a.m., so they will be fresh for the farmers markets.

At 5 a.m., he loads the van and heads to Findlay Market. Someone else will run his booth there, while he spends the morning under a tent at Montgomery Farmers Market, selling eclairs, cream puffs, shortbread cookies, and those freshly baked croissants. He calls his booth “The Cream Puff Revolution.”

”I always wanted to come in America and open my bakery one day,” said the professional baker with his distinctive French accent. “And the farmers market is a very nice way to start your business.”

Baudry’s dream is like that of many other vendors at the Tri-State’s 50-some farmers markets.

The markets have become an incubator for new businesses, and Baudry wants to use them to help grow his business into a bricks-and-mortar shop.

There are many examples of vendors that did just that, including Taste of Belgium, Happy Chicks Bakery, Chocolats Latour, Deeper Roots Coffee and Carabello Coffee.

Then there are others, like Blue Oven Bread and Grateful Grahams, which grew big enough using the farmers markets to also sell their products in other peoples’ stores.

“That’s how I started,” said Jean-Francois Flechet, who opened Taste of Belgium at Findlay Market in 2007. “You can develop a following by using farmers markets.”

Flechet may be the most successful graduate of the farmers market incubator. Taste of Belgium is planning a sixth location at The Banks.

What makes the markets such a good place to try out a new business?

“We want to start small,” Kevin Schmitz said after his first day at his first market selling organic microgreens. “Low overhead, test your product out, see how it works.”

“They can ask the patrons things and get feedback one-on-one with people. I think that helps if they’re going to move out to bigger and better things,” said Mary Ida Compton, who started Hyde Park Farmers Market with her friend Judy Williams in 2006.

“Start my own business with no overhead at farmers markets. Meet the people I need to meet most. And make a name for myself,” he explained.

In no time, the chef who graduated from the prestigious Culinary Institute of America became known as “The Hummus Guy” around the markets. Every week, he turned organic chick peas into a dozen or so creative flavors of hummus. But, a successful hummus business at markets was never his goal. It was just a good way to get started.

“It was only a summer business. I needed a year-round business.”

Last year, Snider made the leap from farmers markets and opened a farm-to-table style restaurant in Montgomery, called Fond. He buys most of his ingredients from the local vendors he met at the markets. He even sells some of their products in his restaurant.

And he still makes hummus every week for the farmers markets, which keeps him connected to his original customers.

“It’s hard. This is the hardest I’ve ever worked,” he said.

What does he think of food entrepreneurs using the farmers’ markets as he did?

“I get a lot of people that call, and somebody has tasted something they baked, and they thought it was great, and they should come to the farmers market,” said Compton.

But, as she knows, it’s not as easy as it looks. Running a small business at a farmers market is often a seven-day-a-week job. And to get to the next level and open a shop or a restaurant, “you’ve got to have a real commitment to what you’re doing,” Compton said.

What about Frederic Baudry and “The Cream Puff Revolution?” Will he join the list of vendors who started at farmers markets and then opened a store?

He has no doubts.

“I took the example of Taste of Belgium. He did the market like me,” Baudry said. “You see he succeeds so well. Why him and not me?”