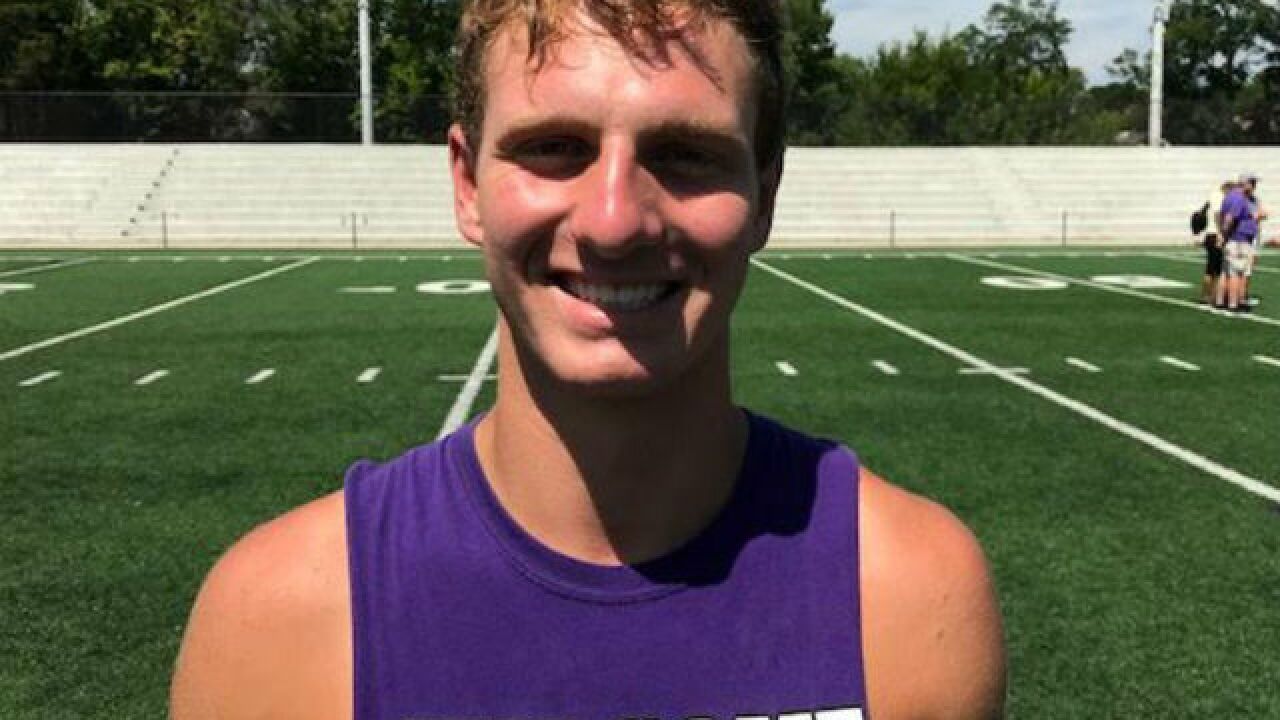 Copyright 2018 Scripps Media, Inc. All rights reserved. This material may not be published, broadcast, rewritten, or redistributed.
<p>Elder senior quarterback Michael Bittner was named the GCL South Player of the Year Wednesday morning. He has thrown for 2,235 yards this season. (Photo by Mike Dyer)</p>

CINCINNATI -- Michael Bittner didn't have a doubt about the outcome of Friday night's game in Indianapolis.

The Elder senior quarterback told his teammates the Panthers  would find a way to score on their final possession. They did just that.

The Cathedral public-address announcer mentioned the record in the postgame.

"That's pretty awesome, just being a part of this historic program," Bittner said. "It's a great honor to play for Elder."

Elder is the third local Ohio school to reach 600 wins, joining Middletown and Wyoming, and the 33rd school in all of Ohio to hit such a milestone. There are 718 schools in Ohio playing football this season.

"I think it goes to our kids and the blue-collar mentality," Elder athletic director Kevin Espelage said. "We're tough (and) hard-working, and we don't quit. I think you can argue that we've been pretty consistent over the years. Now, it may not be reflected in 9-1 or 8-2 records, but I think our opponents always walk away saying, 'That's a heck of a football team that's going to fight you until the end of the ballgame.'"

Elder (2-0) certainly dug deep to earn the win on the road Friday night. It may not have played its best, but the Panthers found a path to victory.

"It was a back-and-forth game, and we played it with a lot of heart and a lot of grit tonight," Bittner said.

The Panthers' defense made a significant stop late in the game to give Bittner an opportunity to score on a 1-yard run with 34 seconds left, which proved to be the difference. He was 11 of 19 passing for 176 yards and rushed for 52 yards and three touchdowns.

"Michael had another really good game, both passing and running," Elder coach Doug Ramsey said. "He is just so tough."

Junior Matthew Luebbe had 10 carries for 70 yards and a touchdown. Senior Kyle Trischler had six receptions for 105 yards.

The Panthers are 183-137-13 in the Greater Catholic League and have won 21 GCL titles, six city titles, five regional titles and two state championships. The 600th win is certainly very significant for the school.

"Milestones like this just make you think about the great tradition that is Elder football," Ramsey said. "I feel very lucky to be a part of such a great program."

"It's very exciting for players past, present and future to be a part of something that doesn't happen every year," Espelage said.

Oak Hills starts the season 2-0 for the first time since 2012 after the Highlanders defeated Dayton Dunbar 49-0. Senior quarterback Ethan Myers was 13 of 19 passing for 195 yards and two touchdowns. Junior wide receiver David Partin had three receptions for 102 yards.

Moeller remained undefeated with a 21-14 win over visiting Louisville Trinity. The game was called in the third quarter due to weather. Senior quarterback Mitch McKenzie threw for 165 yards and a TD. Junior Max Land had a 52-yard TD reception. Senior Luke Szabados had five tackles.

Fairfield junior tailback JuTahn McClain added scholarship offers from Purdue, Pittsburgh and West Virginia this week. He's got a big choice ahead: A day after his memorable performance at Centerville, where he earned 437 all-purpose yards and scored seven touchdowns, Maryland and Michigan decided to send him offers, too. Naturally, local schools also want him. The University of Cincinnati, Kentucky, Rutgers and Louisville have all thrown their hats in the ring.