Darrell Kelly: How local man graduated with a law degree, MBA from two different schools on one day

'He grew up with love' 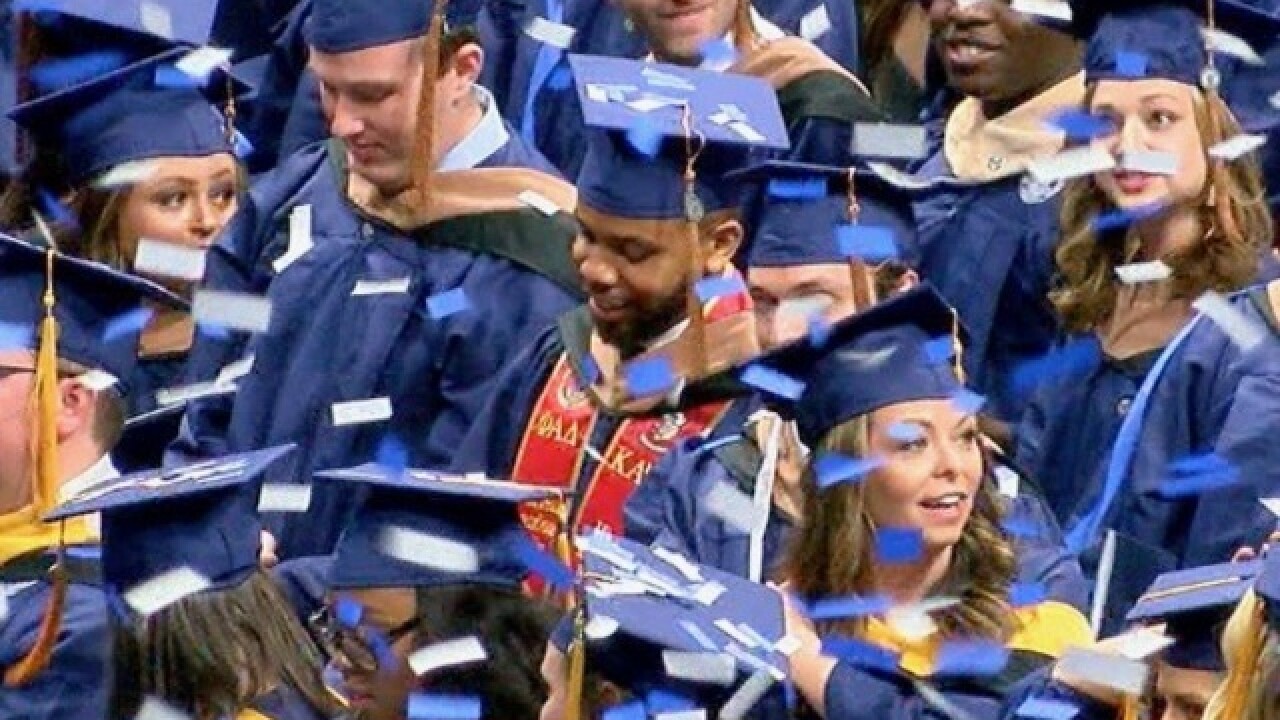 Copyright 2018 Scripps Media, Inc. All rights reserved. This material may not be published, broadcast, rewritten, or redistributed.
Jake Ryle | WCPO
<p>Darrell Kelly, center, at his graduation from Xavier University's Williams College of Business with an MBA.</p> 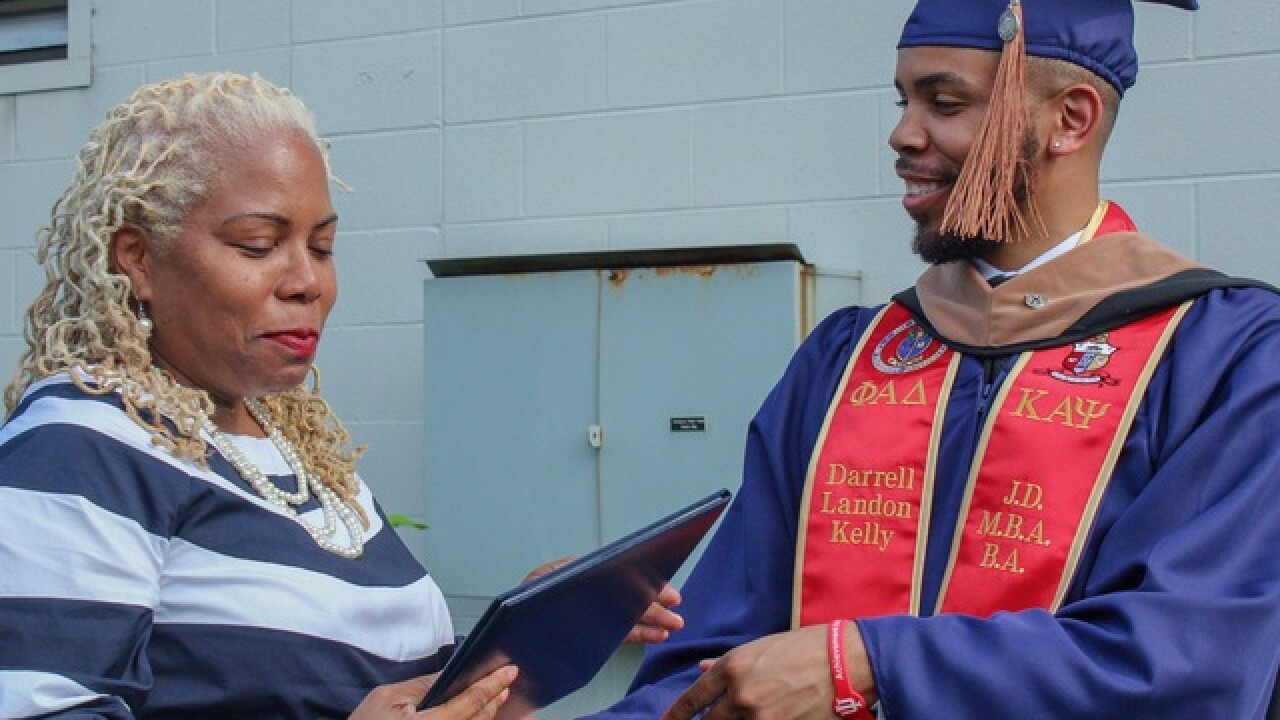 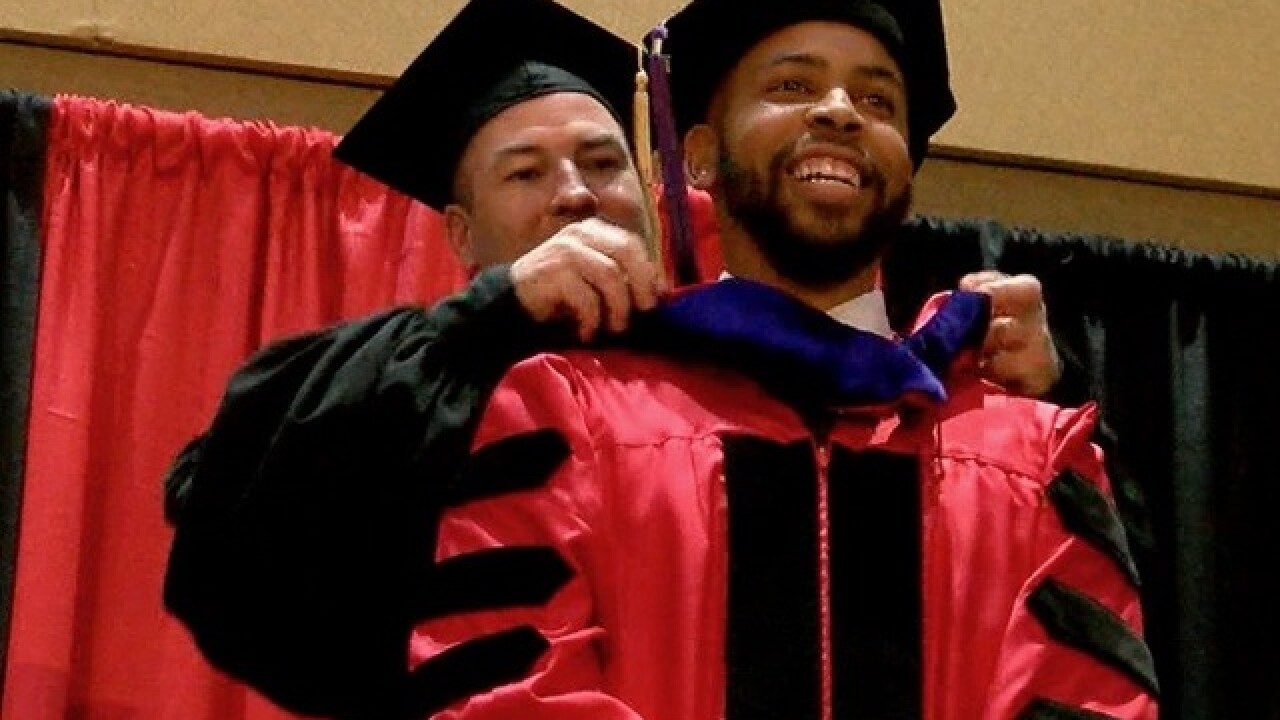 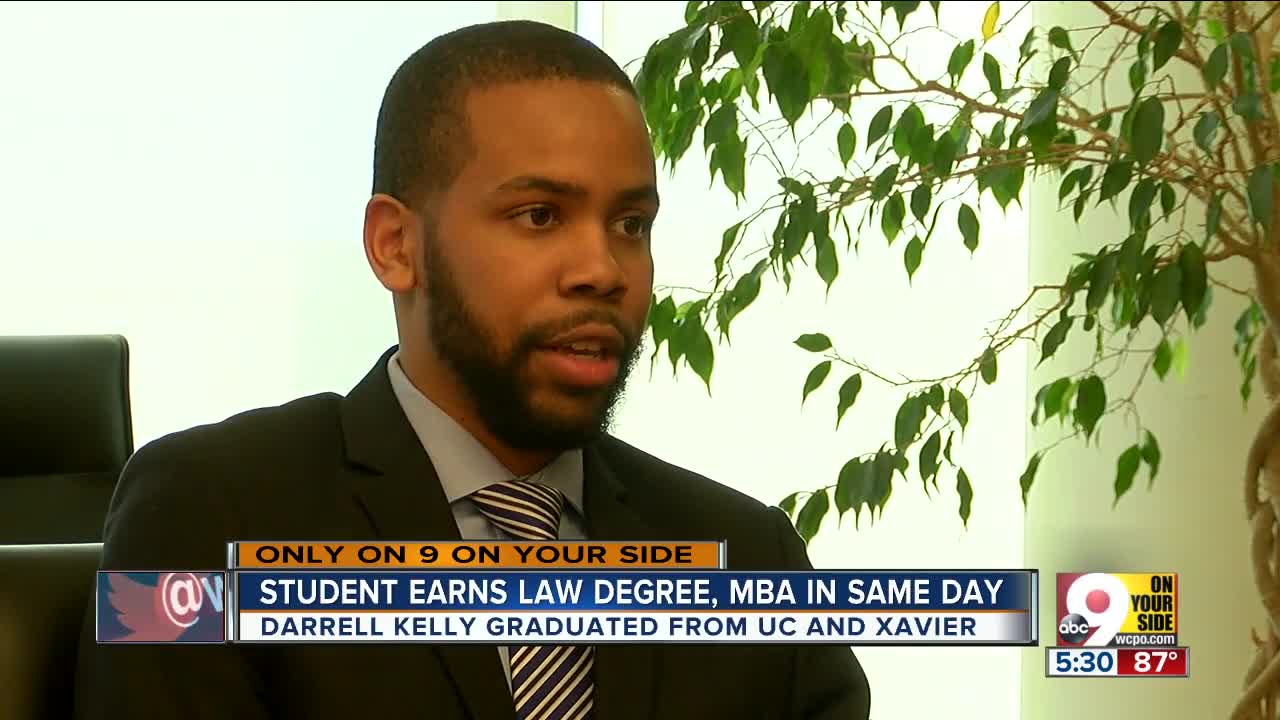 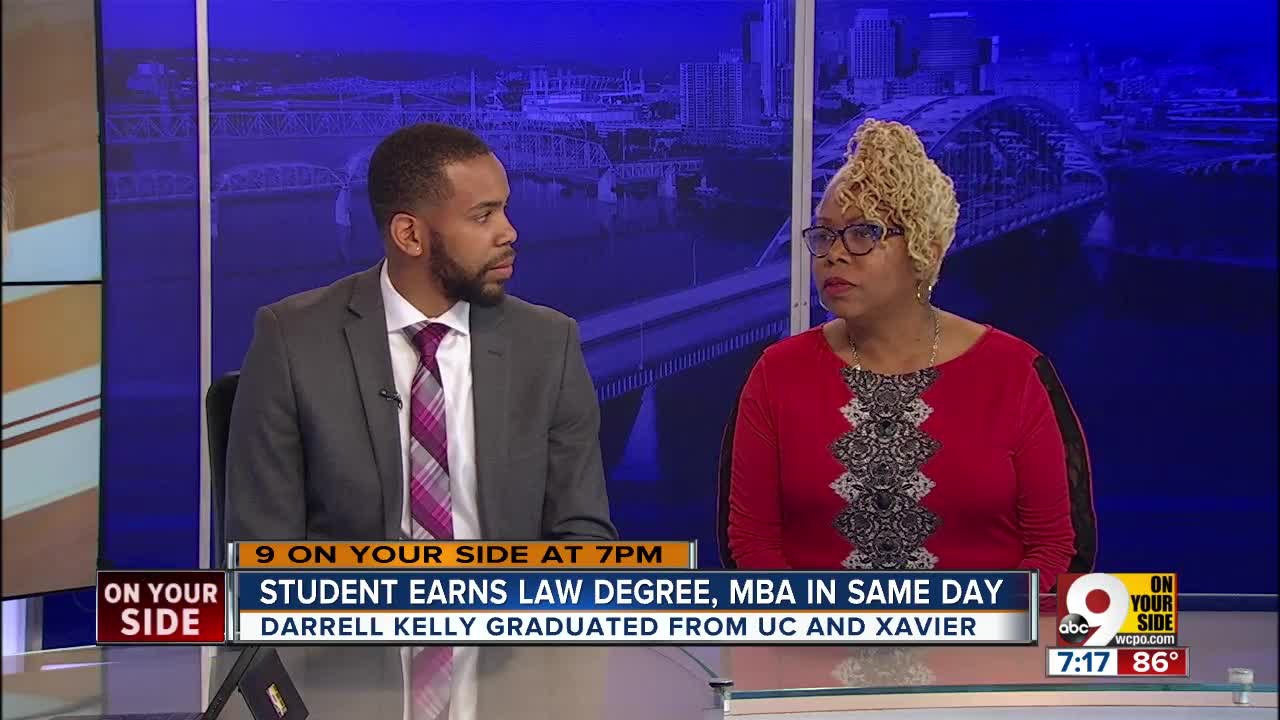 CINCINNATI -- Darrell Landon Kelly had little time to bask in the honor of his graduation from the University of Cincinnati College of Law on Saturday.

Kelly and his family had to race from the law school ceremony at the Northern Kentucky Convention Center in Covington to the Cintas Center in Evanston so Kelly could get his Master of Business Administration from Xavier University’s Williams College of Business.

Kelly got two advanced degrees from two universities on one day. And he’s only 24 years old.

“Some kids do great. Some kids do wonderful. But when you go past great and get your master’s and turn into a lawyer, you do like the Bible says: exceedingly and abundantly,” said Richard Layson, who has known Kelly for most of the young man’s life. “That’s where he went -- exceedingly more than we ever asked for.”

How Kelly got there is a story of hard work and determination, to be sure. But it’s also a story about the power of family, community and, above all, a mother’s love.

“I was born to five generations of love, and I passed that on to them,” Lisa Kelly said of her son, Darrell Landon Kelly, and his older sister, Jazmoné, who is in medical school. “If he’s tall, it’s because he’s standing on tall shoulders. He’s big because of the village, because of the friendships. He grew up with love.”

Kelly said he appreciates every bit of it, especially all his mother has done for him.

“It’s time for me to stand and leave the nest,” he said. “She’s instilled me with all these tools and has guided me for so long.”

And she’s done it all as a single, working mom.

Lisa Kelly divorced when her son was 9 months old, and her daughter was a toddler. She moved with the children less than a year later from Atlanta to Cincinnati, where she could raise the kids near her parents and extended family.

Her son, whom she calls Landon, was bright from the start. He began attending the now-closed Marva Collins Preparatory School when he was three. Layson met him a few years later, when the boy was just 5 or 6 years old. That’s when he and his older sister started playing football for the Avondale Lions, which Layson coached.

“He was a smart little dude,” Layson said. “Him and his sister, Jaz, from the time they were six, they knew the periodic table. They learned that at Marva Collins.”

Kelly was smart in other ways, too. He could hear a play just once and understand how to execute it on the field. And he could think on his feet about the best ways to be successful during a game.

“A big dude is right there, and we’d say: ‘Go block him,’” Layson recalled. “Lan got enough sense and he’s smart enough to say: ‘That dude way bigger than me. I’m going to try to block him on the side so the play can get around.’

“That’s how his mind works, and that’s what you want kids to do,” Layson said. “Have their own identity.”

As a boy, Kelly also played basketball and soccer and ran track. Along the way, he also learned how to play saxophone, too.

For high school, he went to Cincinnati’s School for the Creative and Performing Arts for a couple of years before his mom moved him to Walnut Hills High School.

He backed away from sports a bit at that point to focus on academics, Layson said.

Kelly was just 16 when he gradated from high school in 2010. He moved to Washington, D.C., to attend Howard University, where he graduated in 2014 with an undergraduate degree in radio, television and film.

Howard had a program where students could get an MBA and a law degree at the same time, and that appealed to Kelly.

He decided to start the MBA at Xavier so he could live at home and save some money. He eventually decided it would make more sense to stay here to get his law degree, too.

Kelly’s original plan was not to graduate with both degrees at the same time. But law school slowed down his studies in business school.

He didn’t realize until about six months ago that both graduations would be happening on the same day.

‘A lot to balance’

Sean Mangan, a law professor at UC, said Kelly stands out because of his rare combination of intelligence and humility.

“He’s one of those people who’s serious without taking himself too seriously,” Mangan said. “He needed no help from me in almost any of the stuff he did.”

In the seven years that Mangan has been teaching at UC, he said he can recall only three people who have tried to earn an MBA while being enrolled in law school, and Kelly is one of them.

On top of his studies, Kelly has two part-time jobs: one as a legal extern at Baker & Hostetler LLP Downtown and one as a graduate assistant at Xavier.

Kelly said he has managed it all by being strategic.

He learned early on that he needed to plot out everything he needed to do for all his classes in both programs and take the work one step at a time.

“There’s only so many hours in a day,” he said. “So if you want to get to this end goal, sometimes you have to create a hierarchy of your assignments and work your way down but understand what the risks are and really plan it out so that you’re successful.”

He also learned the importance of taking time for himself, even if that’s just a few minutes to warm up “his chops” on his saxophone or take a two-mile run.

“It’s true what they say about law school. You sit around a lot,” Kelly said with a smile. “I had a few pounds to shed.”

A tradition of kings and queens

Don’t mistake the self-deprecation for a lack of confidence.

Lisa Kelly raised her children to understand they should be proud of their lineage and their heritage, going back hundreds of years before slavery.

She wanted her children to know in their bones that they were powerful and capable before society started giving them other messages, she said. It's the same kind of message she now gives her fifth- and sixth-grade students at Rothenberg Preparatory Academy in Over-the-Rhine, where she teaches math.

“You are not necessarily special or exceptional,” she would tell her children. “You are a king. You are a queen. You’re continuing the tradition. There’s nothing you can’t do.”

She was raised the same way.

“I came from five generations of strong women,” she said. “My great-great grandmother was born in 1885. I used to comb her hair. I used to talk to her. And her daughter bought property because she said you should always have a place to stay.”

Lisa Kelly’s mother worked at General Hospital, back when that was the of the name of the University of Cincinnati Academic Health Center, so her children could go to UC for free. She and her sisters all went to college, and she and one of her sisters have master’s degrees. Then her mom -- Darrell Kelly’s grandmother -- went back to school herself and got her bachelor’s degree from Xavier when she was 73.

Those are the strong shoulders that Kelly stands on, he said, and he doesn’t take any of it for granted.

“I want to make my grandmother, and of course my mother, and my family proud,” he said, “by continuing on that legacy and that tradition.”

Lisa Kelly is proud, to be sure.

“I raised him, and it’s not a big deal,” she said. “You can be a single mom. You can raise your kids. They can go to college. You can survive, and you can thrive. In my world, he’s the norm.”

Be sure to watch 9 On Your Side at 5:30 p.m. to see this proud mother's reaction to her son's achievements.