Cradle Cincinnati: 2017 annual report shows much work ahead but reason for hope

'Awful and not nearly good enough, but far better' 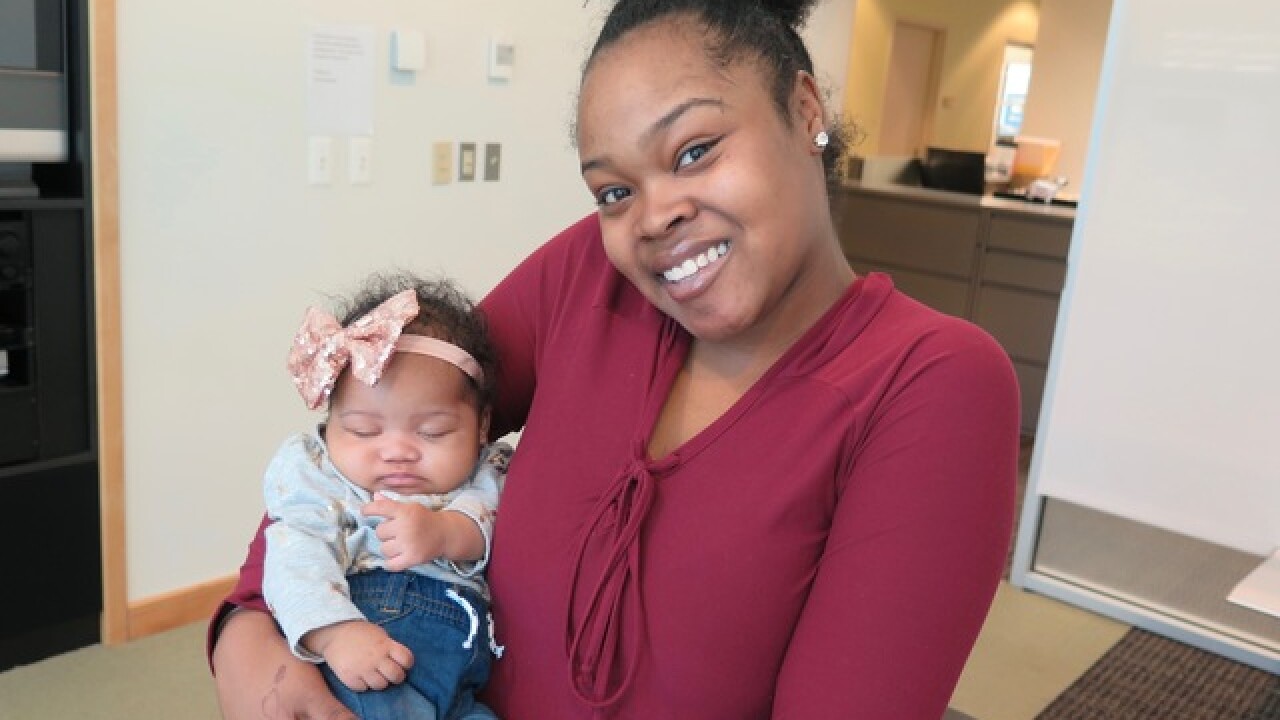 Copyright 2018 Scripps Media, Inc. All rights reserved. This material may not be published, broadcast, rewritten, or redistributed.
Lucy May | WCPO
<p>De'Zhai Bennett and her baby, De'Zharia, on April 11, 2018.</p>

CINCINNATI -- De’Zhai Bennett had been smoking for years when she found out she was pregnant.

Learning about her baby was the motivation she needed to quit. She began cutting back on the number of cigarettes she smoked each day until she stopped completely.

“It was tough,” she said. “But once you have somebody else’s life to think about, you don’t really care. All that goes out the window.”

“She came out perfect,” Bennett said. “My precious little angel.”

Across Hamilton County, more and more women are kicking the habit early in their pregnancies, and the county’s infant mortality rate is improving as a result. In fact, the maternal smoking rate has dropped 30 percent over the past five years, according to data to be released this afternoon by Cradle Cincinnati, the nonprofit organization working to reduce the number of babies in Hamilton County that die before their first birthdays.

“Women are amazingly strong and profoundly resilient, and there’s not many things a woman cares about more than her child,” said Dr. Elizabeth Kelly, the maternal health lead for Cradle Cincinnati and director for the Center for Women’s Health at UC Health. “So there’s this intense desire to do the right thing.”

While 15 percent of Hamilton County women reported smoking during the second and third trimesters of their pregnancies in 2008, that rate has fallen steadily. It was 8.7 percent of women in 2017, according to Cradle Cincinnati’s newest annual report.

But there still is a long way to go: 97 Hamilton County babies died last year before their first birthdays, according to the report. And while the county’s infant mortality rate has improved, it remains far above the national average.

“We have to hold two truths in our hands at the same time on this," said Ryan Adcock, Cradle Cincinnati’s executive director. "One of those truths is that we are seeing great collective effort around this, and that is showing us there is real reason for hope.

“The other truth, and the truth that needs to motivate us more, is it’s still true that in 2017, far, far, far too many babies died in Hamilton County.”

Infant mortality is reported as the number of infant deaths per 1,000 live births. Cradle Cincinnati keeps track of the rate over five-year periods to measure trends in how Hamilton County is doing.

That’s a significant improvement over the county’s 575 infant deaths between 2008 and 2012, which resulted in an infant mortality rate of 10.2 deaths per 1,000 live births.

But it’s still far higher than the national infant mortality rate of 5.9 deaths per 1,000 live births.

Those numbers appear even starker when you see the how many babies died in Hamilton County each year before their first birthdays:

When Hamilton County and UC Health signed the agreement to form Cradle Cincinnati in 2011, Hamilton County had the second-worst infant mortality rate in the nation, Adcock said.

He estimates that the county now ranks about 23rd worst in the U.S.

“So this is awful, and not nearly good enough, but far better than second,” he said.

The neighborhood of Avondale, for example, has effectively eliminated “extreme” preterm births and has seen the number of infant deaths there drop significantly as a result.

The biggest factor in the deaths was extreme preterm birth, or babies born before the end of the second trimester.

An intense community effort called “Start Strong” focused on reducing extreme preterm births, and the neighborhood has not had a single baby born before the end of the second trimester in more than three years.

RELATED: Want to save babies? Talk to their moms

Because of that success, the state of Ohio will fund the spread of Start Strong’s work into two new communities: Winton Hills and North College Hill.

That’s not the only hopeful news.

One of Cradle Cincinnati’s most important public awareness campaigns has been to educate families that babies sleep safest alone, on their backs and in an empty crib. The leading cause of sleep-related deaths in the county is suffocation because babies are sharing a bed with an adult and the adult rolls over onto the baby.

The latest numbers showed an average of 12 babies died each year from sleep-related deaths over the past five years.

Another bright spot: Last year saw a 21 percent improvement in the percent of women who got prenatal care in a timely fashion, with more women than ever before getting prenatal care during their first trimester. Adcock noted that is happening at a time when the opioid crisis could be making women reluctant to see doctors early in their pregnancies.

But the reduction among the number of pregnant women who smoke is one of the most hopeful findings in Cradle Cincinnati’s report.

Kelly said she thinks those improvements have come as the result of the collective effort that health care providers, community health workers and so many others have put into the work.

And just like the programs that Kelly recommends to her patients, the Freedom from Smoking program encourages participants and offers support instead of shaming them, Collins said.

“It’s creating new techniques for them to handle stress,” he said.

While it’s better for women to stop smoking before they become pregnant, their babies can benefit as soon as they quit, said Dr. Marianne DiNapoli, an OB-GYN who works at the Cincinnati Health Department and UC Health.

“As soon as you stop having that last cigarette, the blood vessels dilate,” she said.

That increases the blood flow to the baby as it grows inside the mother’s womb.

Because babies grow the most during the third trimester of pregnancy, DiNapoli said she encourages her patients to stop smoking before then to reduce the chances for a preterm birth or low-birth-weight baby. But the sooner they stop, she said, the better.

Bennett said she is happy she stopped smoking when she did. And she was glad to get resources from the Cincinnati Health Department’s Elm Street Health Center.

The health center gave her a toll-free number she could call to talk about her desire to smoke, along with written materials.

Her doctor and nurses also celebrated every time Bennett was able to cut down on her smoking, she said, encouraging her to keep going.

But mostly, Bennett said, wanting the best for her baby was her biggest incentive.

“You hear the stories of everybody else who had kids and were smoking, how they were smoking when they were pregnant and what happened,” she said. “I didn’t want my baby to go through that.”

More information about Cradle Cincinnati is available online. The organization’s full 2017 annual report will be available on its website, too.