'We have a lot of moms that need help' 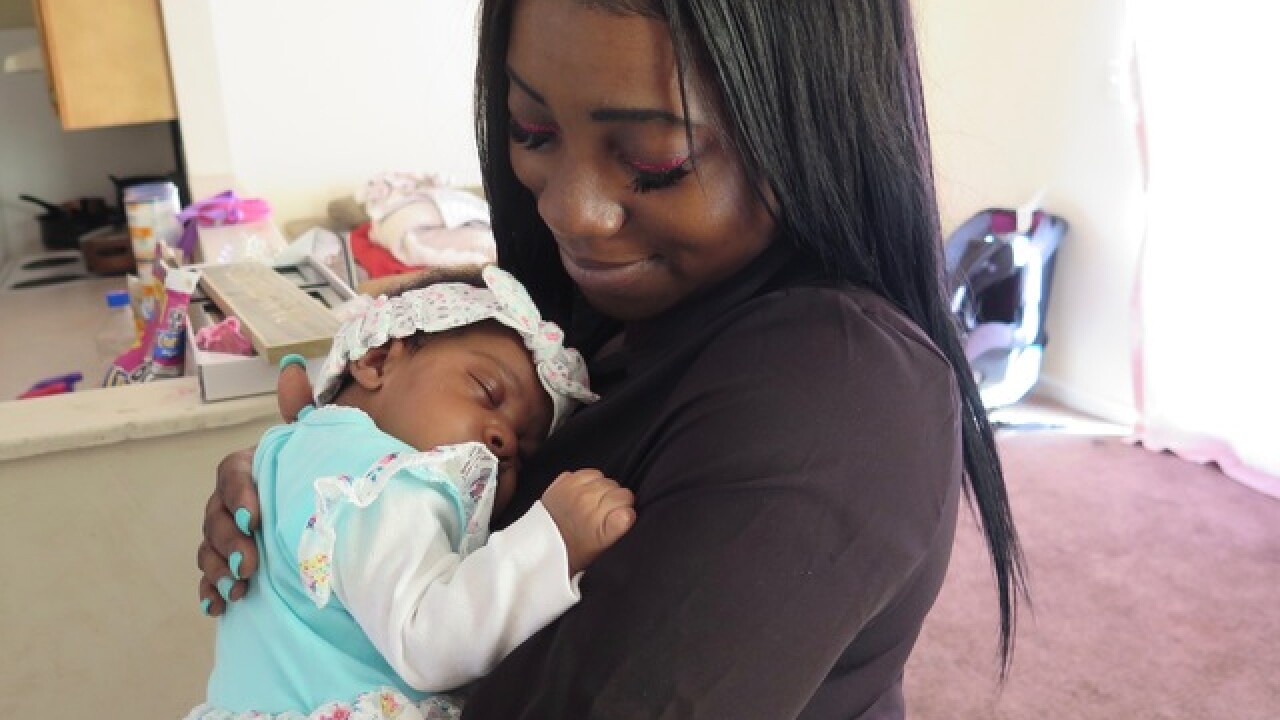 CINCINNATI -- Cessalea Moore was stressed out and physically ill during much of her pregnancy last year.

“My legs would go out on me. I passed out a couple of times. I used to get dizzy, and I had the worst migraines,” she said. “I had diabetes, too.”

She also had six other children to care for -- her four older kids and two stepchildren.

Fortunately for Moore, she had support in the form of the StartStrong project, an innovative approach to health care for pregnant moms in Cincinnati’s Avondale neighborhood.

As part of StartStrong, April Griffin, a certified community health worker for TriHealth, helped Moore get the crib and stroller she needed for her baby. She even gave her a grocery store gift card for food when things got tight.

And Kourtney Black, a registered nurse case manager at Good Samaritan Hospital, counseled Moore through her medical appointments and kept in touch between doctor visits to make sure she was OK.

Moore said their support and genuine concern was critical to getting through it all.

“I was going through so much, it kind of seemed like everything was hitting me at the same time,” she said. “They really coached me through the whole pregnancy.”

StartStrong launched in 2013 with a deceptively simple goal: To help more babies born in Avondale live until their first birthdays.

Before StartStrong, Avondale had infant mortality rates that were among the worst in Hamilton County and the nation as a whole, with 21 deaths for every 1,000 live births among the neighborhood's moms. The single biggest cause of those infant deaths was “extreme preterm birth,” with babies born before growing for at least 28 weeks in their mothers’ wombs.

The health care and community service providers that came together for StartStrong wanted to improve those odds in the neighborhood that’s home to some of the region’s best hospitals and medical centers.

Using funding from the Bethesda Inc. grant-making initiative known as bi3 and Cincinnati Children’s Hospital Medical Center, along with in-kind support from TriHealth and UC Health, the providers worked with residents to transform the way the neighborhood’s pregnant moms get care.

After three years of effort, Avondale’s infant mortality rate dropped to just over eight deaths per 1,000 live births. It now ranks among the Hamilton County neighborhoods with the fewest infant deaths.

The even bigger success: Avondale went for more than three years without a single “extreme preterm” birth.

That equates to between 12 and 15 babies who survived because they were not born way too early, said Ryan Adcock, executive director of Cradle Cincinnati, the effort to reduce infant mortality in Hamilton County.

The question is whether those “real results” can be replicated in other Hamilton County neighborhoods.

About 200 babies are born in Avondale each year, Adcock said, while Hamilton County as a whole has more than 10,000 births annually.

Now that StartStrong has shown infant deaths could be reduced in one neighborhood for a relatively small number of women, the people behind the project want to see if they can scale it up. The next step would be to reach 1,000 women in local neighborhoods with high infant mortality rates before eventually taking the initiative countywide.

To understand the challenges in making that work, it’s important to understand StartStrong.

The project began with Bethesda Inc., through its grant-making initiative bi3, issuing a request for proposals in 2013. The nonprofit was looking to invest in new ideas that could make Greater Cincinnati a healthier place to live, said Jill Miller, president of Bethesda Inc.

Sounds easy enough. But the collaboration was unprecedented. The idea was for health care providers -- who also were business competitors -- to work together, share information and change their practices and procedures, all in the name of reducing infant mortality in Avondale.

“I think bi3 really saw the need for us to work across systems and so did Children’s,” said Dr. Michael Marcotte, TriHealth’s director for quality and safety in maternity services. “And that allowed us to really, seriously put down some resources to really bridge across our two tertiary maternity centers -- UC and Good Samaritan.”

But for the strategy to succeed, it needed more than doctors and nurses working together. It needed guidance from the moms of Avondale.

That’s why the doctors, nurses and other staff involved in the program began meeting regularly with Avondale residents to ask them what they needed from their health care providers and get to know them as neighbors.

StartStrong asked churches to talk with their members about the importance of prenatal care, and the project hosted community meals in the neighborhood where doctors, nurses and case managers had dinner with Avondale families.

“It’s really changed the way I relate to the community,” said Kahn, a pediatrician and child health researcher at Cincinnati Children’s and the UC Department of Pediatrics. “Then you really do worry about the parent who didn’t make it into the visit that day because now you’re connected to the community.”

“It’s uncomfortable to be in a community where you are different than other people and you don’t know people,” he said. “But when you actually begin to get to know the people that you’re working with and you then see them at the office or in the hospital, the experience is very different, both for the provider and also for the patient.”

Savings for the community

StartStrong has cost money, of course, for the extra staff and resources necessary to make it work.

The project got $3.2 million over three years from bi3 and $1 million from Cincinnati Children’s, in addition to in-kind contributions from TriHealth and UC Health.

But Kahn argues the work will save far more than it has cost.

Every pregnancy and nursery visit has a cost associated with it, he said, and the cost gets higher the more prematurely a baby is born.

“A baby born extremely early can cost anywhere from $200,000 to $600,000 or $800,000 for a single stay in the Neonatal Intensive Care nursery,” he said. “Those same babies born so early, if they have continuing medical problems such as a small bleed in the brain or problems in eye development, then those costs can become lifelong costs.”

A 2017 study by Cradle Cincinnati and the University of Cincinnati Economics Center found that annual costs related to premature births in Hamilton County total $402 million.

Kahn estimates that StartStrong has reduced costs for premature Avondale babies by nearly $1.7 million since it began. And that doesn’t count the reduction in lifelong medical expenses.

“Our hope through this program is that by shifting all these births toward being full term, we’re substantially reducing the costs of caring for pregnant women and their children,” Kahn said.

If StartStrong can continue to demonstrate those savings over time, he said, its proponents are hoping to persuade government funders to pay for the program.

The way bi3 funded StartStrong is especially important because the dollars came with flexibility so the people in charge could change course if one strategy worked better than another or if an idea failed.

But at the heart of the success is the idea that the community organized around serving families instead of expecting families to navigate complex and contradictory systems at a time of stress and uncertainty, said Judith Van Ginkel, president of the home visitation program Every Child Succeeds.

For nearly 20 years, Every Child Succeeds has built relationships with low-income, first-time moms starting during their pregnancies up until their children are 3 years old. For StartStrong, the program’s home visitors focused more intensely on visits during pregnancy and the baby’s first year and also worked with moms with multiple children.

“One of the strengths we brought was our ability to be able to help the others learn more about how you actually work with families,” Van Ginkel said. “We have only taken tiny baby steps, and there’s a lot more to do. But the good news is we’re walking.”

For moms like Cessalea Moore, those baby steps have made all the difference.

Moore said she isn’t sure how she would have made it through her pregnancy without April Griffin, Kourtney Black and StartStrong.

Even with all that support, Moore gave birth to her baby girl about a month before her due date. But little Cessamier is growing up fast and, at nearly 3 months old, already seems eager to be close to her big sister, Beautiful, who is 2, and her 3-year-old sister, Uhyria.

StartStrong continues to send a nurse to Moore’s home to check on the baby each month and will be there throughout Cessamier’s first year of life.

Griffin, the certified community health worker, beamed with pride during a recent visit to Moore’s home. The work of StartStrong is especially important to Griffin, she said, because she grew up in Avondale.

“When I was told how high the infant mortality rate was in Avondale, I had to be part of the program,” she said. “We’re fighting infant mortality. We’re winning, but we’ve still got a long way to go. We have a lot of moms that need help.”

For her part, Moore said she hopes the project expands so that more moms can get the support they need to be the best parents they can be.

“To me, it means providing a healthy foundation for pregnant moms,” Moore said of the program.

More information about bi3 and StartStrong is available online. For a detailed report about the StartStrong project and its results, click here.