COLUMN: Why are we talking about a new soccer stadium and not a new viaduct? 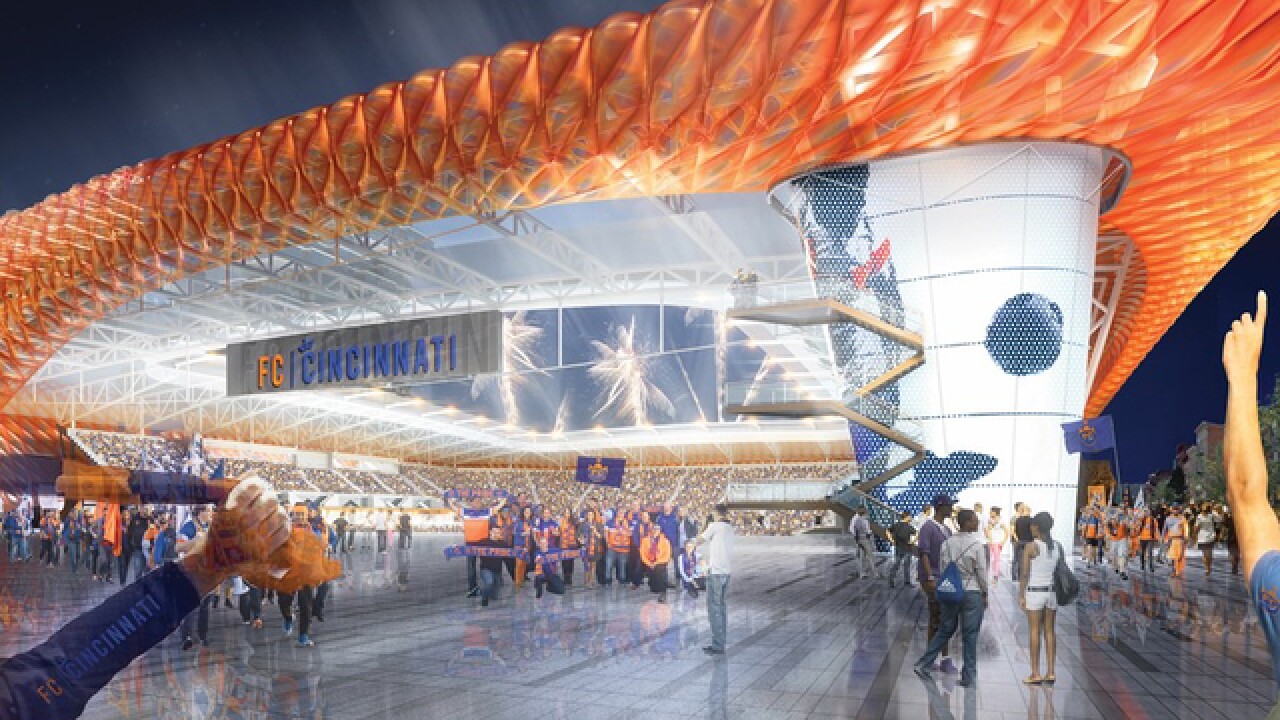 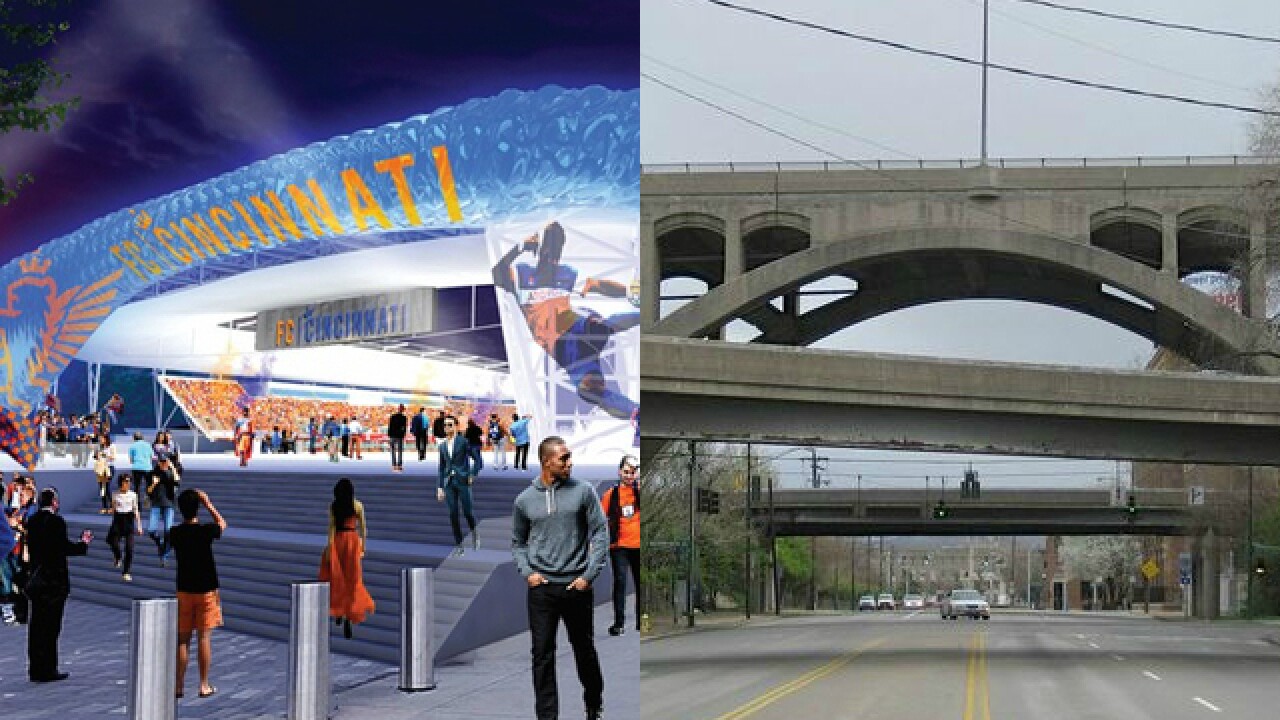 Last week, political and business leaders scrambled back and forth, racing to find a way to finance a new soccer-only stadium for FC Cincinnati.

The whole discussion has left me wondering: Who's racing to get us a new Western Hills Viaduct? Or buses that haven't run past their lifespan?

Yes, the club generously offered to finance the $200 million stadium on their own. It's a move that's pretty much unheard of, and can't be said for building Paul Brown Stadium or Great American Ball Park, both of which a county-wide sales tax funds.

Hamilton County has said they will commit $12-15 million for a new parking garage. Cincinnati Mayor John Cranley has proposed financing $37 million in new infrastructure surrounding the would-be stadium. Over the plan's 30-year lifespan, that would end up costing roughly $60 million after interest.

Not all the pieces are in place yet. Nor was it as smooth as some negotiations like this go. But it sure came together quickly.

The urgency surrounding the push to put FC Cincinnati in the majors is refreshing -- in line with the renaissance much of the city is seeing right now.

It would be nice to see the same urgency aimed at these other, much longer-existing infrastructure problems.

Rewind less than a month ago, while on the campaign trail, both mayoral candidates -- incumbent John Cranley and challenger Yvette Simpson -- identified the viaduct and bus service as the city's top two transportation and infrastructure priorities.

During a WCPO-hosted mayoral debate in October , WCPO politics reporter Paula Christian asked the candidates how the city could help finance some looming infrastructure projects, such as expanding the Duke Energy Convention Center, replacing U.S. Bank Arena or -- yep -- a stadium for FC Cincinnati.

Almost immediately, the candidates shifted the conversation away from these event centers and to the viaduct.

"(The Western Hills Viaduct) is a critical link to the West Side, and will continue to be a huge priority. So as we lobby the federal, the state, or think about any additional resources locally, I think we have to prioritize those major projects that help the most number of people," Cranley replied -- notably skirting comment on a new stadium for FC Cincinnati.

"One of the great challenges ahead of us is to build a true public transit system," Cranley said.

"We need more public transportation." His delivery here was slow and deliberate. "All the studies show that we are deeply under-invested to get to and from your job."

Simpson also made this a key campaign issue, frequently relating a bus trip she took from Walnut Hills to Mount Airy: "Who would take four hours, round trip, to get from home to work?" she said. "It's not working, and this administration has done nothing to change that problem."

In fairness, much of the public money in question is coming from a hotel tax, proceeds from which go to both the city and the county. Money collected from that tax is supposed to go toward tourism-related investments.

But I wonder if a new Western Hills Viaduct couldn't have been attached to a new stadium deal had FC Cincinnati targeted West End -- as was rumored early on -- as a possible site for a stadium. The viaduct provides direct access into West End, CUF and Over-the-Rhine from the city's West Side.

Ultimately, where the money comes from is less troublesome than where our leaders' focus has shifted.

I keep coming back to the mayor's phrasing during the debate: "We have to prioritize those major projects that help the most number of people."

"The most number of people."

How many people would a new stadium benefit?

It would host roughly 21,000 people. It could boost development in and around Oakley Station -- although it's pretty densely developed already.

But it's beyond me how they could widen Madison Road to five lanes, as the proposal suggests.

And a boost in economic activity around a stadium is no guarantee: Development around Paul Brown Stadium -- the other stadium championed by former Bengals executive, now FC Cincinnati President Jeff Berding -- proved to be sluggish since it opened in 2000.

It's also ended up costing taxpayers far more than originally anticipated to maintain and operate, as WCPO has previously reported . The county recently had to commit more funds each year to keep the stadium in operation.

And about the road widening: For a neighborhood that touts Oakley Station as a boon for its walkability, widening roads seems like a reversal of those efforts. Adding lanes to streets and roads almost never results in a more walkable neighborhood, and would most likely cause even more traffic congestion in the area than what already exists.

I get that Major League Soccer's deadline for expansion-city proposals is right around the corner. But if we want to talk about last-minute deadlines, we're getting uncomfortably close to another deadline: when the Western Hills Viaduct finally becomes structurally unsound and we don't have a plan to pay for a new one. Or, when the next Metro budget cycle comes around, and they have to slash service routes.

My suggestion for the Lindner family -- Carl Lindner, III is a co-owner of the club -- and others who are putting up money for a new stadium: Build us a new viaduct instead. Buy us new buses.

Do something that helps the people living on the West Side and other peripheral neighborhoods get into the center city and enjoy FC Cincinnati matches, regardless if they're MLS-status or not, as well as all the other developments currently in progress.

The Lindners and their peers have done so much for this city and the region. They should continue that tradition and give the city another improvement that isn't just something we want, but something we really need.