Could you live car-free? Here's 9 things to know 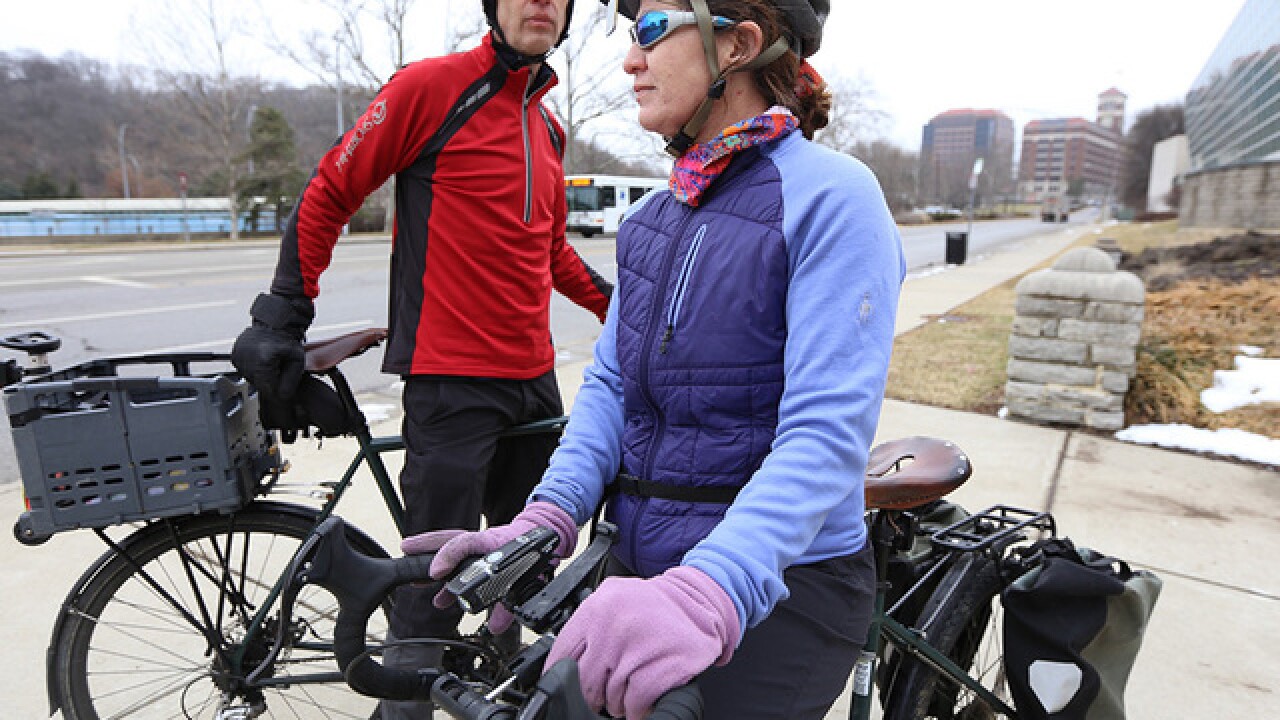 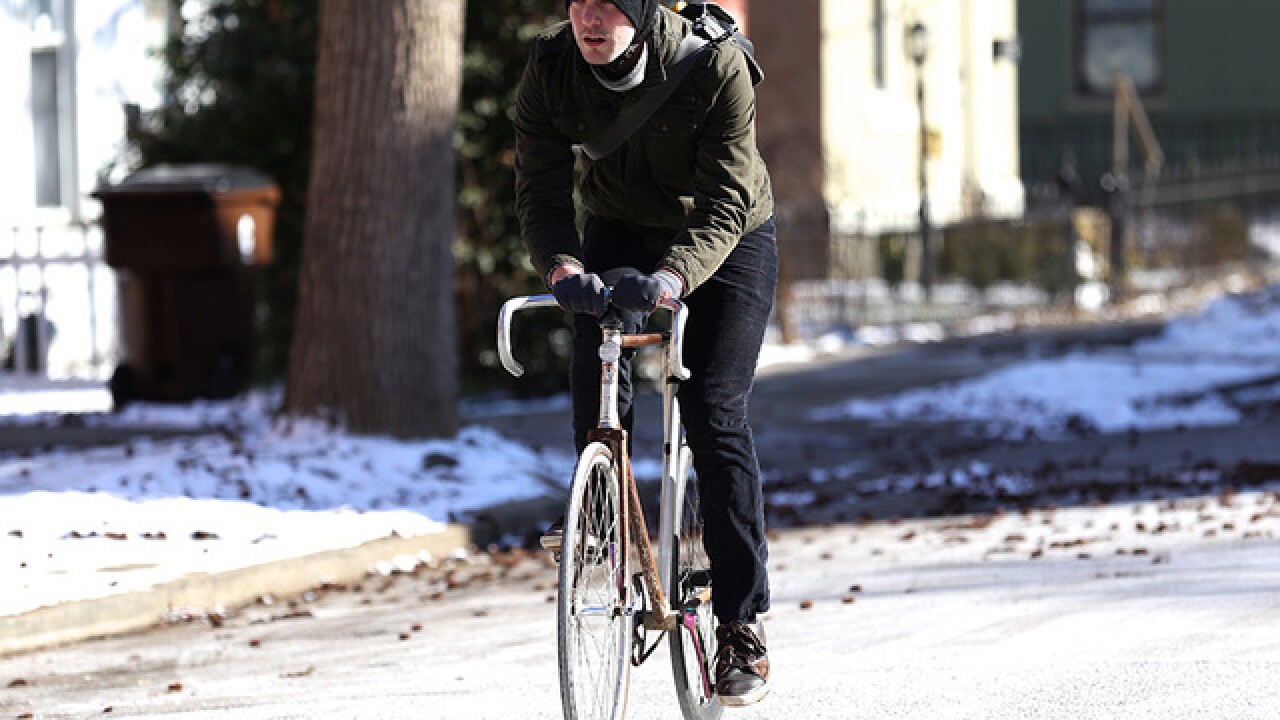 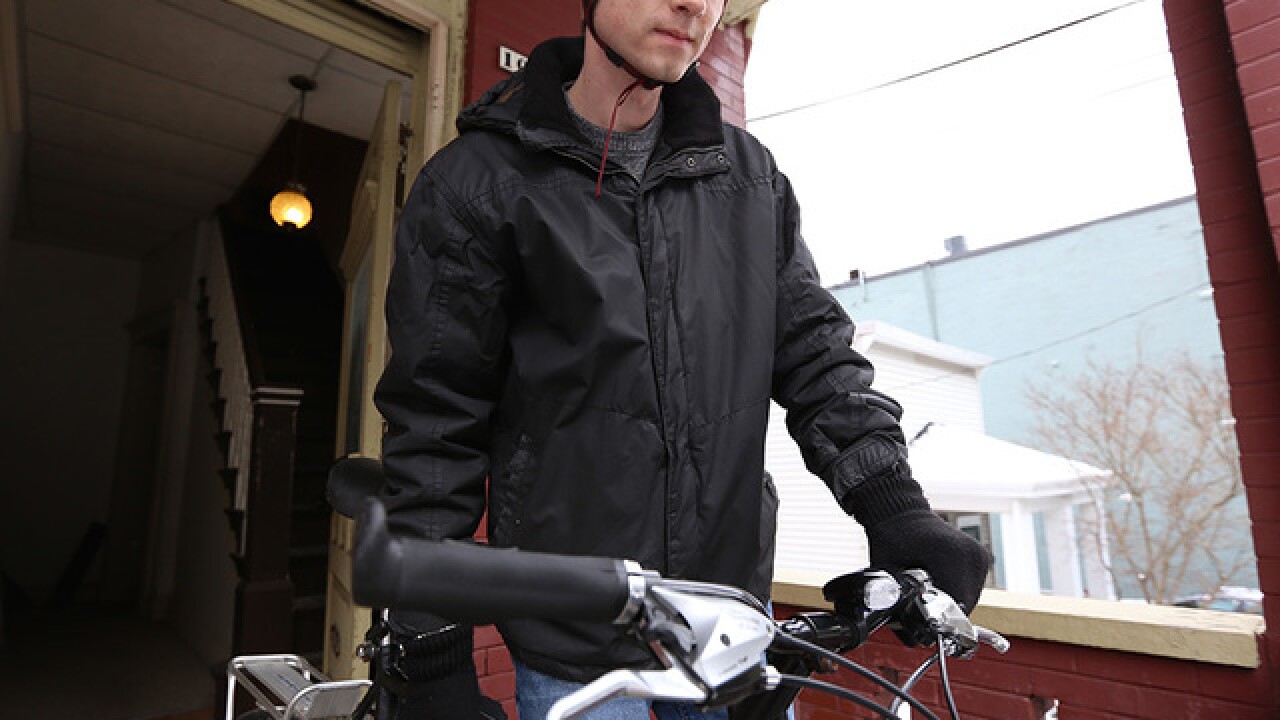 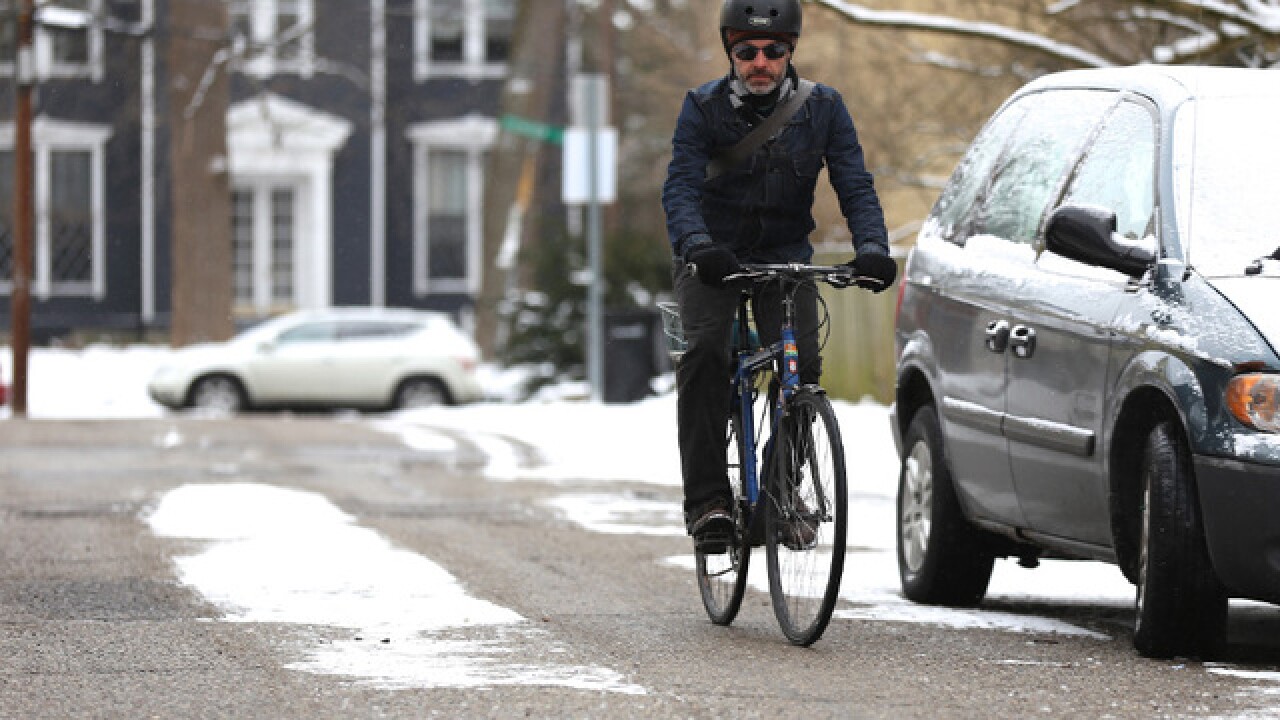 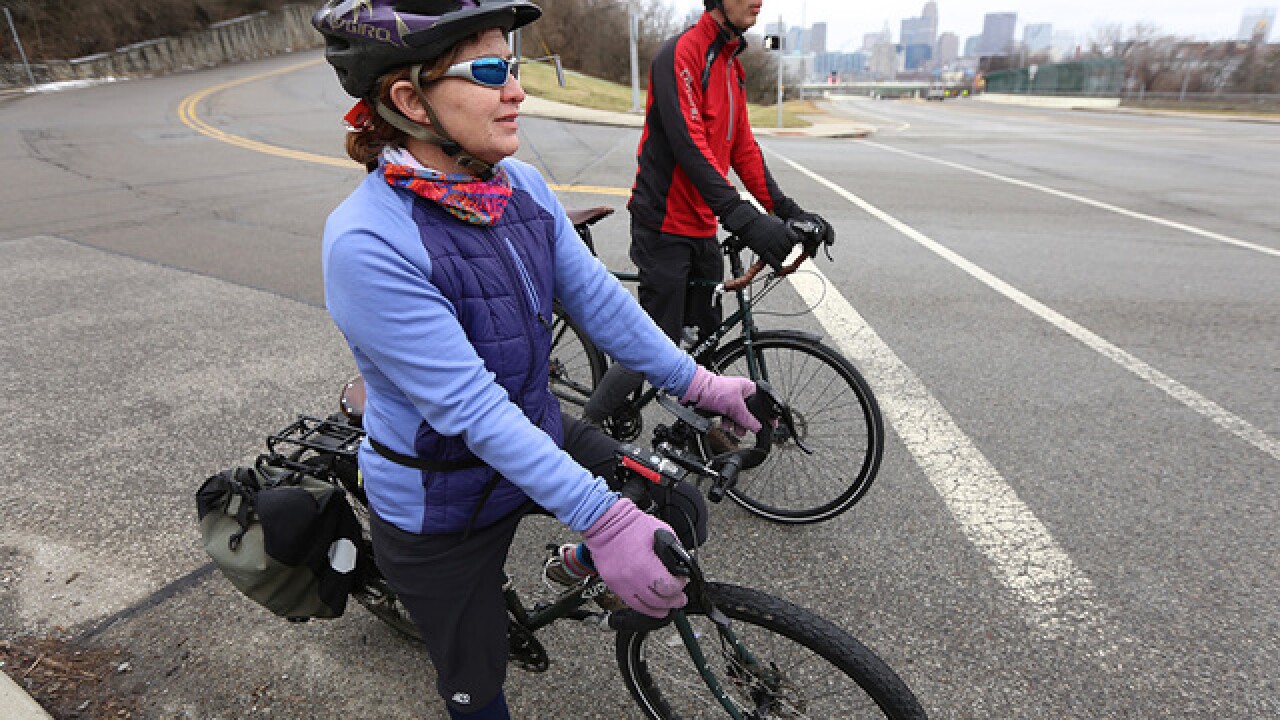 Pat LaFleur is a web editor for WCPO and has lived car-free in Northern Kentucky for three years. Emily Maxwell is a photojournalist for WCPO.

That's the share of Greater Cincinnati commuters who traveled exclusively by car in 2014, according to the most recent community data from the United States Census Bureau. That’s a bit more than 900,000 people driving to and from work more or less every day.

And then there were the other 9 percent of us who didn’t.

Believe it or not, we exist. The 9 percent. We’re a small minority, and you have to look hard for us, but we’re here, on our bicycles, riding the bus, using car-share — even (brace yourself) walking to work.

For a sense of just how uncommon this is in the Tri-State, there were more people who worked from home in Greater Cincinnati in 2014 than who had a commute and traveled without a car, according to Census estimates.

Honestly, Cincinnati's love affair with its automobiles is a bit scary if you ask me, given that Cincinnati drivers recently ranked among the worst in the U.S., achieving about the same esteem as the city's traffic congestion.

My tone might seem over-the-top here but there’s a kernel of truth behind it: Telling Cincinnati folks you don’t own a car is like telling them you don’t like Skyline or Graeter’s. It raises more than its fair share of eyebrows, mostly because — so the prevailing narrative goes — it’s just easier to get around Cincinnati if you’re behind the wheel.

And there’s some truth to that, too — but I’ll get to that later.

For now, the fact remains: Living car-free is a mystery (or, for some, a nightmare) to a large majority of the Tri-State, to the extent that even the most gracious refusal to accept a ride leaves many Cincinnatians scratching their heads and insisting that you actually do want the ride... you just don't know it.

Just ask Andy Shenk, of Mt. Adams, who has never owned a car while living in Cincinnati.

“The one thing that really jumped out to [my wife and me] at first was that people felt really uncomfortable when we would tell them we don’t have a car," he said. "People would offer all the time to give us a ride home — like, ‘Oh you don’t need to [take the bus]; we’ll just drive you home.'”

If you don't own a car in this town, I'm certain you've been in this situation.

Whether you’re curious about kicking the keys — even if just for a week, to see what it’s like — or you’re interested in pulling back the curtain on something you’ve never really understood or even considered, here are nine things Cincinnati's motorists should know about living car-free in Cincinnati:

1) It’s Not Always a Choice

This point is huge.

While data quantifying this claim, to my knowledge, doesn’t exist, the region's diverse socioeconomic profile suggests that, for a significant portion of that 9 percent, owning a car just isn't an option.

By the same token, many in the 91 percent majority might have no choice but to own a car due to limited convenient transit alternatives.

Admittedly, the rest of this list focuses on those who have the option and choose to live car-free.

Those who do not have a choice in the matter are an equally critical part of this region’s narrative, and make up another set of stories altogether.

Not all of us anyway.

Meet Larry and Nita Wessel, who live in Mariemont and bike “almost exclusively” (if it’s extra snowy, they’ll take the bus). After what they described as a lifetime of bicycling, Nita finally sold her car in 2009, and Larry just a year or two later.

They haven't looked back.

Larry, 53, works Downtown and bicycles into work every day from their home in the east side suburb. He said the commute takes him about an hour or more each way.

Nita, 55 and now retired, still makes the ride with him, and, when needed, will stop at the Walnut Hills Kroger on her way home, fill up her pannier bags (think saddle bags, but for a bicycle) with groceries and pedal home.

Sometimes, she said, she’ll meet him halfway on his evening commute.

To zoom, use the +/- buttons at the bottom left of the map.

The same idea goes for bus riders: Data collected in 2013 by the Southwest Ohio Regional Transit Authority found a 44 percent majority of Metro users are between the ages of 41 and 64, while 25-year-olds or younger make up less than a quarter of all riders.

3) Not Just When the Weather’s Nice

Because — let’s face it — counting on that perfect, fall-like day around here is about as safe a bet as on [insert any Cincinnati pro or college team here].

But people brave it anyway, even in winter, people like Larry and Nita. “It’s good down until about 5 degrees. That’s the point where we start questioning our sanity,” Nita said. “But it’s really wonderful. I love it.”

WCPO spoke with other local car-free commuters back during February’s bitter, arctic turn. The cold wasn’t stopping them: WATCH THE VIDEO BELOW.

4) It’s True, Cincy Transit Has a Long Way to Go

I mentioned before a prevailing narrative about Cincinnati — that it’s just too much of a hassle to go car-free.

There is an argument to be made here. For starters, as WCPO has reported previously, a recent University of Cincinnati study found that the Cincinnati Metro bus system — the region’s primary transit option — is not equipped to serve roughly 75,000 health care and manufacturing workers throughout the region.

That same report also found Metro could do more to serve the region’s suburbs — especially when it comes to connecting crosstown, from suburb to suburb.

If you live outside of Hamilton, Campbell, Kenton or Boone counties, the picture could look even more grim.

Then there’s the streetcar. The contentious project has seen a relatively even mixture of successes and setbacks along the way, and — as testing of the city’s first five streetcar vehicles is well underway — uncertainty still surrounds expansion plans for connecting the OTR-Downtown-The Banks starter loop to Uptown and the University of Cincinnati, as was originally proposed.

And as far as walkability goes, Walkscore — a website that assesses neighborhoods' offerings in terms of jobs and other amenities that are reachable door-to-door on foot — gives Cincinnati as a whole a mediocre score of 50. Some of the city's more walkable neighborhoods score more favorably.

Since the decommissioning of Cincinnati's once robust streetcar network in the early 1950s, the city has been building (albeit slowly) its transit offerings, recently following some newer trends seen in other cities around the country.

For instance, have you ridden a Red Bike yet? Cincinnati's new bike-share program has stations everywhere, it seems, from Covington and Newport in Northern Kentucky all the way up to Clifton and Northside. Arguably a success story in almost every way, the program expanded from 30 to more than 50 stations before celebrating its one-year anniversary. Even if you don’t go completely car-free, bike share is a useful tool for lightening your car-dependency once you’ve driven into the city and parked.

As for Metro, that same UC report also found, among peer cities with a bus-only transit system, Cincinnati ranks highest for efficiency and reliability.

In fact, Metro is what convinced Shenk's wife Nikki that he wasn’t crazy when he proposed ditching their cars for good.

She told WCPO she was afraid that going car-free would “completely change (her) life" — that is, until, she discovered Metro Rt. 1.

“Our life didn’t really change,” she said: Her commute involves walking a few hundred feet to the nearby bus stop and taking the 1 into Downtown.

Andy works from home but runs errands and explores the city primarily by bicycle, when not riding the bus with Nikki.

6) ‘Multimodal’ Is a Must with Cincy Transit

A big buzzword among transit nerds is “multimodal” — or, employing multiple modes of transportation in a single trip or outing.

A multimodal commute could include one's car. Both Cincinnati Metro and the Transit Authority of Northern Kentucky offer park and ride service.

But, given the still emerging nature of the systems already or about to be in place, there are a number of instances in which using multiple modes would make the trip quicker — or, in some cases, possible. I shave 25 minutes off my commute by bicycling the first half, then hopping on a bus for the rest.

I mean, it’s possible to find your way through Cincinnati’s transit grid without using a mobile app. But why would you want to?

Location-based schedules for both Cincinnati Metro and TANK can be accessed using either Google Transit or locally-developed Bus Detective. In Bus Detective’s case, the app delivers real-time location data for Cincinnati Metro buses, showing users whether their bus is on-time or running late.

Even the Google Maps (in addition to Google Transit) app can tell you when and where to catch the nearest bus.

8) Your Commute Will Take Longer

This might be the hardest pill for some to swallow, but — unlike some other cities with more robust transit options — unless you’re only traveling a mile or two, ditching the keys in Greater Cincinnati will probably cost you time.

Take a look at the difference Google Maps estimates between taking the bus from Oakley Square to Fountain Square, versus hopping in your car: Fourteen minutes by car versus 46 minutes by bus. This rate of difference would vary by time of day and specific destinations, of course. But still, it's real:

To that last point — about commutes being longer — everyone we spoke with about living car-free in Cincinnati said the biggest impact the lifestyle has had is that it forces them to slow down.

Danny Korman — East Walnut Hills resident, owner of Park+Vine in Over-the-Rhine, and co-author of walking-tour guidebook "Walking Cincinnati" — estimated he’s only owned a car for 6 of his 40 or so years. He alternates between walking and riding his bike into work every day.

For Korman, the commute lets him reflect and spend time with himself.

“I get a lot more alone time before I start my day and am in front of a bunch of people,” he told WCPO. Korman said he alternates his walking routes, but it often includes a stretch through scenic Eden Park.

For Larry Wessel, it puts more intentionality into his life, he said.

“When you’re in a car things just seem to go faster and more hectic,” he said. “When you ride, it’s more enjoyable and you’re not in a big rush. Sometimes a car can just be a hassle.”

Andy Shenk felt the same way, adding that commuting by bicycle and bus has made him feel more connected and appreciative of the city itself.

“I’ve seen a lot of cool buildings, a lot of cool parks,” he said. “Just having the time to explore things I wouldn’t get to see if I was in a car.

“I love this city, and I really love learning about it.”