Is it illegal not to shovel your sidewalk in Cincinnati?

A simple question with a slippery answer 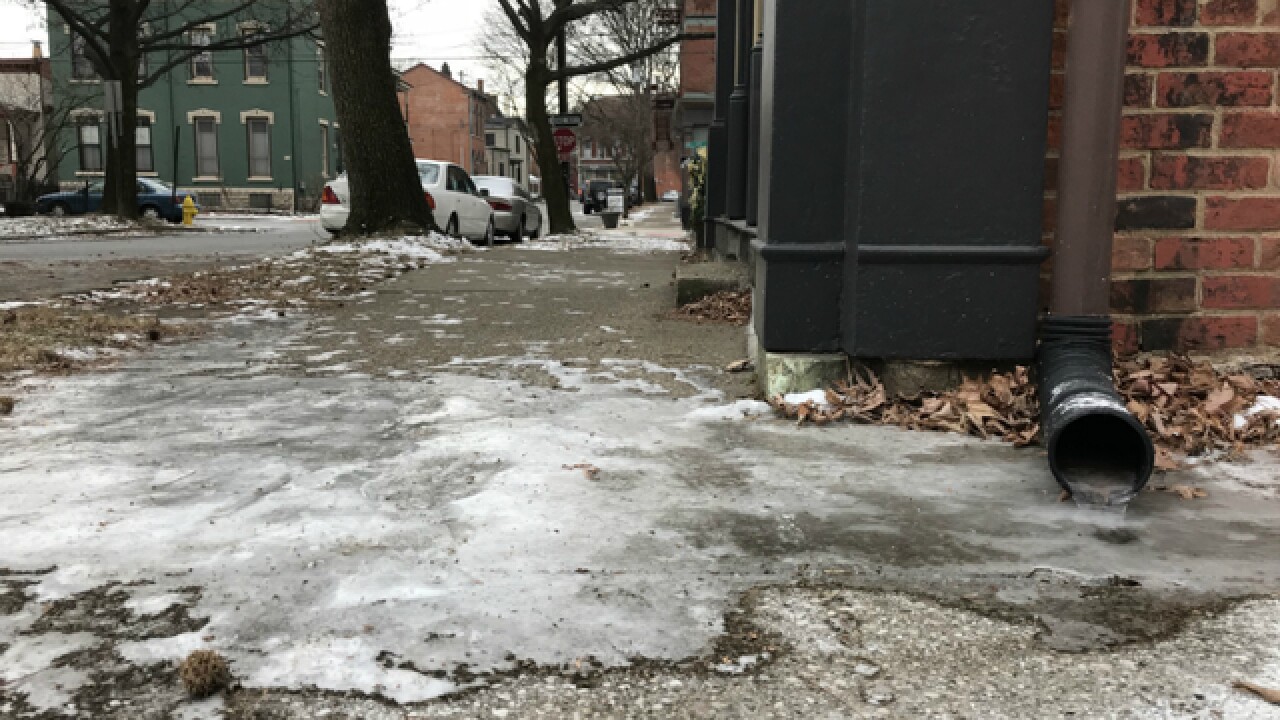 Copyright 2018 Scripps Media, Inc. All rights reserved. This material may not be published, broadcast, rewritten, or redistributed.
<p>A patch of sidewalk in Covington is covered with ice after water drained from a resident's downspout and froze, photographed Jan. 3, 2017. (Pat LaFleur/WCPO)</p>

The region's first major snow event of the season arrived early Saturday morning, and crews across the Tri-State seemed ready. Major roads were treated and cleared quickly, and there were few weather-related traffic incidents throughout the morning and into the afternoon.

Sidewalks, though were a different story. It's a recurring issue for people as they walk through their neighborhoods after accumulating snowfall or an ice storm: A stretch of sidewalk will be free of snow and ice, while other stretches... not so much.

With a few heroic exceptions, a walk along the city sidewalks after snowfall usually requires careful attention, skilled maneuvering and heavy snow boots. Some just abandon all hope and walk in the street, where the plows usually have already cleared the snow.

For others, the street becomes the only options. Heather Sturgill, of Northside, lives with a physical disability and uses a motorized wheelchair to get around. She said every snow event means she's forced to take her chair into the street to move through her neighborhood.

"Even if most of the sidewalks are cleared, I’m likely still in the street because there’s the possibility of getting stuck and nobody seeing me to be able to help," said Sturgill, who also heads up the mayorally-appointed Cincinnati Accessibility Board of Advisors. The board's job is to review city procedures and policies and make recommendations for how they can better accommodate people living with disabilities or other physical or cognitive limitations.

"Imagine actually being in the street in inclement weather where the vehicle is likely to slide. It’s just dangerous. It puts our jobs at risk. It puts our health at risk."

In Cincinnati, uncleared sidewalks are technically evidence of a crime: Property owners are required by law to clear snow and ice from their sidewalks and any abutting sidewalks.

Because enforcement of such a law poses logistical problems for the city, Sturgill said it usually comes down to neighbors being neighborly.

"My one neighbor down the street saw me, in the street, hadn’t shoveled his sidewalk and, on the way back, it was shoveled," she told WCPO. "I think once people realize that it is their neighbor two doors down, three doors down that is negatively impacted and they see it, then they do it."

While the Ohio Supreme Court ruled in 1993 that homeowners have no legal obligation to clear sidewalks of the "natural accumulation of snow and ice," the Ohio Insurance Institute says homeowners do have that obligation if there is a local statute requiring it.

Cities across the Tri-State vary in their implementation of sidewalk clearing laws. Here's a small sampling:

Then-City Manager Milton Dohoney explained in a 2011 memo that, while the ordinance is intended to ease the “impossible” burden of clearing snow and ice from all of a city’s sidewalks, the law also does not impose any liability on owners and tenants for injury incurred by a pedestrian traversing their sidewalk.

Covington -- Remove Snow, or city will (at a cost)

In Covington, property owners are required to remove snow and ice from abutting sidewalks within 12 hours of daylight after snow or ice falls.

The penalty for not doing so is that the city (theoretically) may intervene at the cost of a lien on the property equal to the cost of snow removal.
So, if you live in one of those three cities, now you know what's expected of property owners when snow falls. If not, all it takes to find out is a quick phone call to your city's administrative offices.

Assistant Township Administrator Steve Sievers told WCPO by email, "As we have worked diligently to expand our sidewalk network by more than 15 miles over the past 20 years, the requirement or liability in clearing snow and ice from the sidewalk was often a major concern of property owners from whom we were seeking easement donations for construction.

"While it is not an obligation to clear the snow, it is obvious that walkers, school children, and other that use the sidewalks, may still appreciate a cleared sidewalks as opposed to trudging through snow and ice."