COLUMN: Here's what BLINK taught us about getting around Downtown, OTR 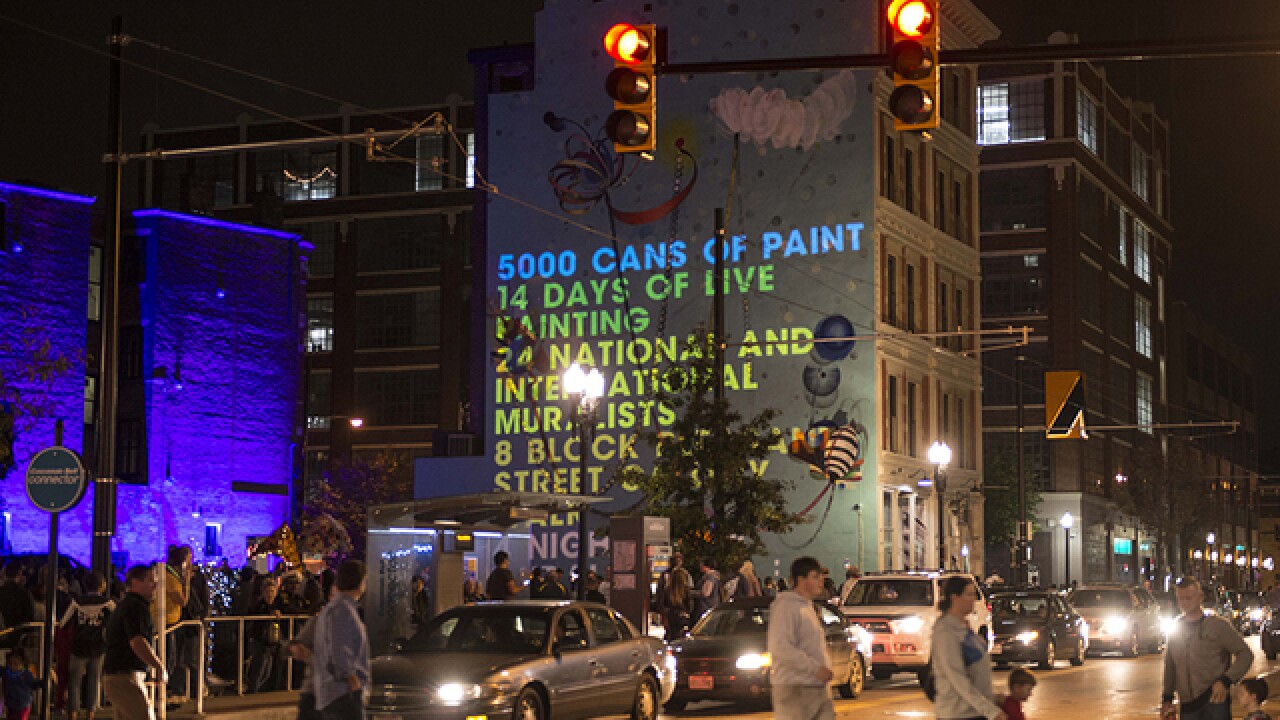 Copyright 2017 Scripps Media, Inc. All rights reserved. This material may not be published, broadcast, rewritten, or redistributed.
People celebrated the BLINK Cincinnati art and light festival on Oct. 13, 2017, with music, circus fun, food and drinks in Downtown's Gano Alley. Vine St. in OTR.

CINCINNATI -- When Cameron Hardy came down from his Mount Airy home to witness BLINK -- the light, art and music show that took over The Banks, Downtown and Over-the-Rhine last weekend -- he expected the crowd to be as much a spectacle as the visual displays themselves.

But they weren't the only sight to behold.

Hardy found another kind of visual spectacle pouring into the urban core streets this weekend: the blinking of thousands of brake lights, one seemingly on top of another, as traffic congestion swelled to all-time highs.

It slowed Hardy's commute down significantly.

"It took me 37 minutes to get from right here at Fifth and Main to Main and Liberty," Hardy said. The trip normally takes 10 minutes or less.

Hardy's experience was not unique. All modes of transportation -- cars, buses, the streetcar, even pedestrian traffic, with sidewalks at times literally overflowing with people -- seemed to come to a crawl at peak times during the festival that ran from Thursday, Oct. 12 to Sunday, Oct. 15.

The congestion that resulted from BLINK's 1 million attendees provided some stark reminders of how far Cincinnati's core infrastructure has yet to adapt to the neighborhoods' growing popularity, both as a destination and a home.

Here are a few lessons we could learn from BLINK:

A lane of their own

In what's maybe one of the quickest one-punch jokes to come out of the 1992 baseball comedy "A League of Their Own," All American League recruiter Ernie Capadino -- played by Jon Lovitz -- points out his recruits' countryside naiveté as they hesitantly approach the train platform.

"See, girls, it works like this: The train moves, not the station," he quips.

The same was less true of Cincinnati's four streetcar vehicles -- and Metro buses for that matter -- during BLINK, as dense traffic often struggled to inch through Downtown and OTR.

Some argue these streets should have transit-dedicated travel lanes, if not permanently, at least temporarily during large events like BLINK.

Hardy saw the traffic congestion as the festival's only shortcoming.

"I'd rather stay away from Downtown. It's just too clogged up," he told WCPO.

It's part of why he decided just to walk the 20-block festival -- which followed the streetcar route.

Officials with the Southwest Ohio Regional Transit Authority -- which owns and operates Cincinnati Metro and oversees streetcar operations -- acknowledge this poses a consistent challenge for the two transit systems, and not just during big events like BLINK.

"Unfortunately, the streetcar operates in mixed traffic, so we are at the result of, whenever there are blockages and cars blocking the track, we work with the police as best we can," SORTA spokeswoman Brandy Jones said.

The thick traffic during BLINK put the spotlight on what dedicated travel lanes could do for transit, not just Downtown, but across the region.

The benefits of dedicated transit lanes have been well-documented by local transportation departments across the country. Bus rapid transit systems -- which rely, in part, on dedicated right-of-ways for the buses -- boast "more reliable, convenient and faster (service) than regular bus services," according to the New York-based Institute for Transportation and Development Policy .

In 2010, then-Vice Mayor Roxanne Qualls proposed a BRT system for the Tri-State as part of a larger vision to connect the suburbs with the city's job centers.

People see it, and they want to ride it

Traffic lanes weren't the only things overflowing during BLINK.

The streetcars themselves were packed with riders for much of the festival. They were so crowded that many would-be riders had to wait in long lines only to find they had to wait even longer because there was no room.

The crowded streetcars added to Hardy's decision just to walk.

"Everything that I'd seen that was streetcar was too packed," he said.

This was sort of inevitable. After all, the festival was plotted out along the streetcar route, which meant many would board the streetcar and ride the entire loop without disembarking.

Beyond the festival's layout encouraging ridership, though, the 27,000 rides -- and the additional would-be rides inhibited by maxed-out capacity -- demonstrate that once people are Downtown and in OTR, by and large they're curious to try out the streetcar.

"We saw a lot of first-time riders coming out and exploring the city," Jones said.

Data collected throughout the streetcar's first year of operations supports the idea that the streetcar has the highest ridership when visitors have a reason to come Downtown, with weekend ridership outperforming weekdays.

This means that, while the streetcar is limited to its current 3.6-mile loop configuration in the city's deep urban core, high ridership will rely on the communities' ability to draw people.

By the same (streetcar) token...

As much as the streetcar has shown to rely on events like BLINK in order to generate big ridership numbers, big events also rely on reliable and efficient performance across all modes of transit. Otherwise, Downtown will develop a reputation as crowded and hard to get around during the city's special events, Hardy said.

The traffic signal patterns are currently the subject of a study within the city's Department of Transportation and Engineering. It wasn't long after the streetcar's launch that City Council recognized the need to re-evaluate Downtown's and OTR's traffic signal timings, now that the streetcar has integrated into auto and Cincinnati Metro bus traffic.

It's the first time the city has re-evaluated its signal timings in more than 20 years , and that's far overdue. These studies usually take place once every five to 10 years.