'You can see it in their eyes. There is no hope.' 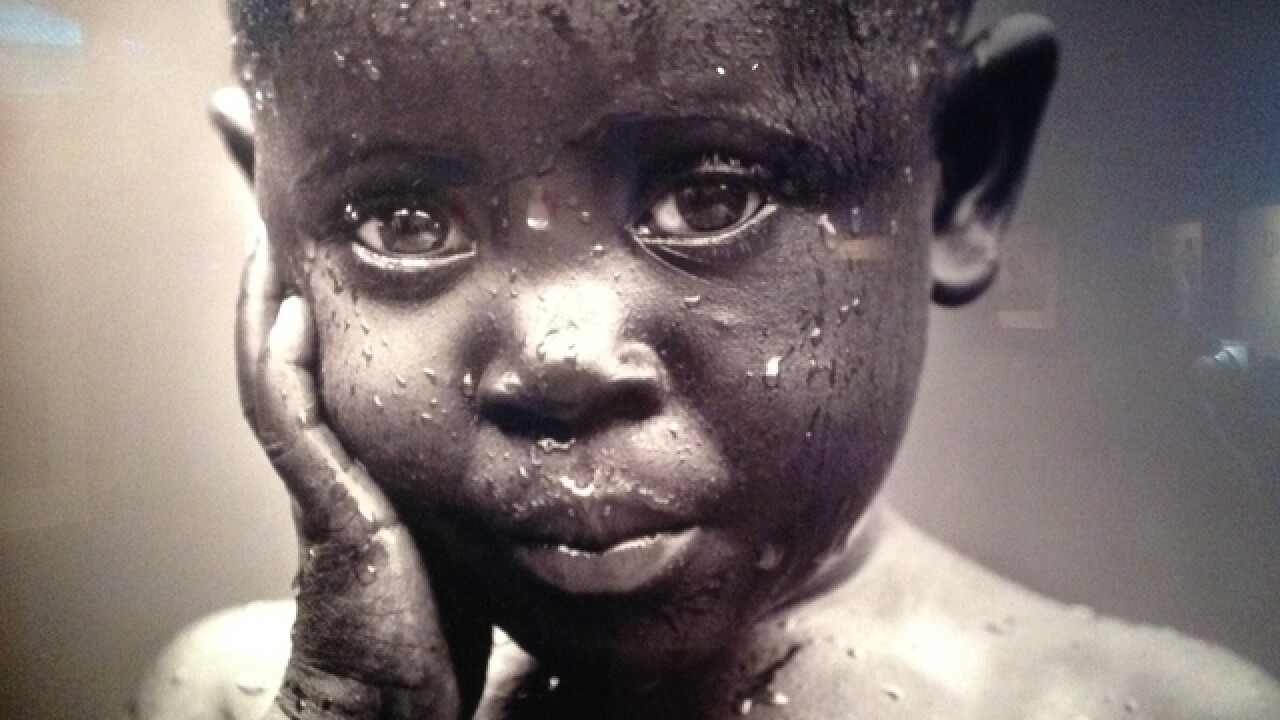 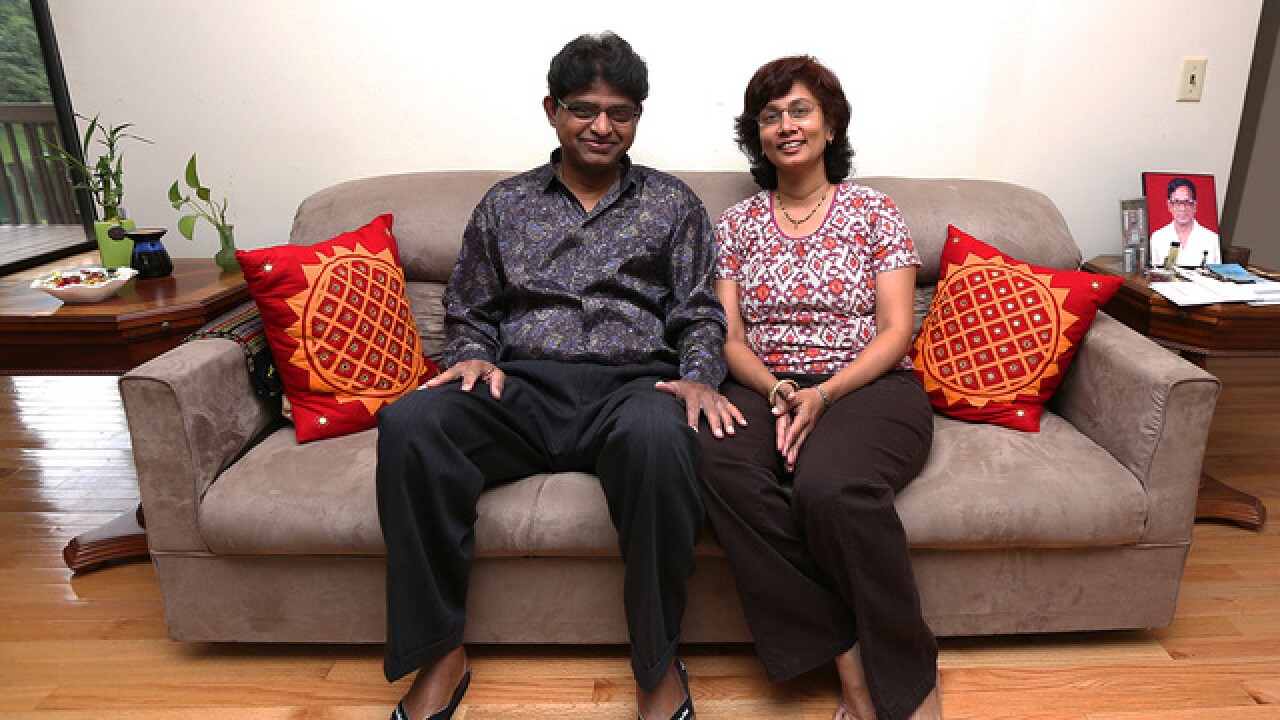 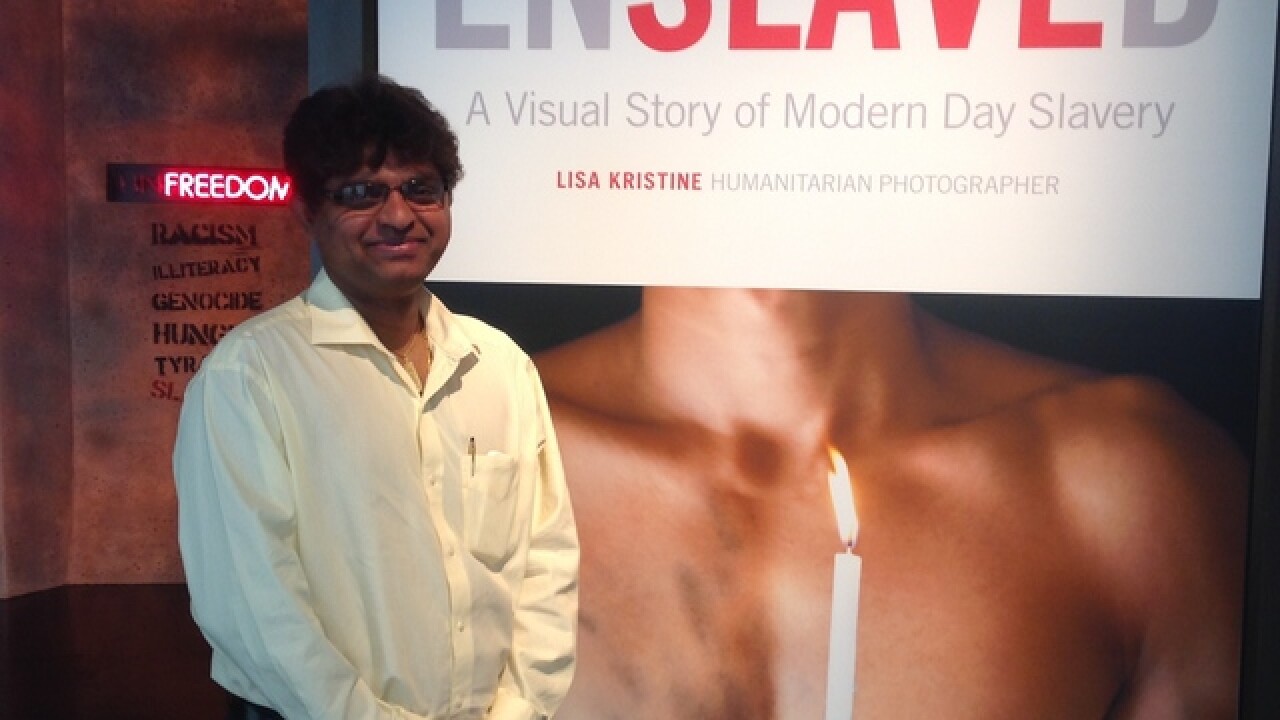 CINCINNATI — Harold D'Souza pauses in front of a black and white portrait of a little boy named Kofi.

The boy's big eyes stare straight ahead as water drips down his face and his bare hand cups one chubby cheek.

D'Souza stops because the boy reminds him of his own son, the younger of his two boys. The difference is that Kofi was a slave in Ghana. D'Souza's son experienced modern-day slavery as a young boy here, in Blue Ash.

As difficult as it might be to believe or accept, the abhorrent practice of slavery is alive and thriving — with an estimated 20.9 million people enslaved around the world.

For the past decade, the National Underground Railroad Freedom Center has been involved with the issue of human trafficking and modern-day slavery to help visitors understand that slavery didn't end with the Civil War and the ratification of the Thirteenth Amendment in 1865.

A new special exhibit at the Freedom Center called "ENSLAVED: A Visual Story of Modern Day Slavery" features images from Lisa Kristine, a humanitarian photographer. One of those images is the picture of Kofi — the one that stopped D'Souza in his tracks the first time he saw it.

"I don't want any child to suffer," D'Souza says.

D'Souza and his family understand modern-day slavery better than most.

He and his wife, Dancy, moved to the United States from India in 2003 with the promise of a $75,000 annual salary and a better life for themselves and their young sons.

RELATED: Slavery in Blue Ash: 'My dream was like a hell'

Instead, they spent 19 months working 15-hour days, seven days a week without pay at an Indian restaurant in Blue Ash that has since been closed. They lived in an unfurnished, one-bedroom apartment near the restaurant. Their sons often went hungry and had to sleep on the floor.

I first met the D'Souzas in 2014 and wrote about how they escaped their awful circumstances all those years ago.

So when Assia Johnson of the Freedom Center asked me if I wanted to come tour the new "ENSLAVED" exhibit, I said yes — if I could tour it with Harold D'Souza.

'No Child Should Be Hungry'

D'Souza is a humble man. He still lives in Blue Ash with his wife, and he has a job he loves at Cincinnati Children's Hospital Medical Center.

His sons have few memories of the 19 months of hell that they and their parents endured. The boys have grown to become young men. Bradly, the older son, is a student at the University of Cincinnati and expects to graduate this year — six months early. He balances a job, his studies and volunteer activities that have brought him national acclaim. The younger son, Rohan, just graduated from high school, is a skilled tennis player and will be attending the University of Cincinnati in the fall.

But Harold D'Souza remembers all too clearly the nights that he and Dancy would finish work at the restaurant and slip into their apartment around 2 a.m. Rohan, who was only 4 at the time, slept curled up next to the door, waiting for his mom and dad.

D'Souza wept when he first told me that story more than two years ago. And standing in front of the photo of Kofi, his memories of 4-year-old Rohan come flooding back.

"I would see the tears in my son's eyes, and I still see it," D'Souza tells me. "No child should be hungry."

I have kept up with the D'Souzas since that story in 2014. Harold D'Souza has become an outspoken advocate for victims of human trafficking in recent year. He now serves as a member of the United States Advisory Council on Human Trafficking.

He and his wife toured the "ENSLAVED" exhibit for the first time when it opened in early May. But he was happy to tour it again with me and share his thoughts in order to raise awareness. We met at the Freedom Center Wednesday morning, before it opened, and walked through.

D'Souza talked about a sense of familiarity as he looked at Kristine's photos.

"You can see it in their eyes," D'Souza says. "There is no hope. There is no courage. They don't even have a voice."

The Power Of Women

D'Souza lost his voice, too. He remembers feeling so defeated, so powerless and so ashamed that he stopped talking. It was his wife, Dancy, who finally spoke up. Her speaking up made the difference and started the family's journey to freedom.

That's the big reason Harold stops at another picture in the exhibit.

The photograph is entitled "Pillars," and it shows a group of determined-looking women in India, the country where D'Souza and his wife were born and raised.

The description next to the photo reads:

"Women are often the pillars of freedom in their communities, and so it was in this village of quarry workers who had been enslaved as long as anyone could remember."

It goes on to describe how the women fought for freedom for their village.

D'Souza looks at the photo and sees the strength.

"In many countries, ladies are not empowered," he says. "It's very disturbing."

He tells me how he believes in equality between men and women and that women should not be silenced like they are in so many places around the world. And then he talks about his own wife.

D'Souza and I continued through the exhibit. There is video of Lisa Kristine describing her project. There are photos of people who have been enslaved in the U.S. There are facts and figures about slavery in Ohio, the United States and abroad. There even is a portion of the exhibit that quotes D'Souza about his own experience.

At the end, there are capital letters painted in white on a purple wall that ask: "WHAT WILL YOU DO?"

There's a petition to sign and, perhaps more importantly, there are business cards with the toll-free number for a human trafficking hotline: 1-888-373-7888.

D'Souza takes a card. He wants everyone to know the number. He wants to create awareness for the victims and bring about punishment for the perpetrators who enslave them. He wants people to act.

Assia Johnson, the Freedom Center's public relations and social media coordinator, has seen how the "ENSLAVED" exhibit has inspired people of all ages to want to act and has given them the tools to do it.

"We know that there are at least 20.9 million people enslaved around the globe today," she says. "It seems like such a daunting number to face when you're talking about a global issue."

But the message of the exhibit — and of the Freedom Center — is that being an abolitionist is not about the giant, sweeping, historic moments at the end of the battle for freedom, she says.

"It's the moments leading up to that fight, the moments that go unnoticed and unseen," Johnson says. "We have to stop this — no matter our age, our race. No matter our income or education level. We are all affected by this global problem."

You don't have to be a slavery survivor to get that message from "ENSLAVED." You don't even have to tour the exhibit with one.

"ENSLAVED: A Visual Story of Modern Day Slavery" runs through Aug. 31 at the National Underground Freedom Center. The exhibit is included in general admission. For more information, click here.