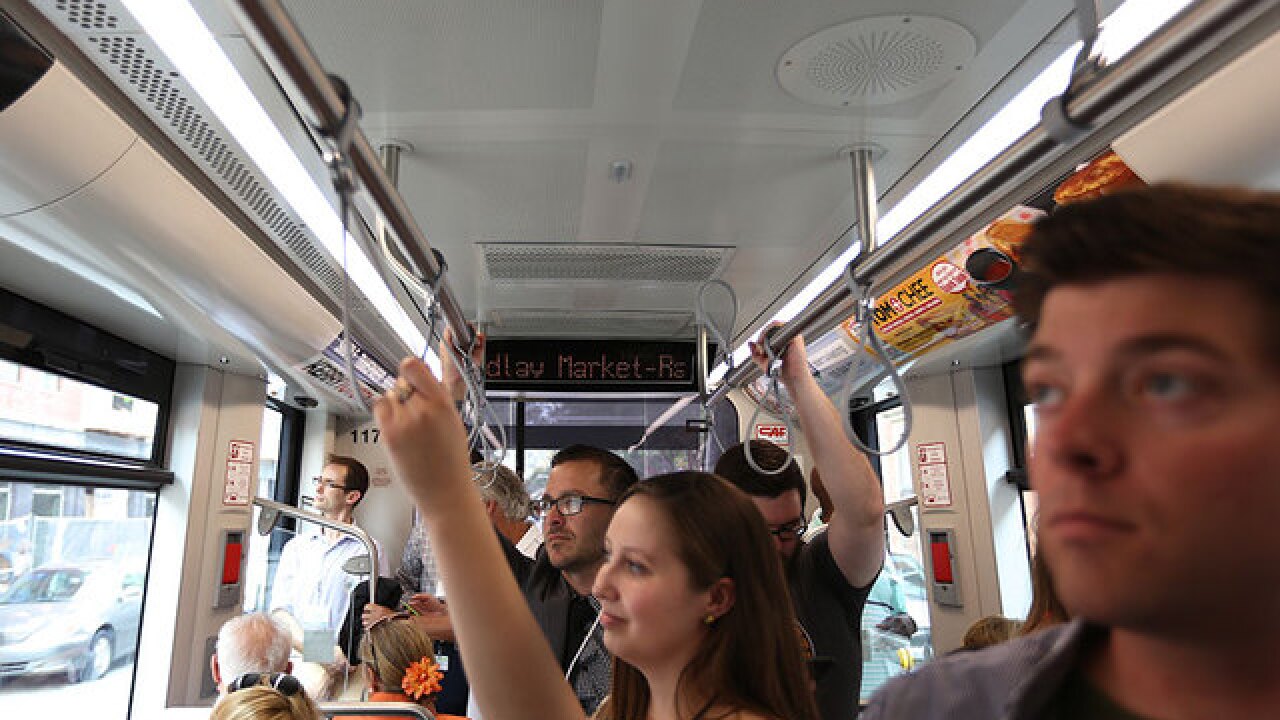 Cincinnati's streetcar opened for passenger service Sept. 9 to a huge swell of fanfare, coupled with a whole new arena of controversy, as the new transit system at times seemed overwhelmed by demand.

Supporters say it's a good problem to have: Probably the biggest issue now facing the streetcar, after nearly eight weeks of service, is how best to accommodate the thousands of riders it sees each day. What days and times are people riding most, and how many cars are needed when?

Anecdotally, it was clear from opening weekend that Downtown, Over-the-Rhine and The Banks are capable of generating enough draw to overwhelm the streetcar system. Opening weekend and Oktoberfest, a week later, saw streetcar stops packed with passengers that could not board when the streetcar arrived, due to overcrowding. Dozens of emails were sent to city leaders in the days following the launch, recounting the crowds.

But now that the honeymoon is coming to an end, what trends -- and surprises -- have arisen in streetcar ridership, and what can we anticipate moving forward? WCPO dug into the latest ridership numbers, and here's what we found:

1. Overall, more are riding than expected

To date, the transit authority calculates roughly 215,000 streetcar rides since its launch, which includes the 50,000 rides taken during opening weekend. If you disregard the outlier opening weekend numbers -- 18,141 on Friday, 17,160 on Saturday, and 15,345 on Sunday -- ridership averages to around 3,700 rides per day, just above the transit authority's projected 3,000 rides per day when drafting the streetcar's operating budget.

To put it mildly, the first two months of streetcar operations have revealed that the answer to this question is unclear.

It was a question raised before City Council, when Assistant City Administrator John Juech told council members earlier this month that an initial analysis of ridership numbers compared to revenue collected suggested only around half of all streetcar rides were actually paid for.

But some council members and transit officials pointed to several factors that could be skewing that analysis.

The notion that people aren't paying isn't that far-fetched, and no one suggests that it's not happening. Unlike Cincinnati Metro buses, which collect fare as riders board, each streetcar stop houses a fare box from which riders purchase their tickets before boarding one of several different entry points alongside the vehicle. The idea is that a fare inspector will periodically check, while in transit, that passengers have paid their fare (although, transit officials have admitted that they have not been too aggressive about this during the streetcar's infancy).

At the same time, though, the fare structure itself reveals that there is not a 1-to-1 correlation between a ticket purchased and a ride taken: Because streetcar fare is time-based, rather than trip-based ($1 for two hours or $2 for 24 hours), a passenger can purchase fare and ride once or ride 10 times throughout the course of that fare's lifespan.

Adding to the vague connection between ridership and fares purchased are the 30- and 60-day passes and first-week commemorative tokens sold prior to the streetcar's launch. While those who invested in these passes early on are likely to be supporters and riders of the streetcar, there is no way to know for sure.

And none of this mentions that a 30-day Cincinnati Metro pass also doubles as a streetcar pass.

Let's dig into the numbers. Here's a graph showing ridership levels from Sept. 9 through Oct. 25:

As the graph shows, beginning Oct. 1, streetcar ridership follows pretty consistent peaks and valleys based on the day of the week, a trend previewed even in the second half of September, after initial streetcar excitement and Oktoberfest had inflated ridership numbers at the start.

4. Weekends are winning, but are two cars enough?

It was a point of some tension not long after the streetcar's public debut: How many streetcars should run on the weekends?

The management and operations contract between the city and Transdev, the firm tasked with operating the streetcar under the transit authority's supervision, stipulated that two streetcars would run on the weekends, while three or four would run during the week, depending on the time of day. The contract also included a "special events" contingency, in which the transit authority could request extra funds from the city to operate additional vehicles in order to guarantee its promised 15-minute or less wait times on weekends.

But when SORTA requested an additional $20,000 to run extra streetcar vehicles during Oktoberfest -- which took place along the streetcar route during just its second weekend of operation -- City Manager Harry Black argued that the contract stipulates that it is Transdev's responsibility to ensure that the streetcar run at 15-minute intervals. Mayor John Cranley viewed SORTA's request as an attempt to pass that responsibility on to the city.

Ultimately, the firm coordinating advertising on the streetcars, Advertising Vehicles, offered to cover the extra cost for Oktoberfest.

The fact is that neither side of this argument is wrong, but that instead the contract is unclear, is a discrepancy both city and transit officials have agreed to iron out. The resulting compromise has yet to be announced.

But the real takeaway here is that, with weekend ridership often more than doubling -- sometimes tripling or quadrupling -- ridership during the week, additional vehicles are most likely needed on Saturdays and Sundays on more than a "special event" basis. During this discussion at City Hall, Councilwoman Yvette Simpson asked, "What even constitutes a 'special event' these days?" Juech had this response:

Asst. city admin: usually 6-8 events on PD radar each weekend. "We need to be honest with ourselves here."

Juech: Our emerging sense is that weekends are just going to be busier than weekdays.

Data so far suggests this is the case.

The high ridership demand -- particularly on weekends -- has also revealed, by way of frustrated riders waiting longer than the promised 15-minute-or-less wait times, that Downtown and Over-the-Rhine's traffic grid and signal patterns need adjusted in order to meet that demand.

Streetcar riders aren't the only ones frustrated: Downtown congestion has been an issue for years, long before the streetcar entered the mix.

For the first time in 20 years, the city of Cincinnati has embarked upon a traffic study that will look at signal timing, a move in large part prompted by the streetcar's arrival, as the question of how traffic signals should be timed -- favoring smaller vehicles like automobiles or larger vehicles like buses and streetcars, which usually move slower.

Like almost everything else streetcar-related, this sparked controversy in City Hall. During the Oct. 12 City Council meeting, council and Mayor Cranley debated over whether or not to direct the city administration to prepare a traffic signal plan that favored the streetcar's mobility.

The theory behind this thinking, originally introduced by Councilman Chris Seelbach during a transportation committee meeting two days prior, is an emerging traffic strategy operating on the notion that, by adjusting traffic signal timing to line up more with vehicles moving at speeds typical of buses and streetcars, it will maximize in-motion time for these larger vehicles. That, in theory, would lead to less congestion overall.

Cranley countered, though, saying "I don't believe that rush-hour traffic should have to wait for the streetcar," pointing to the 90 percent of city commuters who travel by car.

The language of council's instructions to the administration to study traffic patterns ultimately passed, but with the language favoring public transit removed.

While streetcar ridership is high on the weekends, Saturday ridership has outperformed Sunday ridership every weekend of operation so far, often by a margin of more than 2-to-1.

This holds true even during the three Bengals home games played at Paul Brown Stadium since the streetcar's launch. Take a look at these comparisons:

The exception to this rule was when the Bengals played the Miami Dolphins during Thursday Night Football:

The home opener's streetcar numbers were especially surprising, given the combination of the streetcar's lingering novelty and the 65,000 fans estimated to descend upon Paul Brown Stadium, which is just a hefty stone's throw from the streetcar route on The Banks.

Transit authority data identify the three highest ridership periods as all day Saturday, all day Sunday -- as expected from the shape of the ridership graph above -- and, finally, weekdays between 11 a.m. and 3 p.m.: i.e., the lunch block.

A WCPO analysis of hourly ridership data found an average of about 77 passengers onboard a streetcar vehicle between the hours 11 a.m. and 1 p.m. -- peak lunchtime -- compared to an average of 16 passengers during the early morning hours.

8. Mondays and Tuesdays lag behind

The streetcar might relate to those who work a Monday-Friday job, because data show that ridership -- like many of us feel on a Monday morning -- is sluggish.

The average ridership on Mondays and Tuesdays hovers around 1,900 rides per day, just barely more than half the overall average of 3,700. If you take away the first Monday and Tuesday of operations -- when streetcar buzz was still at its peak -- that average drops closer to 1,700 rides per day.

SORTA's original recommendation for hours of streetcar operation were far more conservative than the operation schedule that came to fruition: Initially, the streetcar was proposed to stop service at 10 p.m. during the week and Sundays, and at midnight on Saturdays.

But critics of that plan worried that those hours -- especially on Friday and Saturday nights -- would miss out on a key demographic of potential riders: people leaving the dozens of bars and restaurants located along or near the streetcar route. They held that the streetcar should instead run until 1 or 2 a.m., to catch these potential riders as they made their way home. The suggestion for longer hours made some worry about the increased operations cost that would come with it.

But in an "If you build it, they will come" fashion, the hourly data for weekday and Saturday evenings show that ridership continues on the streetcar well past the 10 p.m. mark: During the week, the streetcars still operating at that hour are carrying an average of 15 people at 12:45 a.m., with that average hovering closer to 20 on Saturdays.