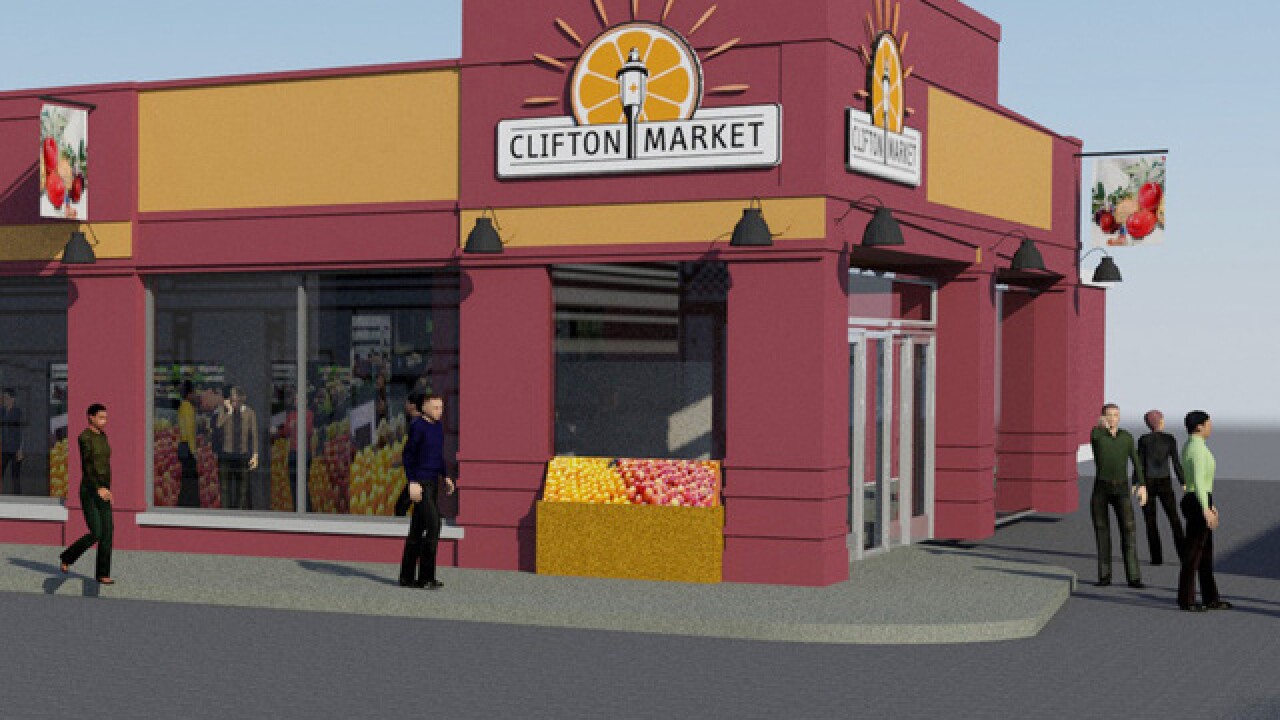 An announcement — “we're now a construction zone” — was posted Thursday afternoon on the co-op market’s Facebook page. It’s the latest step in what has been a years-long process to re-open a grocery along Clifton’s business artery.

The start of construction is two months behind the backers’ original schedule. They had forecast a Feb. 1 start date after securing full funding for the $5 million project in December. Charles Marxen, Clifton Market’s field director, said the later start was the result of delays in finalizing construction drawings from some equipment suppliers.

Preparatory work, including paint-color tests on a column outside the entrance, has been visible to passersby on Ludlow for more than a week. Turnbull-Wahlert Construction is the project’s contractor. The market’s post said a construction trailer would soon be set up in the parking lot behind the gutted structure at 319 Ludlow Ave.

As now envisaged, Clifton Market is to be a full-service, “uptrend” grocery offering organic and local fruits and vegetables, meat and seafood, wine and beer, and dry goods. It would fill the void left when Keller’s IGA, a neighborhood fixture for more than 70 years, was closed late in 2010 by the state of Ohio over back taxes.

The drive to fund the store was capped late last year. The financing includes $3 million in loans — including $1.88 million from the National Cooperative Bank and $1.1 million from Shared Capital Cooperative, which both specialize in co-op businesses. More than 1,200 community members also bought shares at $250, and the effort earned a 12-year tax abatement from the city that’s worth about $1 million in savings.

In mid-February, the market announced that Keith Brock had been hired as the store’s general manager. Brock has nearly 15 years’ experience in the grocery business and another decade in food service. He most recently worked as a store director for Fresh Thyme stores.

Clifton Market is expected to be a catalyst to reinvigorate the Ludlow Avenue business district, which has been hard hit by the loss of Keller’s foot traffic and large developments in nearby University Heights that have drawn UC students to the south side of the main campus.

According to Marilyn Hyland, Clifton Market’s director of marketing, the group is looking at the following timeline to complete the project:

That target to open is partly symbolic. “We want to be open by Sept. 21,” Hyland said, “because that’s the end of summer.”

The market is expecting to employ about 90 people. Though hiring won’t begin officially for a month or two, Clifton Market is accepting resumes by email at info@cliftonmarket.com.