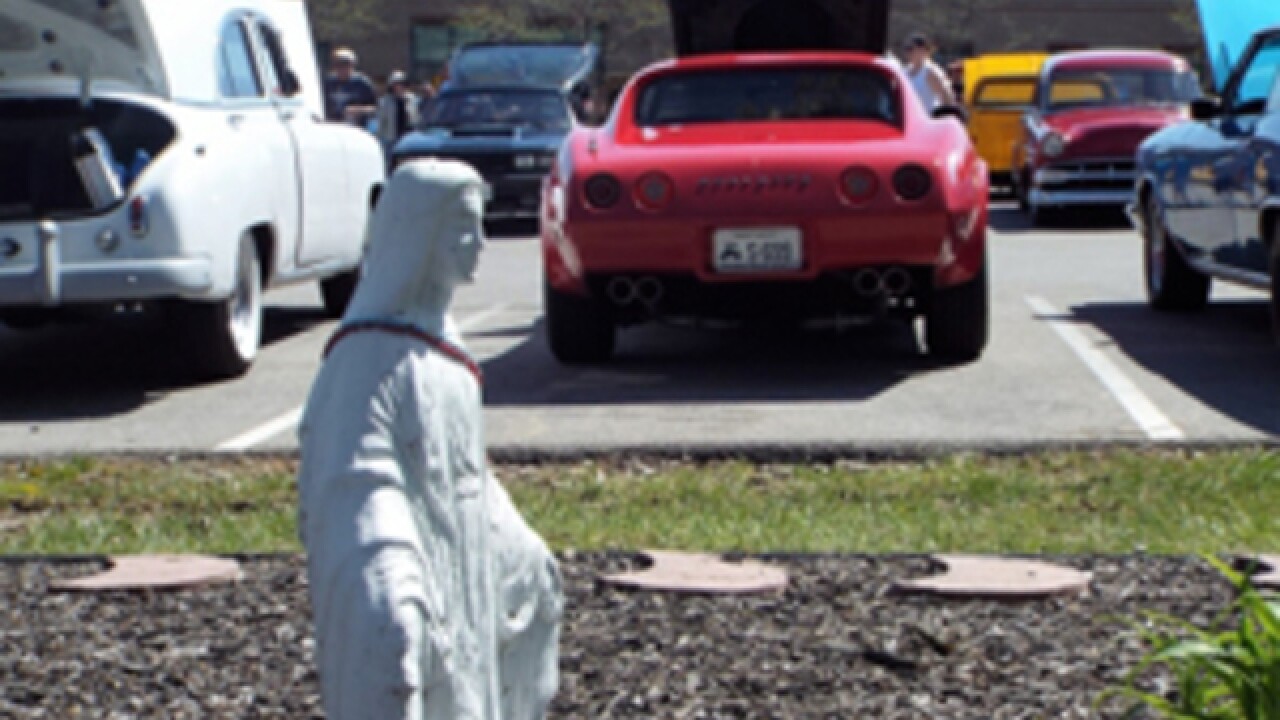 Kevin Eigelbach, WCPO contributor
<p>A statue of the Virgin Mary in a prayer garden at Immaculate Heart of Mary Church in Burlington, Ky., watches over the classic cars at a car show April 16 in the church parking lot.</p><p> </p>

BURLINGTON, Ky. -- Ken DeMaria has loved cars ever since his family won the use of a turbine car, an experimental vehicle with a small jet engine, in the 1960s.

“It sounded like a vacuum cleaner,” he said. “Every time we went to Kroger’s, there’d be 100 people around.”

Over the years, he’s collected a few cars that weren’t classics when he bought them, but are now: a ’68 Dodge Charger, a ’67 Plymouth Fury Convertible and a ’77 Cordoba.

“When it came time to trade them in, they were not worth anything, so we kept them,” he said.

So when he started working as a maintenance man at Immaculate Heart of Mary Church in Burlington, he proposed having a car show in the church parking lot. The third edition of that show took place April 16, and every participant had a story like DeMaria’s.

Jim Newman, of Florence, brought his ’64 Mustang, which he said was the 1,115th Mustang to roll off the Ford production line in Dearborn, Michigan, on March 16, 1964, the first week of Mustang production ever.

Bill Goodman, of Hebron, brought his brand-new Corvette Stingray. Tricked out with leather seats that could be smelled 10 feet away, it cost him $71,000. Even the brake caliper covers, normally hidden behind the hubcaps, looked fancy.

Butch Whitefoot, also of Hebron, brought a less-expensive 2014 model, which was the first year Chevrolet resumed production of Stingrays after discontinuing them in 1976. He had heard about the Burlington event at the Quaker State and Lube restaurant in Florence, which has a “cruise-in” every Monday night.

Roy Anglin, of Hebron, brought a politically incorrect, custom-made truck decked out with a large Confederate flag covering the bed, a couple of American flags flying from the cab and a tray, hung outside one window, with a plastic model of a drive-in meal.

The cab came from a ’72 Ford GMC that he had traded a ’41 Cadillac for. He put the cab on an ’87 Ford van chassis, along with the sleeping compartment from a ’78 Peterbilt tractor. It always attracts lots of comments at car shows, he said.

At the peak of the show at Immaculate Heart of Mary, there were 67 cars on the lot, DeMaria said, which was not as many as the 100 he had hoped for, but still the most in the show’s history. Volunteers from the Bishop Ackerman Council of the Knights of Columbus, a Catholic social-service organization, raised about $500 for their work by selling hot dogs, brats and soft drinks.

“The most important thing is just having fun,” the 67-year-old DeMaria said. “It’s all a bunch of guys my age, showing off.”

Even the pastor of Immaculate Heart of Mary, Father Michael Norton, was there to give his blessing. Cars are a part of American history and culture, he said.

It’s unusual for a religious organization to host a car show, but it’s not unheard of. Two years ago, when he was planning the Burlington car show, DeMaria visited one at the Union Baptist Church.

Union Baptist has held a free car show, along with a model car show, as an outreach to the community for six years now, with the seventh edition to be held Sept. 17, said youth and outreach pastor Allen Brooks. Last year, only about 100 cars were entered because it rained, he said, but two years ago there were 180.

The church gives prizes to the best real cars and best model cars in several categories, he said, as well as free hot dogs, chips and cookies. There are also activities for children, such as an inflatable slide and booths where visitors can get more information about the church’s ministries.

“Our people like it, and they enjoy serving,” Brooks said. “Everyone comes and has a great time."