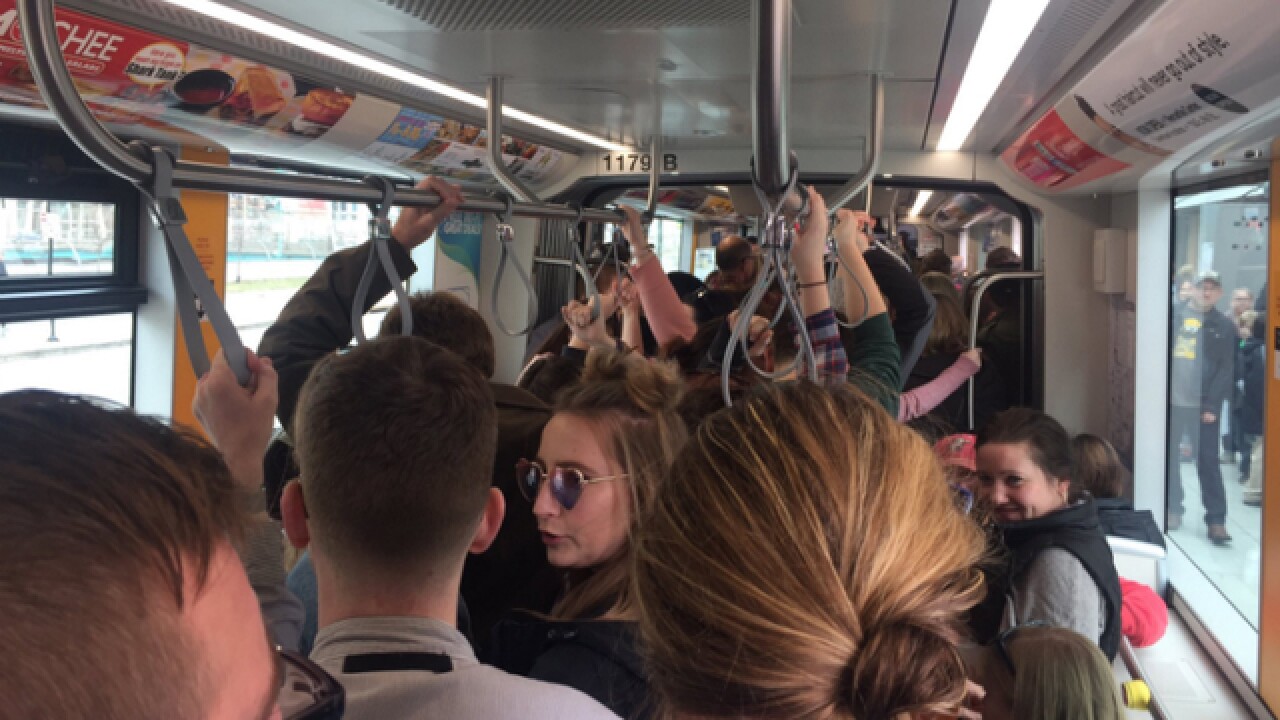 Since the Cincinnati Bell Connector's launch last September, ridership numbers steadily fell with the temperatures -- a consequence officials attribute not just to the season but also to lingering technical and mechanical issues with the streetcar vehicles and station stop hardware. February saw the streetcar's first increase in monthly ridership.

Reds Opening Day, though, could be the turning point back into streetcar busy season. At least that's what city and transit officials hope.

Opening Day marks the start of what City Council member and transportation committee chair Amy Murray hopes will finally offer a full picture of streetcar ridership trends. The 2017 season will be the streetcar's first Reds season.

"You need to have the whole picture," she said.

"We do expect there to be an increase in ridership as the weather gets warmer," said Brandy Jones, spokeswoman for the Southwest Ohio Regional Transit Authority, which oversees streetcar operations. "Even in winter months, we saw a bump in ridership on warmer days."

Concern began to rise when November saw a significant drop in weekend ridership, which has continued to generate the highest number of rides since the streetcar's launch. The decline drew criticism from some on council who pointed to wide gaps between daily ridership during the week and the transit authority's initial projections.

"Projections are just that, projections, based on trends in other cities and the expertise of the consultant at the time," SORTA director of external affairs, Sallie Hilvers told WCPO last fall.

Paul Grether, SORTA's director of rail services, addressed council members' concerns by pointing out that the initial ridership estimates were flat projections -- meaning a static number of rides projected for every weekday and another for every weekend, throughout the entire year.

In other words, on a daily scale, the numbers didn't take season, events or other factors into account.

"Ridership tends to reflect both the weather and activities in the city. We've seen that in our buses, too," Jones said.

The gap between weekday and weekend ridership had Murray and others on council scratching their heads, because initial estimates predicted weekdays would outpace Saturday and Sunday ridership.

"We just haven't seen that," Murray said. "I'm interested to see in the summer months, since we haven't had those months, does it pick up on the weekdays?"

But low winter ridership numbers are only one side of the coin. On the other we have what some leaders last fall characterized as a good problem, but a problem nonetheless: over-capacity during special events.

Oktoberfest, which fell just two weeks after the streetcar's launch and changed locations to accommodate streetcar service, remains the second-highest ridership weekend in the streetcar's nearly seven months of operation, with more than 20,000 rides. The streetcar's opening weekend is the only weekend to top that, with well over 30,000.

The heavy crowds meant full streetcars and long waits to get onboard. Confusion with the ticketing process made things even more frustrating for would-be riders.

Council and SORTA put pressure on Transdev -- the firm contracted to maintain and operate the streetcar -- to run additional streetcar vehicles during that weekend, a cost covered by Cincinnati Bell in the 11th hour. The scramble to finance the additional cars and operator hours sparked a debate over how many cars Transdev is contractually obligated to run on Saturdays and Sundays.

"That's always going to be a hard issue on days like Opening Day," Murray said. "Days when you have thousands of people that are Downtown wanting to ride the streetcar."

Murray said she feels confident that the city and SORTA have ironed out most of the logistical, mechanical and technical issues, but also said this summer will be the streetcar's real test.

"I think during the summer, we should be better able to handle it, because it's ebb and flow," she said. "We've had the winter to work with SORTA and the operators on this, and hopefully they have them fixed and we'll be able to move ahead."

"If you do it on CincyEZ app, you don't have to wait in that line," she said.

Aside from the big events like Opening Day and Taste of Cincinnati, Reds games will be the most consistent draw to The Banks, where the streetcar's first stop is located.

That makes game attendance a factor that could play into streetcar ridership, and that may or may not be a good thing. Last year saw a significant drop in attendance at Great American Ball Park, falling from 2.4 million in 2015 to 1.9 million last year, according to ESPN attendance data.

While most agree the Reds' 2017 prospects are uncertain, veteran Reds reporter and WCPO contributor John Fay maintains hope for this season.

"I just want all the systems to work," she said. "We really expected to have that happen early on and not have all the issues we've had. We've got to get that handled, especially as the warranties will expire next June (2018). So we need to make sure that this is covered."