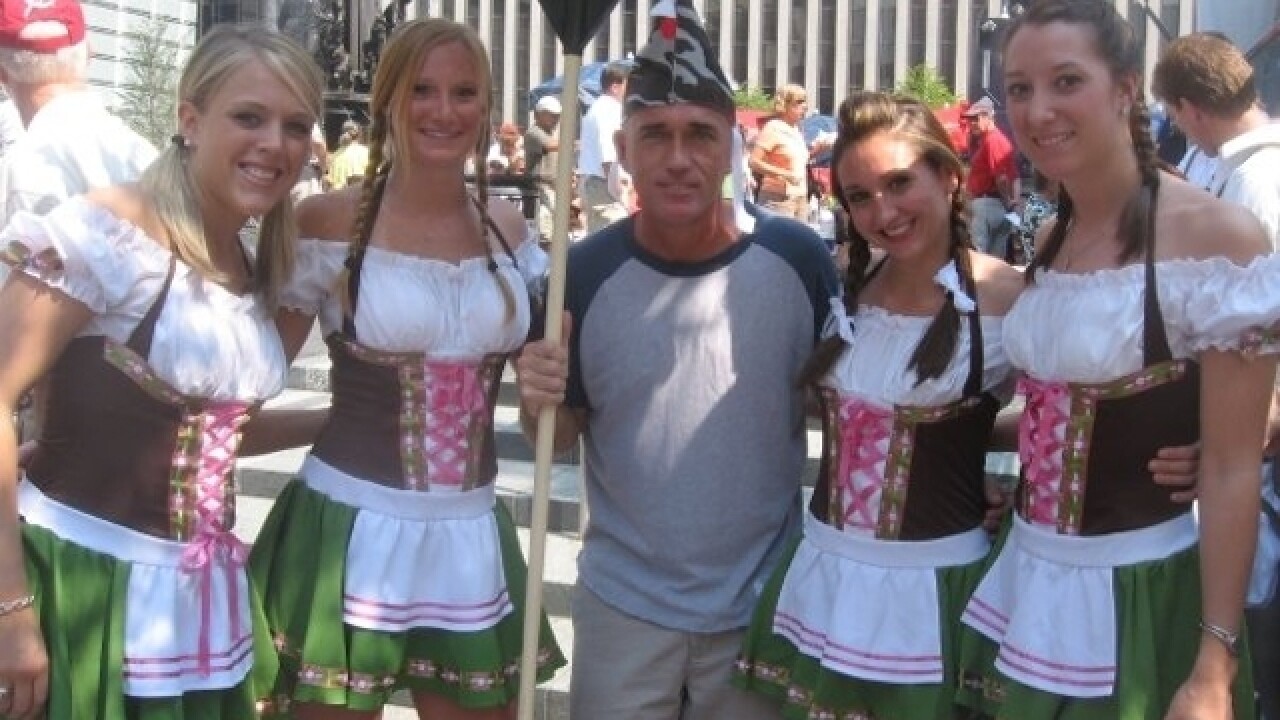 Copyright 2017 Scripps Media, Inc. All rights reserved. This material may not be published, broadcast, rewritten, or redistributed.
<p>John Harrell sells his chicken hats during Oktoberfest Zinzinnati before the German festival moved from Fifth Street to its current location at Second and Third streets between Elm and Walnut streets Downtown.</p>

“This will be my 21st year selling chicken hats at Oktoberfest Zinzinnati,” said Harrell. “I can’t believe it’s going to be that long.”

RELATED:  Here's everything you need to know about Oktoberfest Zinzinnati 2017

Since 1996, Harrell has shouted bad poultry puns while selling his chicken-shaped hats, which he makes out of felt and adorns with googly eyes and feathers.

The New Mexico resident estimates he has sold more than 20,000 chicken hats at Oktoberfest Zinzinnati. He plans to sell 1,200 hats at this year's festival, which will run Friday through Sunday on Second and Third streets between Elm and Walnut streets.

Though he has never changed the hat’s design, Harrell did start making them in multiple colors after selling only white hats for the first seven years. The most popular chicken hat Harrell ever sold at Oktoberfest Zinzinnati was a Bengals-striped black-and-orange felt pattern about a decade ago.

“Unfortunately, I can no longer find that felt pattern anywhere anymore,” Harrell said. “If I can ever get my hands on the Bengal-type material again, I would probably come back with 2,500 each year. Now people wear [hats] around the festival that they bought from me 10 years ago.”

Selling chicken hats is not a full-time career for the Chicken Man. This year he will sell his hats at only four Oktoberfests: one in Addison, Texas; another in Colorado; Oktoberfest Zinzinnati; and the Minster Oktoberfest in Minster, Ohio.

“It’s not like it’s a business that makes me much money, if at all,” said Harrell, who is a full-time investor and stock adviser.

Harrell described going to Oktoberfests and selling his hats as a fun hobby that continues in the spirit of the early 1990s Addison Oktoberfest trip he took with friends. That experience sparked the hat idea.

“All 25 of us got on stage, and we learned how to do the Chicken Dance together,” Harrell said. “After that, I went home and made my own version of what I thought a chicken hat would be. I started wearing it around just for the fun of it, and people loved it. I was amazed by the response and thought, ‘You know what? I can sell these things.””

The Cincinnati chicken hat tradition almost never happened, though, he said: He initially could not persuade Oktoberfest Zinzinnati's organizer, the Cincinnati USA Regional Chamber, to let him sell his hats on Fifth Street, where the festival was previously located.

“I called ahead, and they said no,” Harrell said. “They didn't understand what a chicken hat would have to do with Oktoberfest.”

Undeterred, Harrell said he instead got a city of Cincinnati street vendor permit and sold his hats on Race Street. He even remembered a nearby Walgreens store letting him borrow a folding table, on which he placed his chicken hats.

“Before you know it, people were coming out of Oktoberfest to buy my hats,” Harrell said. “Then, late in the day, here comes a group of people. I thought, ‘Ah oh, this looks like a committee of sorts.’”

The "committee" was members of Cincinnati USA. Harrell said they told him, “‘OK, Chicken Man, we know that we told you no, but people are coming out of Oktoberfest to buy your hats. You can fold up the table and sell the hats on Fifth Street.”

Cynthia Oxley, director of sponsorship at the Cincinnati USA Regional Chamber, said she started working at the chamber three years after Harrell started selling his hats but is well aware of their popularity.

“It’s just bizarre to me that people have so much fun with the hats,” Oxley said. “People have collections. I think it’s become one of those things that if we didn't have him there, people would be up in arms.”

"He ends each of his emails to the chamber with 'Have a PECKtacular day,'" she said.