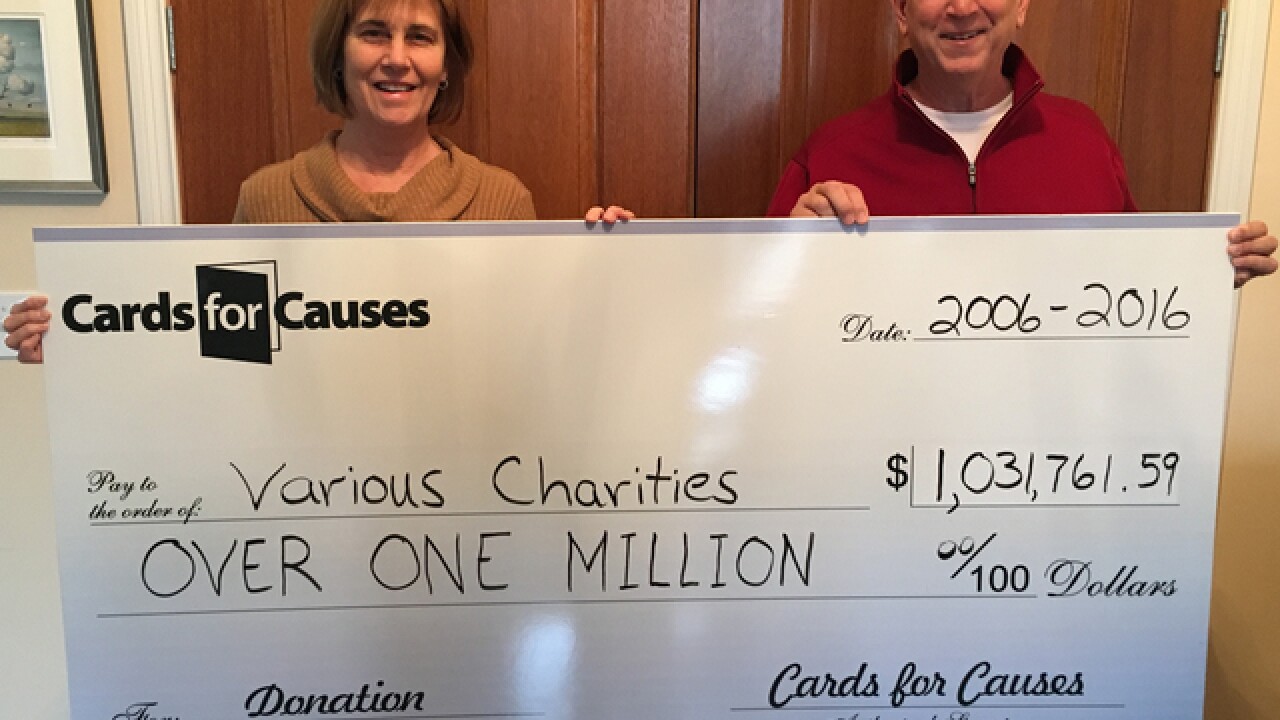 Copyright 2017 Scripps Media, Inc. All rights reserved. This material may not be published, broadcast, rewritten, or redistributed.
Contributed
<p>Mike and Debbie Rabidoux at the end of 2016 when the couple achieved the $1 million donation goal.</p>

BURLINGTON, Ky. -- Many couples nearing retirement age have a magic number -- an amount they would like to accumulate in their 401(k), IRAs or other retirement accounts -- before they take the leap. Mike and Debbie Rabidoux took a different approach.

The Burlington couple are heading into semi-retirement after reaching a more unique goal: $1 million in donations to hundreds of charities across the globe through their greeting-card business, Cards for Causes.

It all started back in 2005 when Hurricane Katrina hit New Orleans. At the time, the Rabidouxs operated a small website that sold holiday cards and decided to quietly support the American Red Cross with a portion of their sales to help the victims. But word quickly got out, and orders started pouring in.

“Our initial goal was to raise $1,000 for the Red Cross,” Mike Rabidoux explained. “We didn’t really advertise it, but we started getting calls from customers across the country who had heard about what we were doing.”

The big response from customers was unexpected, he said. Even more surprising: an order of 10,000 cards from a law firm in New Orleans.

“At the time, a normal order for us ranged from about 100 to 150 cards,” Rabidoux said. "A portion of that order, and lots of smaller card orders, raised nearly $4,000 for the Red Cross’ Hurricane Katrina relief efforts," he said.

The success of the small fundraising campaign was the launchpad for Cards for Causes. The idea was pretty simple: offering customers personalized greeting cards and donating 20 percent of the sale price to a nonprofit of their choice.

It turns out there was a big demand for it. Their first year, the couple celebrated $75,000 in sales. Last year, a little more than 10 years later, sales topped $1 million.

After reaching $1 million in annual sales and hitting the $1 million mark in overall donations, the Rabidouxs, both in their early 60s, sold the company in July to a Texas-based group.

“We found someone to continue our work,” Rabidoux said of the sale.

Both will continue to work with the new owners as consultants through the end of the year, he said. They’re also working on a new, separate, part-time business venture.

Their work with Cards for Causes was quite a labor of love, Mike says. Over the past decade, the company grew to offer more than 1,300 different cards on the site and sold hundreds of thousands of them each year. The couple ran the business out of their Northern Kentucky home with just a few outside contractors to help out. And card sales grew every year.

Customers ranged from individual families, who ordered 25 Christmas cards each year, to Fortune 500 companies that would place orders of more than 25,000. Together, they donated money to a list that grew to more than 600 charities.

The bottom line: Philanthropy isn't just good, it's also good for business, according to Mike Rabidoux.

The Red Cross remains one of the top recipients each year, he said, as does the Wounded Warrior Project, American Cancer Society and St. Jude Children’s Research Hospital.

“It was really exciting for us to be able to help all of these organizations,” he said. “Your customers are really loyal when they know you’re doing good in the world.”

The Red Cross’ Greater Cincinnati/Ohio River Valley chapter profiled the couple last October on its regional blog. The Rabidouxs found a “business niche that desperately needed to be filled,” the post states.

Rabidoux said the business model is a “win-win-win” and encourages other small businesses to give back in a similar manner.

“It was good for our customers, good for nonprofits and good for us,” he said. “If we were able to do it -- just two people working out of their house -- any small business can help make their community better.”