Broo View: If the bookies were calling the shots, you could count the Bengals out already

But it's much too early to make predictions 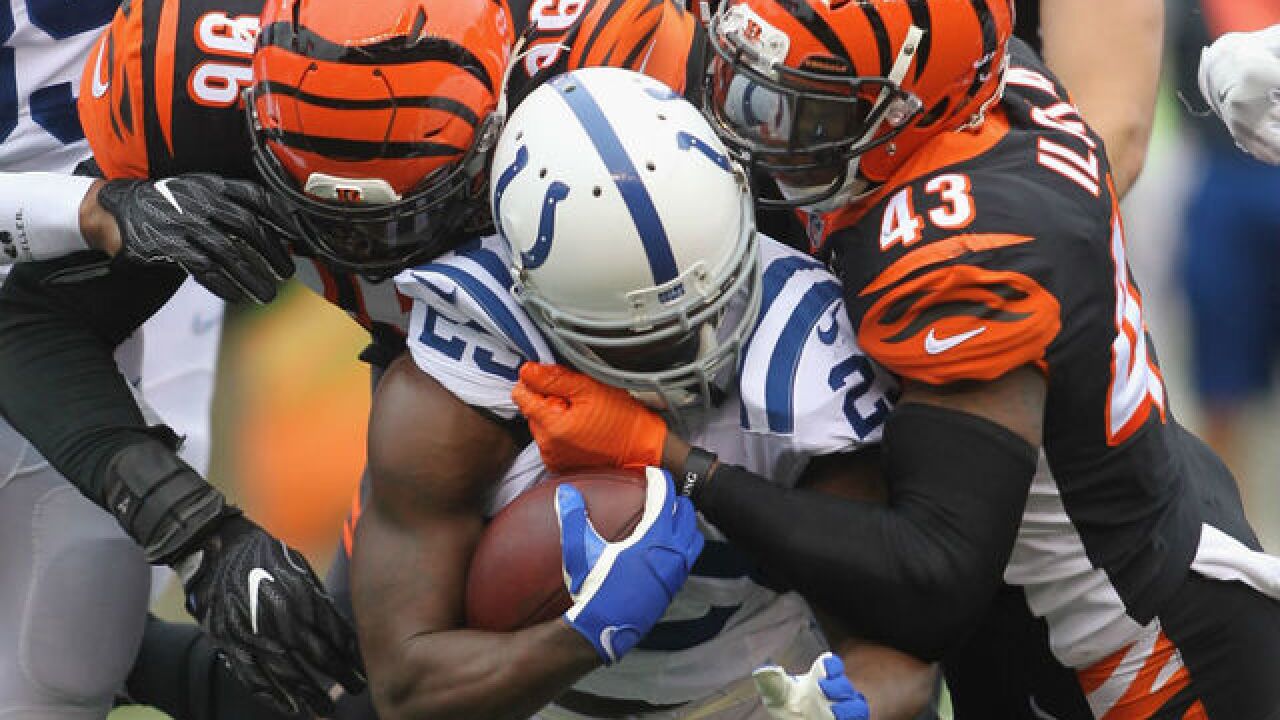 Image copyright 2017 Getty Images. All rights reserved. This material may not be published, broadcast, rewritten, or redistributed.
John Grieshop | Getty Images
<p>Carlos Dunlap #96, Vontaze Burfict #55 and George Iloka #43 of the Cincinnati Bengals tackle Frank Gore #23 of the Indianapolis Colts during their game at Paul Brown Stadium on Oct. 29, 2017. </p>

CINCINNATI -- The Cincinnati Bengals to the Super Bowl this season? Vegas says, "Don't bet on it."

In fact, some sports books out in the desert say you're taking a risk if you bet the "over" on total wins for your men in stripes.

The thing to remember about any posted bet is this: It's not a prediction. The "books" set a number that they believe will create action on both sides, but clearly the Bengals aren't inspiring a lot of national belief.

Vegas Insider even has the Bengals at 100-1 to be hoisting football's ultimate trophy next February. Those are the exact same odds that website gives to the Bears, Browns and Dolphins.

But what do they or ESPN know? Most of what's being predicted for the 2018 NFL season is just lip flapping. You want to predict how many games a team will win in November? Tell me how many of its players will be healthy or how many of its opponents' will.

The lack of faith in your Bengals doesn't end there. Last week, espn.com ranked the rosters of every NFL team. They had the Bengals 18th out of 32 NFL teams. The Steelers roster was rated seventh, the Ravens 20th and the Browns dead last.

Of the players currently on the Bengals roster, espn.com ranked exactly two elite players: AJ Green and Geno Atkins. Most of the Bengals roster fell into the "average" category. Only one Bengals offensive lineman, Clint Boling, achieved a rank of "average." On defense, starting cornerback Dre Kirkpatrick was ranked as "poor."

The Bengals have the NFL right where they want them, or maybe it's the other way around.

Look, we all know why the national perception of the Bengals is the way it is: Marvin Lewis, their record in the playoffs, their record the last two seasons. Put that with a large turnover on the coaching staff in the last two years and, voila, welcome to 2018.

The only problem with all of that is a rather large one. In professional sports, past is not always prologue. Times change, teams change. The coach's creed is every season is different. And as much has coaches babble with nonsense, the creed is often true.

So here we are now, just three weeks from the start of training camp. The Bengals appear to be better than last season -- not wildly better, just better. They had a pedestrian offseason, but in a large way, they needed that.

"If you're drafting a center with a first-round pick, people are yawning. And I understand that from being on the Hall of Fame selection committee. We don't put centers in the Hall of Fame. We put in one, in the last 20 years." This is Clark Judge talking. He has covered the NFL for various newspapers and websites for his entire adult life. He runs the Talk of Fame website and weekly radio show.

"But here, it's not too much different, and I'm not going to make a strong analogy here, from what the Atlanta Falcons did a couple of years ago," Judge said. "And that's when they brought in Alex Mack and said, 'We've got to solidify the center of our offensive line.' "

This would be Billy Price that Judge is talking about. From all indications, Price is bigger, stronger and smarter than any center the Bengals have had since Rich Braham. And he has been gone 12 years now.

"Billy Price, to get him where they did? This is a guy who didn't miss a start in 55 games at Ohio State. He's durable. He's tough. He's the kind of guy you want in the middle of the line. When they (the Falcons offensive line) protected Matt Ryan like they did, you saw the difference. You really did see a complete change in that offense, and in Ryan, in particular," Judge said.

Mack arrived in Atlanta in 2016. The Falcons, of course, went to the Super Bowl that season.

The Bengals' problem isn't dissimilar to what the Falcons were facing before they brought in Mack. Atlanta's line wasn't as dismal as the Bengals' line has been the last two seasons. The Bengals allowed 80 sacks the past two seasons. Not all of those were the line's fault, but most of them were.

Cordy Glenn should be a huge upgrade over the guys the Bengals were running out onto the field to play (allegedly) left tackle last season. Glenn's problem is heath. He played in only six games last season, nursing a bad foot. The Bengals still have issues on the right side of their line. Andre Smith is gone, again. Jake Fisher is healthy, again, over his heart issues. And the right guard spot is so wide open, you might consider applying.

But there's only so much you can do in one offseason, at least by Bengals standards. This is a team that, historically, hasn't embraced the concept of free agency. Maybe if it didn't have the word "free," it'd be a different story. You would never see the Bengals do what the Jacksonville Jaguars did a year ago, signing 13 free agents, three in the first day of business. But trading for Glenn and drafting Price was a start.

"I'm not saying these guys are going to the Super Bowl, like the Falcons did," Judge told me. "But it made sense. If you're going to bet on Andy Dalton, and the Bengals are --  they made it very clear -- protect him."

Dalton, by the way, grades as "average" in the espn.com player rankings. And maybe because of that, the Bengals, as a whole, grade as an average team.

The Eagles' roster grades best in the NFL. They have a wealth of riches at quarterback with Carson Wentz and Nick Foles. The Falcons are ranked second, with Matt Ryan. Drew Brees earns the Saints' roster a third-best ranking. The Patriots are fourth on the espn.com list.

But football seasons aren't a function of rankings. Most seasons turn on health and luck. No teams should be anointed a champion in July. And no team, not even the average ones, should be counted out.

"Their running game stunk last year," said Judge of the local squad. "The team offense was dead last last year. Well, do something about it. You've got some weapons. You've got a quarterback you're committed to. So protect him."

We won't have to wait long until we find out how that's going.

Now, to sound out things that have been bouncing around in my head like a ping-pong ball in a dance club:

This is a good time to wish singer, songwriter and showman Huey Lewis a happy 68th birthday. And some good wishes, too, as he battles health issues. This is one of his earliest hits. But it's also one of my all-time favorites.

This is from his 1982 album "Picture This." The song peaked at No. 7 36 years ago. It was written by the prolific songwriter "Mutt" Lange, who was married for a hot minute to Shania Twain.

Lewis didn't want to record this song, largely because he had no hand in writing it and thought it was too commercialized in sound. But he and Lange, who knew each other from working together in Lewis' first band, "Clover," were under pressure from their label to produce a breakout hit. Lange convinced Lewis this would be that hit. Turns out, Lange was spot on. By the way, as on so many of Lewis' hits, sax player Johnny Colla is an absolute star on this song.

Times have turned tough for Lewis. He was forced to cancel his entire 2018 tour because, he said, his hearing has deteriorated so badly, he can't sing anymore.

I remember seeing Lewis, a huge 49ers fan, immediately after the Bengals-49ers Super Bowl in Miami in 1989. We were both stuck in a sea of people. He was in a human mass flowing toward the 49ers' locker room. I was in another human mass heading toward the Bengals' locker room. The human flows of traffic stopped just as Lewis and I were next to each other. We literally looked at each other at the same moment. I had no idea what to say. He, of course, was ecstatic about the outcome of the game. So all I said to him was a title from one of his songs. I said, "Well, if this it ..." He looked at me and said, "It better not be." It wasn't, of course for the 49ers. They had two more Super Bowl wins left in them. For the Bengals? Sigh.

Anyway, happy belated 68th birthday to the man who delivered the News back in the day, born Hugh Cregg III on July 5, 1950, in New York City. You, of course, know him as Huey Lewis.