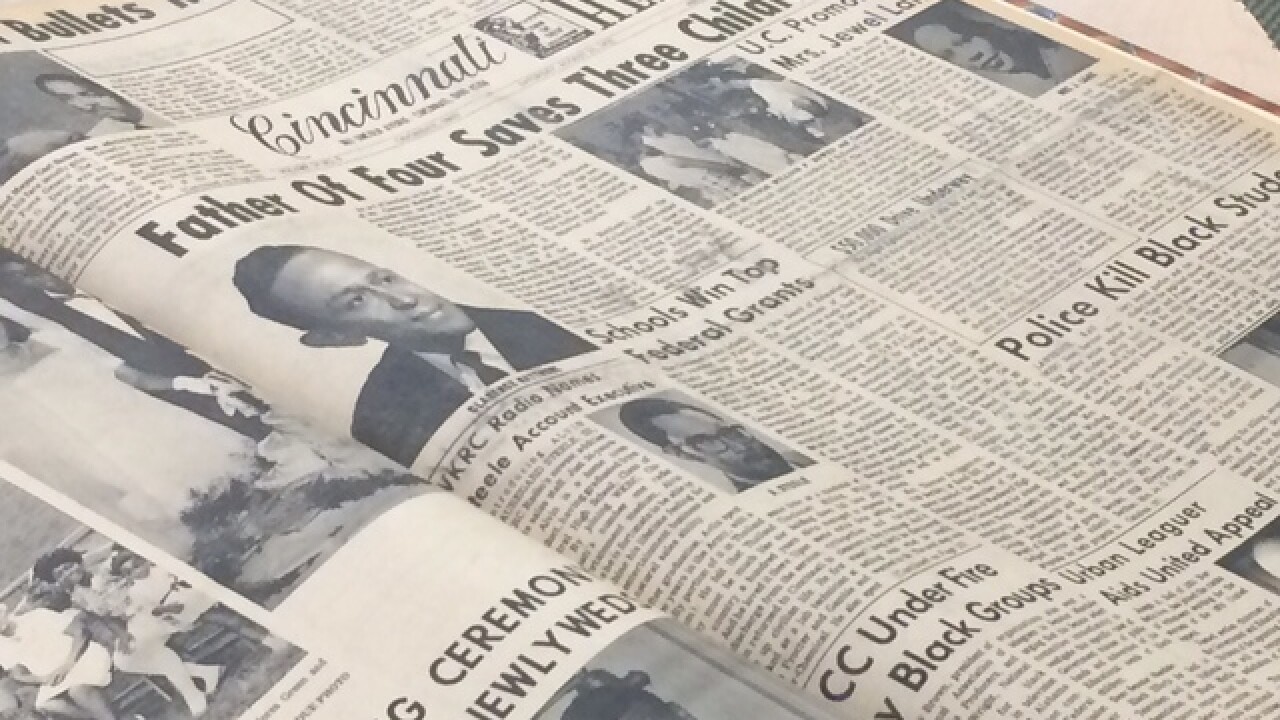 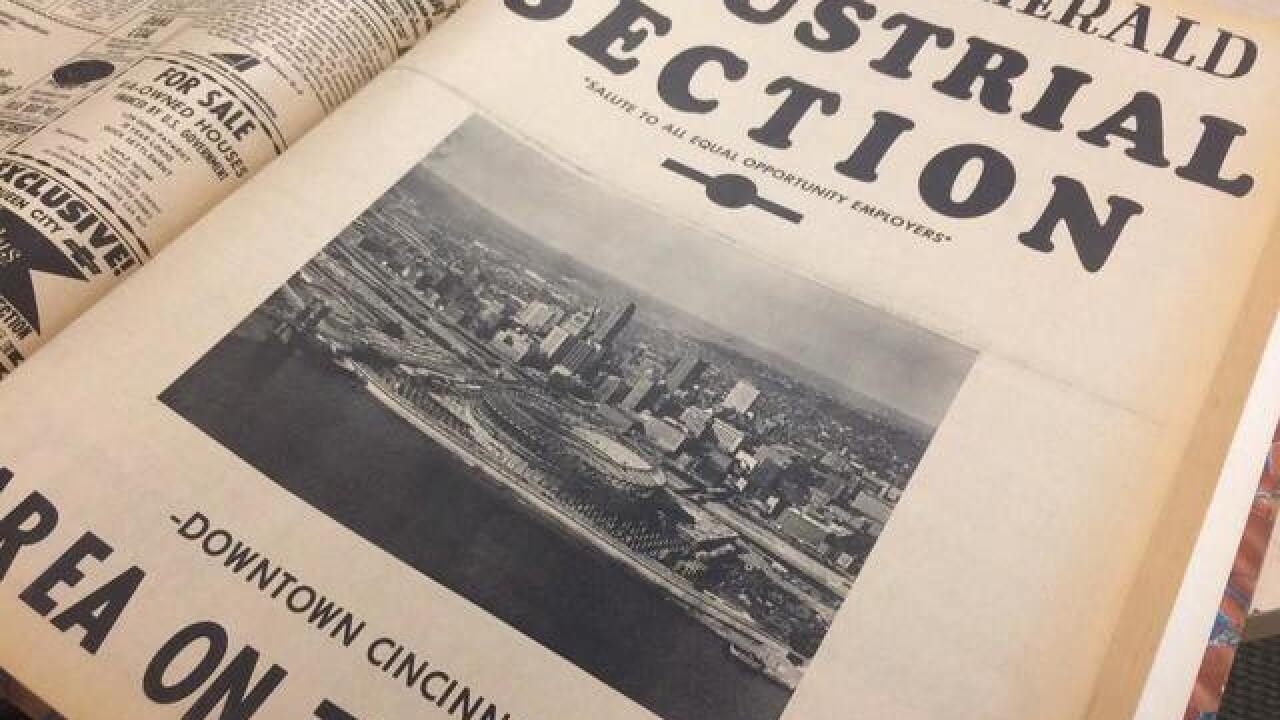 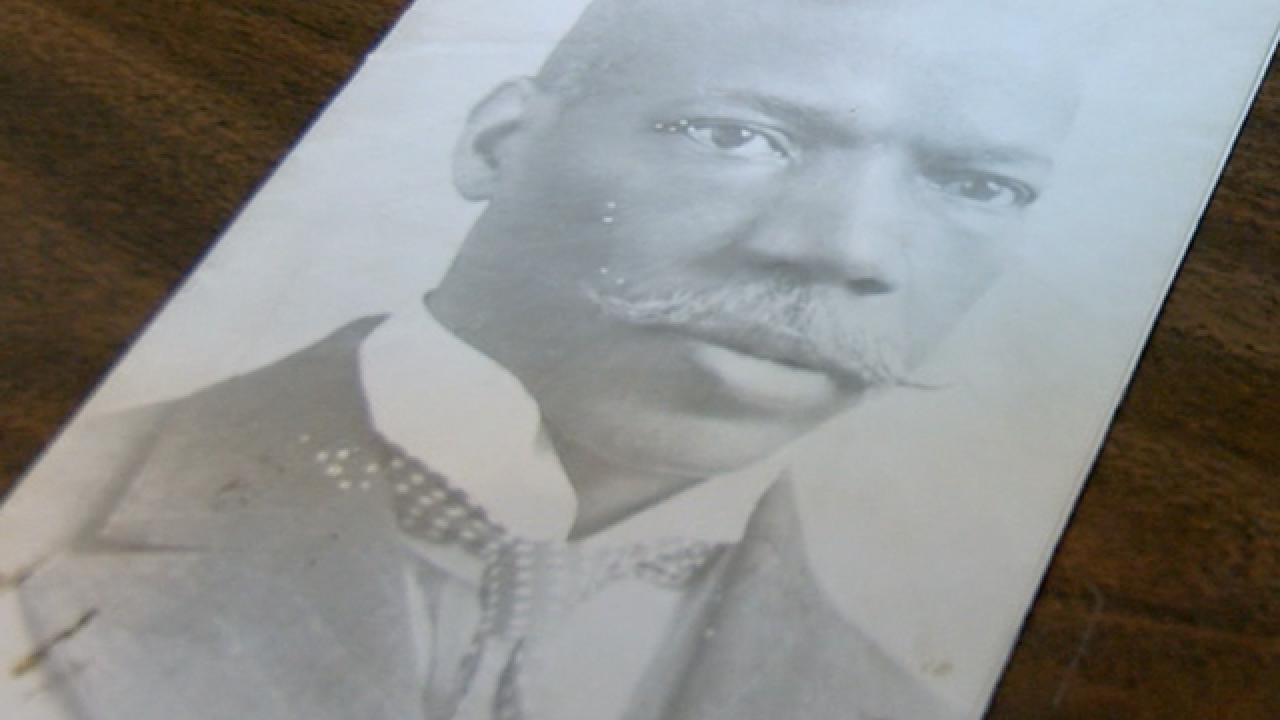 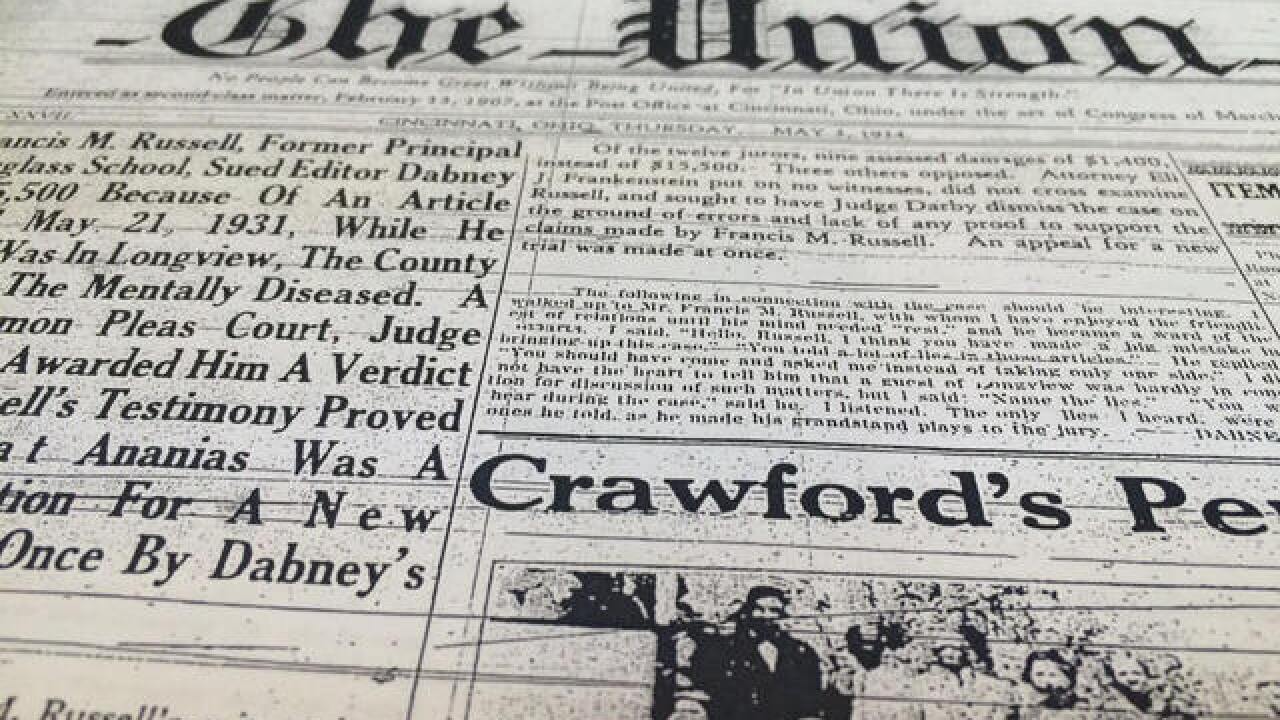 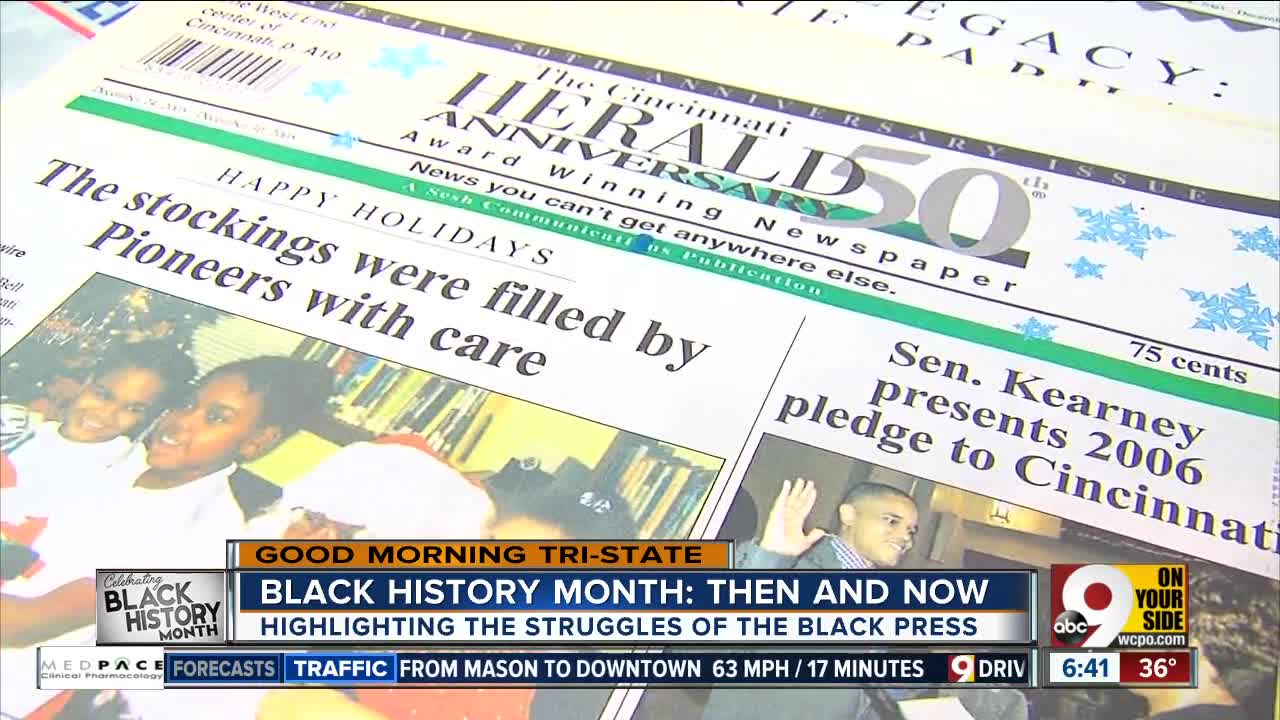 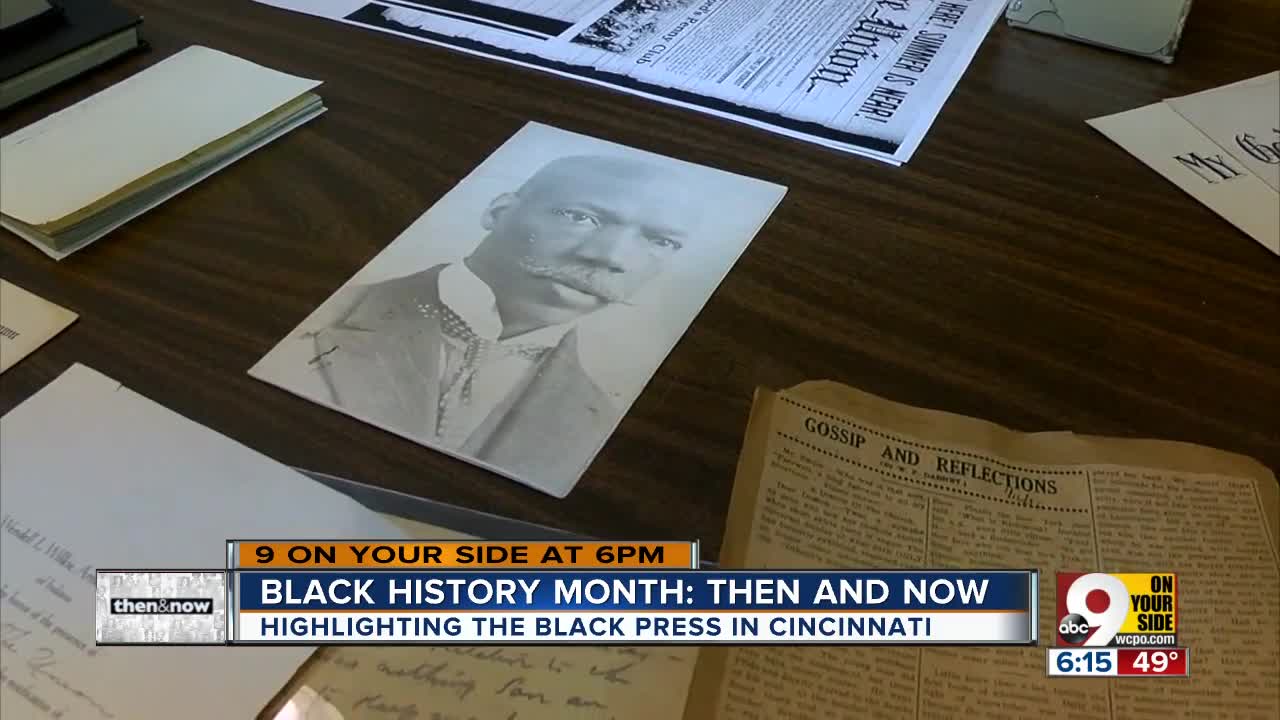 This is the second in a series of four stories. Read the first here, the third here and the fourth here.

CINCINNATI -- The Bill of Rights enshrines freedom of the press in its First Amendment to ensure Americans are free to distribute information and opinions, but even in today’s newsrooms, minority journalists comprise less than one-fifth of the workforce.

Imagine what those figures were before integration and the civil rights movement.

Ninety-nine-year-old Marjorie Parham remembers those days from when her late husband Gerald Porter founded The Cincinnati Herald as the city’s premiere African-American newspaper in 1955.

“It was a one-man staff really for the most part in its early days. He was a very, very hard worker,” Parham said. “It’s given African-Americans a voice. A voice that they otherwise wouldn’t have … Things that might have been smoothed over or overlooked or underreported, we made public.”

That defiance and determination had its forerunner in another black newspaper publisher decades earlier: Wendell Phillips Dabney, whom Scott Gampfer of the Cincinnati Museum Center called one of the most influential people in Cincinnati history.

Gampfer, who serves as director of the museum’s history collections and library, said Dabney started The Ohio Enterprise in 1902 and then published The Union from 1907 to 1952, often as a one-man show.

“Dabney wrote most of the copy for the paper. He wrote the editorial comments. He sold the advertising. He really was the newspaper, and the newspaper was Dabney,” Gampfer said.

Dabney remained critical of treatment of African-Americans and used his paper as a voice of protest for the African-American community in general, according to the Cincinnati History Library and Archives.

He sometimes went to extremes to defend his paper, including keeping a revolver on his desk and sometimes defying death threats.

“He published in the paper his schedule like, ‘Here’s when I leave my house. Here’s the route I walk. Here’s when I arrive at the office,’” Gampfer said. “Basically, Dabney was saying, ‘If you want to get me, here I am.’”

Both Dabney and Porter followed their calling to the end. Dabney died of natural causes, working on The Union until his death in 1952. Porter died while filing one last story for the Herald.

“He had been out, taking pictures of some sort of an affair,” Parham said.

On his way back, he fell asleep at the wheel and hit a guardrail, Parham said. He was taken to Our Lady of Mercy Hospital (now known as Mercy Health-Anderson Hospital).

“And when I got (to the hospital), I was met by a nurse who told me that my husband had been up in X-ray, but if he needed further care, I’d have to move him because they didn’t accept Negro bed patients,” Parham said.

He died of his injuries shortly after the crash, leaving his widow with “a newspaper she did not know how to run and overwhelming debts,” according to the Cincinnati History Library and Archives.

Parham carried on as publisher with the help of her son, Bill Spillers, and a friend with accounting experience, Hartwell Parham, who eventually became her second husband. They published the Herald for several decades until selling it to Sesh Communications in 1996.

Porter’s legacy carries on in The Cincinnati Herald's Avondale office, where publisher Jan-Michele Lemon Kearney has taken the reins.

"People have to be vigilant. We have to keep fighting. We have to keep advocating," Kearney said, adding that she still values advice from Parham, whose photo hangs in the Herald’s office. "She's been really good about helping us stay on course."

While much has changed at the Herald, the staff members still speak up for African-American causes with the hope that everybody can be heard.

“I think the danger is to think there should just be one viewpoint, one leader, one voice. So many people have a lot to say, and we have to work together,” Kearney said.