Bengals vs. Steelers aftermath: NFL players see violence as part of the job 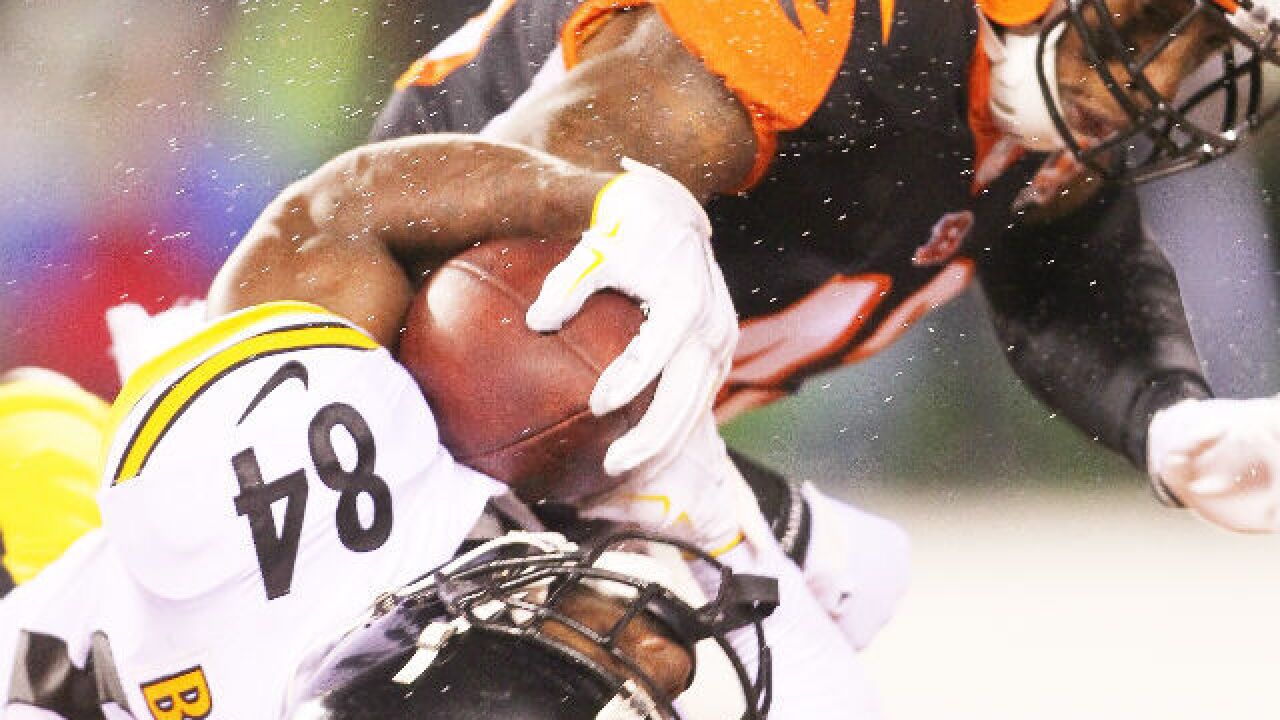 Image copyright 2017 Getty Images. All rights reserved. This material may not be published, broadcast, rewritten, or redistributed.
<p>CINCINNATI, OH - DECEMBER 04: Antonio Brown #84 of the Pittsburgh Steelers catches a touchdown pass as he is hit by George Iloka #43 of the Cincinnati Bengals during the second half at Paul Brown Stadium on December 4, 2017 in Cincinnati, Ohio. (Photo by John Grieshop/Getty Images)</p>

CINCINNATI -- In the aftermath of the Bengals-Steelers barroom brawl, er ... game, a media type posed this question to numerous Bengals:

Do the players need to police themselves to cut down on the brutal hits?

The answers varied, but no one came out and said the players need to change the way they play. So while the media and the ticket-buying, TV-watching public may have been horrified by the violence of Monday’s game, the players clearly accept it as part of their job.

“It’s the game of football,” Bengal defensive end Carlos Dunlap said. “There’s 99.9 percent injury rate in this game. You know what you’re in for. We knew playing football, putting on the helmet, the chances of getting injured are very high. But you want to eliminate the cheap stuff.”

But the truth is a lot of football players don’t see any roughness as unnecessary.

So the NFL can talk about player safety, the NFL can change the rules, but it’s impossible to remove all violence from a violent game -- particularly when illegal plays are rewarded. The most egregious hit of the game was by Steelers receiver JuJu Smith-Schuster on Vontaze Burfict. Burfict missed the rest of the game with a head injury. Smith-Schuster was not ejected.

“We’ve done a lot changes, revisions and so forth on how the game is taught,” coach Marvin Lewis said. “But this is still going to be at the end of the day football.”

Games like Monday’s could be the end of football. Essentially, parents have to allow their kids to play the game for the game to continue to thrive.

If a mom was on the fence about letting a kid play, how do you think Monday’s game will influence her decision?

My take: Football, as a whole, has to come up with a solution. I’d start with no hitting until high school. Play flag football until then. That cuts down on the cumulative effect of concussions. Make the rule of not leading with your head universal and include running backs doing it while carrying the ball. Make penalties for illegal hits much stronger.

Rob Gronkowski dives on Buffalo Bills cornerback Tre'Davious White after a play with intent to hurt him and gets one game? Come on.

But back to Monday.

The scary part was most of the over-the-top stuff happened after Pittsburgh linebacker Ryan Shazier was taken off on a backboard with a spine injury  that had players on the both sides kneeling and praying.

Shazier’s injury didn’t stop Smith-Schuster from laying out Burfict with a blindside hit and then standing over him.

The most shocking thing was Smith-Schuster was not ejected. While the NFL continues to talk of making the game safer, how in the name of Pete Rozelle can a player viciously hit another player illegally, knock him out of the game, celebrate it and be on the field for the next play?

Burfict, of course, has his own history of illegal hits. You think he’ll forget what Smith-Schuster did to him?

“We don’t want to have any of that stuff,” Lewis said. “I don’t think either side wants any of that. We don’t want a player hit with an illegal hit, then stood over. I don’t think anybody wants that - (Mike) Tomlin or myself or the club. We understand that. Both of us have made that clear to the players. That’s not the look we want in the National Football League.”

Bengals safety George Iloka was flagged for unnecessary roughness for a hit on Steelers receiver Antonio Brown later in the game. The players differentiated Smith-Schuster’s hit from Iloka’s.

“What JuJu did was definitely over the line,” Dunlap said. “What George did, he was trying to make a play. He knew a great receiver was trying to catch the ball. He knew the receiver would anticipate him being there, so he was trying to get the ball off him. I don’t think he targeted what he ended up hitting.”

The NFL seemed to agree. Iloka’s suspension was overturned; Smith-Schuster’s was upheld.

“Back in the day, Brian Dawkins was known for getting the ball off receivers when they made great catches,” Dunlap said. “It was acceptable.”

Dunlap is correct in that the regard. The NFL is much less violent than it was in the past. Hits that would be illegal now are celebrated in those old NFL Films. Smith-Schuster’s hit would have been legal at one time.

The difference is players are bigger and faster. In the Smith-Schuster collision with Burfict, you had a 215-pound wide receiver taking out a 255-pound linebacker.

A lot more is known about the effect of concussions long-term.

“I’m not sure that the game is any more physical than it was a while ago," Bengals linebacker Kevin Minter said. “It’s just that now they are calling it more. It’s like everyone was saying -- this rivalry is real. We come for them and they come for us.”

That won’t end because of some scary hits, suspensions and injuries.

“It’s going to be a physical game any time two teams match up that play each other twice a year in any conference,” Dunlap said.

That may sound reckless to you and me, but to players, it’s part of the job.