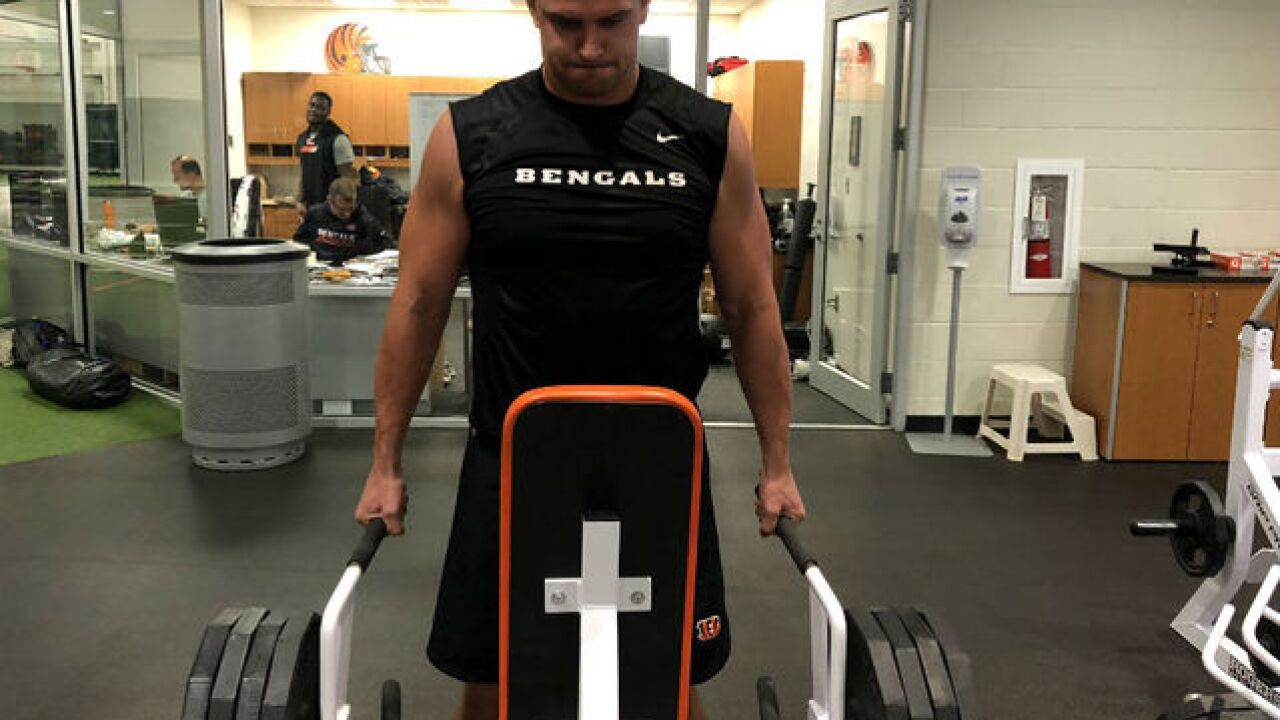 Copyright 2018 Scripps Media, Inc. All rights reserved. This material may not be published, broadcast, rewritten, or redistributed.
<p style="margin:0in 0in 0.0001pt">Cincinnati Bengals rookie defensive end Sam Hubbard dropped his body fat percentage within a month of being with the team. Bengals strength and conditioning coach Chip Morton has been impressed with Hubbard's work ethic and professional approach in the weight room. (Photo by Emily Parker/Cincinnati Bengals)</p>

WCPO's Mike Dyer is giving a behind-the-scenes look at how Cincinnati Bengals rookie Sam Hubbard is adjusting to life in the NFL, both on and off the field. These stories will chronicle how the former Ohio State and Moeller standout is progressing with on-field play, interactions with teammates and coaches and his new day-to-day experience of life as an NFL player.

Yet the Cincinnati Bengals rookie defensive end has not only grown to like the healthfulness of his diet, he has the time to cook at night in his apartment at The Banks.

Fish or lean white meats are often accompanied with brown rice and vegetables for the former Ohio State and Moeller standout. His goal -- like the other rookies -- is to eat every two to four hours during the day.

Hubbard, who turned 23 on June 29, likes to have yogurt shakes and veggie shakes for recovery after practice or later in the afternoon.

"He's already taking an eye for performance-based foods that are going to help him on the field," said Bengals team nutritionist Erin Kratzer.

Hubbard, a third-round draft choice for the Bengals, burns calories quickly, so he's mindful of keeping up his weight. He eats granola bars before he goes to sleep at night.

RELATED: Bengals coach Lewis: Hubbard is 'way ahead of the curve'

During Organized Team Activities (OTAs) and rookie and mandatory minicamps this spring, Hubbard and his 90 teammates took advantage of a variety of healthy breakfast and lunch options at the team dining room inside Paul Brown Stadium.

"That's one of those things I've picked up since leaving college, with diet being so important," Hubbard told WCPO. "Since I've been here, and especially in pre-draft, I'm just trying to pay attention to never eating fried foods and stuff like that. Being smart about what you are taking into your body, because that's really the key from here on out. That's really big to me."

Hubbard, who is listed at 6 feet 5 and 270 pounds, knows better than to eat a large burger the night before a practice. He knows he will pay for it later with his energy level.

"He's become quite the expert," said Jim Hubbard, Sam's father. "He's very focused on the right calories and maintaining muscle mass. His muscle-mass ratio increased dramatically since he left Ohio State because he has learned so much more about what works and what doesn't for him."

Sam Hubbard liked the fact that every day offered something new inside the team dining room four days a week this spring. Daily selections include a particular entree menu to a full salad bar to grilled chicken sandwiches, turkey burgers, stuffed baked potatoes and pizza and flatbreads fresh out of the oven, among other options.

On one particular early June day, Schiferl had a seafood menu that consisted of snapper from the Gulf of Mexico, fresh mussels, mahi-mahi from the Pacific Ocean and crab cakes. All told, there were 90 pounds of protein from that selection.

"We do take care of special requests, but it's not that often to be honest with you," Schiferl said. "I think we have such a wide variety of food here in the cafeteria that all the demands are met. We've gotten great compliments from the players, the administration and the coaching staff."

Feeding the body for longevity

Morton, the Bengals strength and conditioning coach since 2003, said Hubbard is trying to gain weight with more starches, carbohydrates and protein.

"I know Sam has sought out deeper information on how can I feed this body for performance," Morton said. "The goal is to lengthen the career -- whether it's in training, film study or whether it's in eating or sleeping. You want to look down the road. How can I be great now and next year and the year after that and how can I keep this going for as long as I want and perform at a high level?"

Hubbard, who dropped body fat percentage after a month of being with the Bengals, has sought suggestions from Kratzer when he builds his lunch plate.

"He's very into all the other aspects that's going to make him a better football player," Kratzer said. "How he's recovering and how he's eating -- all of the things beyond just football and weightlifting to get him stronger."

Now, Chip Morton is helping the inquisitive Hubbard prepare for his rookie season in the NFL and answering his questions about how to improve in the weight room. The team also can track his exertion during practice through a chip in Hubbard's jersey called the STATSports Apex GPS.

"Coach Morton does an awesome job of recovery and getting your body ready for practice -- warming up and cooling down," Hubbard said. "The nutrition here is awesome."

There is another layer of familiarity, too. Morton went to graduate school in the 1980s with Mickey Marotti, Ohio State's assistant athletic director for football sports performance. Morton is familiar with the foundation that the Buckeyes helped set for Hubbard for weight training.