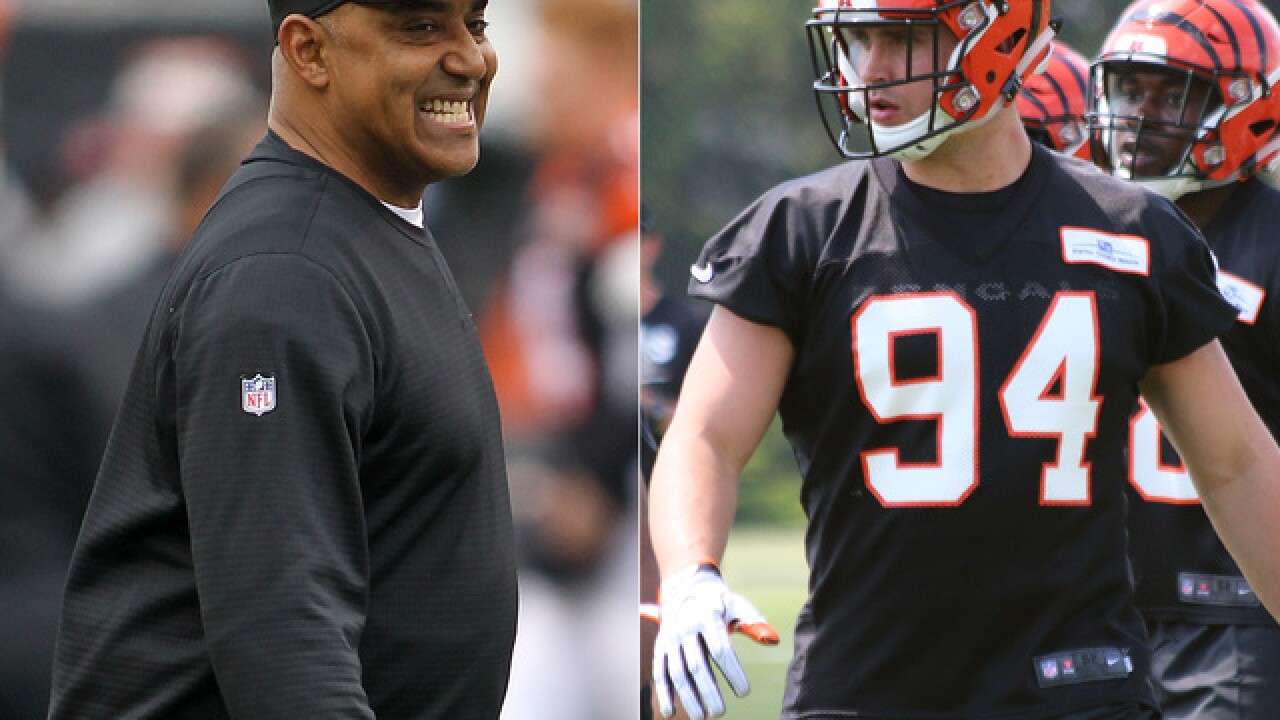 WCPO’s Mike Dyer is giving a behind-the-scenes look at how Cincinnati Bengals rookie Sam Hubbard is adjusting to life in the NFL, both on and off the field. These stories will chronicle how the former Ohio State and Moeller standout is progressing with on-field play, interactions with teammates and coaches and his new day-to-day experience of life as an NFL player.

So it's no surprise how well the Bengals rookie defensive end has learned team fundamentals this spring, from rookie minicamp and Organized Team Activities (OTAs) in May to mandatory minicamp this month.

“He has been way ahead of the curve,” Lewis told WCPO. “We’re just excited about that. He’s going to really complement and add to our football team right away. I’m just excited because he’s probably out here a little mature beyond his years right now.”

Lewis wants to see how Hubbard – like all rookies – makes the transition to pads when training camp opens in late July. From there, Hubbard will have an opportunity in preseason games to show his ability.

“He’ll be part of our rotation in the defensive line group,” Lewis said. “That’s what I see for him looking into the future, very early right away this year. That’s what we were looking for when we picked him.”

RELATED: Who is Sam Hubbard, the Bengals' No. 77 pick?

Hubbard, the former Ohio State and Moeller High School standout, is a lifelong Bengals fan. The third-round draft pick has a great deal of pride walking into the Paul Brown Stadium locker room.

In some ways, being drafted by the Bengals has allowed Hubbard's football journey to come full circle. Lewis and Ohio State coach Urban Meyer have remained friends through the years and Lewis has known about Hubbard for a while.

“It is a unique thing," Lewis said. "We’re blessed to be able to add him. He comes from a quality family. He has that support and that going for him."

Lewis, entering his 16th year as the Bengals coach, chuckles at the notion that he has been the coach for most of Hubbard’s life. (Hubbard will turn 23 on June 29.)

That connection is certainly ironic, yet Sam Hubbard was no stranger to being around NFL players and coaches. During a pro day in Columbus in late March, Hubbard went through some drills in front of NFL personnel, including Lewis. At the time, Hubbard said the experience took his breath away.

Later, he spent a day at PBS prior to the draft. The Bengals knew the type of player and person they would be getting if they were fortunate enough to draft Hubbard.

“The first thing is I think he is a really smart football player," Bengals defensive coordinator Teryl Austin told WCPO. "He’s picked up the things that we are doing technique-wise, scheme-wise, and he’s doing a really good job of applying them. As a coach, I see he is a lot better this week than he was the first week.”

Hubbard has quickly learned being an NFL player is a business. He wants to prove the Bengals made the right choice with the No. 77 pick.

“I feel like I am picking it up pretty fast,” Hubbard said. “After a week spending every day all day with these guys, you get to know them more and more, so having that first week under your belt is definitely a good feeling.”

Lewis said Hubbard’s experience with the Buckeyes has helped with the transition. Ohio State defensive line coach Larry Johnson has a reputation for helping prepare players for the NFL and did just that for Hubbard.

“Defensively they did so many things within their scheme that he comes here and it’s easy for him to learn,” Lewis said. “The word might be a little bit different but he understands the technique, responsibility and so forth that we are trying to teach him here.”

Bengals defensive line coach Jacob Burney says Hubbard has a personality that lays everything on the line on the field. He likes what he has seen from Hubbard this spring.

"He loves the game," Burney said. "He is a student of the game. He has good conditioning. He can handle this. He takes it in stride. He's very coachable and very approachable. He's got a bright future in the NFL."

Austin is confident Hubbard will be the same player or better with pads, and he wants to see how Hubbard will continue to focus on details like improvement in getting off the ball, rushing tackles, creating his signature move, containing the run and his hand placement.

“I like Sam; I really do,” Austin said. “I am excited about Sam and the prospects of the type of player he will be. I think he has a chance to be a really good player – a solid player. One of those guys that you know what you are going to get day in and day out, and when you are trying to call a defense and put a defense together it’s important to know the pieces you have. I think he can be a really solid piece in the years to come.”

“You can definitely tell he pays attention,” Johnson said. “He’s smart, he’s learning, he asks questions and he’s eager. That’s always good when somebody comes in locked in because as a younger player sometimes it can be an adjustment. But he’s doing a good job of integrating into everything.”