Behind the catcher's mask: Cincinnati Reds bullpen catcher calls his job a 'labor of love' 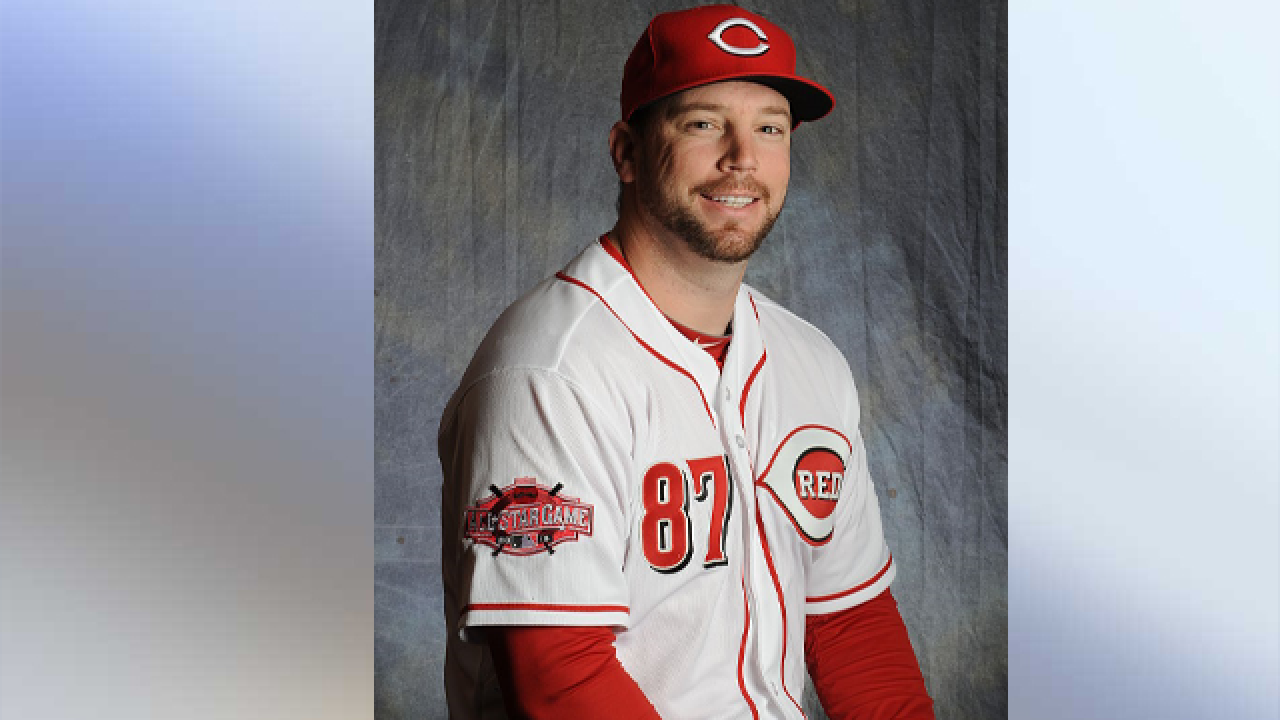 Copyright 2018 Scripps Media, Inc. All rights reserved. This material may not be published, broadcast, rewritten, or redistributed.
<p>GOODYEAR, AZ - FEBRUARY 26: Dustin Hughes #87 of the Cincinnati Reds poses for a portrait during Photo Day on February 26, 2015 at Goodyear Ballpark in Goodyear, Arizona. (Photo by Rich Pilling/Getty Images)</p> 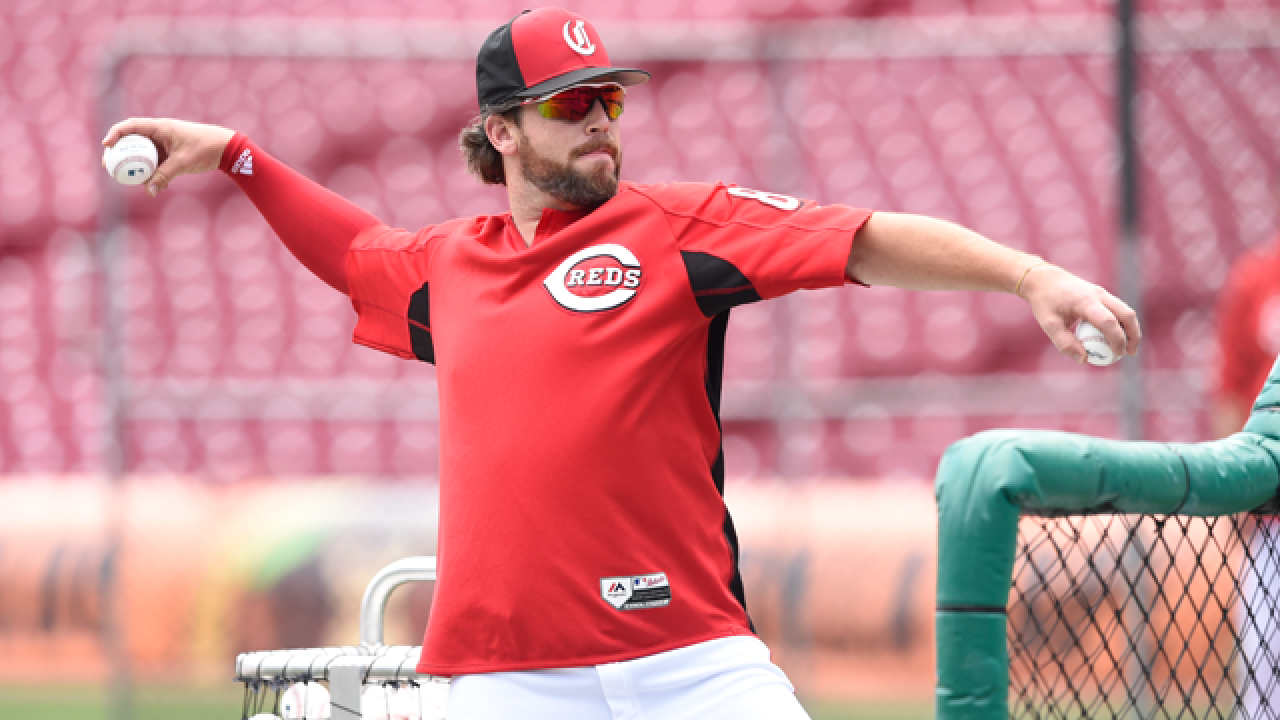 CINCINNATI – It is another hot and humid August afternoon at Great American Ball Park, and Cincinnati Reds bullpen catcher Dustin Hughes is throwing in the outfield four hours before first pitch, like he does on most game days.

In his Reds uniform with No. 87 emblazoned on the sleeve of his warmup jersey, Hughes looks the part with an athletic build and a powerful arm that logs, by his own best estimate, around 500 throws before every game.

On this afternoon, Hughes uncorks throw after throw across the thick, green grass to relief pitcher Michael Lorenzen. Hughes later will throw long toss to at least three other Reds pitchers, then again with that day’s starting pitcher or starting catcher to get them loose. Then he’ll throw a group session of batting practice or take throws in the infield.

“It’s a daily grind for sure,” said Reds catcher Tucker Barnhart. “It’s a daily workout. Most of his work is done in spring training setting up fields and things of that nature and setting up the bullpens. He does a lot of work. We’re thankful to have him.”

Once the game begins, Hughes stands at the ready, prepared to warm up Reds relief pitchers for the most critical points in the game. Hughes will do all of this every game day, at home and on the road, through a grueling 162-game schedule.

“There must be tens of thousands of throws each year on that arm,” said right-handed Reds reliever Jared Hughes. “Not everybody’s arm can hold up to that. But Dustin has a very good arm and he keeps it healthy.”

Bullpen catcher is the lowest-paid coaching position on most major league teams, with an average salary of $90,000, according to a Fangraphs estimate in 2016. You can’t get rich doing it, and by this point in the season, the workload can take its toll. But after 11 years as a bullpen catcher, Dustin Hughes, 35, still strolls into Great American Ball Park at around noon for night games.

“Everything I’ve always done is baseball,” Hughes said. “It’s all I’ve ever known. I love the game. I’ll step away one day, but I don’t want to leave anytime soon. I love what I do. I take a lot of pride in what I do.”

Prior to Friday night’s series opener against the San Francisco Giants, Hughes sat in the home dugout at Great American Ball Park with beads of sweat still dripping from his brow after yet another throwing session and discussed what for him has become a labor of love.

“I still love putting on the gear every day," he said. "I like being around the guys in the bullpen. That’s the great part of it.”

Hughes spent seven years as a bullpen catcher for Triple-A Sacramento in the Oakland A’s’ organization, including a week in 2012 with the big-league club.

During his tenure with the Reds, Hughes’ mitt has taken a pounding from Aroldis Chapman fastballs and dealt with the elusiveness of Raisel Iglesias sliders. In addition to his more physical duties, Hughes also assists Reds catching coordinator Mike Stefanski with advance scouting, mostly focused on pitchers’ times to the plate to aid base-stealers.

Every day from spring training on, from the dreary dampness of April through the sweltering summer, Hughes does his job without adulation and with few accolades, aside from those he regularly receives from his Reds teammates who recognize the value of his role.

“He sees more of my pitches than anybody,” Jared Hughes said. “He catches my flat-ground just about every day, either him or Mike Stefanski, and he’ll catch me warming up for the game. He sees me. He knows how the ball is coming out of my hand better than anyone.”

RELATED: Life in the bullpen: Pressure, anxiety and a little bit of craziness

Coaching is Dustin Hughes’ first love. In 2009 and 2010, Hughes was the freshman baseball coach at San Ramon Valley High School in Danville, California. From 2011 to 2013 he coached the Danville Hoots in the Connie Mack Fall League.

“He’s like a player and obviously like a coach as well,” Barnhart said. “He’s a player-coach. You’ve got to be able to take some trash talk and be able to dish it out. He’s a good guy to have in the clubhouse.”

Hughes briefly had big-league dreams of his own. In June 2002, he was drafted by the Marlins out of high school but did not sign before spending two seasons in the Western Canadian Baseball League. Since 2011, Hughes has worked as a trainer for professional baseball players.

But if there’s an end-game for Hughes career-wise, it’s in coaching.

Hughes, nicknamed “Hoggy,” is said to have one of the best senses of humor on the team with a sharp wit and well-timed puns that are “the most ridiculous ever,” according to Jared Hughes.

“I like to joke around with the guys to keep them loose,” Hughes said, refusing to offer up one of his infamous puns for our interview. “Hopefully for the first five innings I’m not doing anything but watching the game and joking around. That’s the fun part of the game.”

But, when the discussion turns to his family back home in Sacramento, Hughes’ tone becomes more earnest. Like most people who make major league baseball a full-time career, the travel comes with a price, which for Hughes is months without seeing his wife, Alex, 3-year-old son Declan and 11-month-old daughter Finley.

“She’s really sacrificed a lot,” Hughes said of Alex. “She’s pretty much a single mom throughout the season. She’ll bring the kids out here for a few months, then go back home and work at the family bar. I’m very fortunate she comes from a big family. She’s made this whole thing work. She knows how much I love what I do.”

If you want to find Hughes during the offseason, Stingers Sports Pub on La Riviera Drive near Sacramento State University is a good place to start. Alex’s family owns Stingers and she works there full time as a bartender.

Hughes has bartended in the past, but when he helps out at Stingers it’s mostly as a barback.

“I like to do stuff behind the scenes,” said the bullpen catcher.