As hepatitis A cases surge in Greater Cincinnati, food-service operations feel the pain 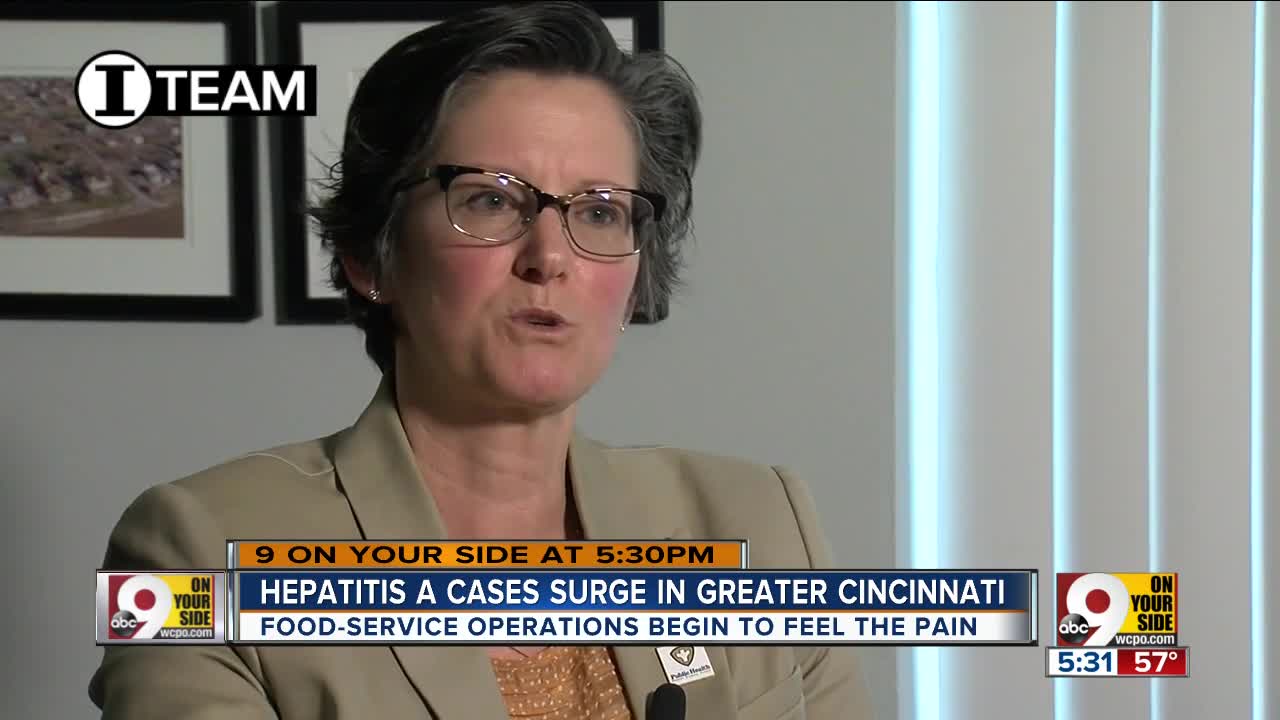 As Greater Cincinnati public health officials have worked to contain the hepatitis A outbreak, the restaurant industry has suffered collateral damage.

CINCINNATI — Greater Cincinnati saw an explosion in the number of hepatitis A cases diagnosed in 2018, when three people died from the infectious liver disease.

As public health officials worked to contain the outbreak, the restaurant industry suffered some collateral damage.

At least nine times since last August, local health departments announced employees had been diagnosed with hepatitis A in places that serve food to the public.

Businesses that were publicly identified told WCPO they lost customers, received angry phone calls and suffered reputational damage that might never be repaired.

Some restaurants paid to have their healthy employees vaccinated against hepatits A. Others benefited from an uneven regulatory approach that allowed at least eight food-service establishments to avoid being named in press releases.

Restaurants with employees diagnosed with Hepatitis A

“The restaurant industry is very concerned,” said Patrick Crowley, a public relations consultant who has advised three restaurant operators on the crisis. “Restaurants don’t want employees that are infected and dealing with food or customers. That’s the main concern, to make sure they’re providing a healthy atmosphere for their guests and employees.”

Crowley, a partner in Strategic Advisers LLC, thinks restaurants can survive the ignominy of being linked to hepatits A if they quickly communicate how they’re handling the problem.

“If you show people that you care and you’re taking steps to make sure it doesn’t happen again, then I think you’re going to be OK,” he said.

‘All it did was cost us business'

Try telling that to a business owner branded with the Scarlet H.

Felicity IGA was named in a Nov. 15 Clermont County Public Health press release. It advised “anyone who has eaten food from the deli” between Oct. 31 and Nov. 13 to “monitor for symptoms” including jaundice, nausea and clay-colored stools.

The press released noted “the risk to patrons is extremely low” and the store was working with the health department “to vaccinate their other employees.”

But that didn’t keep IGA customers from threatening lawsuits and calling for a boycott of the store on Facebook. Some customers even blamed the store when the health department ran out of vaccine in a Nov. 16 event at the Felicity Fire Department, said Rose Reifenberger, the store's owner.

“People felt like we had a part in this,” Reifenberger said. “That was the part that bothered me the most, as though there was something we did to cause this.”

Hepatitis A diagnoses in the Tri-State

Her business is battling a proposed class-action lawsuit in which newlyweds Jeff and Kameron Slavey allege their guests were exposed to “fear, stress and trauma” when the Northern Kentucky Health Department alerted them that a Newport Syndicate employee was diagnosed with hepatitis A.

Campbell County Judge Julie Reinhardt Ward has scheduled a March 15 hearing on a motion to dismiss the case. Attorneys for the Syndicate argue the Slaveys offer no evidence that anyone got sick or was exposed to the virus. They also argue “mere exposure to an illness is not a recognized or compensable injury in Kentucky.”

In a statement to WCPO, Forton said the Syndicate did everything it could to manage the crisis.

“While this employee’s primary work duty was washing dishes, we nevertheless took immediate action to address any potential health risk to our guests and other employees," the statement reads. "Our entire building was sanitized, and the very next day, with Health Department approval, we hosted a breakfast.”

In an interview with WCPO, Forton questioned what was gained by making her employee’s illness a public matter.

Even restaurants that avoided the media spotlight discovered there was a higher cost of doing business in the hepatitis A outbreak of 2018.

Ed Clemons spent several hundred dollars to make sure all of his employees were vaccinated at Edwardo’s Pizza & Subs in Williamstown after an employee there was diagnosed with hepatitis A.

Frisch’s Restaurants Inc. paid to have employees vaccinated in Franklin and Middletown after it was notified about employees with hepatitis A, said Warren County Health Commissioner Duane Stansbury. Frisch’s declined to answer questions about the exposures but released a statement saying it “took all measures requested by the health department.”

The Waffle House hasn’t had any employees diagnosed with hepatitis A in the Cincinnati area, but it paid to have all of its local employees vaccinated as part of a national effort to avoid illness in areas with high diagnosis rates.

“It continues to escalate," said Larry Sigler, director of food safety for the Atlanta-based chain. “This is one that’s very concerning because of the possibility of it spreading to our customers and associates and that’s why we’ve been proactive.”

Coping with hepatitis A in the workplace has been difficult enough. But food-service establishments also found local health departments had different approaches to the problem.

Health departments in Kentucky are advising everyone to be vaccinated against hepatitis A, for example. Ohio departments generally recommend it for higher-risk groups only, including illicit drug users, jail inmates, men who have sex with men and people experiencing homelessness.

Three health departments in Butler and Warren counties investigated more than half a dozen cases involving food-service workers with hepatitis A, but no press releases were issued about their employers. Clermont Public Health had four cases, issuing press releases on all of them. In Northern Kentucky, seven food-service operations had employees diagnosed with hepatitis A in 2018. The Northern Kentucky Health Department issued news releases about three of them.

Officials in Northern Kentucky decide whether to issue a release based on investigations they conduct after a doctor, clinic or hospital reports a case of hepatitis A, said Steve Divine, the department’s director of environmental health and safety.

“We talk to the patient, management and co-workers to determine what their job duties were during this time they could have been ill,” Divine said. “Hepatitis A can be communicable even two weeks prior to developing symptoms.”

Health inspectors work to figure out whether infected employees came into contact with food that was served to customers as well as whether they might have infected co-workers, he said.

Hepatitis A symptoms and at-risk populations

Someone who handles food before it gets cooked at a high temperature, for example, has a lower risk of passing on the virus to customers than someone who prepares ready-to-eat sandwiches, he said.

“What we’re really looking at is trying to get the big picture as well as details,” Divine said.

Clermont County recently revised its policy of issuing press releases in every case where a food-service employee is diagnosed. But Health Commissioner Julianne Nesbit makes no apologies about earlier announcements.

“Our goal is to protect the public, to make them aware of what’s going on,” Nesbit said. “Every single one of those restaurants I would go and eat in them today. It is no reflection upon the restaurant simply because they had an individual ill with hepatitis A.”

The sudden severity of the outbreak might be one reason local departments leaned toward more disclosure. The Centers for Disease Control is tracking outbreaks in 17 states with Kentucky, West Virginia and Ohio leading the nation in total cases and hospitalizations from hepatitis A.

This outbreak is more severe than previously seen with hepatitis A, resulting in more deaths and hospitalizations, said Dr. Carl Fichtenbaum, a professor at the University of Cincinnati College of Medicine who specializes in infectious disease. Although there have been no local cases linked to restaurant workers, Fichtenbaum said he thinks it is reasonable for health officials to publicize restaurant-employee infections.

“I respect the fact that it’s not very good for those restaurants,” he said. “I think you have to look at the greater good and how can we stop this epidemic. I think there are two ways that we really need to do this, which is to communicate and educate the community and let them be aware of the threat. And then to increase our vaccination in particular of groups that have the highest risk.”

Dan Monk is a business reporter for WCPO. To reach Dan, email daniel.monk@wcpo.com. Follow him on Twitter @DanMonk9.