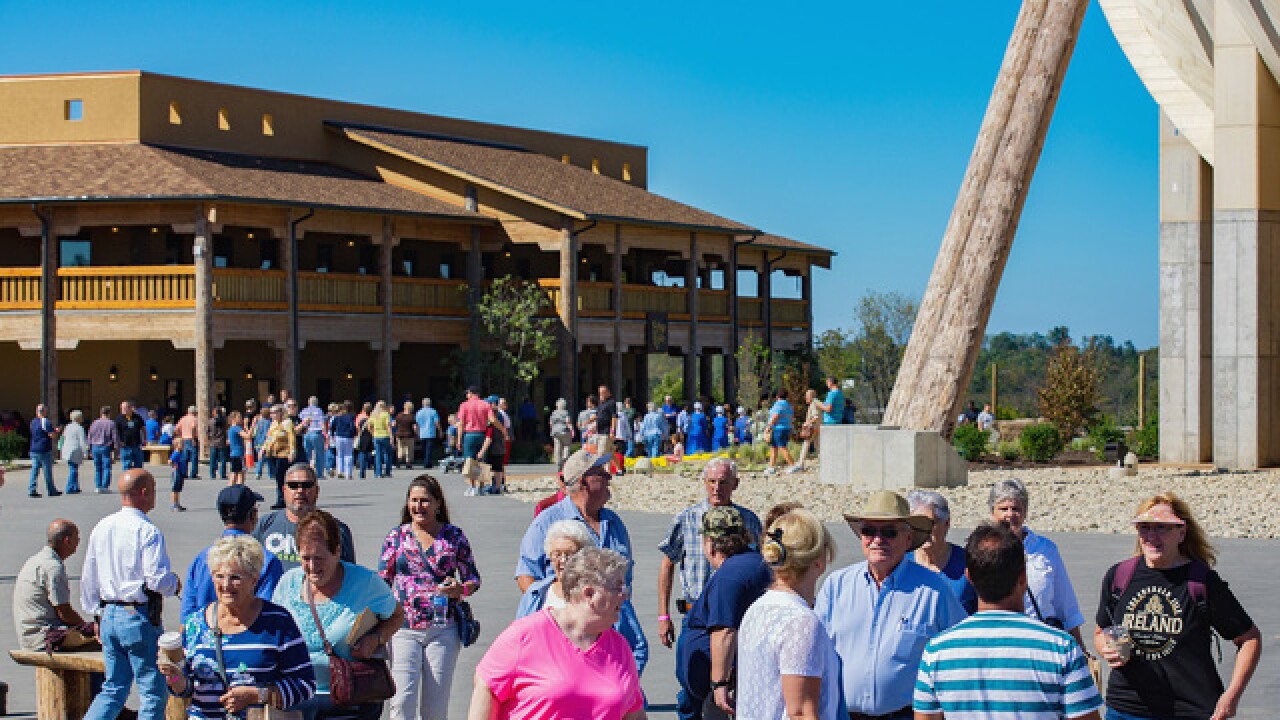 Copyright 2017 Scripps Media, Inc. All rights reserved. This material may not be published, broadcast, rewritten, or redistributed.
Maria Murphy
<p>Since its July 7, 2016, opening, up to 8,000 people a day visited the Ark Encounter near Dry Ridge, Kentucky. It's one of two Northern Kentucky attractions operated by Answers in Genesis. (Photo provided)</p>

The opening of a Bible-themed park, new shopping options and continued growth in amenities gave a bump to tourism numbers in Northern Kentucky for 2016.

Five new hotels, the opening of Riverfront Commons and the growth of locally distilled bourbon are expected to keep tourists coming this year. Newport's SkyWheel, if it opens as backers hope in late 2017, could boost numbers at the end of the year.

In 2016, a year with a losing Reds team and no special draw like 2015's All-Star Game, visitors spent $23 million more in Boone, Kenton and Campbell counties than in 2015, taking the total to $388 million, according to a report by the Northern Kentucky Convention and Visitors Bureau. The total economic impact was estimated at $1.7 billion.

Eric Summe, the bureau's president and chief executive, gave the Ark Encounter the biggest credit for drawing new tourists with its giant model of Noah's ark, zoo and zip lines. The Ark opened July 7 in Grant County and instantly attracted crowds from across the country.

That, along with an expanded Creation Museum in Petersburg, boosted hotel occupancy across Northern Kentucky, Summe said. Florence is the closest city to both attractions with major hotels and restaurants.

Looy said the museums' philosophy is to continue to do something significant every year to bring visitors back. This year, the Creation Museum is scheduled add a new exhibit on Memorial Day weekend, and the Ark Encounter will open villages outside the main attraction with food and entertainment.

Looy said 95 percent of visitors are coming from outside Kentucky, Ohio and Indiana. While they're visiting the Biblical theme park, they're also visiting other sites in the region, like Newport Aquarium, and taking rides on riverboats and shopping in the area.

The only thing that prevented more tourists from visiting was a lack of hotel rooms, Looy said.

There's already been a boost: Three hotels have opened since December: Hotel Covington in Covington and Aloft Newport on the Levee and Hampton Inn & Suites, both in Newport. They'll be joined this summer by two hotels under construction in Florence, Hilton Home 2 Suites and Comfort Inn Suites, said Joshua Hunt, director of business and community development in Florence. Those two will add 109 and 82 rooms respectively.

Hunt said two more hotel groups also are looking at land in Florence. He hopes those projects will be announced this summer.

Florence, however, said it's not just the Ark Encounter bringing in visitors. Hunt says the city's location near the airport, its shopping and restaurant amenities and short distance to downtown Cincinnati all contribute.

"You're seeing more interest in the destination," said Summe of Boone, Kenton and Campbell counties. He noted improvements in Covington streetscapes, increased walkability and access to downtown Cincinnati. Work in Newport this spring on the Riverfront Commons pedestrian and cycling path will connect Dayton, Ky., to Ludlow, while SouthBank Partners plans to update and repaint the Purple People Bridge. Both additions will add to the draw.

Summe said Boone, Kenton and Campbell counties in 2015 brought in one-fifth of the state's tourism dollars.

In 2016, the Northern Kentucky Convention Center in Covington hosted 143 conventions with 27,850 attendees. They're on track for booking conventions eight years out, Summe said, but additional space will soon be needed. One option for expansion is the adjacent site of now-empty IRS building. "It's certainly within the realm of consideration for expansion for us," said Summe.

Expanding the convention center is an important target for convention and visitors bureau to keep pace with the region, said the bureau's chairman, Jack Brandt, general manager of the Marriott Kingsgate Hotel.

A big focus of the bureau is continuing to be a "strong promoter and advocate for an expansion of our regional convention center," said Brandt. "Our center is undersized, and we are becoming non-competitive in the marketplace."

It's working together, with all of the destination spots in Northern Kentucky as well as Cincinnati, that makes it all work, Summe said.

"We understand the value of regionalism," Summe said. "It makes us a stronger destination."