Analyst: Convergys Corp. may be selling at the wrong time

Bidders reduced offers after due diligence 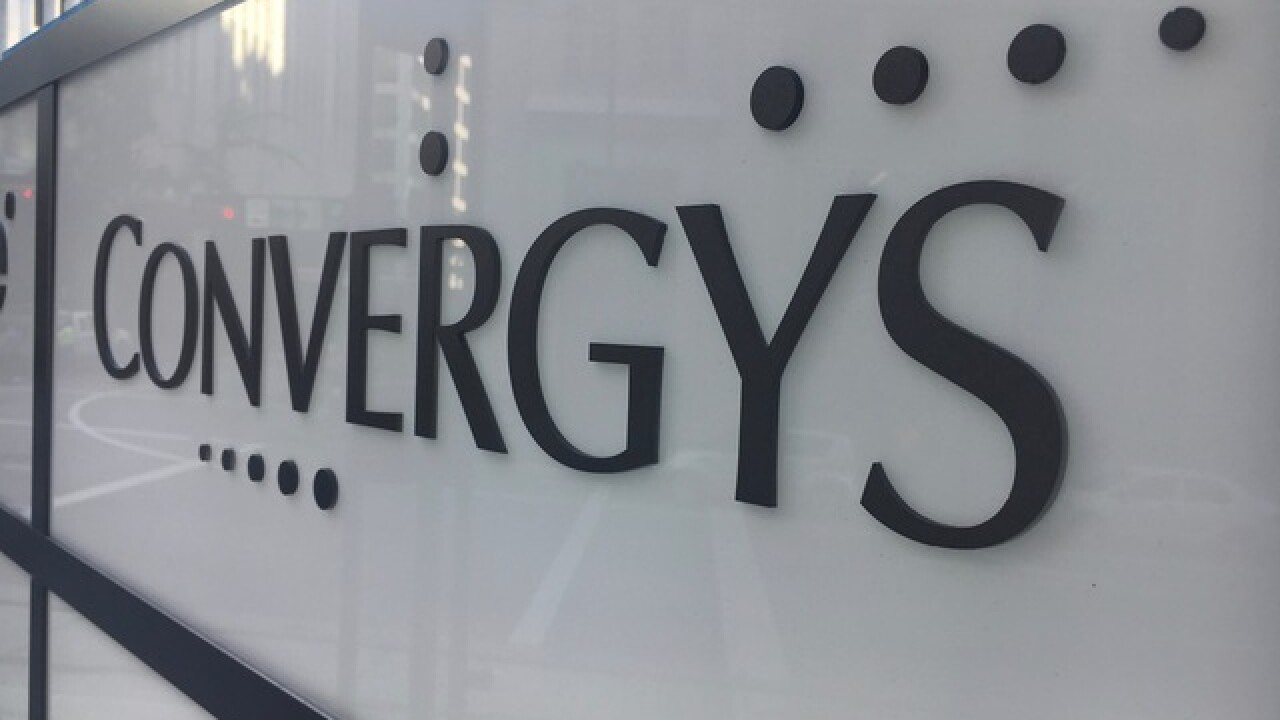 CORRECTION: Concentrix President Christopher Caldwell was incorrectly identified in a prior version of this report.

CINCINNATI -- It isn’t every day you can win an auction by lowering your bid. But Synnex Corp. did exactly that on its way to a merger agreement with Cincinnati-based Convergys Corp.

Shareholders from both companies will vote Oct. 3 on the proposed $2.8 billion transaction, which would combine Convergys with the call-center operations of Synnex subsidiary Concentrix. The companies need yes votes from 50 percent of Synnex shares and 75 percent of Convergys for the merger to happen.

If the deal goes through as planned, Convergys would be the third-largest of a dozen publicly traded companies to be sold or relocate its headquarters away from Cincinnati since 2014. About a thousand local jobs would be more vulnerable to downsizing, as Synnex is planning to trim $150 million from the combined annual budgets of both companies.

The sale could also have subtle impacts on the local economy. Since its 1999 spinoff from Cincinnati Bell Inc., Convergys has been an important contributor to local charities and served as a regional talent feeder. Its former executives have claimed high-ranking positions at the Cincinnati USA Regional Chamber, Cincinnati Children’s Hospital Medical Center and WCPO’s parent company, E.W. Scripps Co.

In other words, the deal is important enough for local shareholders to scrutinize the details.

In an Aug. 28 securities filing, Convergys explains how Synnex defeated three other contenders with a cash and stock offer worth $26.50 per share. That’s higher than the stock has traded since November 2016. But it’s lower than Convergys might have expected when the bidding began in mid-April. In fact, Convergys received bids of up to $29.50 in the first round of its auction process. And its financial consultant, Centerview, prepared various estimates showing a price of up to $30.25 could be justified.

'Nobody liked the deal'

Synnex offered $26.50 in mid-April, then boosted its bid to $27.25 a month later. But as Centerview pushed the company to go higher, Synnex withdrew its higher bid “based on concerns regarding Convergys’ 2018 financial forecast.”

Synnex wasn’t the only bidder to go lower. An unidentified company that opened with a first round bid of up to $29.50 later reduced its cash offer to between $24.50 and $26.50. It cited “concerns regarding recent industry trends … and the financial outlook of Convergys.”

In the end, consultants for both Convergys and Synnex proclaimed the $26.50 transaction fair to shareholders of both companies.

“Convergys shareholders will receive an immediate premium for their investment as well as the opportunity to participate in the significant upside potential of the combined entity,” said Convergys spokeswoman Krista Boyle. “Convergys clients will be even better served by the combined organization’s increased scale, strong talent, best-in-class analytics, technology, and digital offerings.”

Activist investor Elliott Management Corp. has endorsed the deal as one that will create “substantial shareholder value.” Convergys' Aug. 28 filing said Elliott offered feedback during the auction process and signed a confidentiality agreement to receive “high-level updates” on the sale process.

"The Convergys board has secured a strong outcome for shareholders, made possible by years of hard work from Ayers and her team. The combination with Synnex will deliver significant accretion, cost benefits and strategic advantages," said Jesse Cohn, a partner for the hedge fund in a statement released to Reuters June 28. Elliott did not respond to WCPO questions about the deal.

But at least one analyst thinks Convergys could have done better.

“When the deal was announced both stocks went down,” said Vince Colichio with Barrington Research. “That means nobody liked the deal.”

Colichio said Convergys is selling at the wrong time, when cuts in the telecom industry have caused revenue to decline in 12 of the last 13 quarters.

The $2.8 billion purchase price is roughly the same as Convergys’ annual revenue, Colichio said, while other buyers in the sector paid up to 1.3 times revenue to acquire call-center companies. Colichio thinks Convergys might achieve that level if it sold after restoring revenue growth.

Colichio said bad acquisitions and strategic errors made Convergys too reliant on telecom clients. And that forced Convergys to consider sale offers at a time when it had little leverage to demand a premium price.

“Where they slipped in terms of execution is not diversifying away from telecom in general and not fast enough,” Colichio said. “You don’t want to be too highly exposed to anything in this business. It’s not a high-margin business. You can really get in trouble.”

Revenue concentration isn’t a new problem for Convergys. For most of its 20-year history as a public company, telecom providers generated the bulk of its revenue

Concentrix President Christopher Caldwell told analysts Convergys is well aware of the problem and is taking steps to correct it.

“The decline in customers is very, very targeted to the telco segmentation,” Caldwell told analysts in a June 28 conference call about the Convergys acquisition. “The Convergys team has done very good job in sort of growing other business. They just haven't been able to outrun some of the decline within the telecom sector.”

Convergys won new business worth more than $115 million in the first three months of this year by targeting technology and health-care customers. And it invested nearly $1 billion in acquisitions since 2014, with revenue diversification in mind.

“It should also be noted that the communications industry is where the majority of call volume occurs (for all call-center companies) and in many ways our historic revenue make-up is a result of this dynamic,” Boyle said.

But Colichio argues the acquisitions of Stream Global Services and the German call-center operator, The buw Group, “weren’t the growth drivers they needed” at Convergys.

Colichio points to Sykes Enterprises Inc. as a Convergys rival that’s making the right strategic moves. Although both claim AT&T as their biggest customers, Sykes got about a third of its 2017 revenue from telecom clients, compared to 45 percent for Convergys.

“The acquisitions they did were made not to get bigger but to improve their value-adds,” he said. “They bought a company that generates sales leads. That’s a different business, but it is fast-growing and high margin.”

The CEO and founder of Sykes Enterprises said his company submitted a bid for Convergys, but he considered the deal too risky to offer a premium price.

“It would have been a big financial synergy play,” CEO Charlie Sykes told analysts in an Aug. 6 earnings call. “It wasn't necessarily something that we felt from a long-term strategic value play made a big impact.”

As an Ohio corporation, Convergys is not required to seek the highest price in an auction, said Mark Reuter, a partner in the business reputation and transactions group at the Keating Muething & Klekamp law firm downtown. Most public companies are chartered in Delaware, where court rulings have established that once an auction starts the company must go to the highest bidder. But Ohio courts have rejected that notion for corporate boards in the Buckeye State.