'How could they murder this messenger of love?' 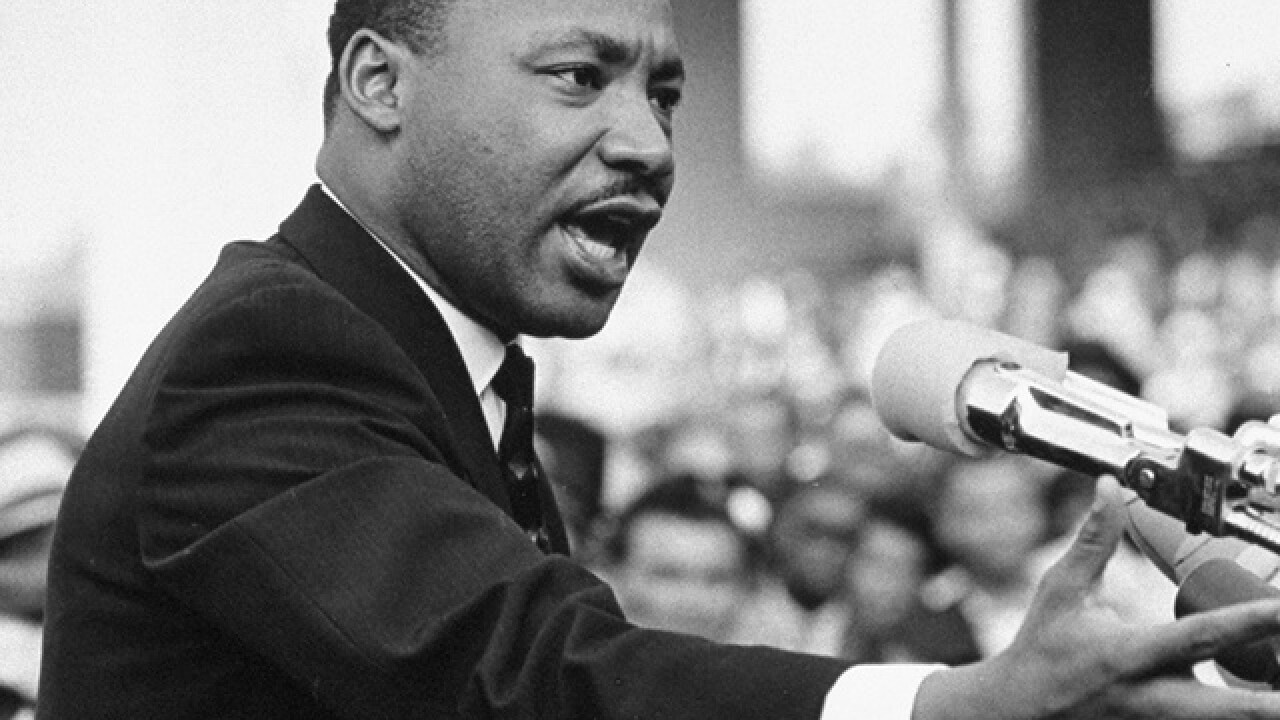 CINCINNATI -- Hamilton County Municipal Court Judge Ted N. Berry remembers exactly where he was when he heard that the Rev. Martin Luther King, Jr., was dead.

He and his father, Theodore M. Berry, were watching a movie in Washington, D.C., when the theater stopped the film and announced the news. Everyone left the theater in the middle of the movie, he said, and by the time he and his dad got home, they could see gray smoke across town.

“Northwest Washington was literally going up in smoke, people hitting the streets in anger and hurt and frustration,” Berry recalled. “How could they murder this messenger of love and tolerance?”

To commemorate King’s assassination 50 years ago today, WCPO talked to some Cincinnati residents about the impact that his work, his death and his legacy have had on their lives. These are their stories.

For Berry, King’s death was personal.

He first met the revered civil rights leader in 1959, when Berry was just 4 years old.

Local civil rights icons the Rev. Fred Shuttlesworth and the Rev. L.V. Booth had invited King to speak at a voter registration event sponsored by a group supporting his father’s return to Cincinnati City Council that called itself the “Berry Backers.” Berry’s mom cooked a big southern dinner at their home after the event.

“I can remember their crisp, starched, white shirts and their narrow ties,” Berry said. “All I can remember him saying is complimenting my mother on her southern cooking. He said, ‘Johnnie Mae, you sure do make some mean greens.’”

The Berry family was living in Washington, D.C., by 1968. They moved there from Cincinnati after President Lyndon Johnson appointed Berry’s father to head the Office of Economic Opportunity’s Community Action Programs.

Having that personal history with King made his death all the more devastating for the whole family, he said.

“We were shocked,” he said. “We knew that he had lots of death threats. We knew that his planes had to be bomb-proofed. We knew death was a possibility. But still when the news came, we were all devastated.”

King’s life and legacy have continued to guide Berry, just as his parents’ example of public service has guided him.

“I just try to be a beacon of light to those that are less fortunate than I am, who have been born into very tough, dire circumstances and provide equal opportunity to the poor and the powerless,” he said.

Ericka King-Betts is too young to remember King’s life and death. But his work has impacted her so profoundly that she has been involved in the MLK Coalition of Cincinnati for more than 10 years.

Founded in 1978, the MLK Coalition has planned annual commemorative programs for more than 30 years and has organized an event April 7 to mark the 50th anniversary of King’s assassination. King-Betts serves as the group’s vice president.

“As an African-American female, I will forever pay homage to Dr. King and everything that he has meant for me and my family in the fight for civil rights,” she said.

The coalition’s event, called “50 Years After Dr. King’s Assassination: Cincinnati Remembers,” will include a panel discussion to address the questions: “Where are we now? Where do we go from here?” There will be activities for children, too.

King-Betts said she expects as many as 500 people to attend, but the venue at New Prospect Baptist Church on Summit Road has room for plenty more.

The goal of the event is to make sure that people learn more about what King stood for and fought for, she said, and to understand that his legacy continues all these years after.

“I’ve heard many stories from them regarding the Civil Rights Movement and the march across the Edmund Pettis Bridge,” she said. “It was instilled in me pretty early on why those things are important.”

Now King-Betts said she and her husband work to instill those same values in their sons.

A lot of people don’t realize that King stood up for all marginalized people, not just black people, she said, and that he wanted everyone to be able to live in a world without prejudice.

Assia Johnson is a member of the MLK Coalition, too. She is only 33, but she has been hearing about the Civil Rights Movement her whole life.

Her father, Oscar Johnson, is from Greensboro, N.C., and took part in civil rights protests there as a young man. Johnson grew up in Columbus living in a house with her parents and grandparents so she heard a lot about their experiences, she said.

“Not only did I learn in class about the Civil Rights Movement and black history, but I got all that supplementary knowledge that I wouldn’t have gotten in class because they participated and because they lived it,” she said.

Her earliest memory of learning anything about King dates back to preschool.

Johnson said she remembers watching a black history documentary on public television that talked about various leaders in the Civil Rights Movement, and King was part of the show.

“You’re kind of mesmerized by his presence. It was inspiring from the get-go,” she said. “He always had this way of connecting with you and making you feel empowered even though you’re going against all the odds. Just seeing that and hearing that made me pull on my parent’s sleeves like, ‘Hey -- tell me more about this guy.’”

When Johnson was in high school, a lot of her friends were going to Johnny Rockets and other restaurants with lunch counters and soda fountains. Her grandmother explained that places like that didn’t bring up good memories for her.

“She told me going to Johnny Rockets just reminds me of segregation,” she said. “It kind of brought up the reason for why nostalgia is different for people.”

Johnson tried to learn bravery from her parents, her grandparents and King.

“I’d like to say that I live without fear, but I don’t know if that’s true,” she said. “The legacy that they’ve left is that you’ll always be afraid. But do something with that fear. Face that fear. Challenge that fear.”

As Johnson does that through her work with the MLK Coalition, she said she keeps in mind this quote from King: “If you can’t fly then run, if you can’t run then walk, if you can’t walk then crawl, but whatever you do you have to keep moving forward.”

Those words, she said, tell her that she’s not alone, that God is with her, that the people who came before her paved the way and that she must contribute whatever she can to making the world a more just place for everyone.

Ozie Davis was a toddler living with his family in Avondale 50 years ago.

He doesn’t remember the riots that broke out in his community in the wake of King’s assassination.

But he heard plenty of stories about it from his older brothers and sisters.

“They talked about the Black Panthers being on Reading Road and how the Black Panther Party was organizing the neighborhood,” Davis said. “I don’t remember a lot about what happened other than stories about just how impactful Dr. King’s murder was throughout the whole country.”

Davis said he remembers his elementary school principal in Avondale talking about the important role that King and local civil rights icons played in the community.

He remembers being a student at Walnut Hills High School and having black teachers there who stressed certain life lessons.

“The black teachers were very strong in saying that you guys have a responsibility and accountability to your blackness,” he said. “We have to excel because so many people fought for us to be there.”

The frustration, though, is that Cincinnati and the nation are not there yet, Davis said.

The Greater Cincinnati Urban League and Urban League of Greater Southwestern Ohio published the State of Black Cincinnati report in 2015 that showed how divided the community remains.

“In a lot of ways, the tale of two cities that the Urban League’s report talks about is continually shown in everything that goes on,” Davis said. “And it’s sometimes unfortunate that we still have yet to really see equality here in this country.”

Still, Davis said, he continues to have hope. The Greater Cincinnati Foundation is focused on addressing inequality, he noted. And the Child Poverty Collaborative and United Way of Greater Cincinnati are focusing their efforts on helping families across the region lift themselves out of poverty.

For Marian Spencer, King’s death was nearly half a lifetime ago.

Now 97, Spencer said she cannot remember exactly how she heard about the assassination, but she can still remember how she felt about it.

“It was amazing to all of us,” she said. “I don’t think we were ready for it or we accepted it really.”

Years before King’s death, Spencer was making her own mark on civil rights here in Cincinnati.

Her 1952 lawsuit resulted in the desegregation of Coney Island in Cincinnati. She was the first black woman to win a seat on Cincinnati City Council and served as the city’s vice mayor for a time.

She was devastated by King’s death, she said.

“We knew that he was fighting for all our rights,” she said. “I don’t think he said it as just black American. He saw it as necessary for all Americans. We needed to change the way we thought about things in those days.”

All these years later, she said, the struggle is far from over.

“We have to keep fighting and keep on our toes so we don’t go backwards instead of moving forward,” she said. “It’s easy to slip into negative things, and it’s harder to fight for the positive things.”

Or as King put it in a 1960 speech to the National Urban League:

“Injustice anywhere is a threat to justice everywhere. Therefore, no American can afford to be apathetic about the problem of racial justice. It is a problem that meets every man at his front door.”

You can learn more about the MLK Coalition’s April 7 event and register for it online.