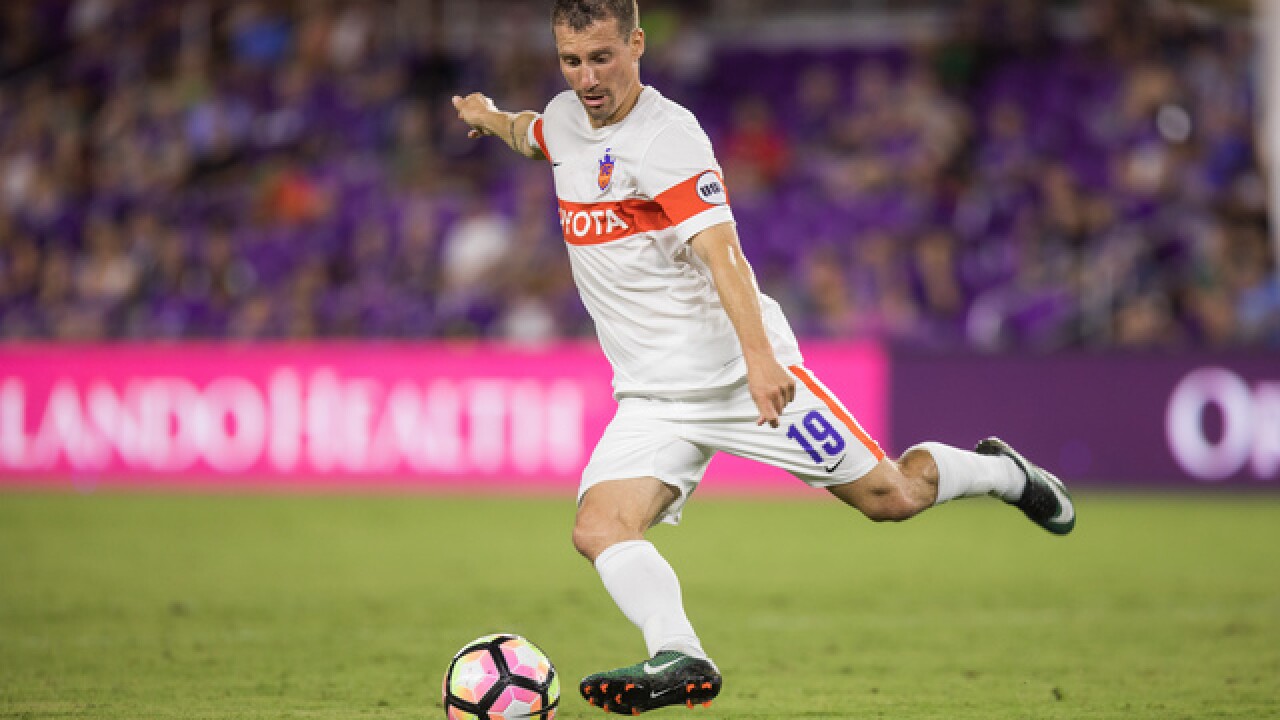 The player FC Cincinnati has nicknamed "Magic" showed once again why he's so clutch.

After Bone's goal broke a 1-1 tie that had held up since the first half, Emery Welshman added some insurance, finishing off a hat trick with goals in the 99th and 110th minutes.

RELATED:  Magical Corben Bone is the guy FC Cincinnati wants on the field -- all the time

"In Cup soccer, it really doesn't matter how you win as long as you win," FCC coach Alan Koch said. "The result is obviously a positive result, and that's what we asked the guys to go out and get. We knew it would be tough, that it wasn't going to be an easy game and it certainly wasn't an easy game. I'm proud of our guys for staying patient, not really getting too rattled. We showed our class in extra time."

The "darlings of the U.S. Open Cup," as ESPN called FCC in a recent Major League Soccer broadcast, advance to meet Pittsburgh Riverhounds SC on the road May 23. The Riverhounds beat Erie Commodores FC 2-1 on Wednesday.

The Bailey made itself at home at Gettler. pic.twitter.com/TbwJs0R4tc

Here is an analysis of the game:

Game changers: Bone entered the game in the 67th minute to replace Nazmi Albadawi, and FCC suddenly seemed to have new life.

The fresh legs helped as FCC tried to push forward more late in the game to get a goal and prevent extra time. Bone brought some energy to the offense and seemed to find chances right away. "Magic" finally relieved the tension when he took a cross from Welshman and buried it to put FCC up 2-1 less than four minutes into the first 15-minute period of extra time. After that, the goals seemed to come easily.

"As a sub, I just try to bring energy as best I can, so I tried to do that and tried to lift the team a little because that energy can be infectious," Bone said. "Thankfully, those guys were working crazy hard. Emery was working crazy hard. Even on my goal, he did all the work, got the ball and found me in the box and thankfully I finished it, but that's what you do as a sub. You come out and bring energy and try to raise the team's level to win the game, and thankfully we did that."

FCC also benefited from using its third sub on Blake Smith to replace Lance Laing, who saw plenty of action at left back and twice had to be checked out for injuries. Smith played aggressively and inserted himself into the offense, and Koch credited him for the team's improved performance in extra time.

The Orange and Blue had played more direct in the first half but began working the ball around better as the game went along. They finished with 63.3 percent of the possession time and Detroit goalie Nate Steinwascher had 10 saves.

Dangerous counters: Detroit's best chances came on counter attacks, and that was how they took the first lead. After intercepting a pass, Detroit quickly moved into FCC's defensive third and Danny Deakin fed a pass into the middle of the box to set up Shawn Lawson's goal in the 31st minute. Lawson cut inside to beat Laing and Michael Lahoud, then slid the ball past goalkeeper Evan Newton when he came off his line to try to make a play.

The lead only held up for four minutes, but Detroit challenged numerous times in regulation when in transition and the deeper into the second half it went, the chances seemed more threatening.

Survive and advance: Even the early-round Cup games aren't givemes for the higher division teams, and with FCC using a mixed lineup that included some regular starters and some who haven't played as much, it isn't unexpected to see this game go to extra time. FCC needed extra time in this same round last year to advance, beating fourth-division AFC Cleveland 1-0.

The next round will be just as tough, as United Soccer League foe Pittsburgh hasn't conceded a goal at home yet this season.

"All these games are hard," Bone said. "Every Open Cup game I've ever played in has been hard, no matter the opponent. Last year we played a (lower division) team and went into overtime, same thing. All these games are hard, and you've got to take it seriously, but at the end of the day, it's survive and advance, and that's what we did."

Emery Welshman: Welshman was the man of the match after tallying the first hat trick of his professional career and setting up Bone for his goal. The first one came in the 35th minute on a header from six yards out to the near post after Forrest Lasso headed a cross from Daniel Haber over to him. The second one came in the 99th minute after Russell Cicerone dribbled almost three-fourths the length of the field and had his shot blocked, which Welshman rebounded and smashed home. He completed his night off an assist from Jimmy McLaughlin.

Daniel Haber: In his third start of the season, Haber provided decent service throughout his 60 minutes of play but his ups and downs could be summed up in a five-minute window. Detroit's goal came on a counter after he was caught waiting on the ball on a change of fields cross by McLaughlin. The visitors intercepted and ran the length of the field for a nicely played goal. Haber made up for his mistake four minutes later when he had a secondary assist on the equalizer, crossing the ball far post to Lasso, who then headed the ball to Welshman to finish. Haber had played in six games but only had 200 minutes coming in.

Nazmi Albadawi: Albadawi returned to action for the first time since suffering a rib injury April 28 at Ottawa, sidelining him for three games. He played 67 minutes before Corben Bone replaced him, and he was immediately checked out by the medical staff and given ice. Playing at the ‘10' position behind the center forward, Albadawi was caught getting sucked back further on defense than he had in his previous three appearances, but he still managed to create three chances and had one shot.