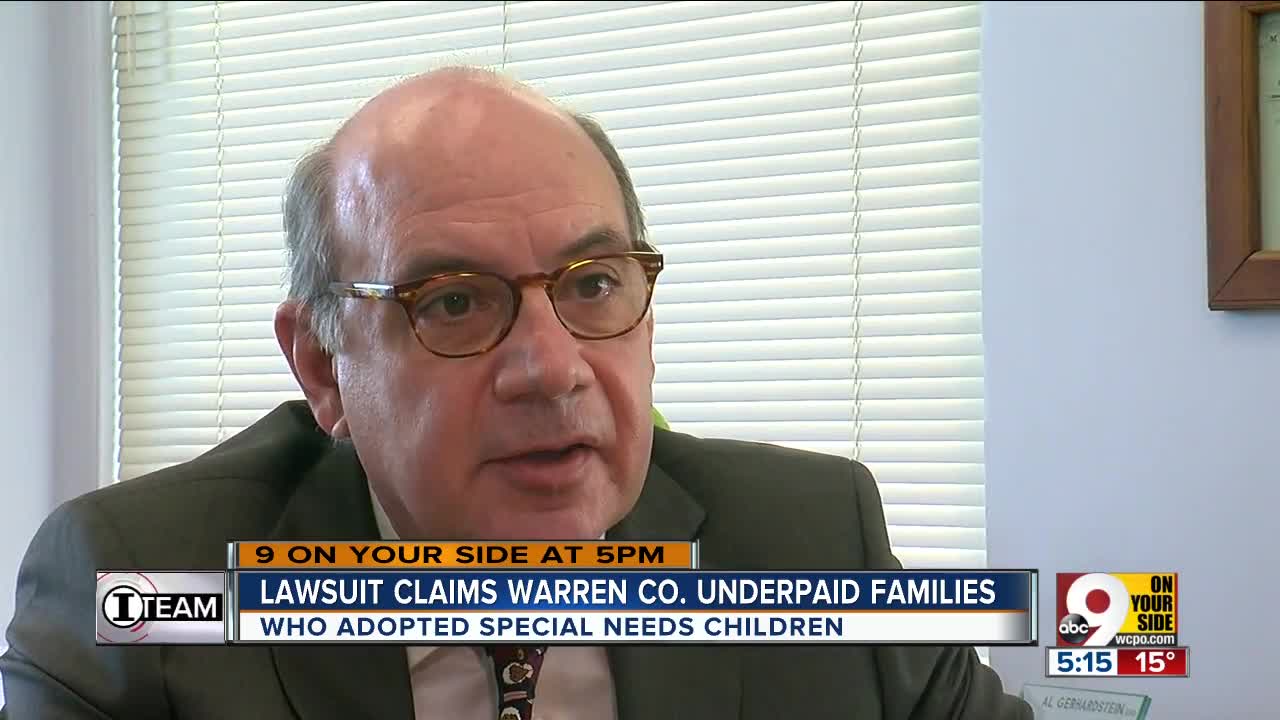 The suit could also expose Warren County to paying millions in back financial assistance – money that attorney Al Gerhardstein says families should have received to help them raise their adopted special needs children but were either denied or told they didn’t qualify for.

CINCINNATI — A federal judge will soon decide whether a lawsuit filed by Warren County foster parents who adopted special needs children can move forward as a class-action case.

“This case is about a group of families who open their homes to special needs children,” Gerhardstein said at a Jan. 21 court hearing. “These families are doing the heavy lifting on the front lines of the opioid crisis … the least we owe these parents is fair treatment.”

The statewide average paid to adoptive families of special needs children is $527 per month. But Warren County paid $176 – the least of any county in Ohio, Gerhardstein said.

If U.S. District Judge Susan Dlott gives the case class-action status, it will allow 160 adoptive families to join the lawsuit.

It could also expose Warren County to paying millions in back financial assistance – money that Gerhardstein says families should have received to help them raise their special needs children but were either denied or told they didn’t qualify for.

“These families aren’t in this to squeeze a few bucks out for themselves and then leave the situation exactly as it was when they came in,” Gerhardstein said. “They want to make sure that all the families secure the relief that they’ve come to know they’re entitled to. And the way to do that is through a class action.”

Under the federal Adoption Assistance and Child Welfare Act of 1980, the adopting families of difficult-to-place children are entitled to compensation for needs such as counseling, medical care and other services.

But Stephen Teetor, an attorney for Warren County, said some adoptive families are asking for tax dollars to pay for new cars, go-kart racing, Disney trips, karate lessons and weddings.

“Things the rest of us would have to pay for out of our own funds and not tax dollars,” Teetor said in court. “If you start to allocate every expense a child has … it’s going to hit the state maximum (for adoption assistance) every time.”

One Warren County woman, who is known in court proceedings as Adoptive Mother #1 in order to shield the identity of her daughter, testified in court last week.

After raising four grown children she and her late husband decided in 2013 to foster a 9-year-old girl who had suffered traumatic sexual abuse.

She received roughly $1,000 per month in financial assistance as a foster parent. After she adopted the girl, those payments dropped to zero, she said.

“We loved her and we didn’t want her to remain in the foster care system forever so we adopted her,” she testified.

A case worker told her she didn’t qualify for financial assistance, she testified.

She told case workers that she wanted her daughter to attend private Christian school, but couldn’t afford it. She believed it would help ease the trauma of her past sexual abuse because was having uncomfortable experiences with boys at her middle school.

“It’s frustrating. I’m not an expert, I don’t know what the laws are and I’m sure there’s a lot of families out there just like us,” she testified.

After she filed the lawsuit, and after her husband died last year, Warren County agreed to pay her $1,045 a month in financial assistance for her daughter, who struggles with depression.

In the wake of the lawsuit, Warren County has also renegotiated the financial assistance that another adoptive family involved in the case receives.

“There’s a lot of gray area when you determine subsidies,” Warren County Children Services director Susan Walther testified. “I want to welcome the families to come back in and renegotiate if they don’t feel as if they’ve gotten what is warranted.”

In addition to paying the lowest adoption subsidies in the state, Warren County also has one of the highest number of cases in which adoptive families were granted zero financial help, Gerhardstein said.

“The defendant’s flagrant failure to provide the assistance … significantly impairs foster children’s chances of permanent adoption in the best suitable home, disincentivizes foster parents who are interested in permanently adopting their foster children, and strains families who have adopted children who are considered special needs,” the lawsuit states.

The judge is expected to rule on the class-action status of the case sometime in the coming weeks.