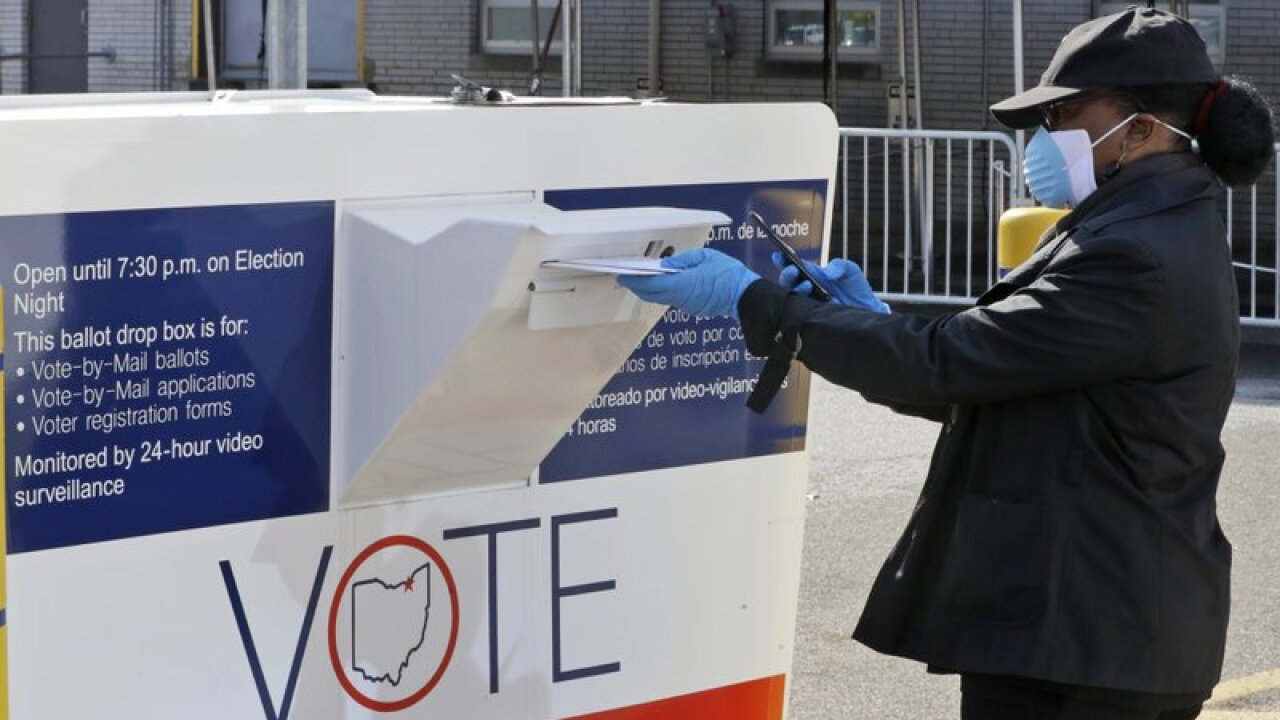 In this April 28, 2020 file photo, Marcia McCoy drops her ballot into a box outside the Cuyahoga County Board of Elections in Cleveland, Ohio. A county judge ruled Tuesday, September 15, 2020 that Ohio Secretary of State Frank LaRose's directive restricting counties to providing just one ballot drop box in November was "arbitrary and unreasonable." (AP Photo/Tony Dejak, File)

COLUMBUS, Ohio (AP) — An Ohio judge has temporarily blocked the Republican secretary of state’s order limiting counties in the critical presidential battleground to one ballot drop box, and the state and Republicans have appealed.

A judge in Franklin County, home to the state capital, blocked the directive Wednesday after Republican Secretary of State Frank LaRose, who oversees Ohio elections, failed to voluntarily respond to his declaration that the order was arbitrary and unreasonable.

The faceoff makes unclear how many drop boxes will be available to Ohio voters just 2 1/2 weeks before voting begins Oct. 6.

Access to ballot drop boxes has become an urgent matter nationally amid the coronavirus pandemic, questions about mail-in voting security and cutbacks at the post office. Urban counties, which tend to favor Democrats, are often the ones seeking to add drop boxes due to their large populations.

Franklin County Common Pleas Judge Richard Frye’s ruling Tuesday derided LaRose’s directive but stopped short of requiring LaRose to change or rescind it. LaRose did neither, leaving the restriction of one drop box for each of Ohio’s 88 counties in place.

The Ohio Republican Party lashed out at Frye as a “partisan judge” and accused him of colluding with fellow Democrats before issuing his decision.

But Ohio Supreme Court Justice Maureen O’Connor, a Republican, rebuked her own party and the comments’ “unsigned authors” and came to Frye’s defense.

“Every one” of Ohio’s 722 judges, 800 magistrates and numerous active-retired judges were dismayed by what she called a “disgraceful, deceitful” attack by the Republicans, she said in a written statement.

“The Republican Party’s statement should be seen for what it is: part of a continuing string of attacks against any decision that doesn’t favor a political end, regardless of party, even if that decision may be legally correct and indeed legally required,” she said.

Both of Frye’s actions come in a lawsuit brought by the Ohio Democratic Party alleging LaRose’s restriction is unconstitutional.

He has said that he personally supports counties adding more drop boxes, but that he lacks the legal authority to expand the number beyond the one set by the Republican-controlled Legislature this spring.

“Secretary LaRose believes the law is clear about the very limited ways that absentee ballots may be returned to county boards of elections under Ohio law,” spokeswoman Maggie Sheehan said in a statement. “Specifically, it states absentee ballots ‘must be delivered by mail or personally deliver(ed) to the director’ of their county board of elections and ‘in no other manner’.”

The single drop box Ohio lawmakers allowed would be located at each county board of elections, while added drop boxes are envisioned to be placed at locations throughout a county.

But Frye said because the word “deliver” is ambiguous in the law, counties must be legally permitted to explore setting up additional boxes.

Shontel Brown, the Democratic chairwoman in Cuyahoga County, home to Cleveland, said at a news conference Thursday that LaRose’s order came “just hours” after the bipartisan elections board there had announced plans to allow six libraries to serve as collection points for completed ballots.