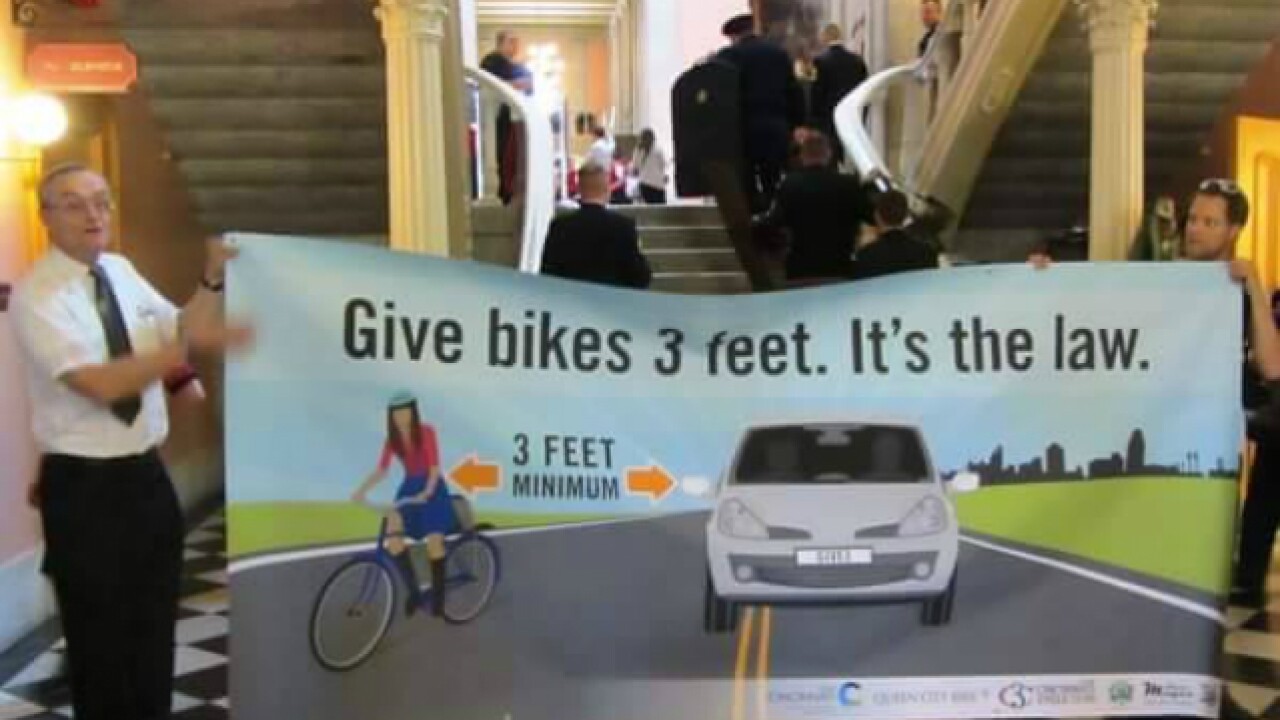 COLUMBUS, Ohio -- Bicyclists in the Buckeye State are about to find the roads a bit bike-friendlier.

The Ohio Senate approved Thursday, by a 30-1 margin, House Bill 154, which will require motorists to pass bicyclists on the road with no less than a 3-foot cushion. Later Thursday night, the Ohio House approved, 88-4, amendments proposed by the Senate, sending the bill to Gov. John Kasich's desk.

The law will fortify four Ohio cities, including Cincinnati, that have already enacted 3-foot passing laws on a municipal level.

IN DEPTH: Can Cincinnati take its safe-passing bike law even further?

"The passage of the 3-feet legislation will help make our streets and roads safer for all users," said Frank Henson, president of Queen City Bike.

Upon Kasich's signature, Ohio will become the 40th state to enact some sort of safe passing legislation, although only 28 currently mandate a specific distance motorists must maintain, according to the National Conference of State Legislatures. Some states employ general "safe distance" requirements, while others are even more stringent than 3 feet, calling for 4-, 5- and even 6-foot cushions.

Ten states, including Kentucky and Indiana, have no passing requirements enacted into law, although Kentucky's General Assembly was considering a 3-foot safe passing law during its regular 2016 session last winter. That bill, Senate Bill 80, passed out of the Kentucky Senate but failed to get out of the House Transportation Committee before the 2016 legislative session concluded.

Currently, the Kentucky Transportation Cabinet recommends a 3-foot cushion, but the recommendation has no legal support behind it.

There's some debate as to how much safer roads become for cyclists after 3-foot passing laws are enacted.

COLUMN: Why controversy around protected bike lanes is a good thing

As WCPO has previously reported, the problem isn't that they don't make roads safer. It's that no one's really sure, at least when it comes to hard data. That's not because no one's collecting the data, but because most authorities agree that the laws are hard to enforce. One study, out of Rutgers University, listed "difficulty of enforcement" as the laws' top limitation.

Ohio attorney Steve Magas, who has made a career out of representing cyclists in criminal and civil cases, previously told WCPO that 3-foot laws can be thought of as less an enforcement tool and more a marketing strategy.

"Having the 3-foot law helps... maybe not in writing tickets, but more so in promoting cycling and giving everyone an awareness that, 'Hey, these folks are allowed to be out there. Give them a few feet to pass.' It's almost as much a marketing tool for safe driving as it is a law," he said.

The bill also includes a provision allowing vehicles -- bicycles, motorcycles and cars alike -- to proceed through an intersection after coming to a full stop and yielding right-of-way, when not detected by a device meant to move the traffic signal from red to green.